Home How to How to restore neglected cast-iron pans

How to restore neglected cast-iron pans 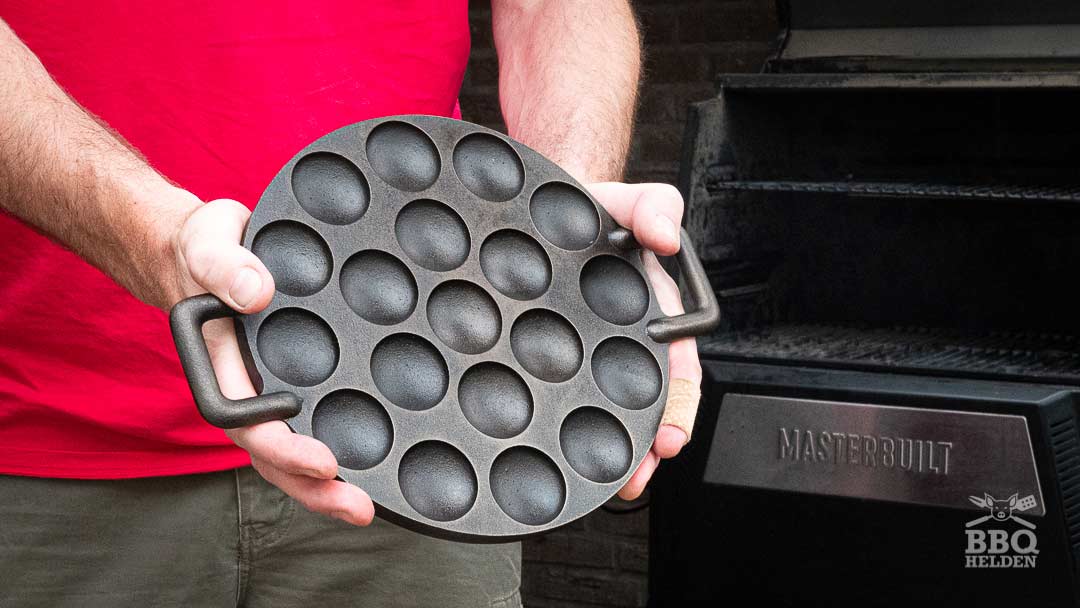 If like us, you regularly use cast iron pans. You know how important a good layer of seasoning is. This coating ensures that the cast iron does not rust and you have a non-stick coating. The maintenance of a cast iron pan is not that difficult as it looks. After use, just clean it with hot water and soap and apply a new layer of oil if necessary. 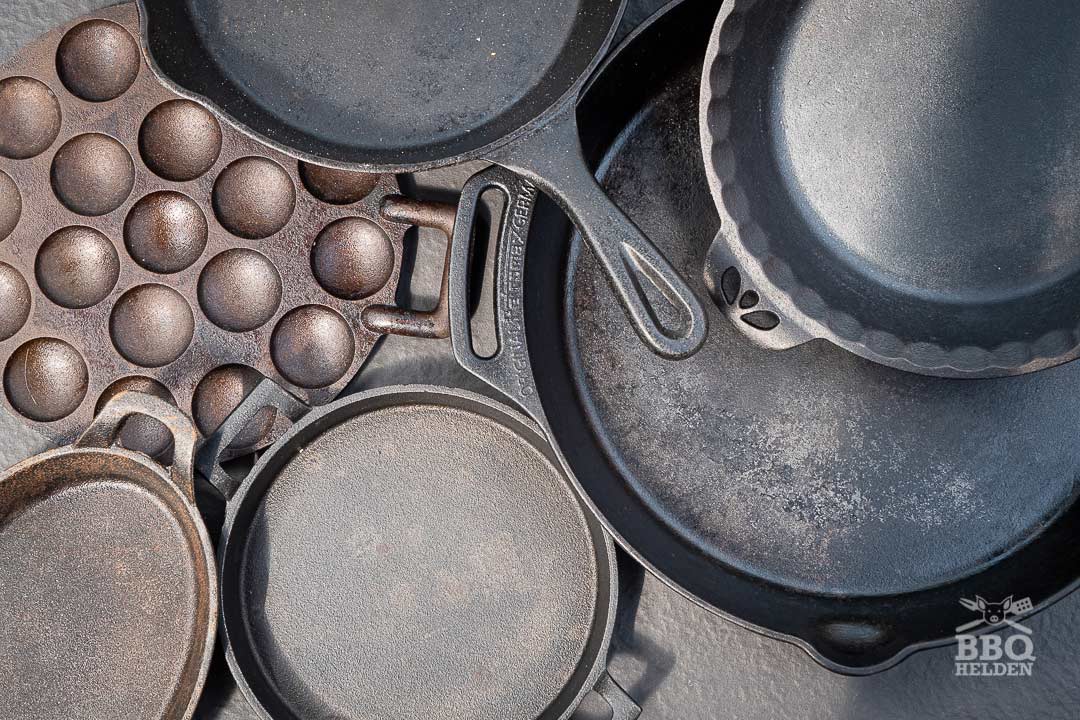 But what should you do if the coating is so damaged or rusty that it’s better to start all over again? We got a very nice antique cast iron poffertjes pan that needed some love. For all you non-dutch viewers, a poffertjes pan is a thick cast-iron plate with 5 cm round dimples in it. In those dimples, we cook small puffy pancakes called “poffertjes”. Now you know.

The dark brown layer on this poffertjes pan was no longer really a hard coating but a thick layer of dirty grease. Although the fat protected the pan from rust, it was not really sanitary to cook in.

We decided to make the pan completely bare and to season it with a nice new coating. And while we’re at it, we grabbed the rest of our cast iron pans that could use some extra care. Some pans had a thin layer of rust, and other pans started to run a little bare. It was high time to do something about it.

How to remove old seasoning from cast-iron

Old seasoning can easily be removed with a steel sponge. As long as the layer is not too thick, you will have a bare pan in a few minutes. If the coating is still hard, you can choose to leave it on or spend a few extra minutes on it. 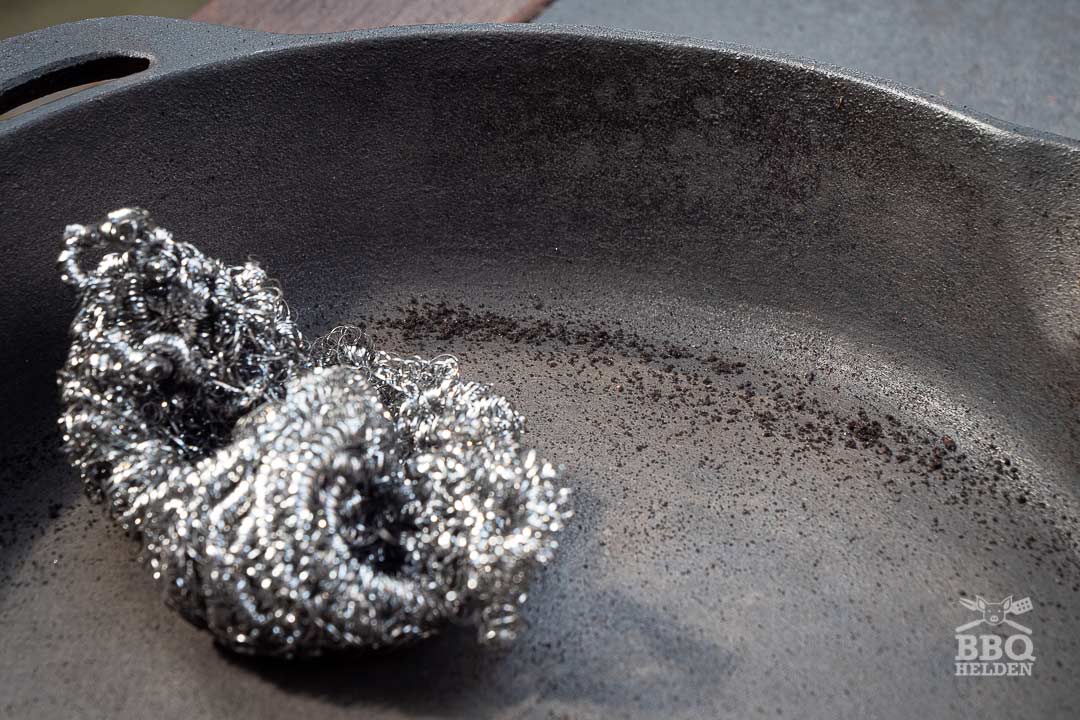 We prefer to be in control of the process ourselves and putting in some elbow grease. We first remove the first layers of coating, old oil, dirt and rust with a brass wire brush. A brass wire brush is hard enough to remove the baked-on mess without damaging the harder cast iron. It may help to heat the pan slightly so that the dirt and grease soften a bit. 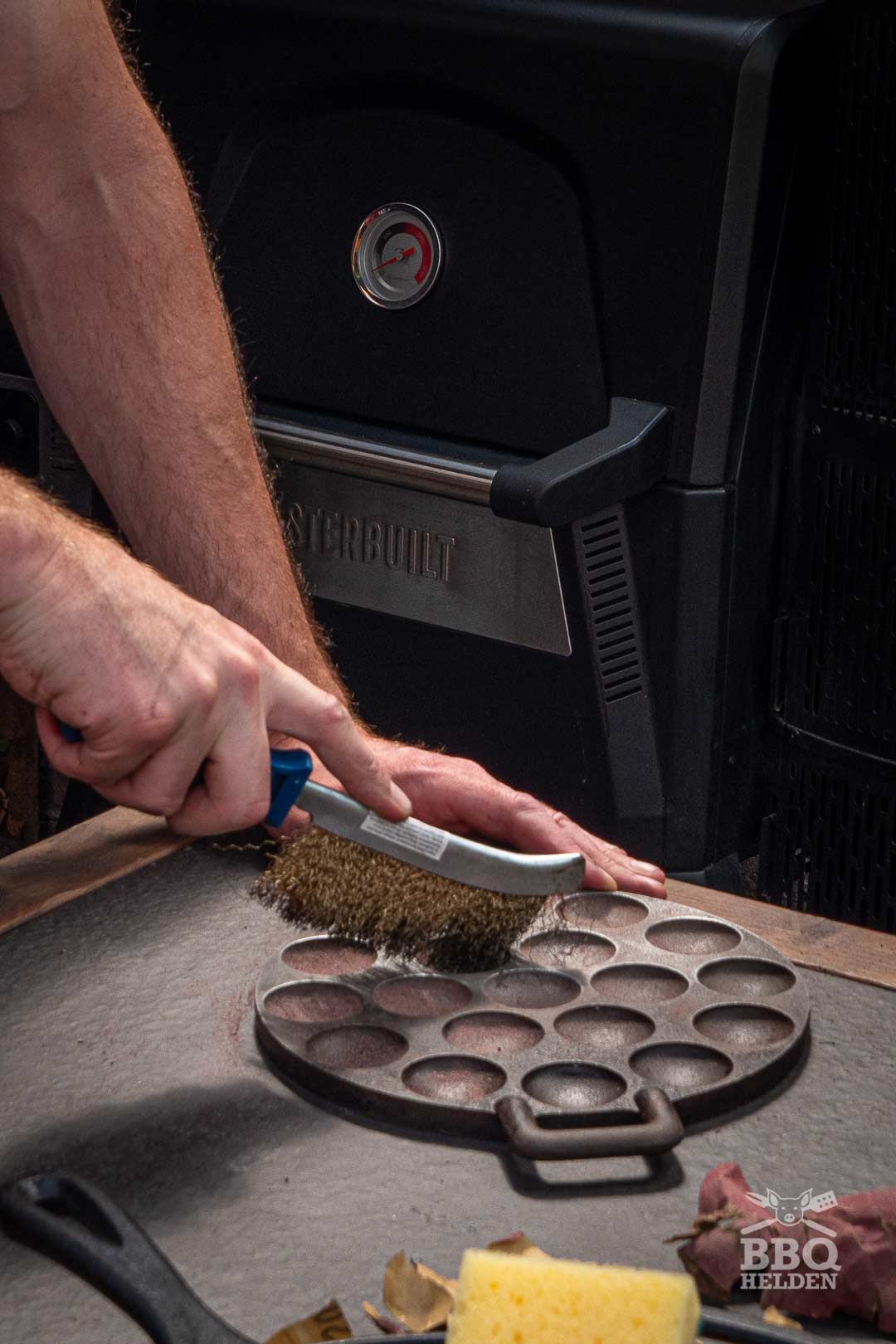 Then we use sandpaper for sanding the cast iron completely bare. It takes some effort, but it’s all worth it. If the pan is completely devoid of rust and you only see a grey metal layer, rinse the pan thoroughly under running water. Then dry it well and heat the pan until all the moisture is gone. If you wait too long with this, you will see rust forming within the hour, and you can start over. 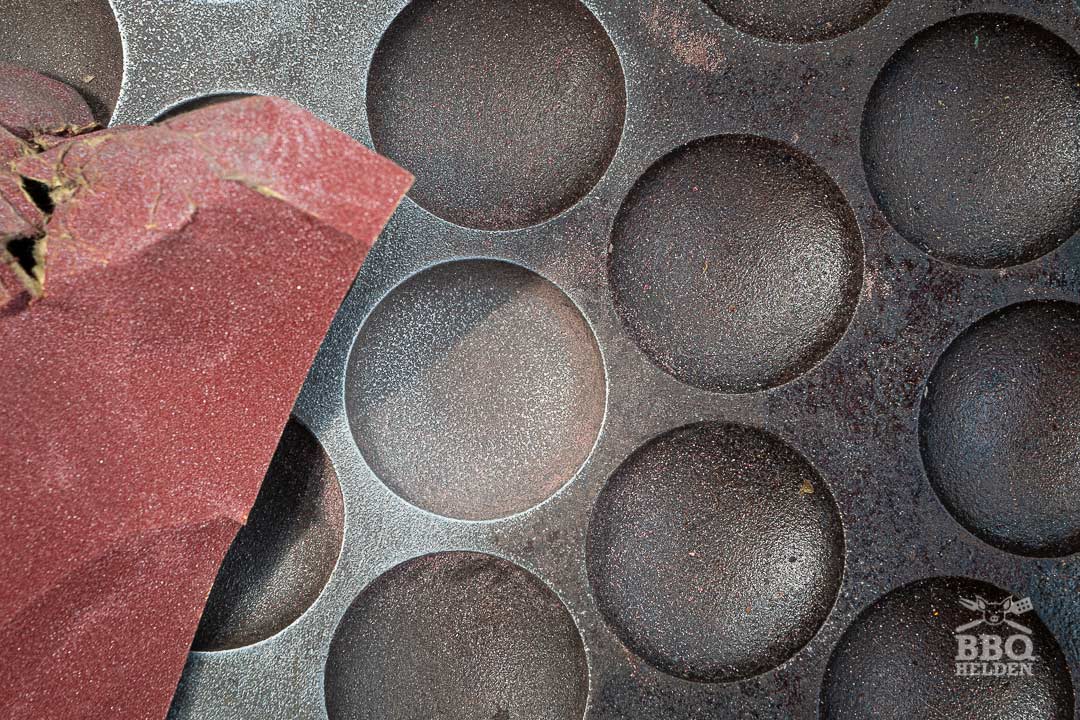 How to season cast iron?

You sometimes hear that you build up flavour every time you use a cast-iron pan. If that’s the case, you know that the seasoning is not hard enough, so that the fat from the dish ends up in the coating. This fat will melt the next time you use the pan. That old fat then gives its flavour to the recipe you are preparing at that moment. You might like this idea, but it makes us a little nauseous.

We have found that clarified butter, or ghee, works very well for seasoning cast iron. Clarified butter is butter whose solid components are separated from the fats. That way, you only have pure fat left. That fat has a smoke point of about 250°C (480F). A lot higher than regular butter or the vegetable oils named earlier. This gives you a nice hard coating that can withstand higher temperatures. You can safely bake pies in these pans without tasting last week’s steak.

Using vegetable oil with a lower smoke point also has an advantage. Because most ovens do not get hotter than 250°C (480F), you cannot season cast iron in these ovens with oils that have a higher smoke point. We season our cast iron cookware outside in the smoker because it can get much hotter. 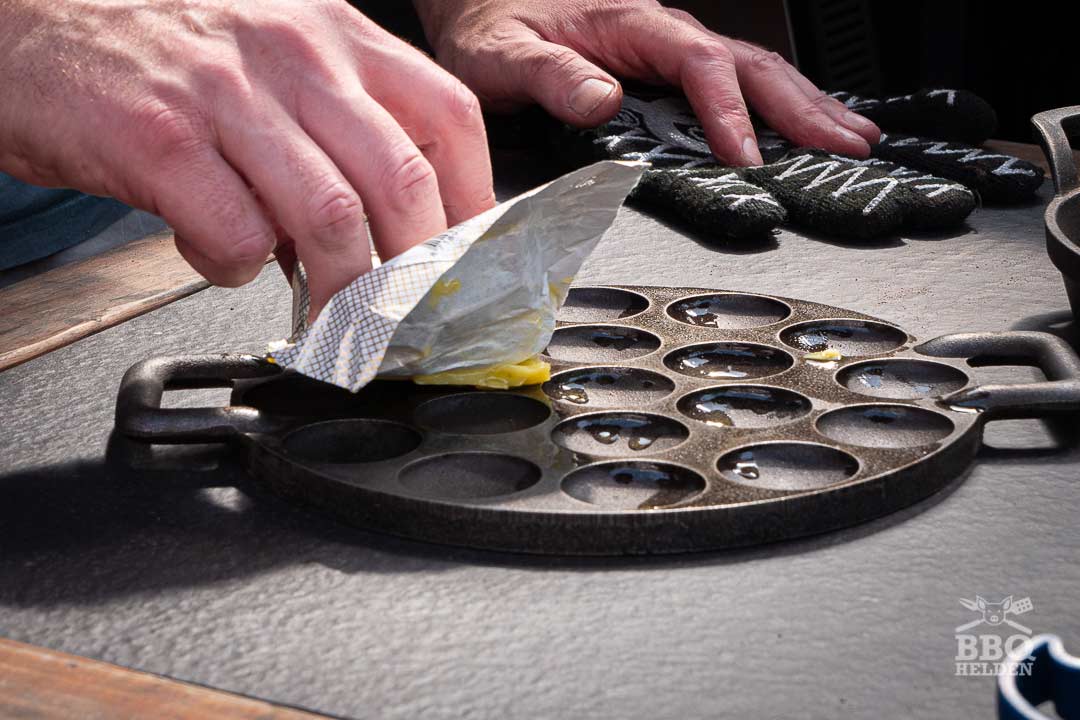 If you have greased up the cast iron, you will remove most of this oil. Take a piece of paper towel and remove the oil until only a thin, barely visible layer of fat remains. The thinner, the better. Properly seasoning cast iron is a matter of applying several thin layers.

If you heat this thin layer of oil above the smoke point, a chemical reaction takes place. We call this reaction polymerization. If you heat oil above its smoking point, the fat will decompose. This creates new connections that attach themselves to the underlying material. The thinner the layer, the faster this happens and the harder that layer becomes. So it is better to apply several thin layers than one thick layer that never gets completely hard. 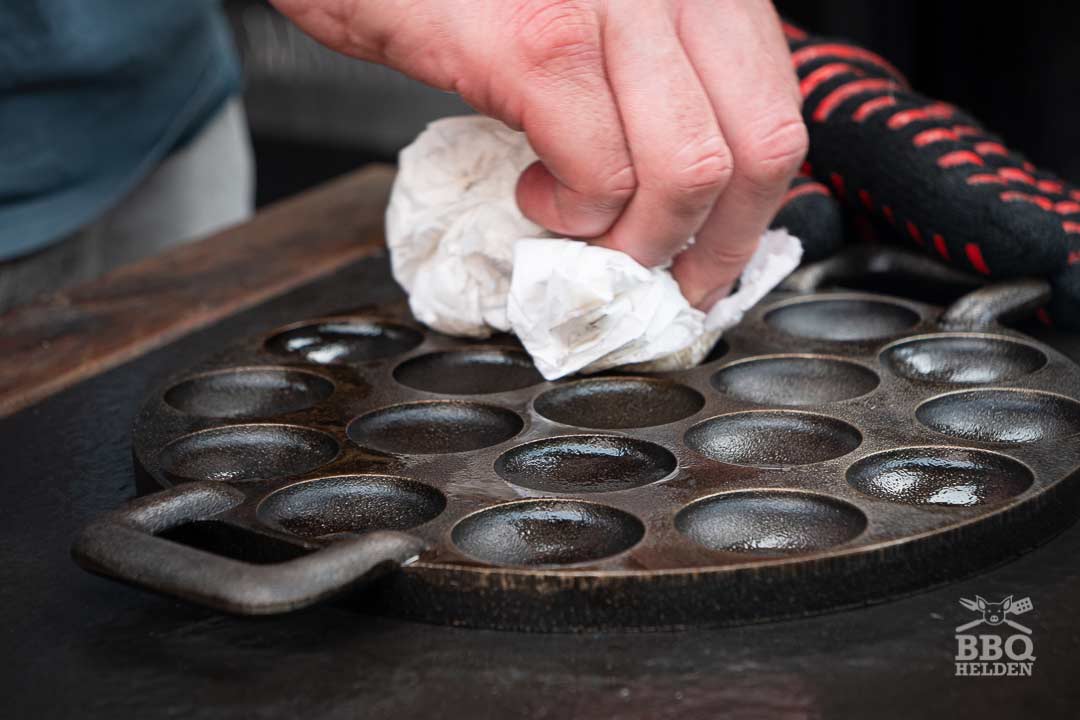 At what temperature do you season cast iron

As we said, each type of oil or fat has its own smoke point. For most oils or fats, this is between 160 and 200°C (320 to 392F). So first, find out the smoke point of the oil you are using and then set your oven to a temperature about 20 degrees higher. Not much higher because after the smoke point comes the burning point, and then all your hard work is for nothing. Fat or oil that burns turns into ash and can be wiped off or taint the coating. 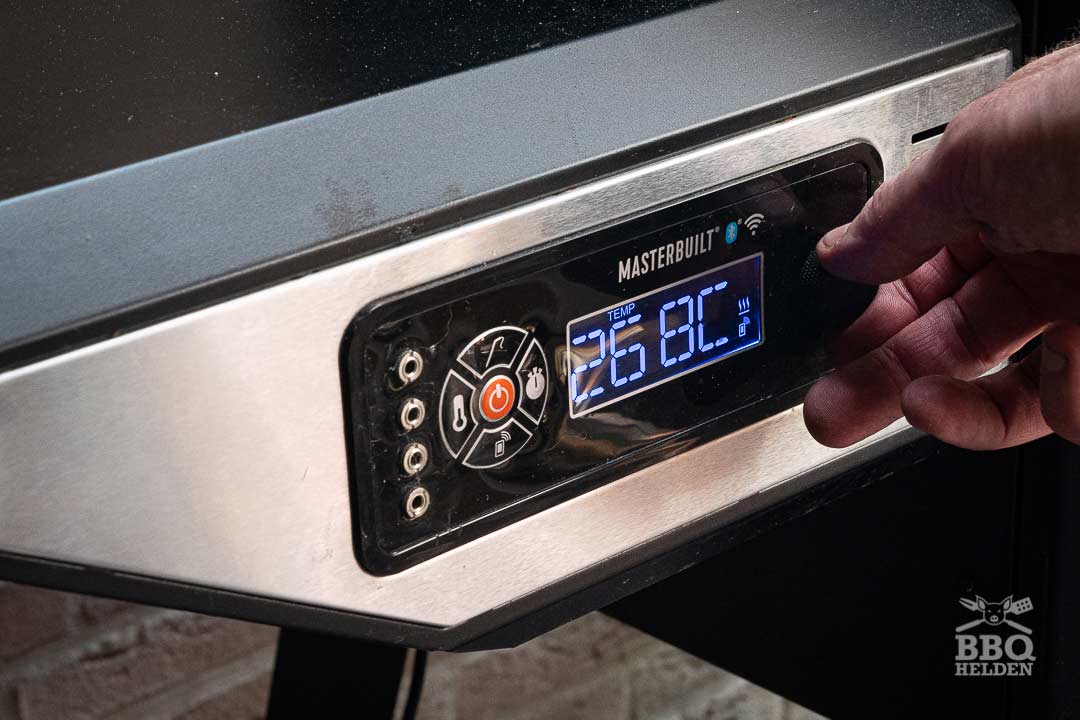 Our clarified butter has a smoke point of 250°C (480F), so we set the smoker to 270°C (518F). Then we wait until the smoker reached the right temperature. Some smoke can come from the charcoal at lower temperatures, which settles down on the still soft layer of oil, making it dirty.

We place the pans upside down in the grill so that the fat that may have been applied too thickly can run out. We leave the pans like this for 20 to 30 minutes. We warned the neighbours that it could start to smell a bit so they could close the windows and bring in the clean laundry. A good relationship with the neighbours is worth a lot.

That stinking smoke is also the reason that we no longer season our cast-iron indoors. One pan was still okay, but with several pans simultaneously, you had that foul smell of the smoke for days in the house. That smoke is also poisonous, so you know. 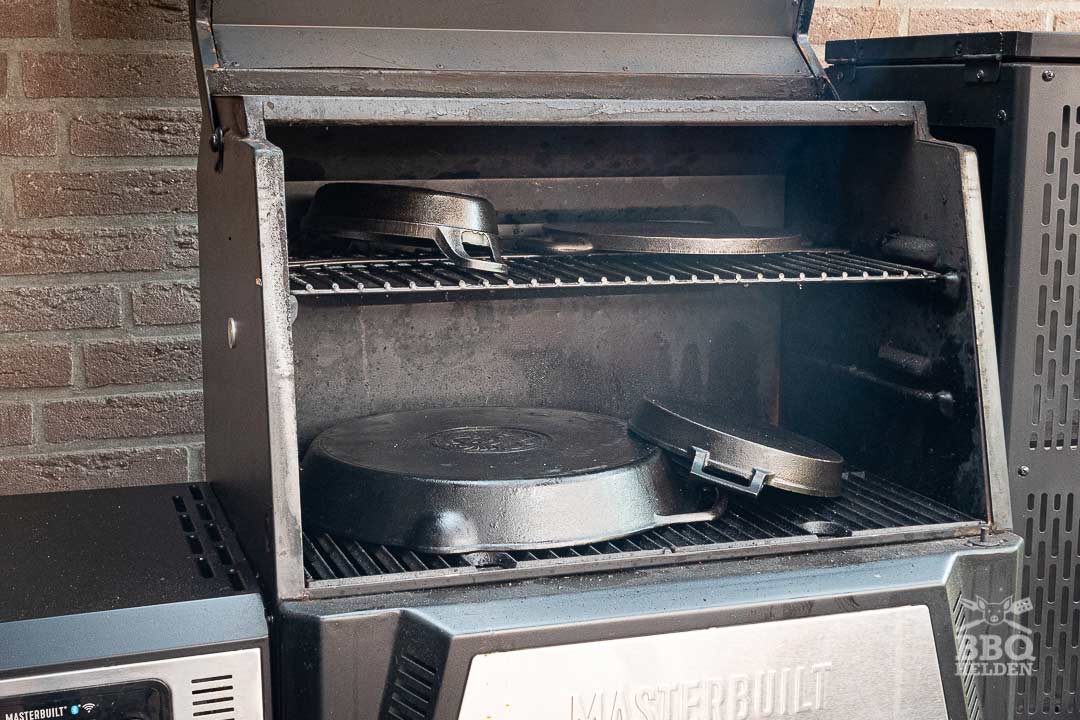 How many layers of seasoning do we apply

On bare cast iron, we apply at least six layers of seasoning. The whole process, including cleaning, can take as much as 3 hours. It’s an excellent job for a free afternoon. Maybe you can cook something delicious on another grill to hide the bad smells. Make some more to give to your neighbours who had to sit in that foul air that same afternoon.

With the skillets that were in a better shape, we pay close attention to when the layer is nice and even black and has a slight shine. Then you know that you are done. An extra layer never hurts. 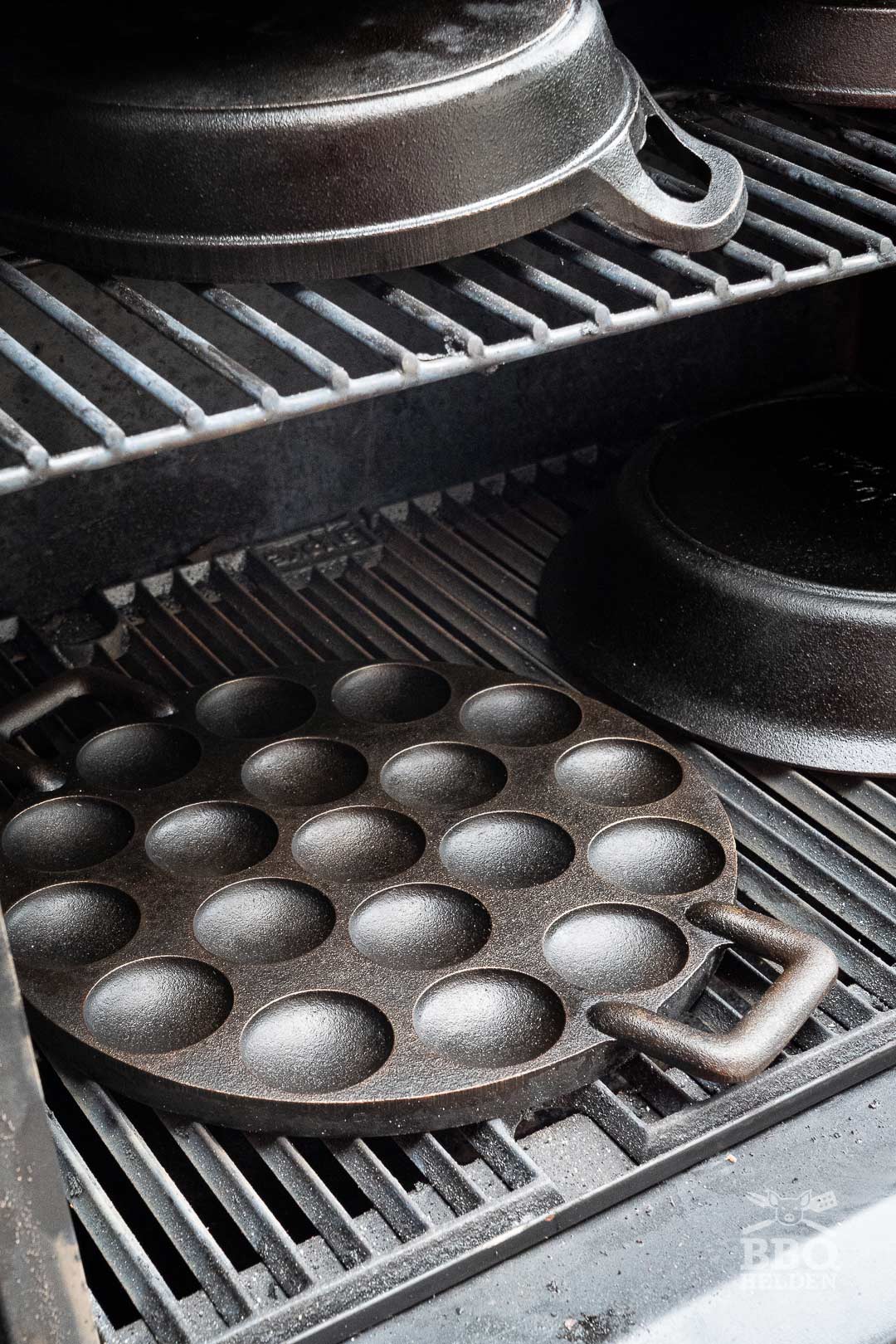 When your pans are black, and there is no more soft fat, you’re done. All you have to do now is use the pan a lot. The only thing to remember is that if you prepare fatty dishes, the coating remains intact. If you prepare more acidic dishes with, for example, tomatoes, the coating will be affected. Don’t be afraid that the coating will disappear immediately, but it never hurts to provide the pan with an extra layer of seasoning following the above steps.

It’s also a good idea to grease the pan a little when you store it. But only if you use the pan regularly. That fat protects the pan against rust, but it also becomes rancid if left in place for too long. That fat does not create a hard coating because you do not heat the oil above its smoking point.

If you go and season your old cast iron pans and skillets this weekend, let us know in the comments below. Or better! Take a photo and post it on Instagram. Tag @bbq.heroes so we can see what you made.