Masterbuilt was at the Spoga in Dusseldorf Germany, in 2020 with a gravity-fed charcoal smoker. Nowadays, gravity fed smokers are certainly not new and have been used for years by professional barbecue enthusiasts during competitions and catering, but this was developed especially for the consumer market.

What is a gravity feed smoker

The principle of a gravity feed smoker works as follows. A column, or hopper, of charcoal, is lit from below. Because the hopper is closed at the top, you have a very controlled combustion where the heat can only escape at the bottom. 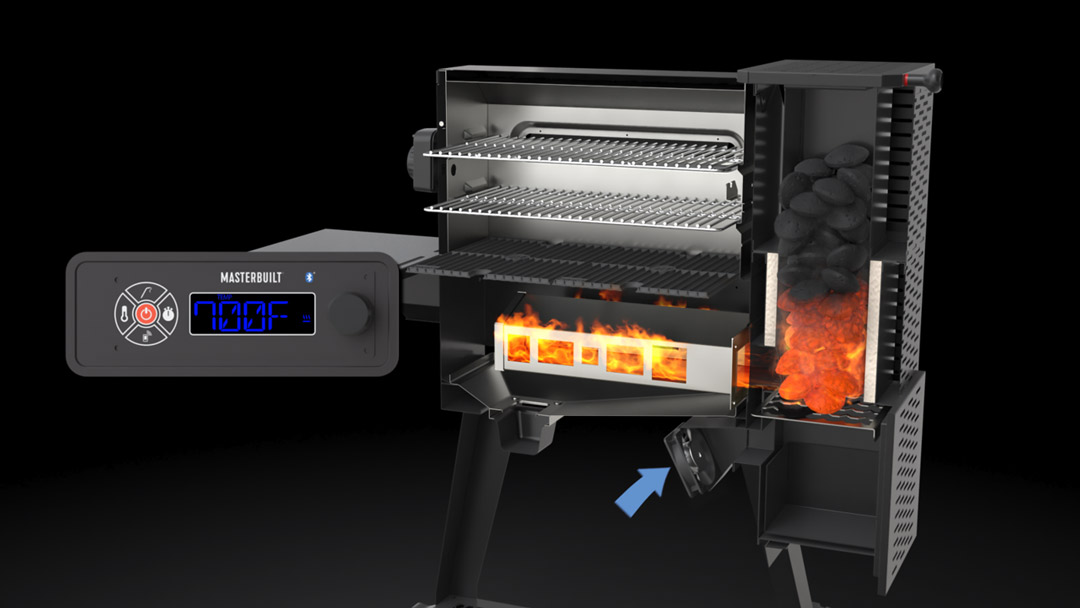 The heat from the glowing charcoal is sent from below by a fan and led into the boiler. The fan is again controlled by a thermostat that gets its information from a thermometer in the kettle.

In the past, these smokers were only used by the professionals or fanatical backyard barbecues because of their price. The prices of these smokers are generally somewhere between 3 and 13 thousand euros. 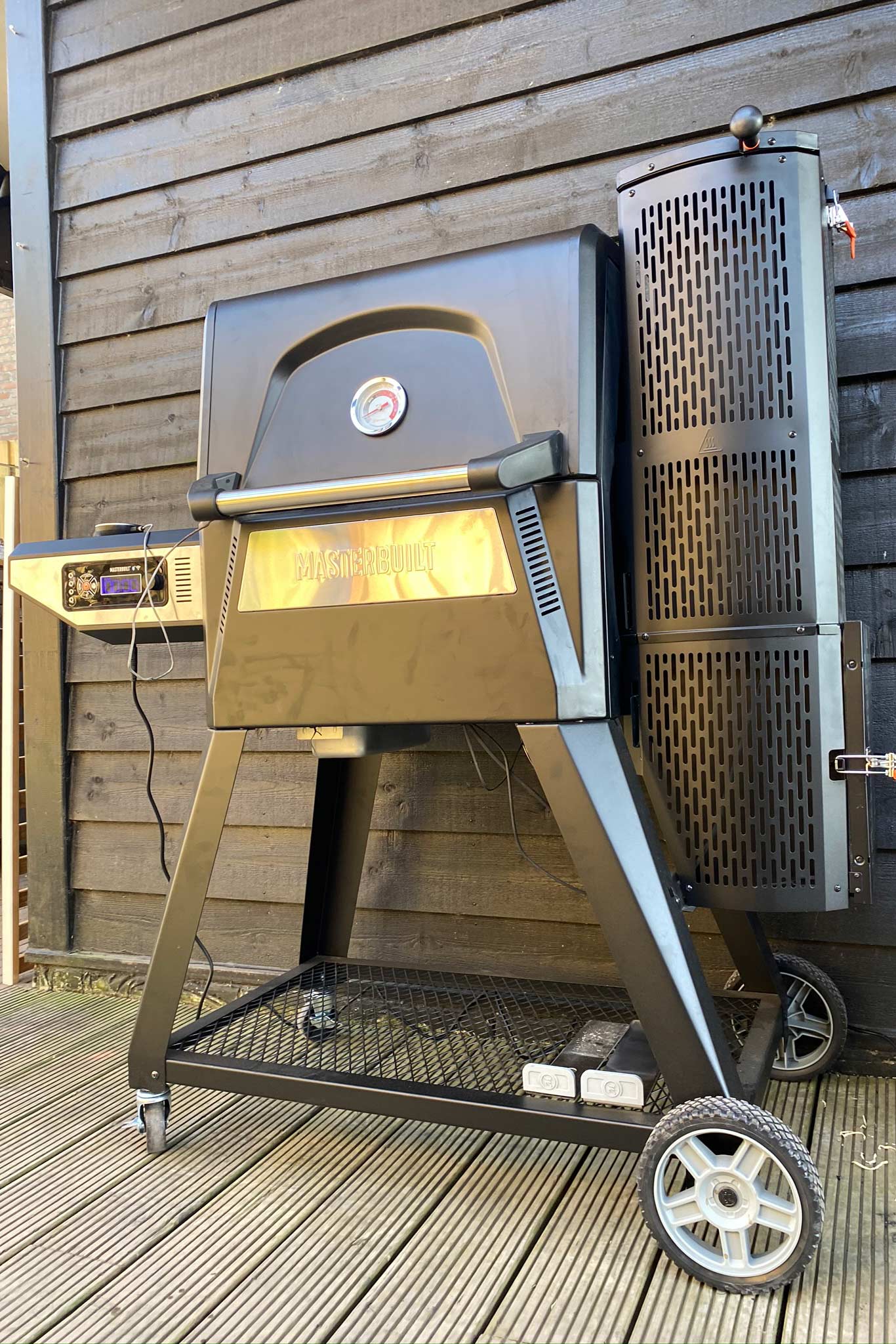 But then Masterbuilt came with the gravity series. Easy to use, a lot smaller and reasonably affordable. The Series 560 costs around €800 in the Netherlands.

Over the course of several days, we prepared a lot. From salmon and spareribs to sausage and pig wings. These are our findings.

What is the Masterbuilt gravity Series 560

At first glance, the barbecue does not seem very big, but you still have a grid surface of 3600cm². You can undoubtedly fit four large spare ribs in there. If you put the ribs on their side with a rack, you can put on a lot more. The bottom two grids are made of cast iron. The top two grids are of enameled stainless steel. 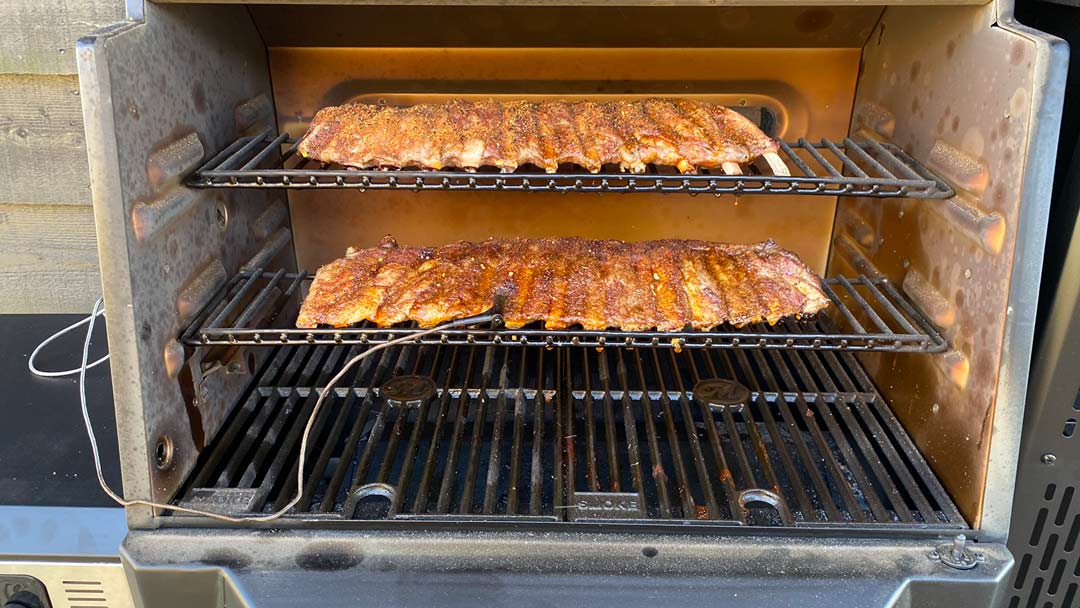 If you remove the top 2 grids, you can easily place three beer can chickens. Or with a little less ease, we also see five disappear in there.

The smoker has four wheels, two of which are steering. The steering wheels are a bit small and do not roll very well on an uneven surface, but for that, you have two larger wheels on the back. If you lift the smoker by the side table, you can roll the grill anywhere.

The Masterbuilt in use

Starting up the Masterbuilt grill is not very difficult. You first light a firestarter under the charcoal. Then you set the temperature, and the smoker does the rest. In about ten minutes, you are up to temperature. 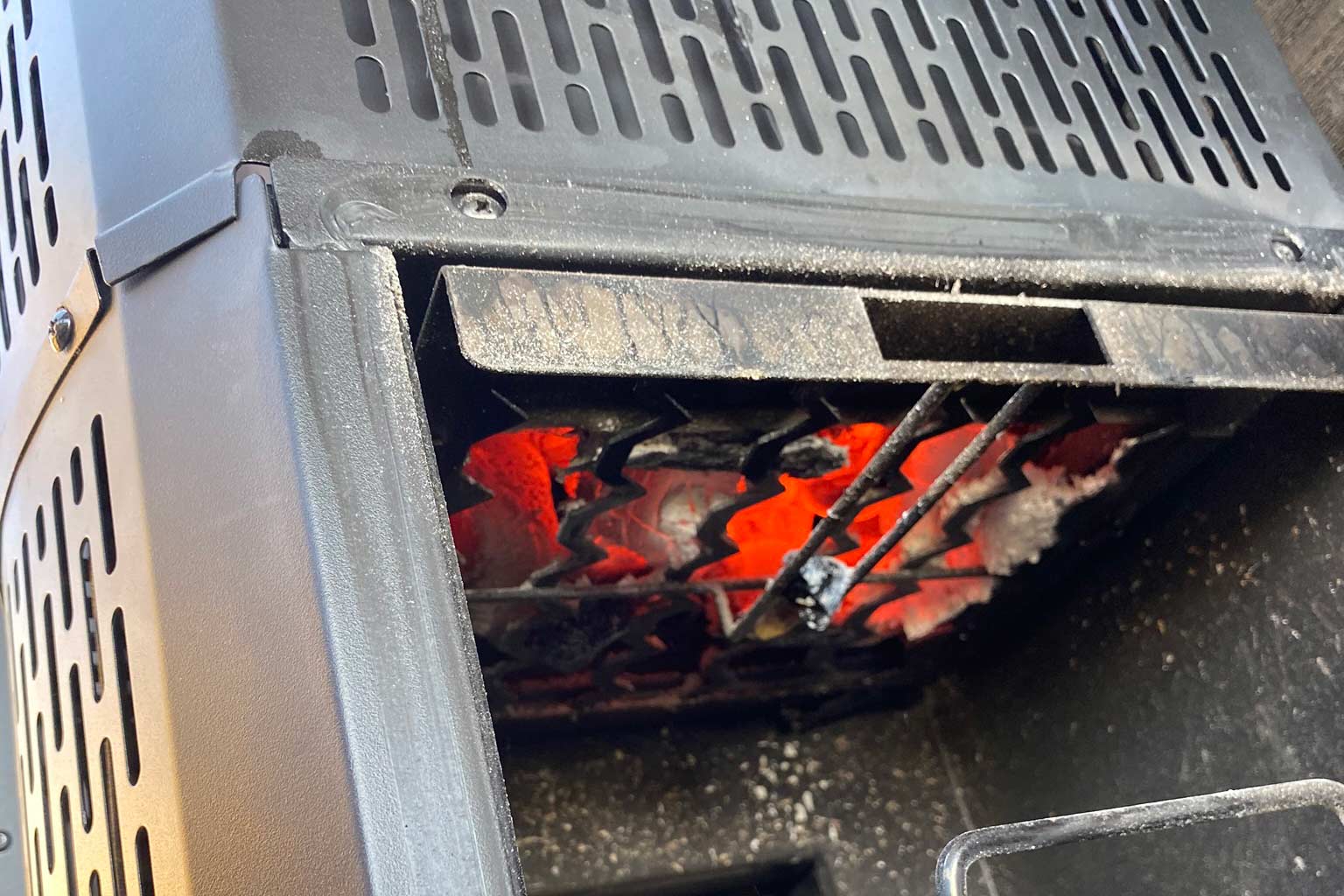 You don’t have to worry that all charcoal gets lit as in a briquette starter. The top is closed, so the heat cannot go up, and the easiest way out is down into the kettle. Check valves prevent the heat from the glowing charcoal from reaching the fan.

The control of the Masterbuild 560 is also straightforward. Set the temperature, and that’s it. If you want more functions than that, you can do use the app on your phone that connects to the barbecue via Bluetooth or WiFi. The latter is undoubtedly attractive because the app also has a cloud function. So you can monitor everything from your phone wherever you have an internet connection. 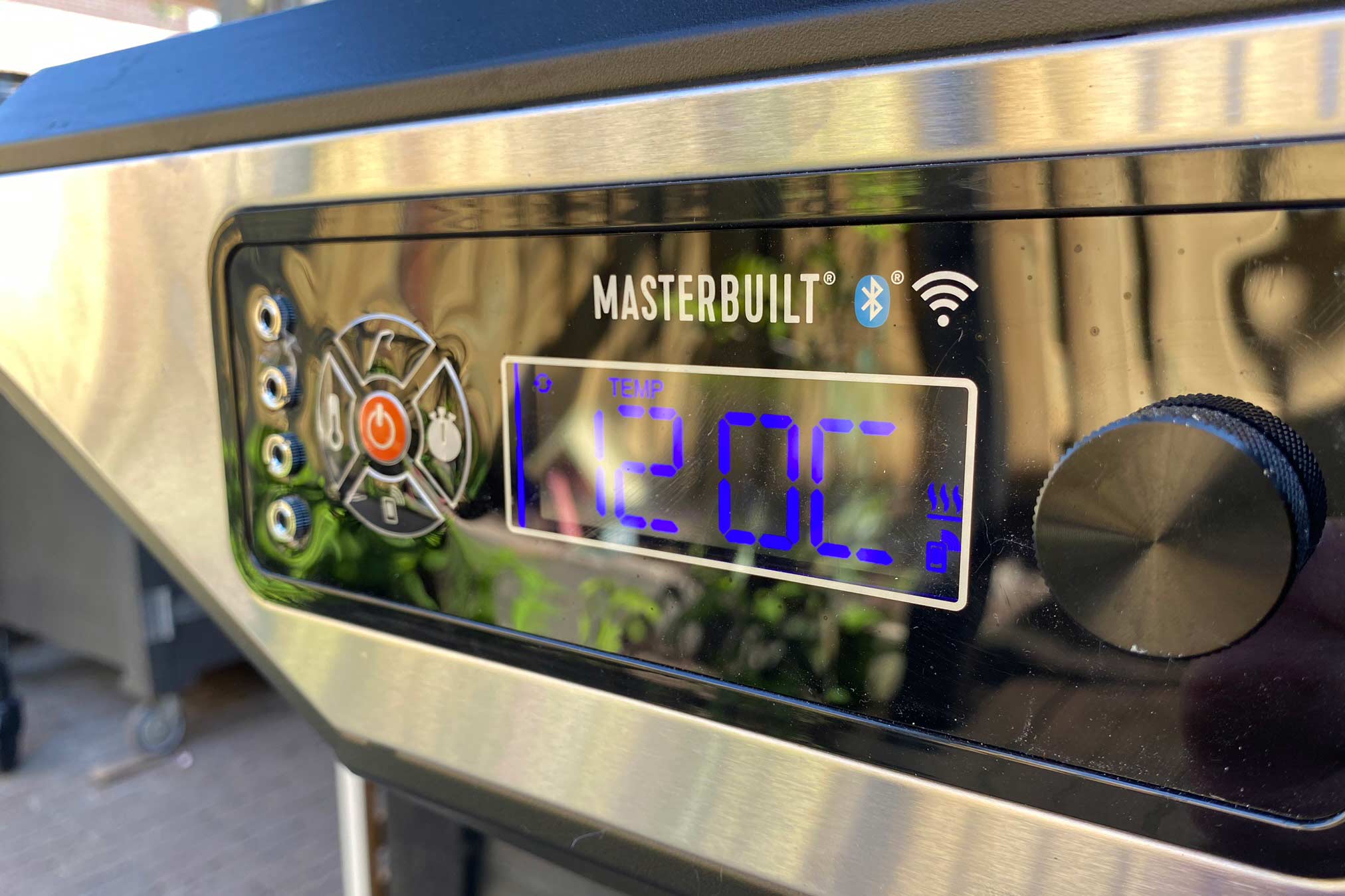 Temperatures of 70 to 370°C (150 to 700F) are achievable. So low and slow, very low, but also full-on grilling. According to Masterbuilt, you can grill for about 15 hours with a full hopper of briquettes. Then you are talking about low and slow. If you are going to cook at a higher temperature or use charcoal, you will go through it a little faster. But if you need extra fuel, you refill from the top.

The smoker accepts both charcoal and briquettes. That is great because they are widely available.
And the temperature is more stable with briquettes than with charcoal. Maybe this is because briquettes have the same shape. 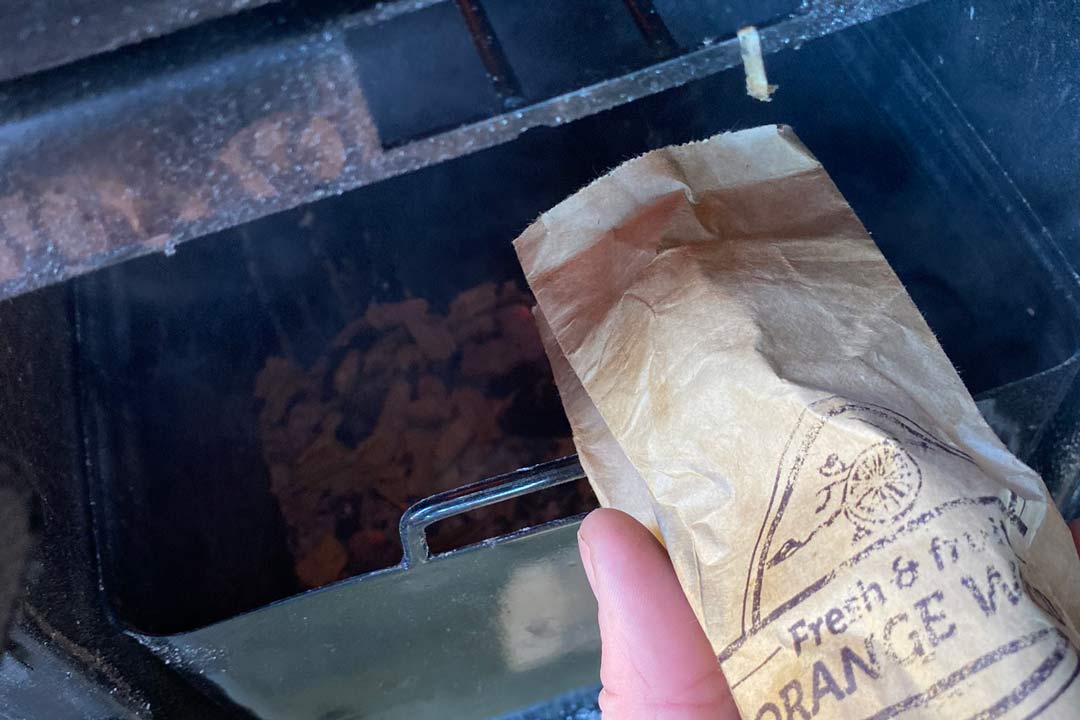 They call these grills smokers because you can smoke with them. You do this by throwing some smoke wood between the charcoal. You can also throw some smoke wood chips in the ash drawer for more smoke control.

You control the amount of smoke yourself by placing more or less smoke wood. The smoke is therefore not dependent on the heat as with a pellet smoker. If you want to quit smoking, you can easily remove the wood.

In contrast to a pellet smoker, a gravity-fed charcoal smoker is much less sensitive to technical problems. It would be best if you emptied a pellet smoker when you are not using it. The wood pellets are very sensitive to moisture and expand so that the worm wheel can get clogged. 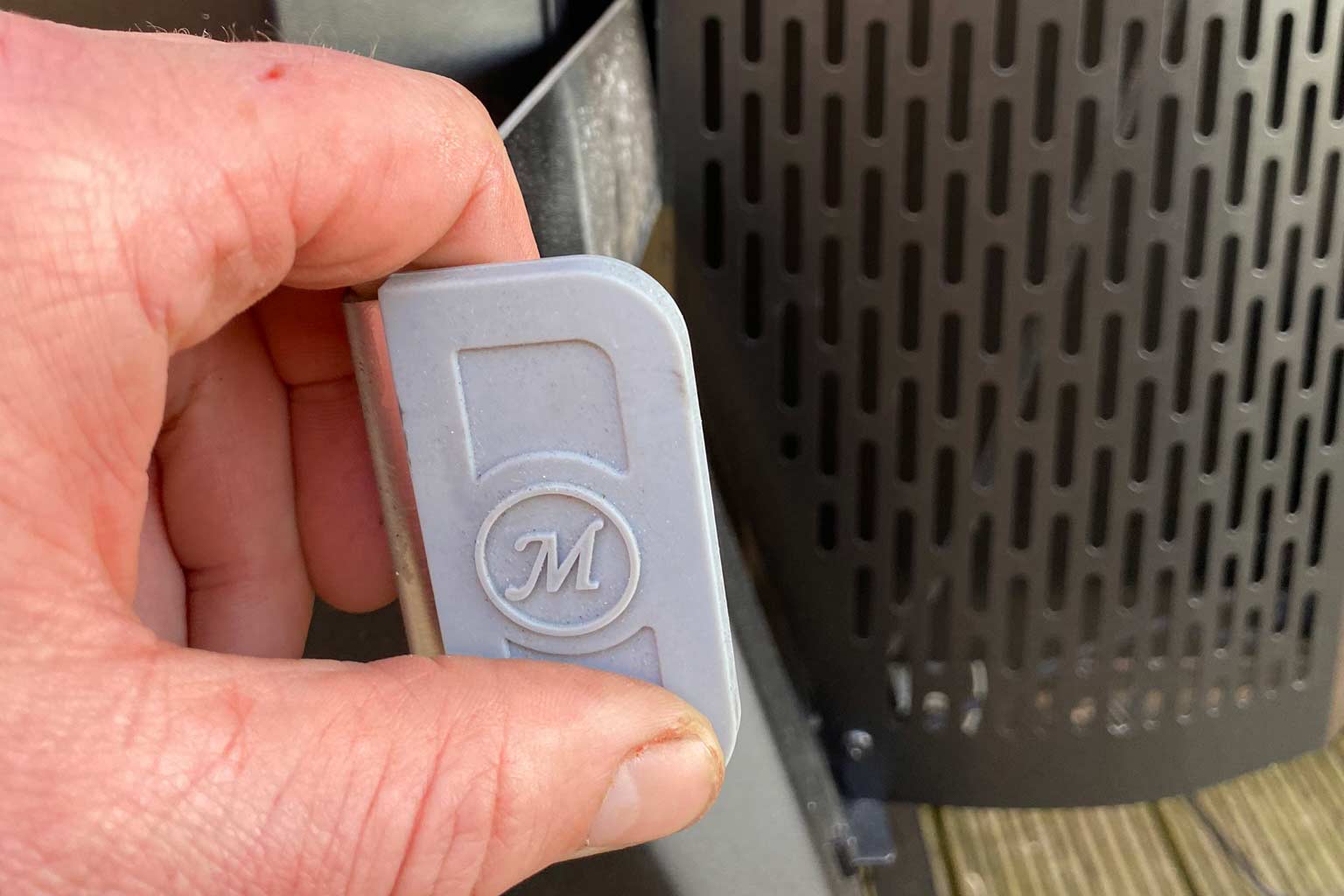 You also don’t have to worry about a grease fire because the fuel and the ash remain separate from the kettle. The grease drippings from the meat are collected under the grate in a dripping pan that you can easily remove for cleaning. The ash from the glowing coals is also neatly collected in a large container that you do not have to clean after every grilling session.

What do we think of the Masterbuilt gravity series 560

Apart from a few errors during startup, the Masterbuild worked fine. These errors occur with more users. The error is gone when restarting. Not insurmountable, but annoying. These errors will hopefully be resolved quickly with updates, and we will assume that for the time being. 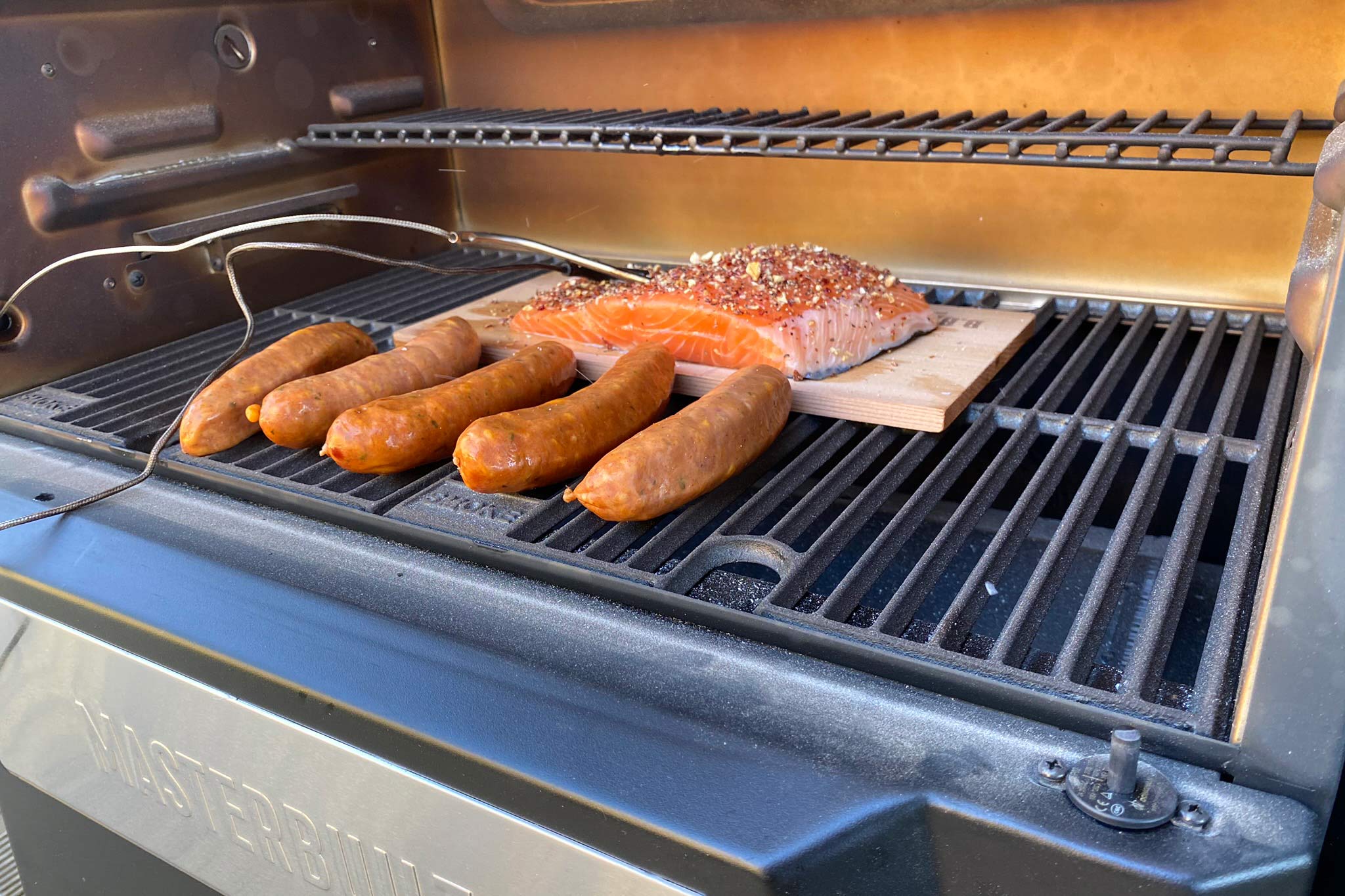 The Masterbuilt 560 works as smoothly as promised. We think that this barbecue is made for the barbecuers who know that they can barbecue well enough but would like to be busy with the recipe instead of keeping an eye on the fire. We are curious about how this smoker will develop further.