Review Billows and Signals from Thermoworks

Thermapen.nl asked us to try out the Billows and Signals from Thermoworks. The Billows is a fan that regulates the temperature in the barbecue by blowing oxygen into the kettle. He doesn’t just do that of himself. He gets the signal to blow from the Signals thermometer.

The Billows can be connected to any popular kamado and with a little tinkering to any other kettle barbecue. So it also works perfectly on a Weber Mastertouch or a water smoker. The only requirement is that the grill must have a lid.

The Signals is one of the best thermometers from Thermoworks. The Signals has room for 4 probes, BlueTooth and WiFi. With BlueTooth, you have a range of somewhere between 20 and 25 meters (65 to 80 feet). That is generally fine at home. The WiFi connection makes it really interesting. Because the Thermoworks app has a cloud function, you have contact with the thermometer wherever you have an internet connection. 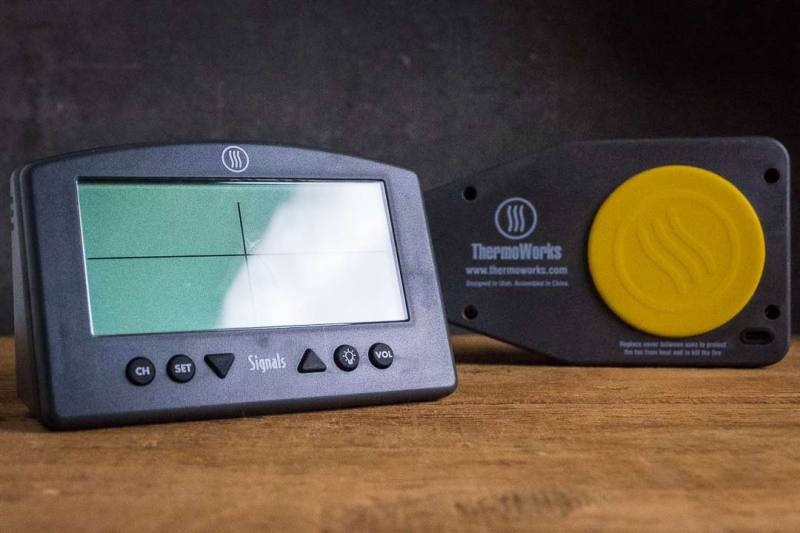 It is also very nice that the Signals has such a large screen. With most cheaper thermometers, you see small screens where you click on buttons to see the different temps. With the Signals, you can see all temperatures very clearly at once. Next to the temperatures, you can write with a maximum of 4 letters what is on the other end of the cord.

The Signals also works without an app. Sometimes you just want to take a quick look at the thermometer to see if it is going well without having to take your phone out of your pocket.

The app displays simple graphs that you can bring out during dinner to relive your whole barbecue adventure. We do not do much with the charts ourselves.

Unboxing the Signals and Billows

Both the Signals and the Billows are delivered with everything you need. 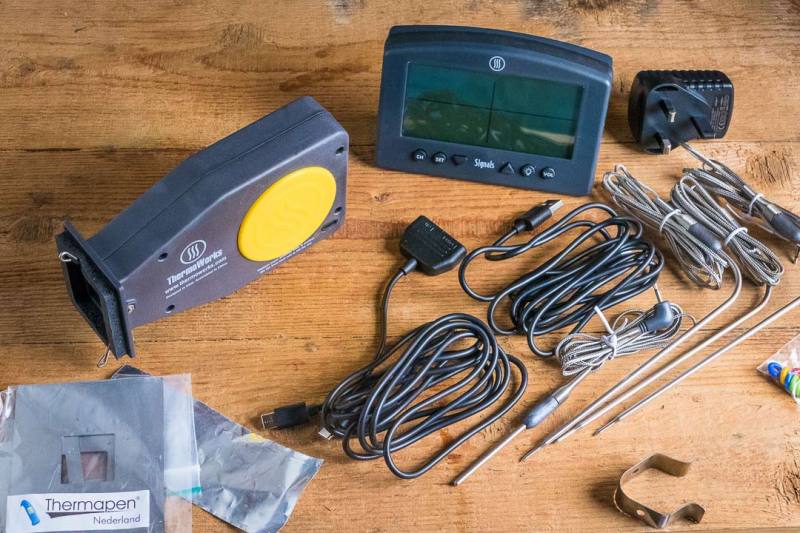 The package of the Signals contains the following:

The Billows comes with the following:

Setting the WiFi and Firmware update

Before you can use the Billows withe the Signals, the firmware had to be updated. The moment you present the Signals via Bluetooth to the Thermoworks app on your phone, it immediately asks for a WiFi connection. 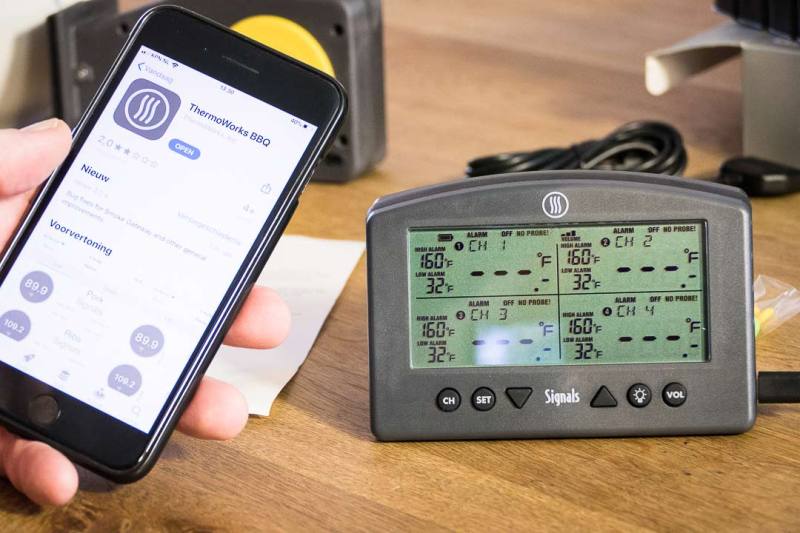 Fortunately, you can enter the password via the app. That saves a lot of pain with the buttons on the thermometer. Then the app indicates that a firmware update is ready. You agree to the update, and then you see that a bar is being filled.

How does the Signals and Billows combination work

To test the Billows and Signals combination, we got a massive piece of meat. 13 pounds of Boston Butt. We want to transform it through low and slow smoking without packing into a nice amount of pulled pork.

If we do not pack the meat, the meat must go through the so-called zone or stall where the core temperature no longer rises for hours due to the evaporation of the moisture on the surface of the meat.

For this to come to a successful conclusion, the temperature in the barbecue must remain very stable. Then the core temperature will eventually rise again without the meat becoming dry. 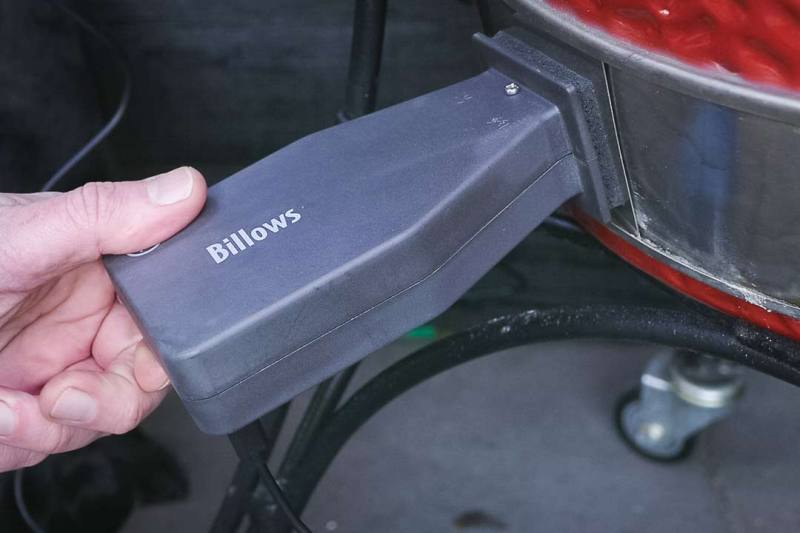 Installing the Billows on the kamado is very easy. You search for and place the right adapter so that you get a hole where the Billows fits precisely. The device has a coil spring that clamps itself in the hole, and on the edge of the Billows is heat-resistant foam that ensures an airtight seal.

Then we light the kamado as we are used to. If you now connect the Billows to the Signals via the splitter, you put the plug in the socket. You place the probe in the clamp on the grid. Plug the other end into channel 4 of the Signals. The Billows will start blowing immediately as the Signals is set to a default temperature of 113°C (235F). That is, of course, a suitable base temperature, but because of the mild OCD, we have to make it 110°C. 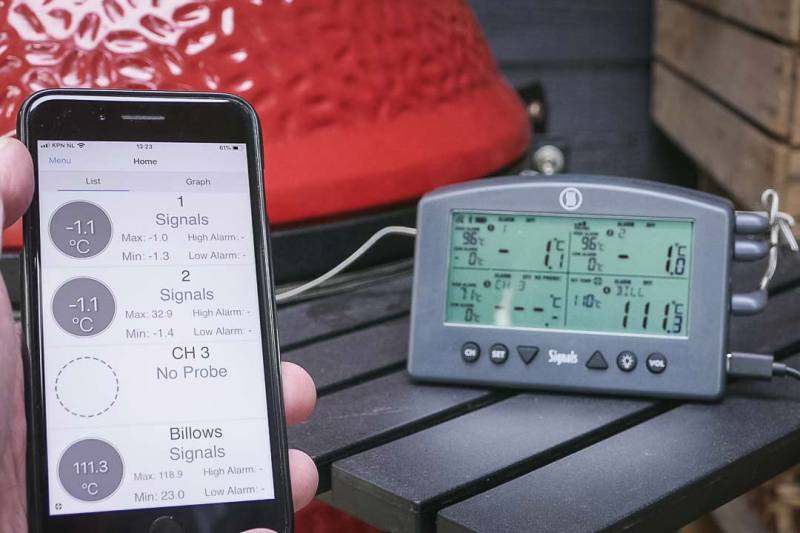 The signals start to beep immediately because the temperature in the boiler is less than 13° below the set temperature. You can turn off the alarm through the app or with the buttons on the Signals.

We open the barbecue to throw some smoke wood between the coals and place the rack with the Boston Butt. The test can begin.

We went to walk the dog to test the cloud function. In the middle of the forest, we set the app to different temperatures and call home to see how long it takes for the temperature on the Signals to be adjusted.

That turned out to have already happened. We do it again with the telephone line open and notice that it is adjusted in a few seconds. This creates confidence in the outcome of the test.

With the Billows at work, we regularly check that everything is going well just before going to sleep, and we throw some extra charcoal in the barbecue just to be sure. It will be a shame if you have to get out of bed because the charcoal has run out. 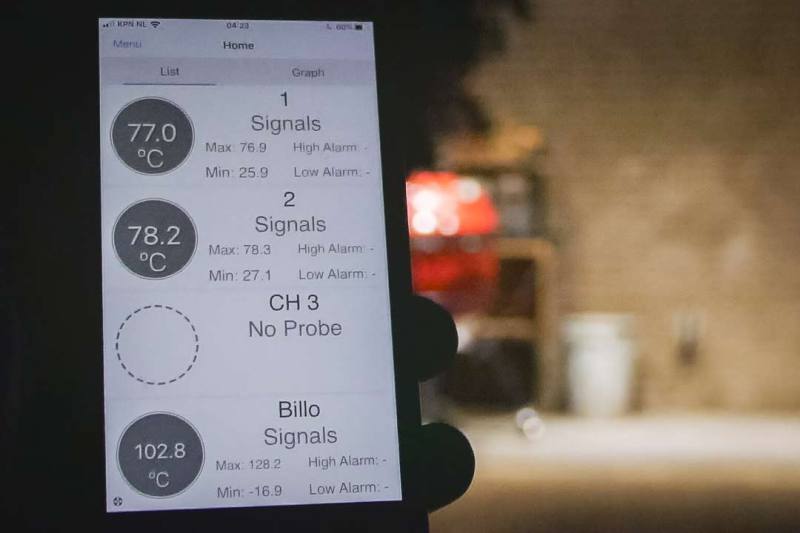 The alarm goes every 2 hours to see how it goes. Everything for science. All night all goes well, but at 4 o’clock, we see that the temperature is 105°C (221F). That is, of course, not a big problem. Certainly not because the wind is blowing so hard outside. But it is not entirely comfortable.

At half-past four, we check how it goes outside when the temperature has dropped to 103. We open the barbecue and see the problem. We use red Quebracho, which are huge pieces of charcoal.

There is still enough charcoal, but the space between the charcoal is just too big to keep the glowing core going. We squeeze some smaller pieces of charcoal between the bigger chunks and go back to sleep.

The Signals has a so-called Open Lid detection. With this feature, the thermometer will notice when the lid opens if the temperature drops too quickly within 15 seconds. The Billows will then stop blowing for 2 minutes.

That is long enough to see what the meat looks like. Of course, you should keep the lid closed at all times. But you know as well as we do, that there is always a neighbor who wants to see what you are doing.

If you plan to keep the barbecue open for longer, for example, if you have to add smoke wood or charcoal, you can pull the probe out of the Signals. Otherwise, the Billows will blow up the ashes, and you get that on your meat. 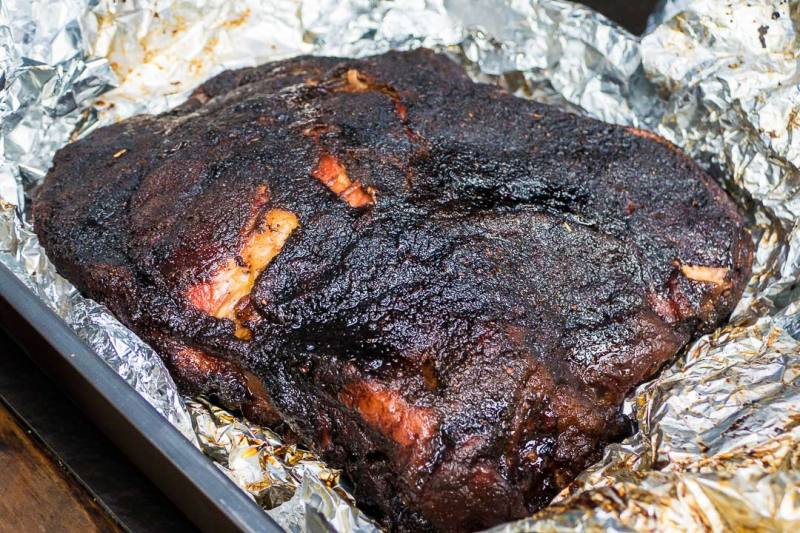 After 20 hours, the Signals indicate that the core temperature in the Boston Butt is 92°C (198F). That could be enough. And after testing with a separate Thermapen, we are delighted. The Billows did an excellent job.

What do we think of the Signals and Billows

The Signals has a beautiful large display that shows the temperatures clearly. The thermometer works fine on its own. Sometimes you just don’t feel like launching an app every time to see the temperature. 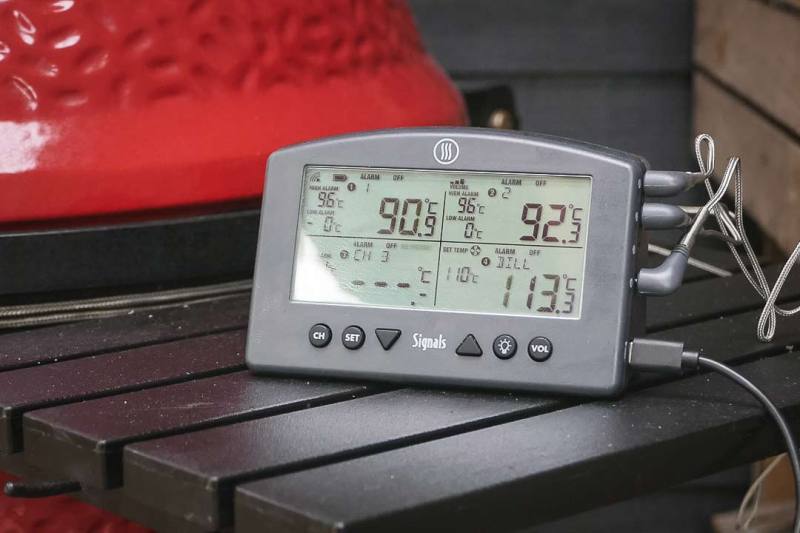 The information through the app is minimal, with no frills. It is not an app that guides you through the cook. But just tells you what the temperature is. Of course, you see all current and set temperatures, and you can click through to graphs of the progress, end in principle, you do not need more.

You do not have to connect the Signals to a power outlet. Provided, of course, you have charged it. Then it can be used for 16 hours. That does not seem much compared to other thermometers, but those thermometers do not have a WiFi connection. 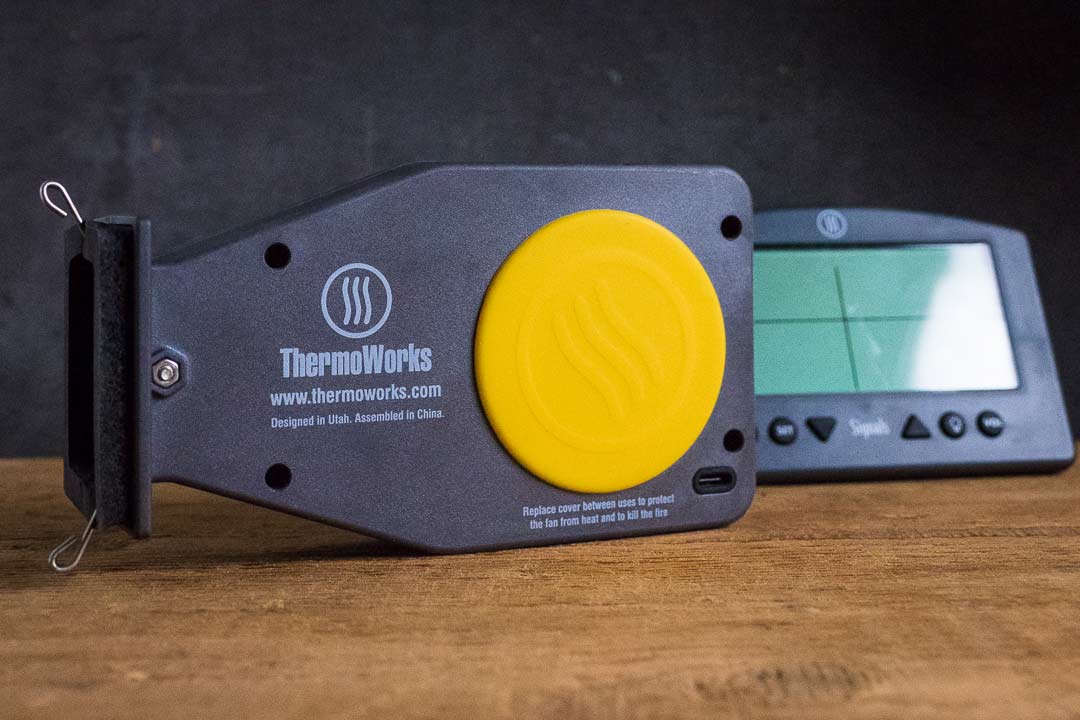 The Signals is the last thermometer you buy, and together with the Billows you really have no more wishes in this area. Both products can also take a beating and are waterproof. And that is necessary because you want to use them in restaurants, during barbecue competitions or catering.

The Signals/Billows combination is really great and is made for the professional or the hardcore bbq enthusiast. If you regularly barbecue low and slow, you can quickly put them both on your wish list.