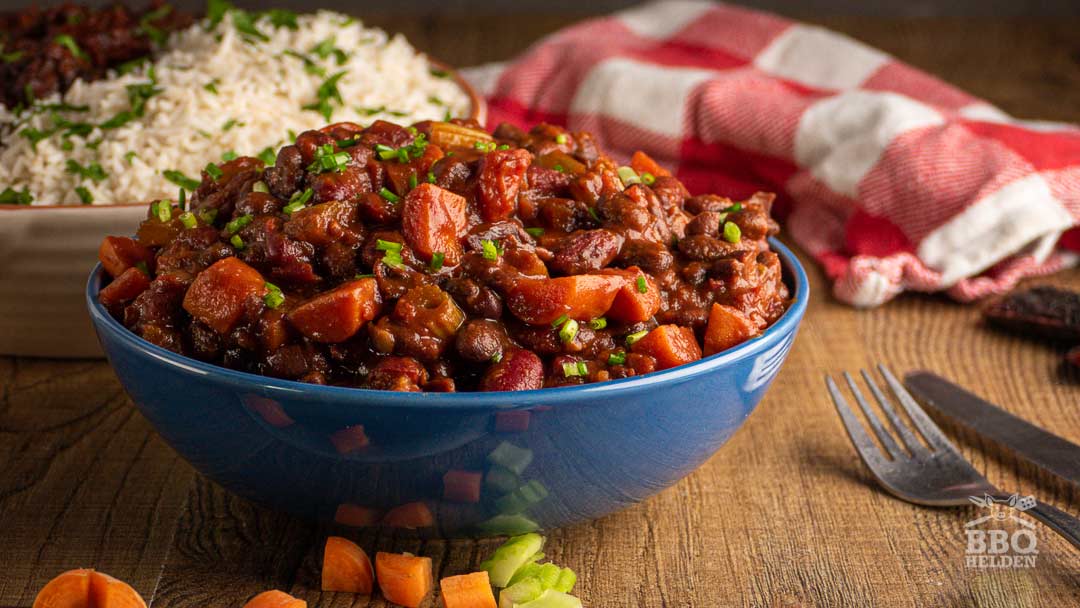 This is a delicious vegetarian alternative to the traditional chilli con Carne. Very versatile and tasty for vegetarians and carnivores. Especially if you also plan to serve a big piece of meat. 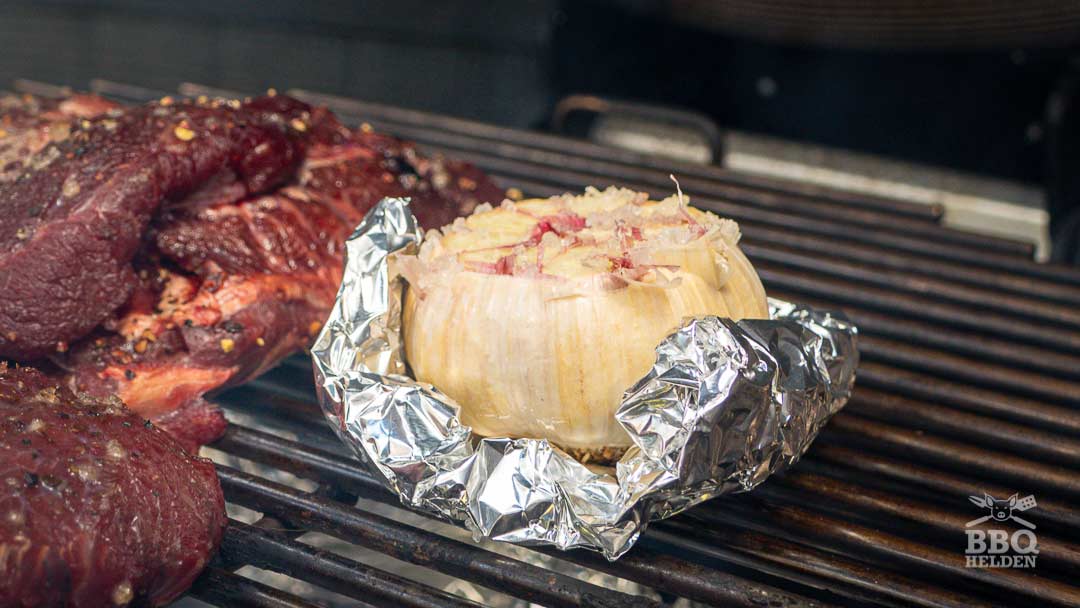 We rarely miss an opportunity to smoke garlic. You just the head off a whole bulb of garlic and pour a little olive oil over the top. Then make a bed of a piece of aluminium foil and place the bulb. If you smoke it for half an hour next to a piece of meat that you are already smoking at that moment, the cloves will become very soft and brown. 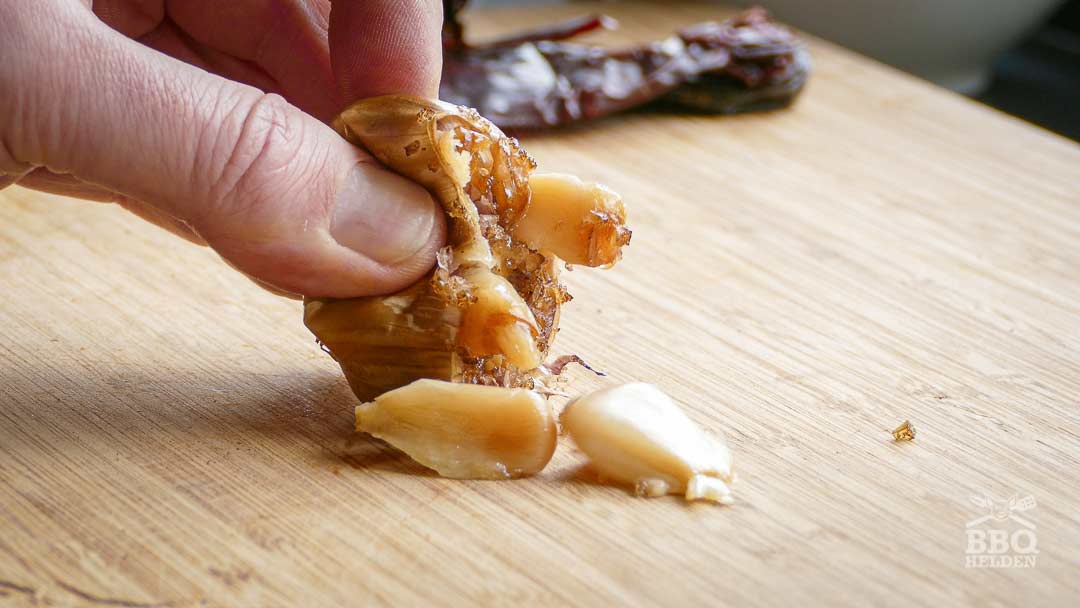 Smoked garlic can be used anywhere you use regular garlic. But especially in dishes that can use a slight smoky flavour, such as in this chilli. But you can also spread it on toasted bread or spice up your mashed potatoes.

The smoked garlic will keep for weeks. Put the toes in a jar with some extra oil and put it in the fridge. Close it well; otherwise, everything in the fridge will smell like smoked garlic at some point. We use two cloves for this dish. You can squeeze it out of the bulb very easily. Sprinkle a little bit of salt over the clove and press it to a puree with the side of a knife. 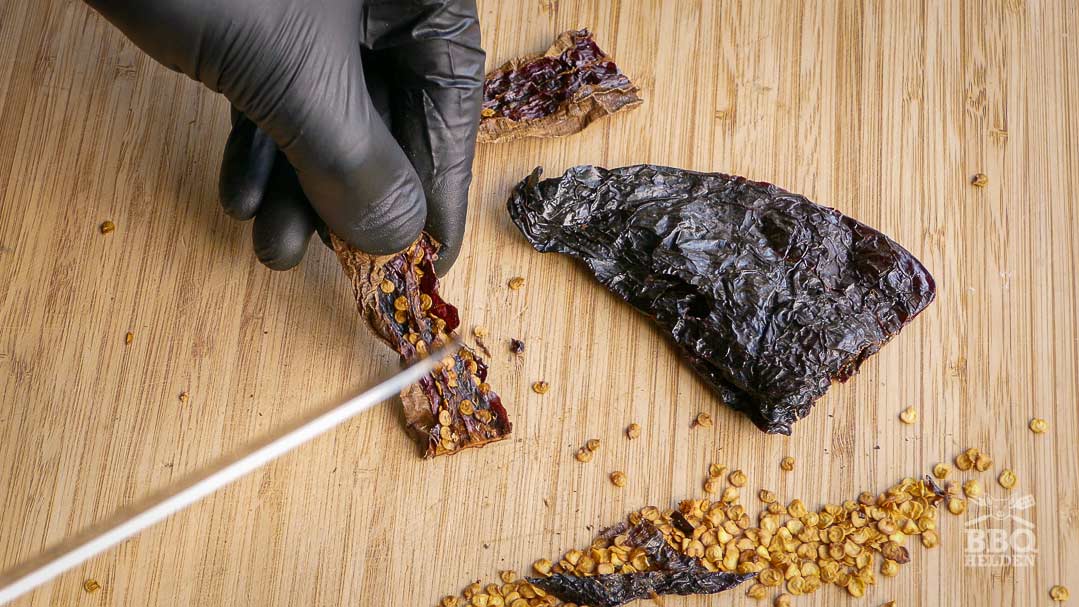 We received a nice box with dried peppers from Mexpro and thought we should make something tasty with them. We used the ancho and chipotle pepper. These are relatively mild peppers, but we still removed the seeds and membranes. Dried peppers have a very concentrated taste, and this will be a spicy bean dish, but we want everyone to enjoy it. 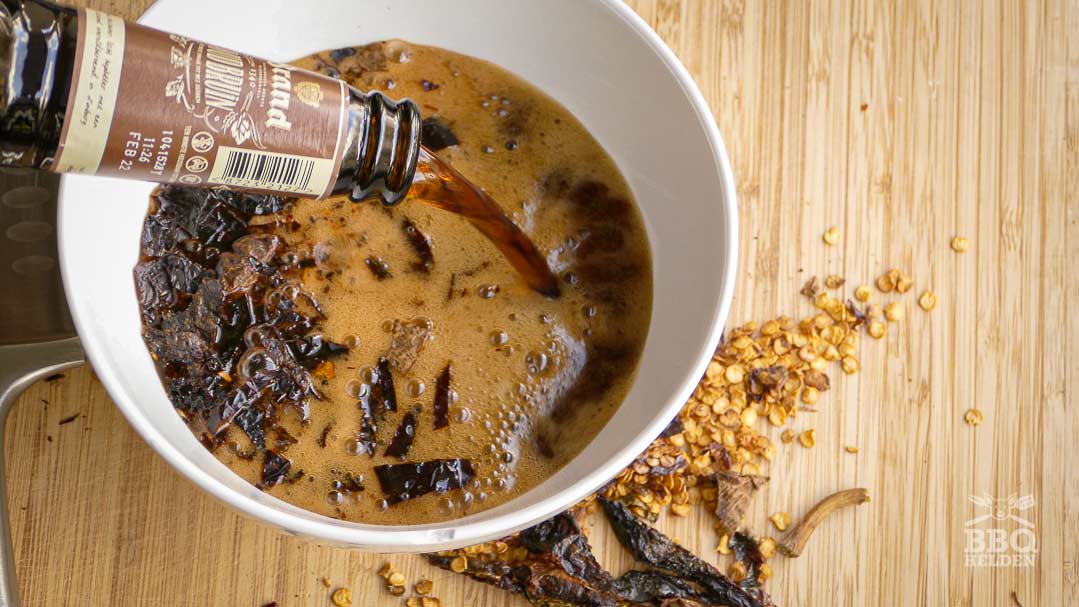 Dried peppers have to soften again to be eaten. That is why we soak these peppers in a bottle of dark beer. Half an hour is enough to get the peppers soft again. 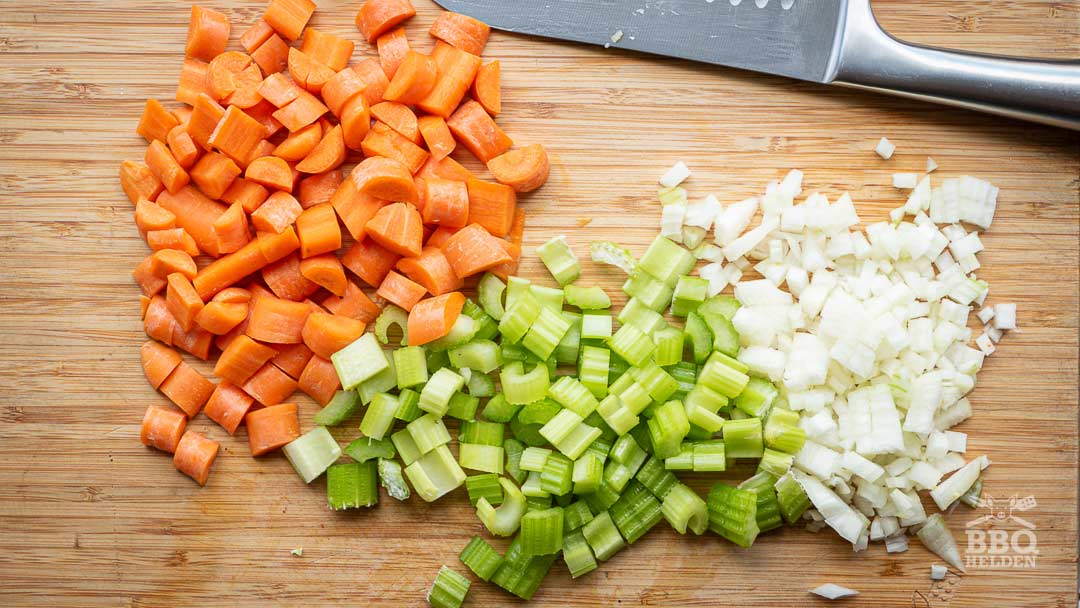 To give this bean dish a bit of a bite, we throw in carrot and celery. We use four carrots and two celery stakes. It may be a vegetarian recipe, but we don’t need to overdo it. There is also a whole onion in it. All good recipes start with onion, right? 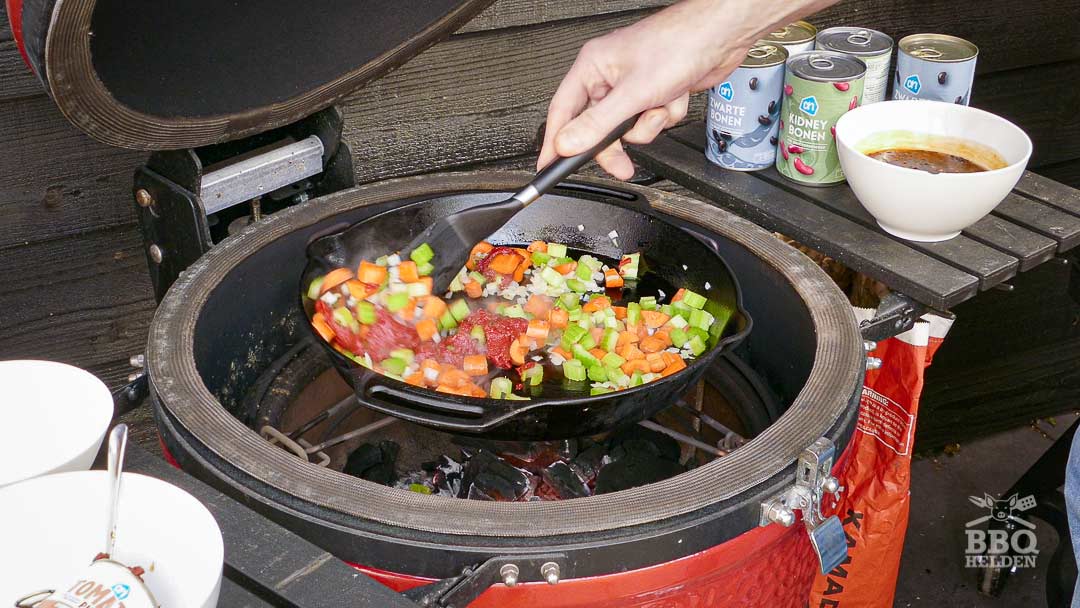 First, we fry the onions in a little olive oil, and then we throw in the carrots and celery. A can of tomato paste is also included. Tomato puree immediately gives a fresh taste to this recipe. We always stir-fry the puree briefly to get rid of the very sharp taste.

The carrot and celery bits are not supposed to soften. We want to have something to chew while we eat. 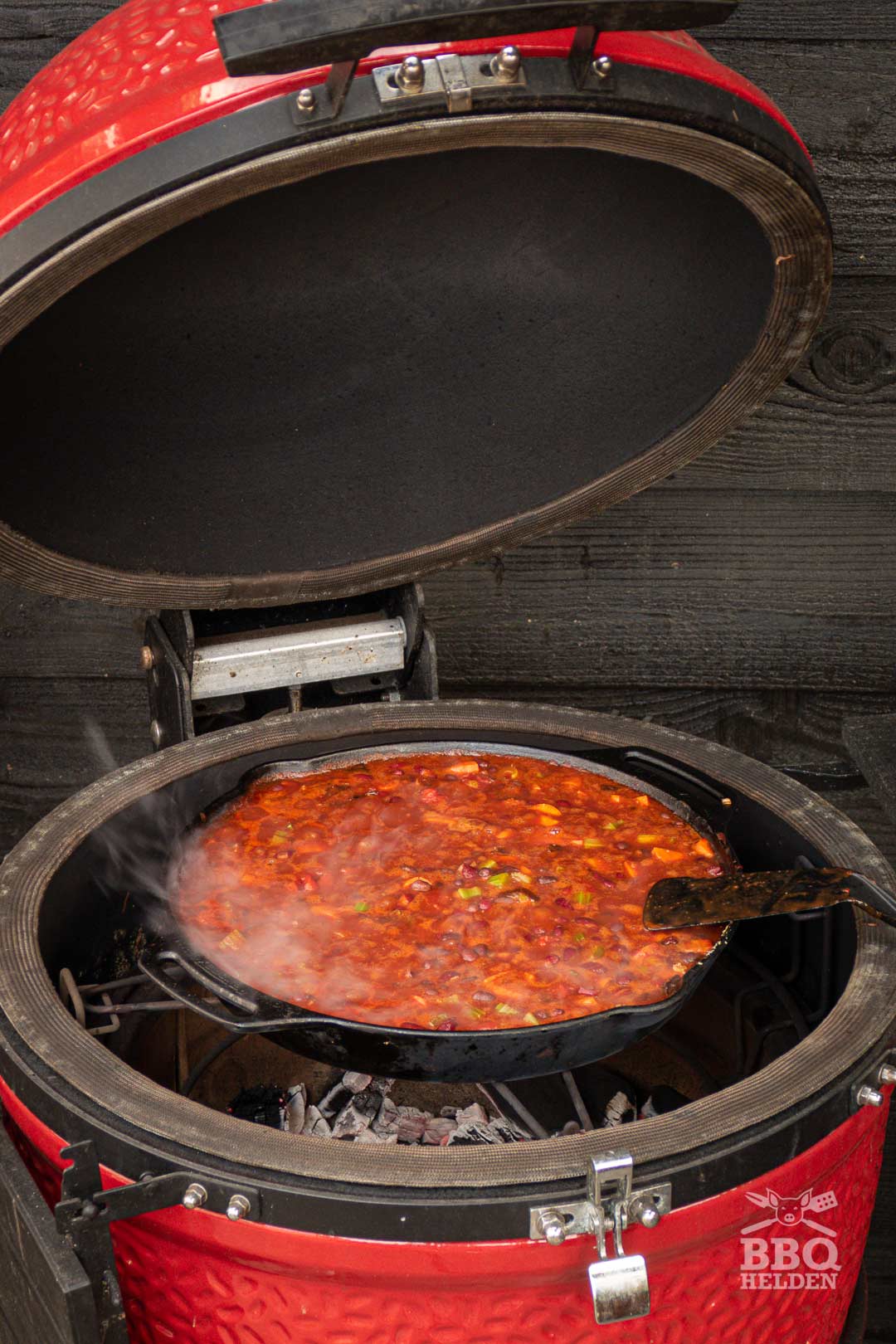 If the soaked peppers and beans are added, we let this simmer gently at about 150°C (302F). Half an hour is enough, but longer is better. All flavours mix even better, and with a bit of luck, the dish will absorb a bit of smoky flavour.

The Kamado Joe comes very complete with many accesorys, including a handy accessory rack. You can place your plate setter on it, but also a Dutch oven or, in this case, your cast iron skillet. 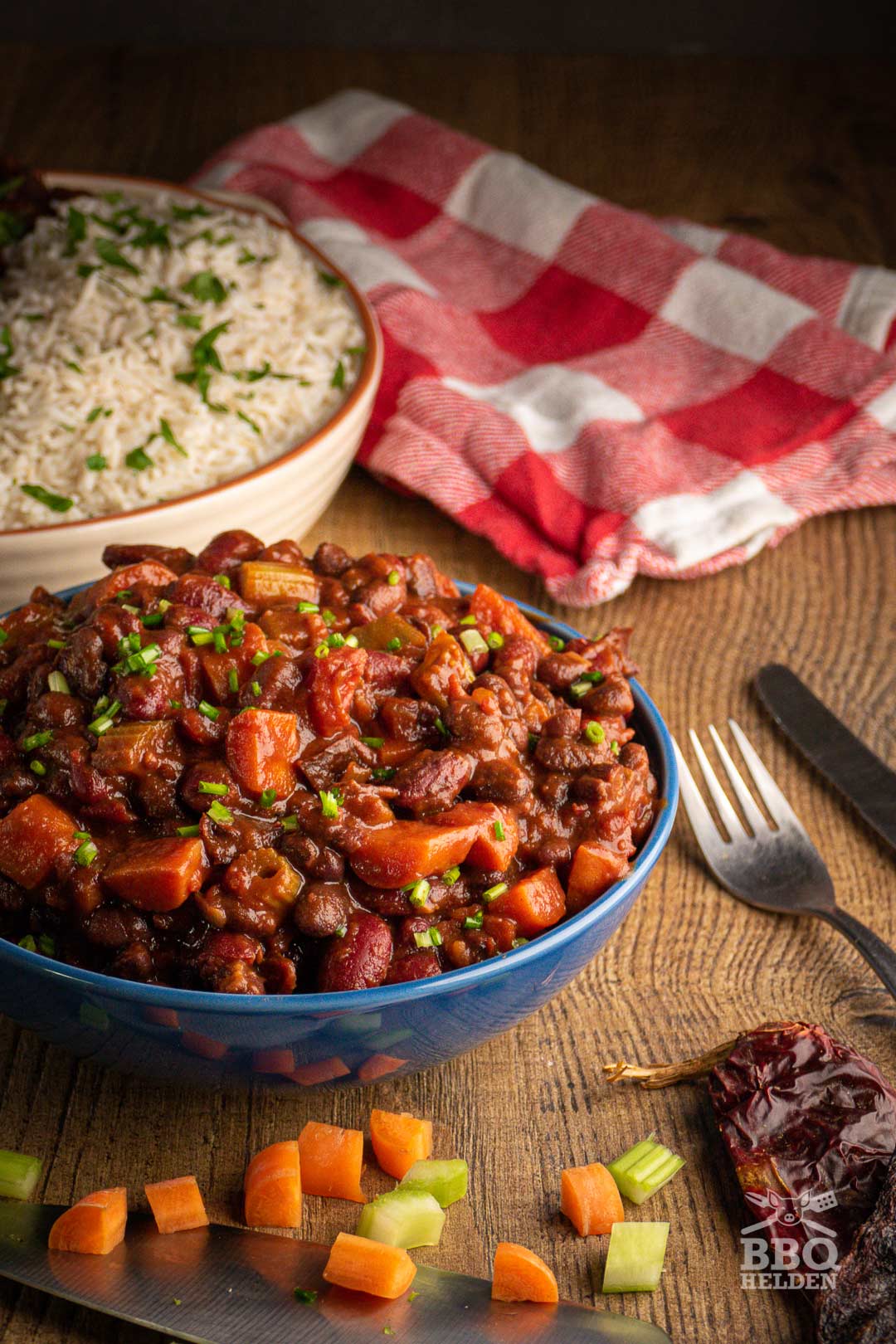 You won’t miss the meat with this bean chilli. Of course, you can put an excellent meat dish next to it yourself, but it is also great, just as it is. The dish is also delicious when heated up. In fact, we like it better that way.

You can also spice up this bean dish by serving it over a bowl of nachos or letting a little cheese melt over it. By the way, we don’t lie that this is a spicy bean chilli. Real chilli heads will probably laugh about it, but this recipe has a nice kick.