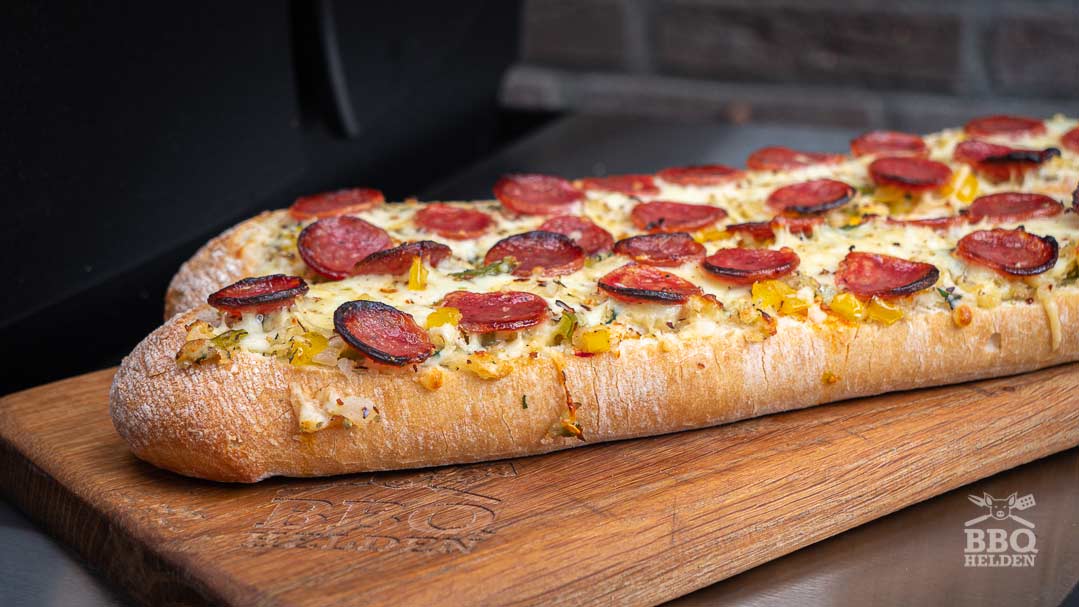 Is there anyone you can’t make happy with pizza bread? We do know someone. But that is really an exception. The rest we served this bread loved it.

You can make this stuffed bread as big or small as you want. You can also experiment with different ingredients. You can prepare this pizza bread a upfront so that all you have to do is warm it up. How easy is that? 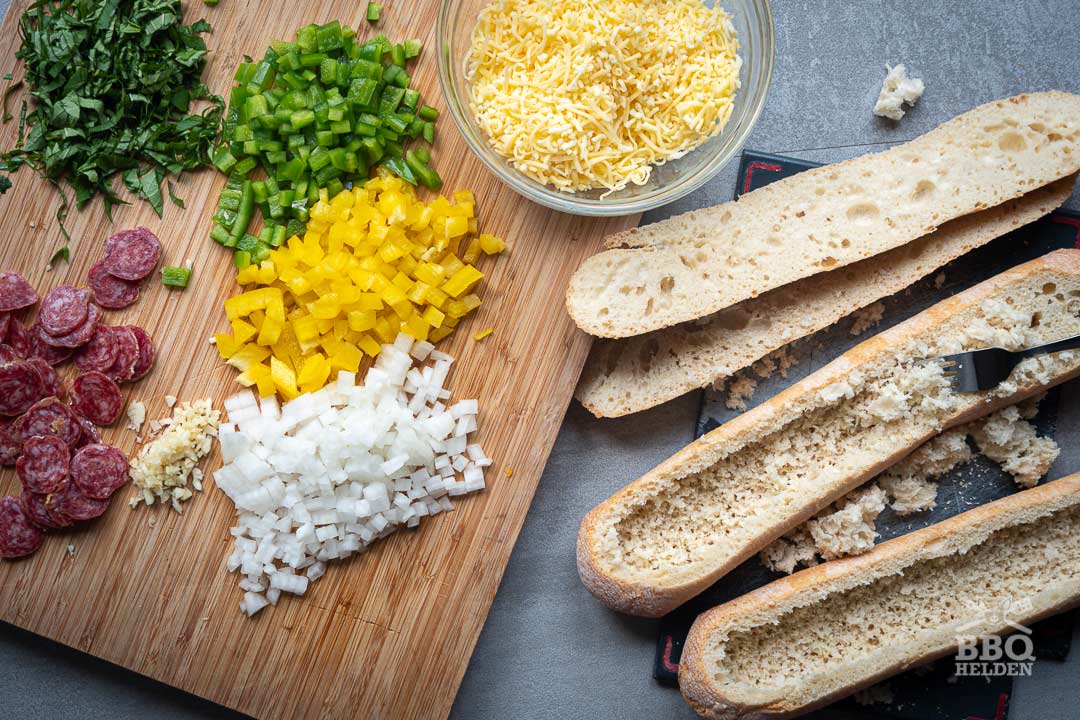 Most of the work for this pizza bread is in the preparation. It is helpful to have everything prepared before lighting the grill. So the peppers, garlic and onion are cut, and the bread is hollowed out. This is very easy to do with a fork. You just scrape out all the bread and leave the crust.

You can take 1 large French baguette or 2 small ones as we have. Or you go big and take a floor loaf. Then you have to check if you have enough ingredients to fill the bread. But you’ll have to find that out for yourself.

For the grated cheese, we have a mix of mozzarella and aged Gouda. We think that’s a good mix of taste with the ability to melt. Of course, you can decide for yourself what kind of cheese you use. 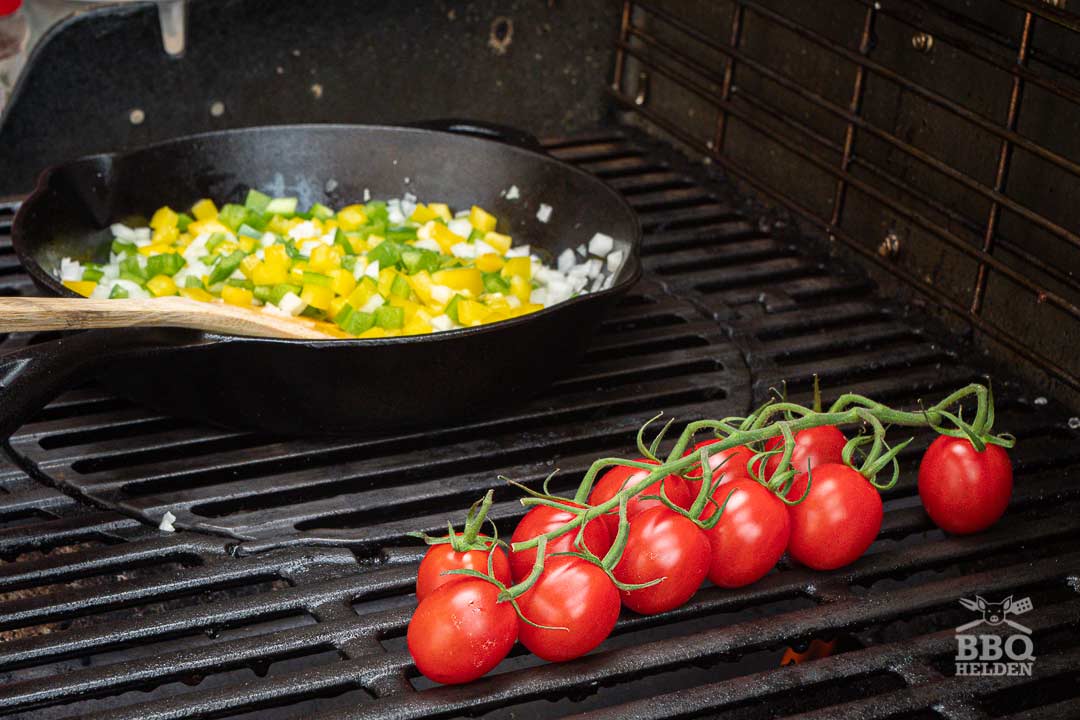 Fry the onion, garlic and bell pepper until the onion has softened. Season it with a bit of salt and pepper. Place the tomatoes directly on the grates. 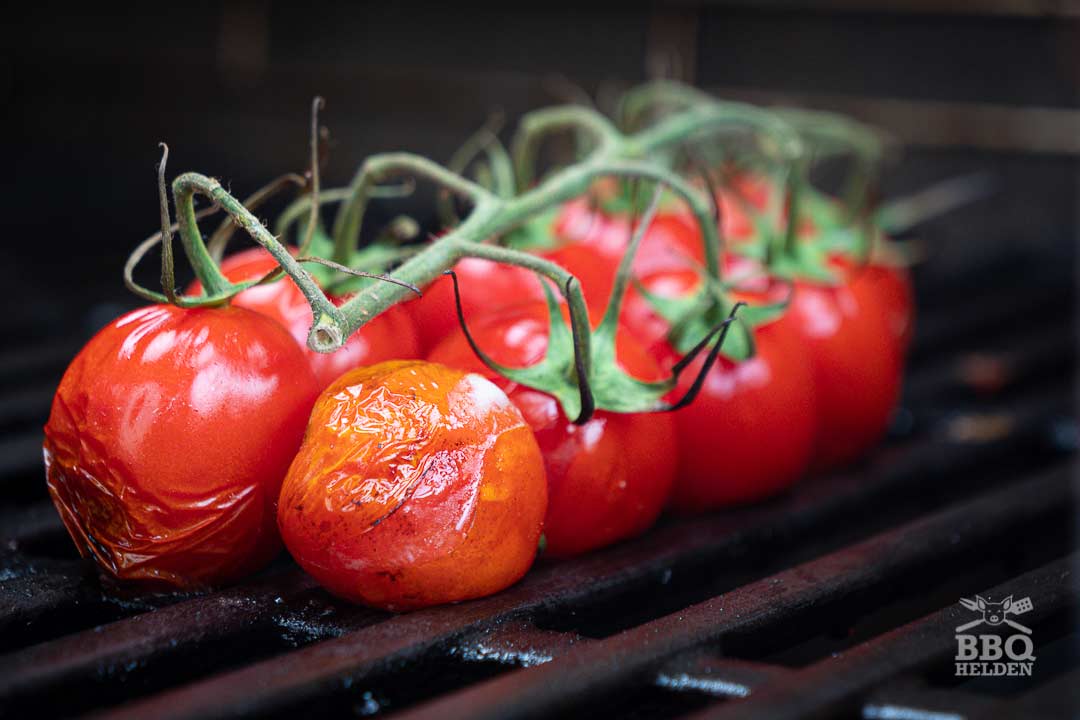 Leave them there until the skins pop and the tomatoes has become soft. Make sure you remove them from the grill in time. Otherwise, they will fall in between the grates, and you will lose them. 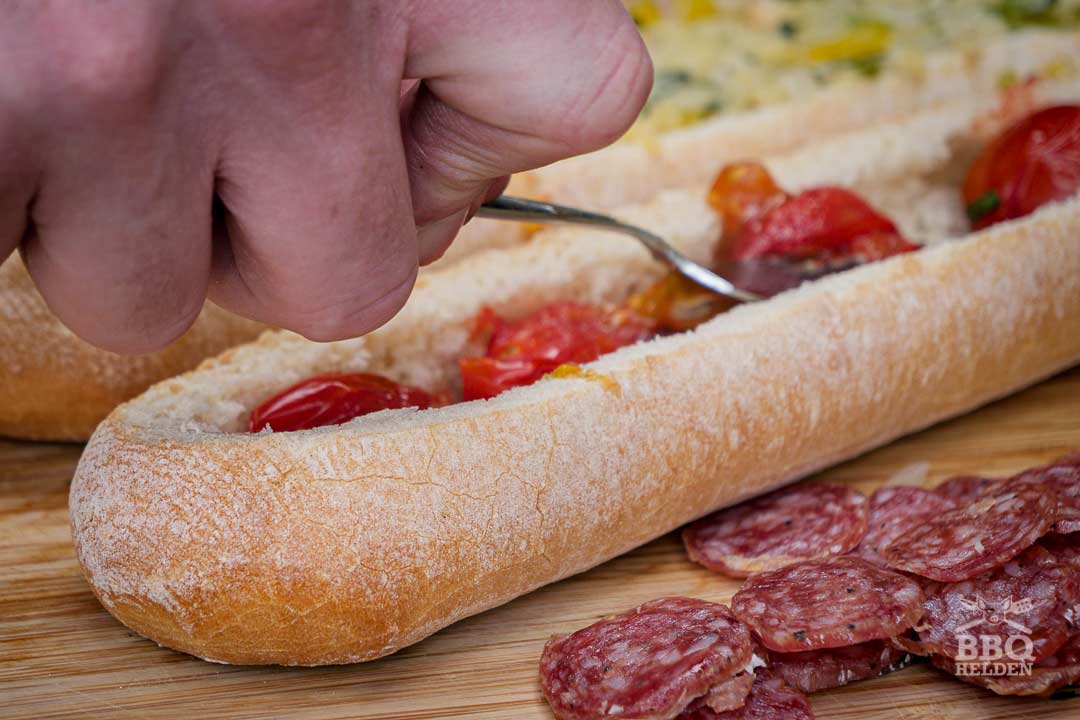 If you put the tomatoes in a row in your hollowed-out baguette, you can crush them one by one with a fork. This way, you have your tomato sauce. 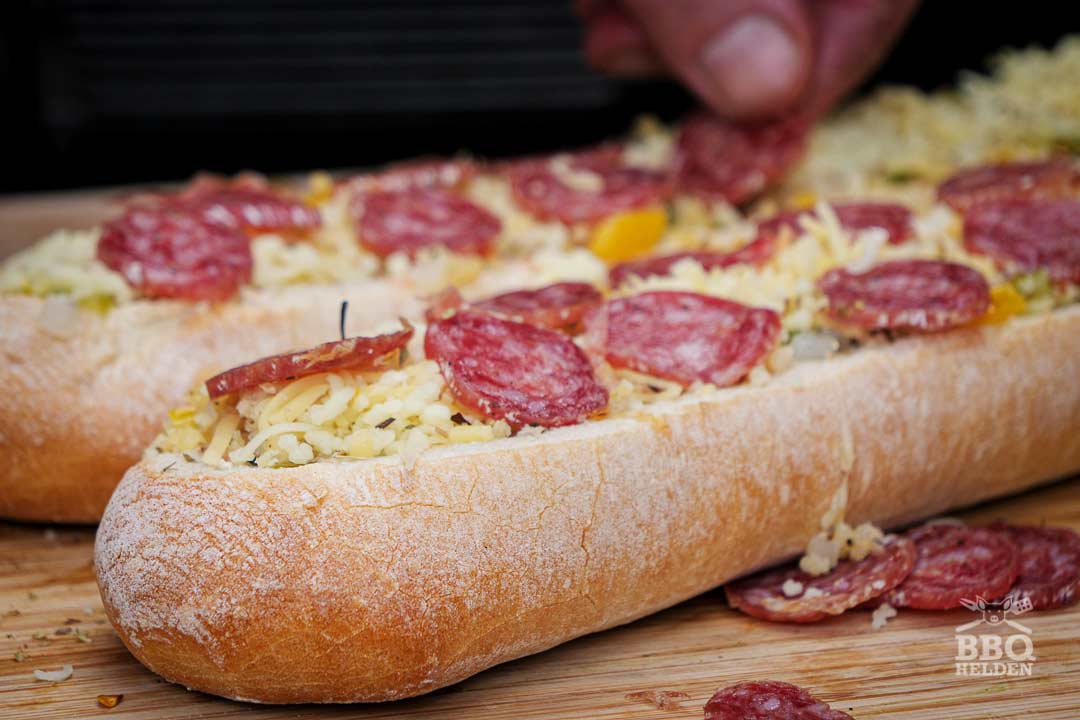 You mixed the bell pepper and onion with part of the grated cheese and half of the bread you removed from the bread. With that mix, you stuff the bread. On top of that goes the rest of the cheese and the pepperoni. That’s starting to look like pizza, doesn’t it?

Then the bread goes back on the grill where you have the burners on, on the left and right. Let them sit for 10 to 15 minutes until the cheese has melted. Turn them halfway through so they cook evenly on both sides. 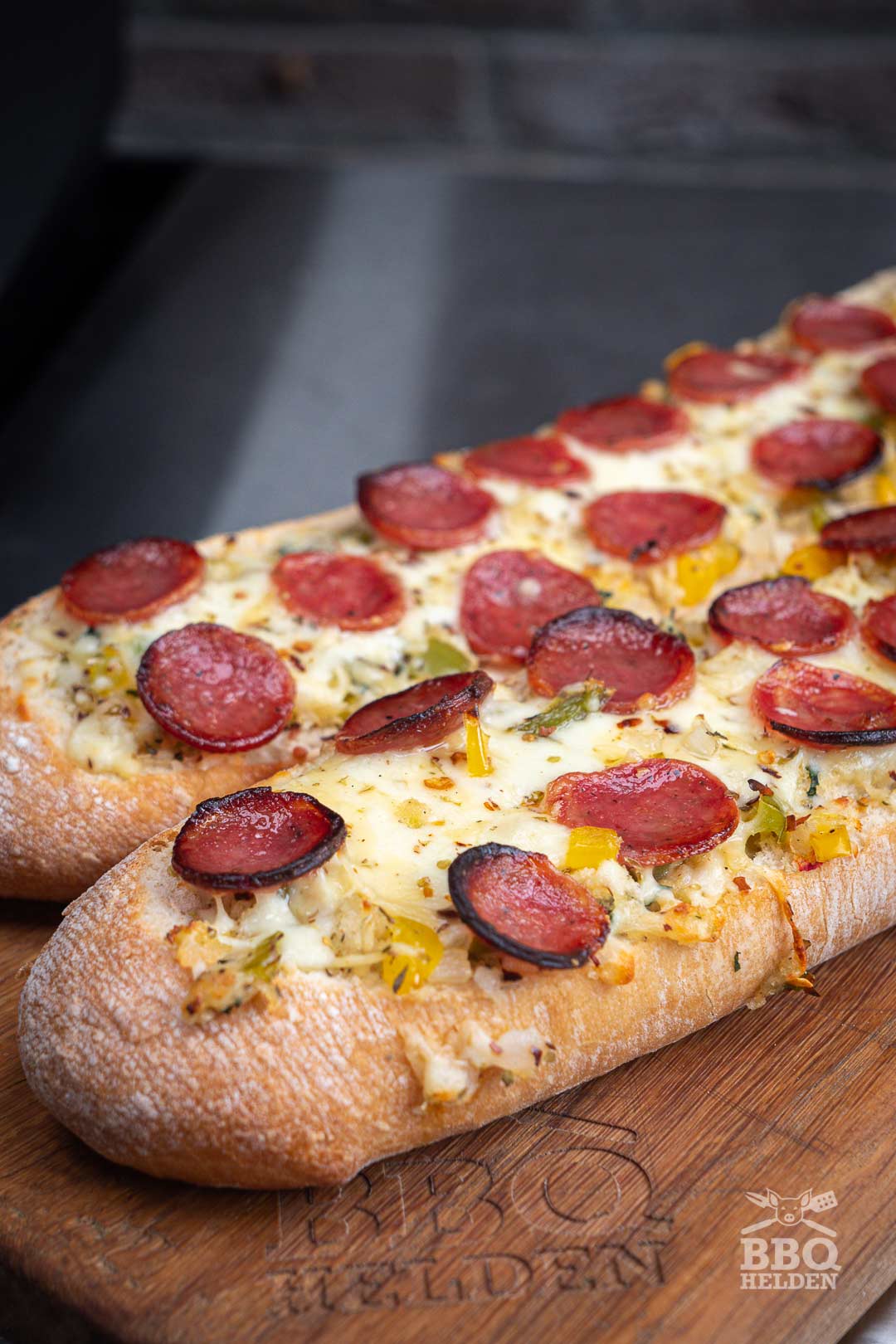 This is our pizza bread. Great as a snack or an easy meal. If you are going to make this pizza bread let us know in the comments below. Or better! Take a photo and post it on Instagram. Tag @bbq.heroes so we can see what you made.