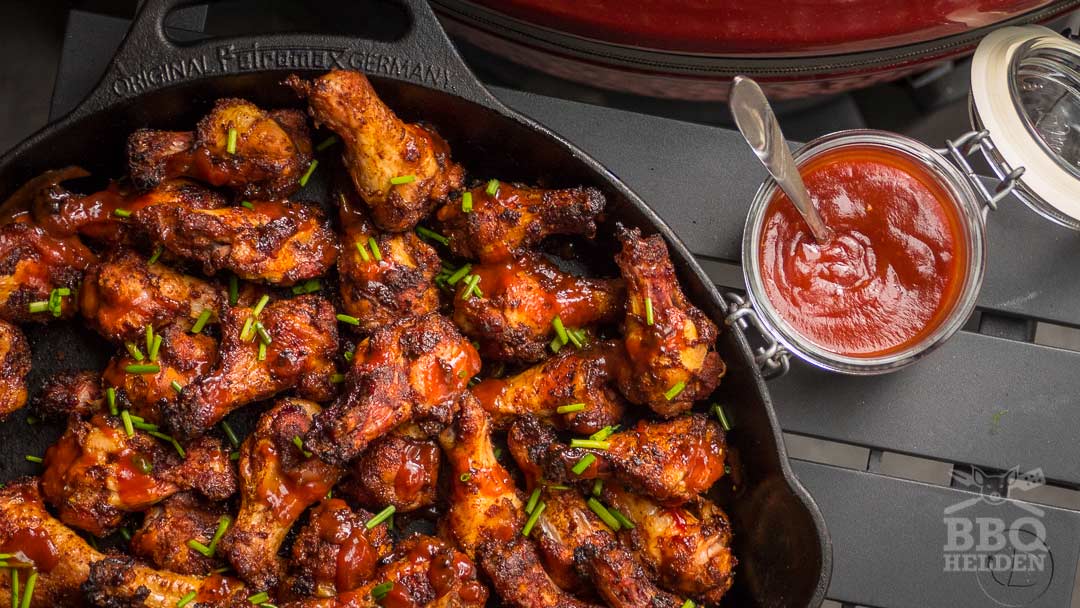 These chicken drumettes are spicy and crispy. And with the lemon bbq sauce, you have a great snack when family or friends come over. 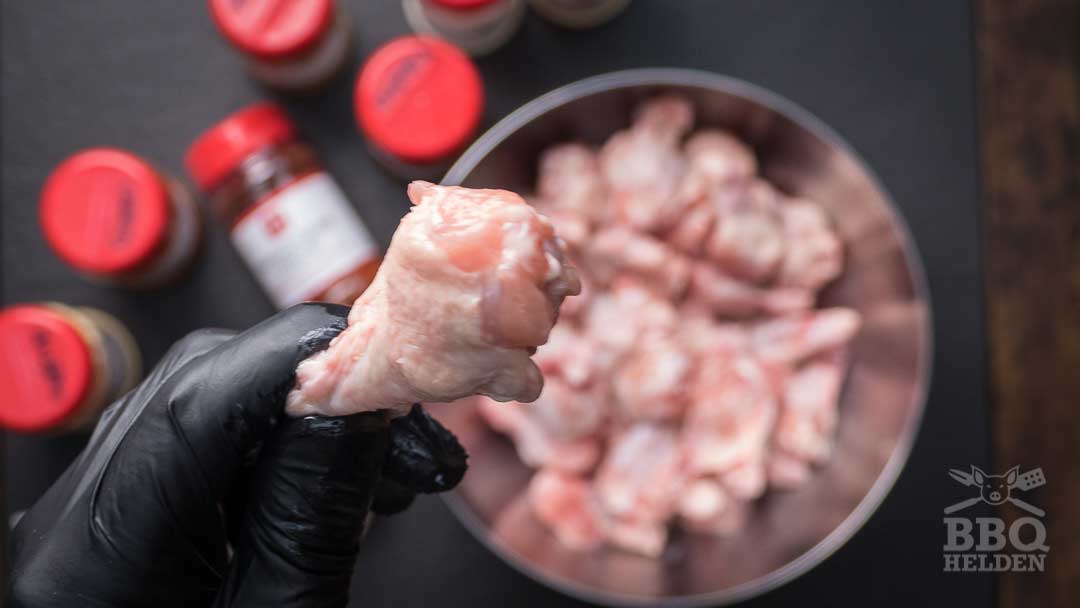 If you look at a complete chicken wing, it consists of 3 parts. The upper arm, the mid-wing and the tip of the wing. You can immediately throw away the tip of the wing. That is of no use to us on the barbecue. It’s too thin to get any meat from it. You can make a good stock from it though.

The upper arm and the mid-wing are great to eat. Sometimes you can still see attached together, but often you can also buy them separately. The middle wing has 2 bones. Most of the meat is between the bones. The upper arm has 1 bone, and there is the biceps of the chicken. That is a beautiful piece of meat to chew off the bone. The upper arm of the chicken is called drumette at the poulterer. 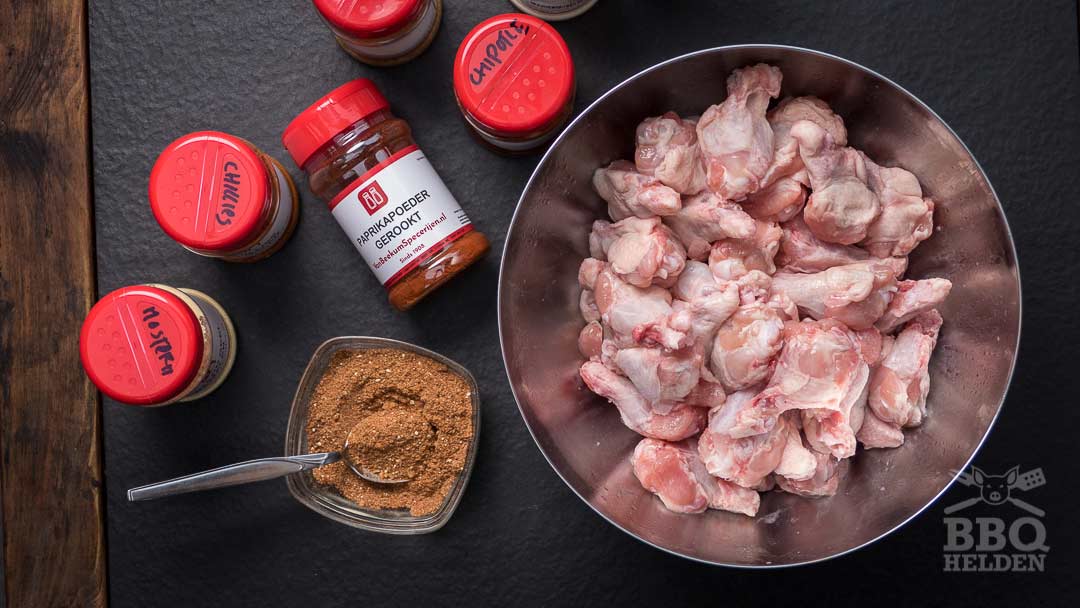 This dry rub works on all chicken and the smoked paprika and chipotle pepper give you a good barbecue flavour right away. This way, you can also prepare the drumettes in the oven. We will look the other way when you do. The mustard powder, black pepper and chilli pepper give the rub a good kick.

So keep that in mind if you want to let the children eat with you. We try to get just as much rub on the chicken drummettes as it will hold. That makes them nice and spicy. 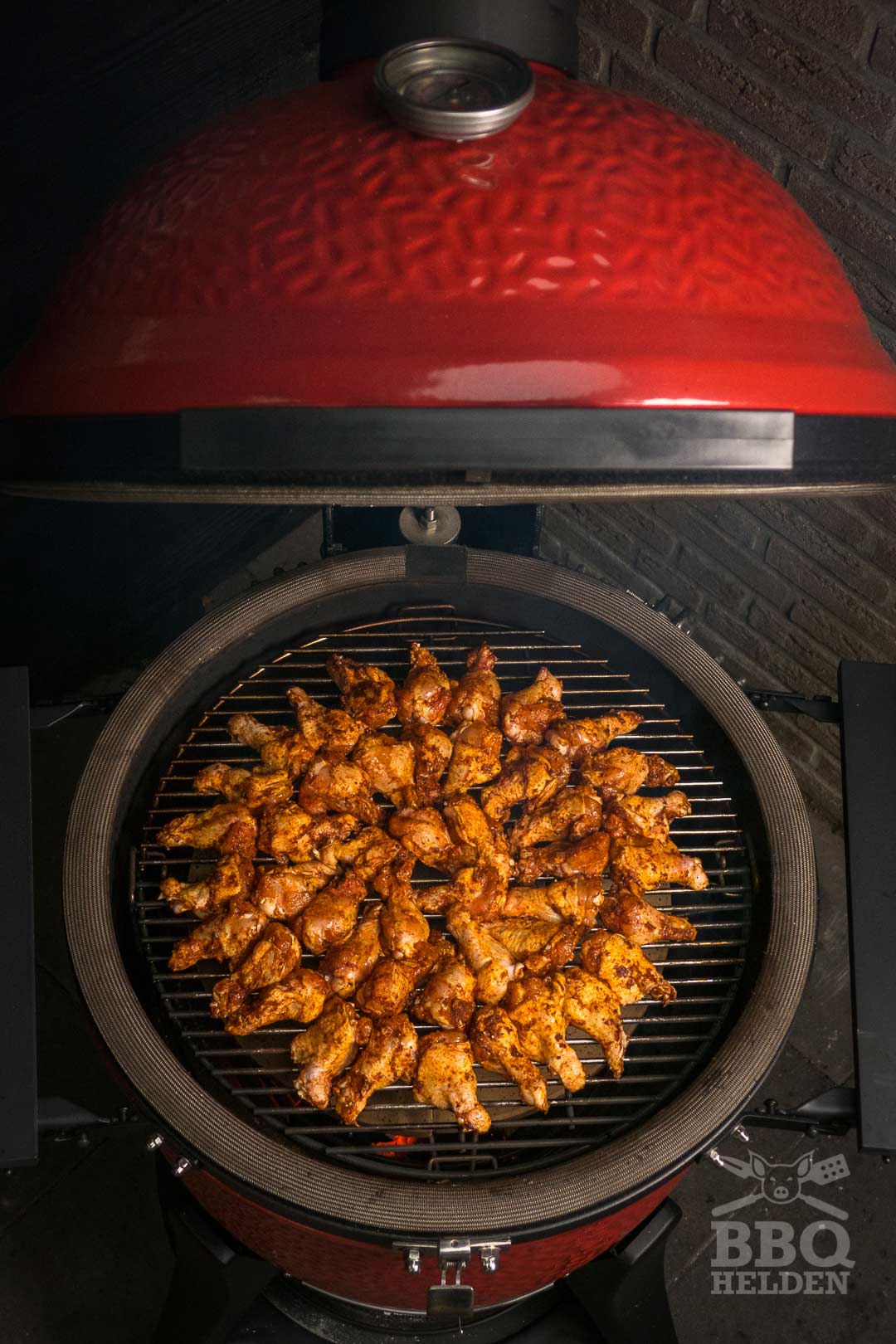 We have already heated up the Kamado Joe Classic 3 and ensured an indirect temperature of 150°C (300F) with the platesetters. A little less is also allowed. Preferably not higher because then the sugar in the rub would burn. This recipe is based on 1 kilo of drumettes, but the grates of the classic easily fit 2 kilos of chicken drumettes. Enough for a small party.

We leave the chicken drumettes for about an hour. Check how it goes halfway through and turn them over if necessary. You can also reposition them if the drumettes on the outside of the grates are going a bit too fast. 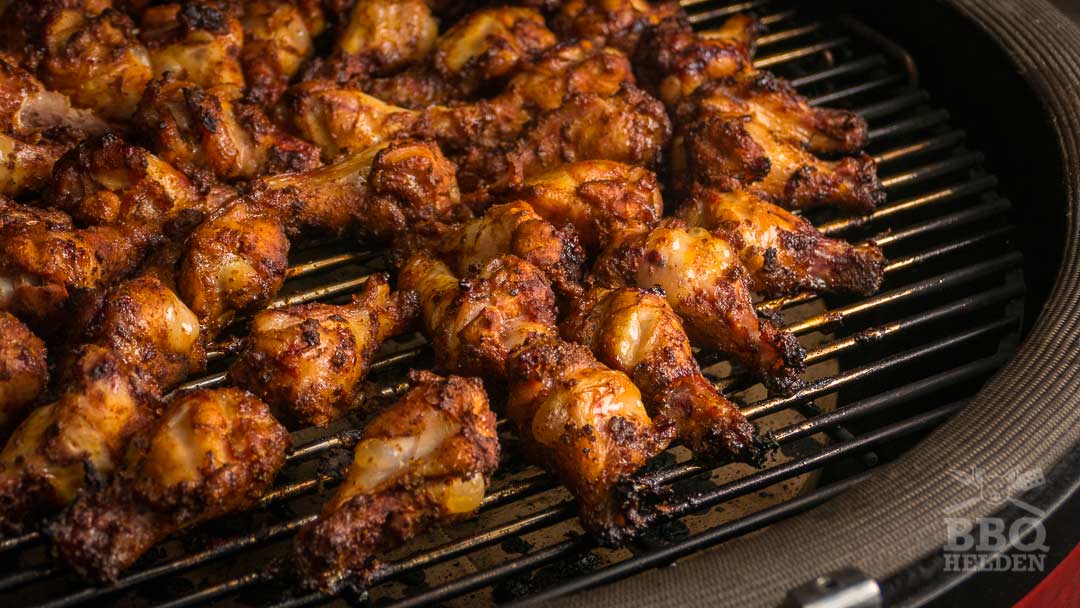 When they are done, you will see blisters forming under the skin. That’s when the skin dries out and becomes crispy. From that moment on, the meat will also start to get drier, so it’s time to take them off. 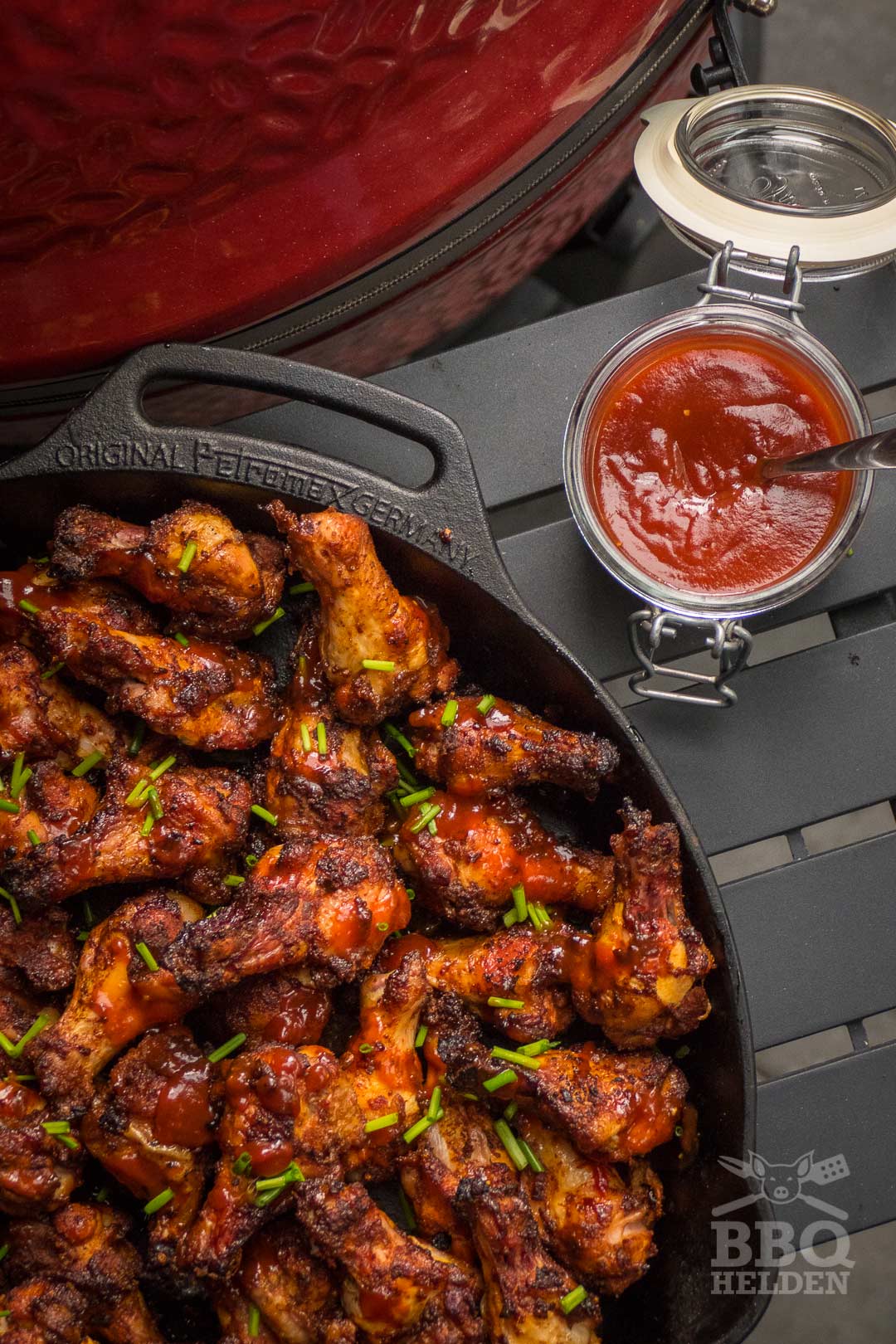 While the drumettes were on the grill, you have made the barbecue sauce. This lemon bbq sauce is nice and tangy and works perfectly as a counterpart to the spicy chicken. You could also brush the chicken with it at the last minute and grill them briefly. This is at the expense of the crispy skin, but they do become sweet and sticky. 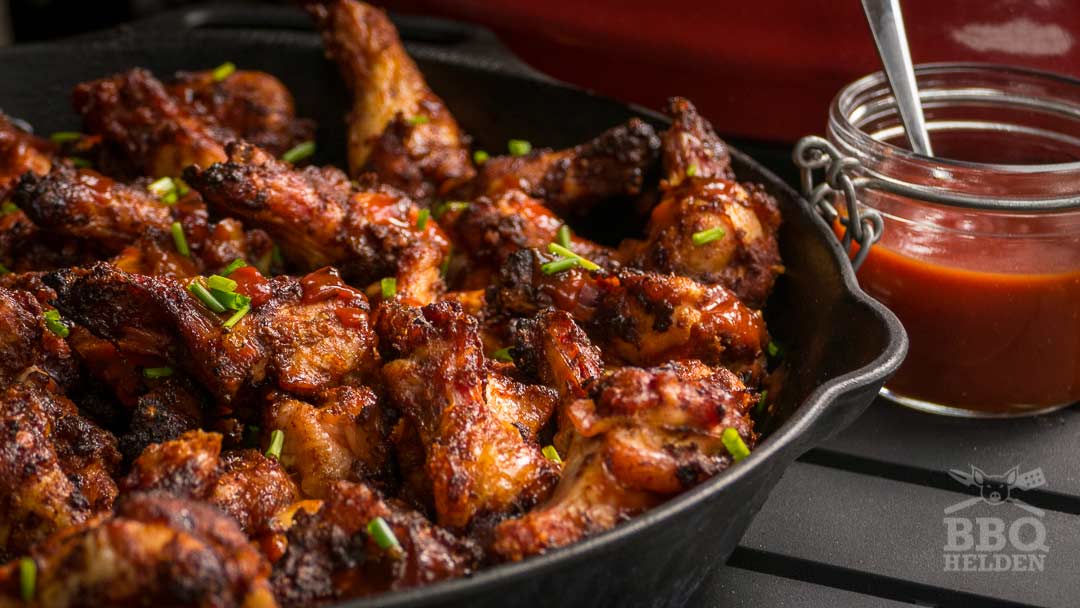 Serve them while they are still hot. We serve the lemon bbq sauce apart from the drumettes because not everyone wants sauce over them. Immediately fill the barbecue with the next batch of chicken drumettes so you can serve again in an hour.

For the lemon bbq sauce