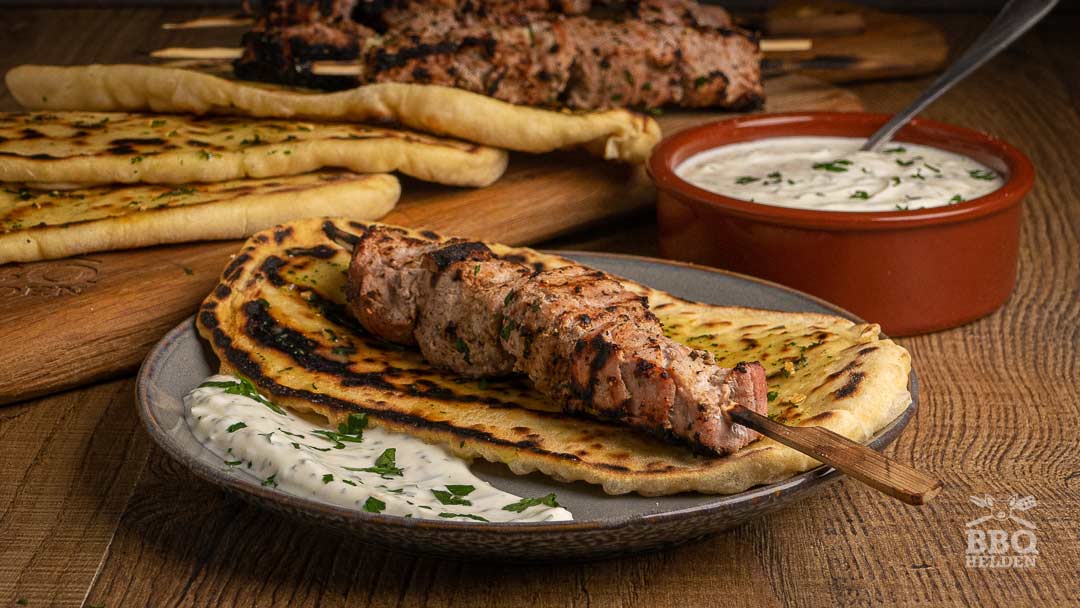 We are already collecting recipes for the summer. The weather is nice at times, but of course, there is always room for improvement. We can’t wait until we can eat outside again in a few months. Then you need a few good recipes to celebrate the start of barbecue grilling season.

And what could be better than meat on a stick? We flavoured these pork tenderloin skewers with a yoghurt marinade. With it, we serve homemade naan bread and a nice tangy garlic yoghurt sauce. Now we just have to wait for better weather. 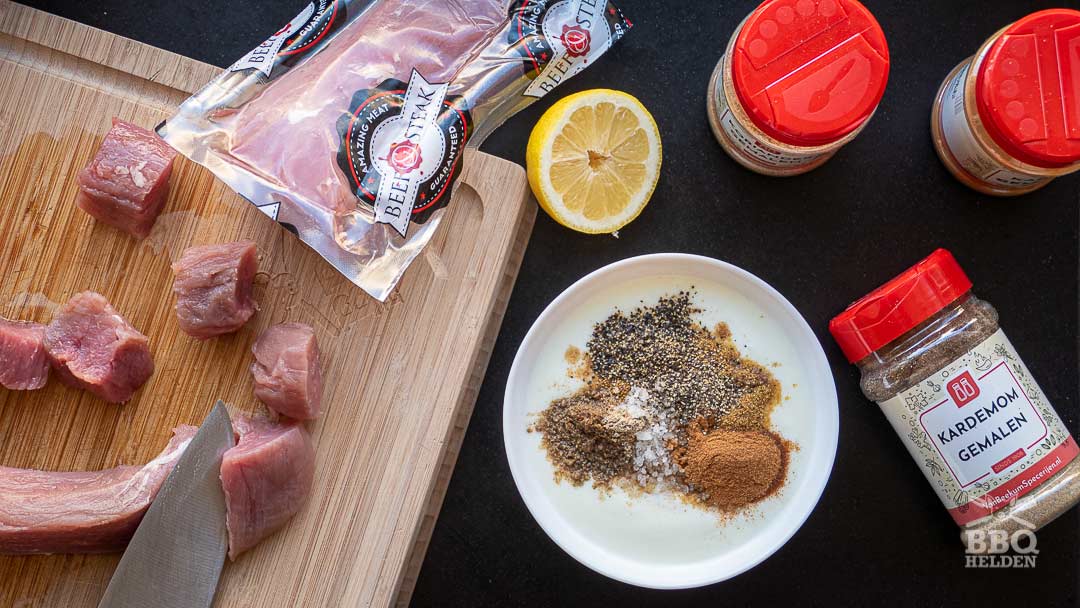 Pork tenderloin is already very tender by itself, but a yoghurt marinade will make it even more succulent. The acids in the yoghurt break down the connective tissue. We season the yoghurt with spices such as coriander, cinnamon and cardamom. The cardamom ensures that the meat will soon have a wonderful fresh smell and taste.

We first cut the pork tenderloin in half lengthwise and then into equal cubes. We then put the meat in a ziplock bag and add the yoghurt marinade. We believe that is the best way to marinate. If you push as much air out of the bag as possible before closing the bag, the marinade will have contact with the meat everywhere, and you won’t need nearly as much. We leave the pork tenderloin in the fridge overnight. If you are not fond of pork, you can also replace it with chicken.

If the pork tenderloin is marinating, you make the garlic yoghurt sauce. The sauce is going to taste better when it stands for a while. The flavours mix better, and the garlic gets a bit sharper in taste. 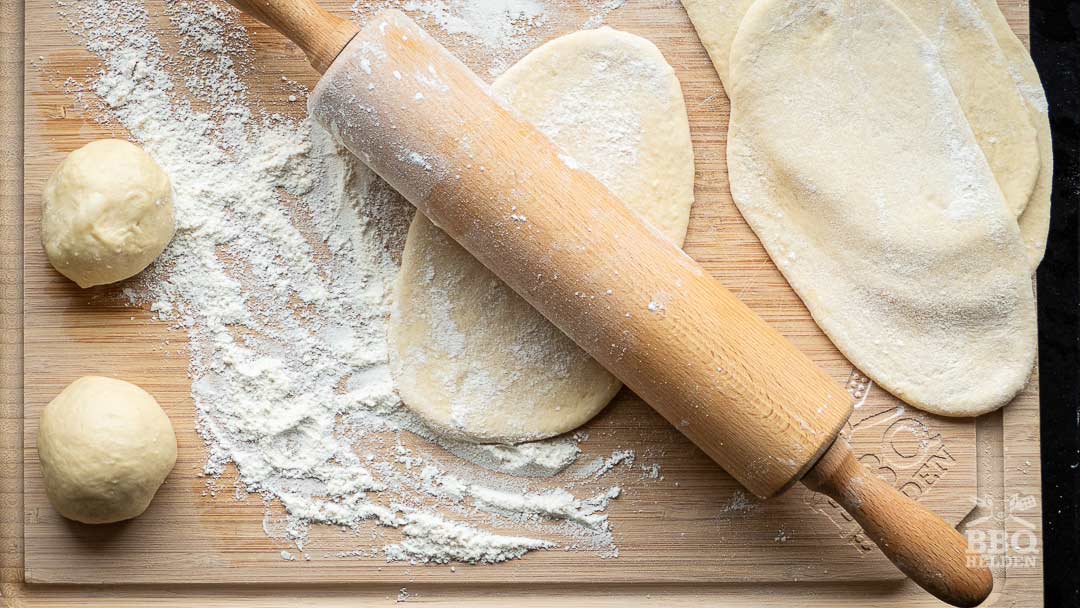 A few hours before we start grilling the meat, we make the dough for the naan bread. We make the naan bread according to the recipe of RecipeTin Eats. We can’t make a better recipe for naan than this one. This recipe gives a lovely airy naan bread and it’s easy to make. 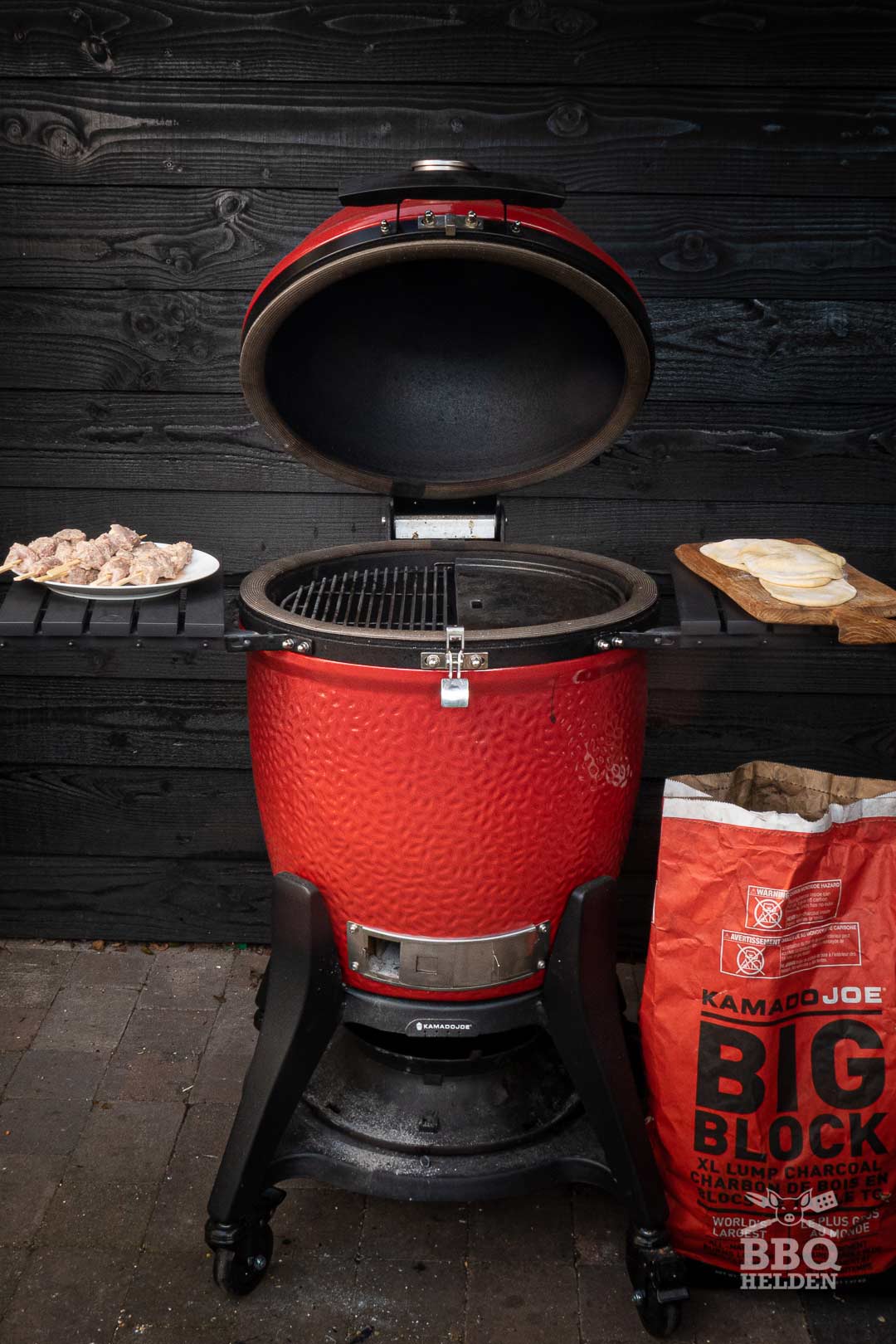 This is our Kamado Joe Classic 3 setup for this recipe. On the left side, we have the stainless steel grill, and on the other side, we have the cast iron grill plate. Naan is originally cooked by sticking it against the wall of a brick oven. You could try that with a brand new or cleaned kamado. But it’s just as easy to use a cast iron grill plate. If you don’t have a grill plate, you could also use a large cast-iron skillet. 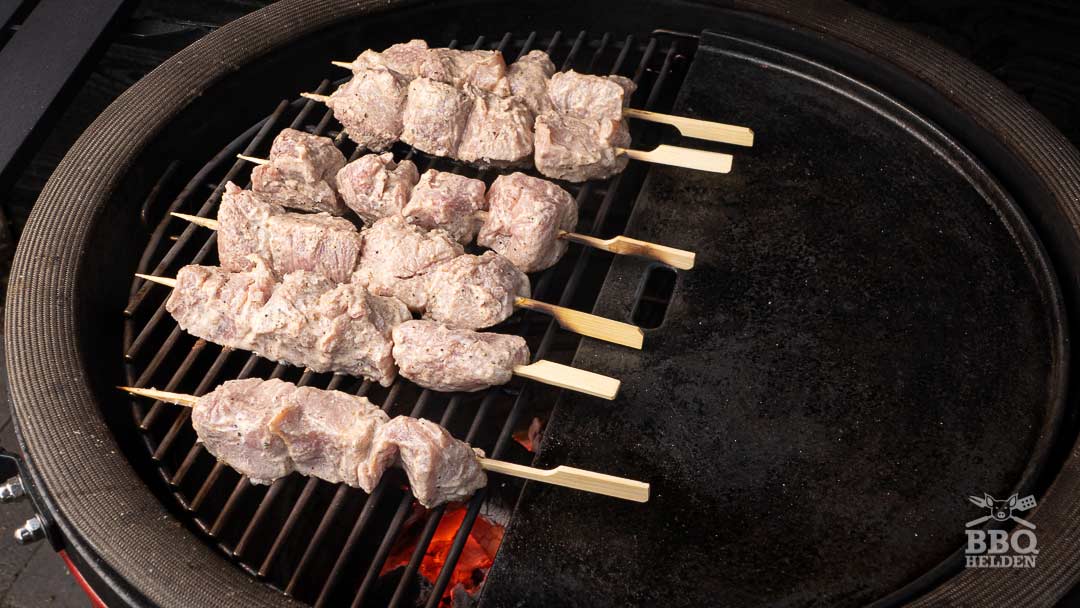 Make sure to place the skewers so that the ends are above the grill plate and the kettle’s outer side. This way, the wood will not burn because of the direct heat. “Then why don’t you use metal skewers? Bunch of suckers”. You’re right; that might have been better.

When everything is grilled, we also melt a little extra butter. When it is hot, it goes off the heat, and we add a clove of garlic, some flat parsley and pepper and salt. We will brush the naan with that later. 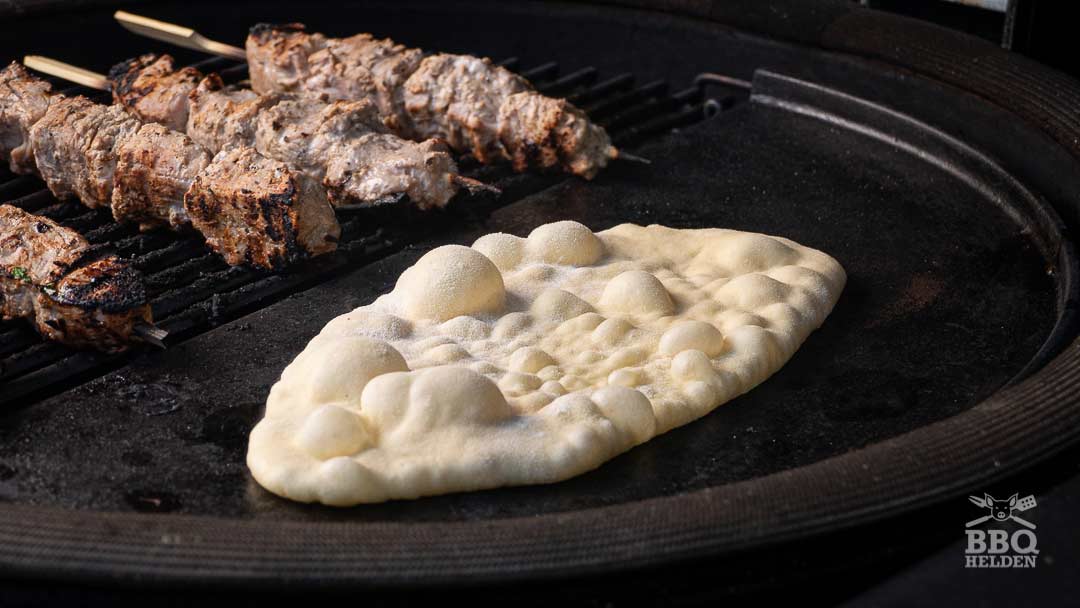 Because the dough contains clarified butter, the dough can go straight onto the grill plate without extra oil. The moment the dough hits the plate, you will see that bubbles form. You are not going to pierce these. If you turn the dough over, they will pop automatically, and you will get holes in the naan. Those holes will be filled with the melted butter and garlic sauce. 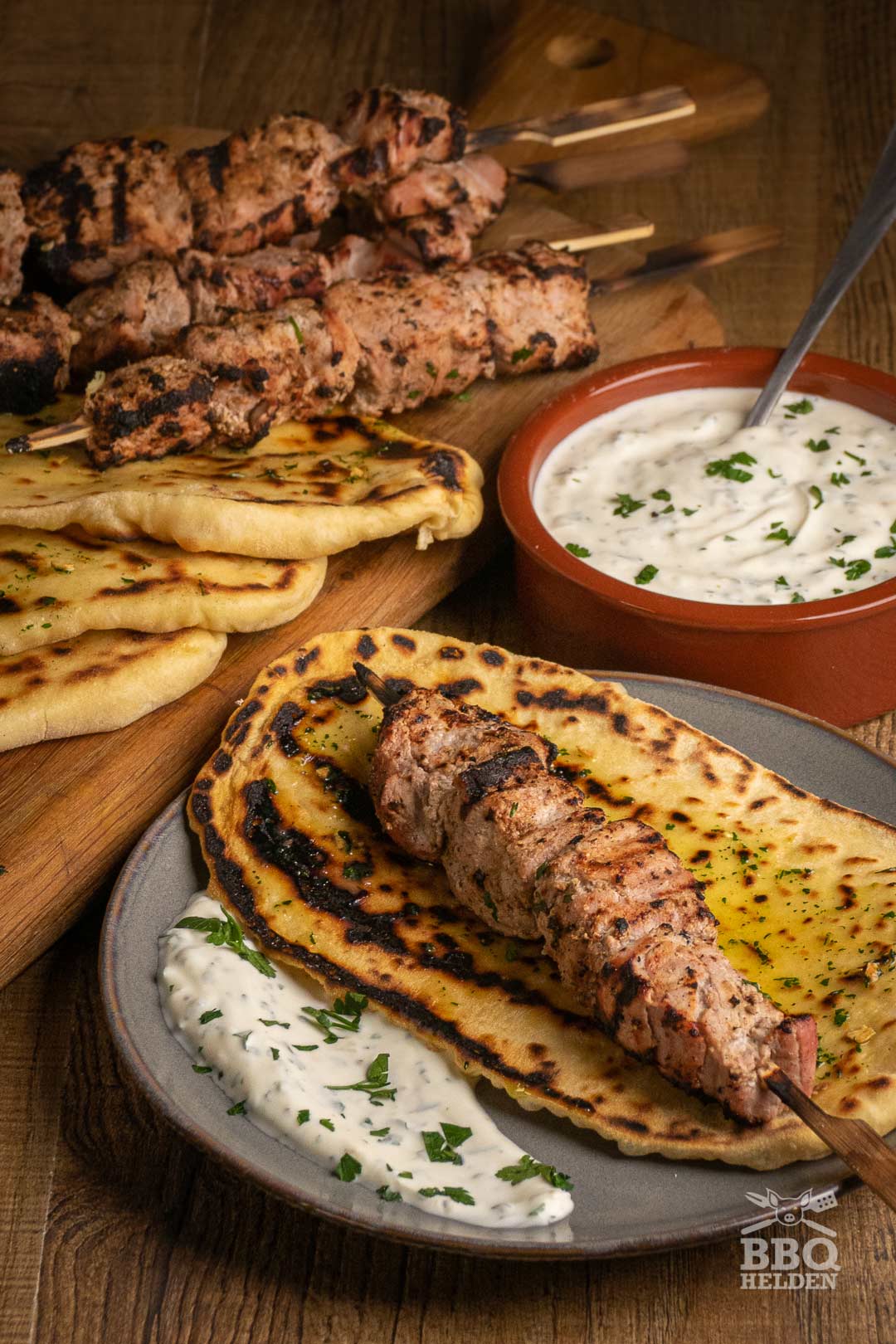 You can use the naan bread to wrap the meat with or wipe the sauce off your plate. Either way is excellent.

For the yoghurt marinade

For the naan bread

For the garlic yoghurt sauce