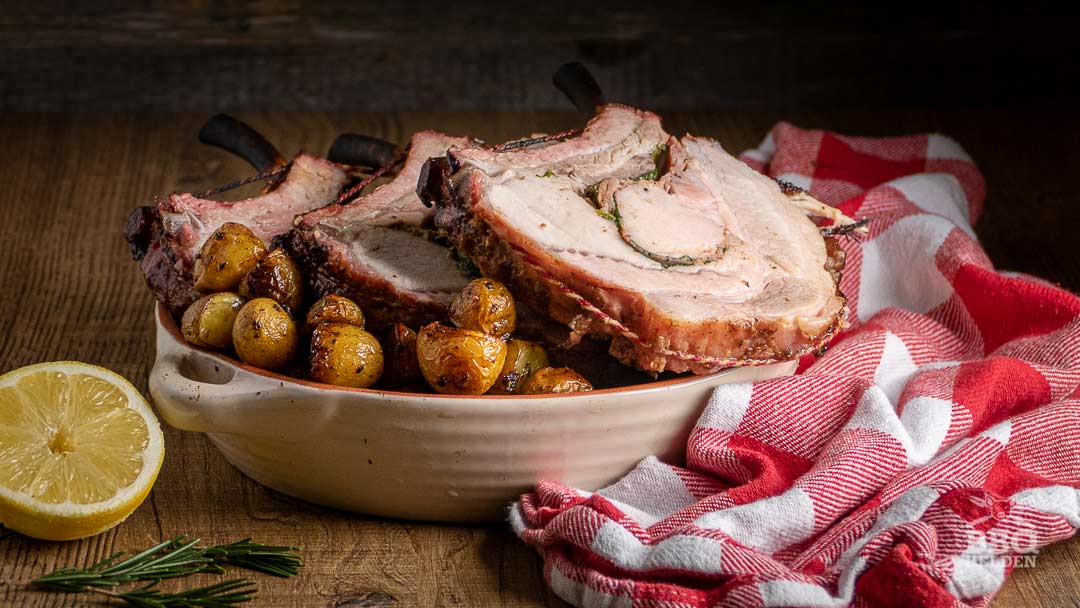 Few significant cuts of meat are as impressive and affordable as a full rack of pork. Everyone at the table thinks it is fantastic to see, and if you also stuff it, it’s the ultimate.

We filled this pork rack with fig jam and spinach. Just because it is possible and because we thought it would be tasty. And as it turned out, we were right. It may look complicated, but just remember, it’s just a huge pork chop. 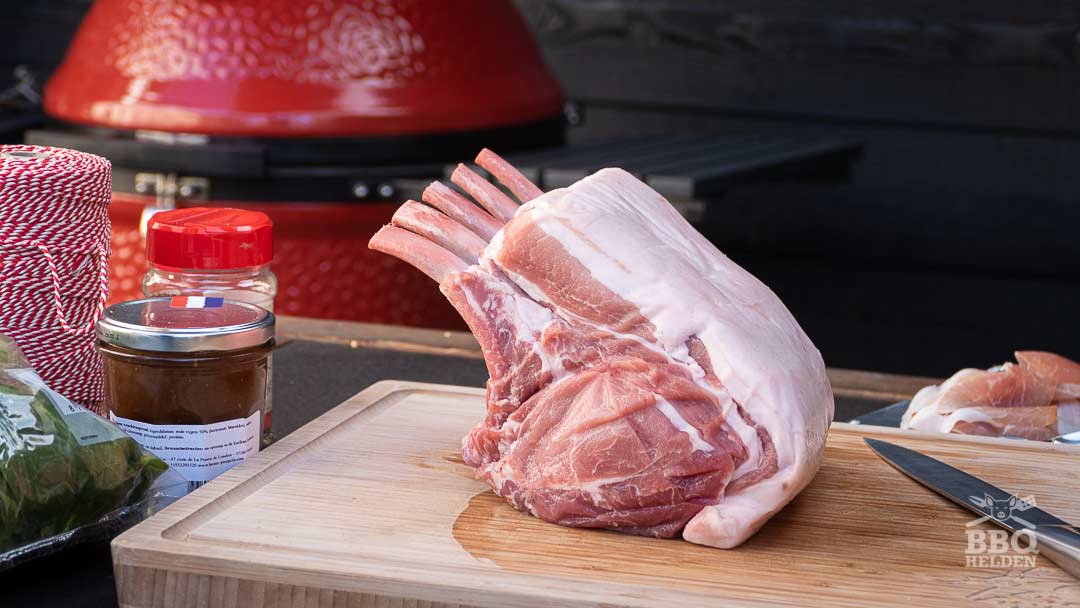 So this is a rack of pork. 5 pork chops at once with the bones frenched. This means that the butcher has done his best to scrape them clean. This rack has a thick fat cap that we can certainly appreciate. Because the meat is pretty lean, we can use this fat. Fat insulates and allows the meat to heat up slowly. 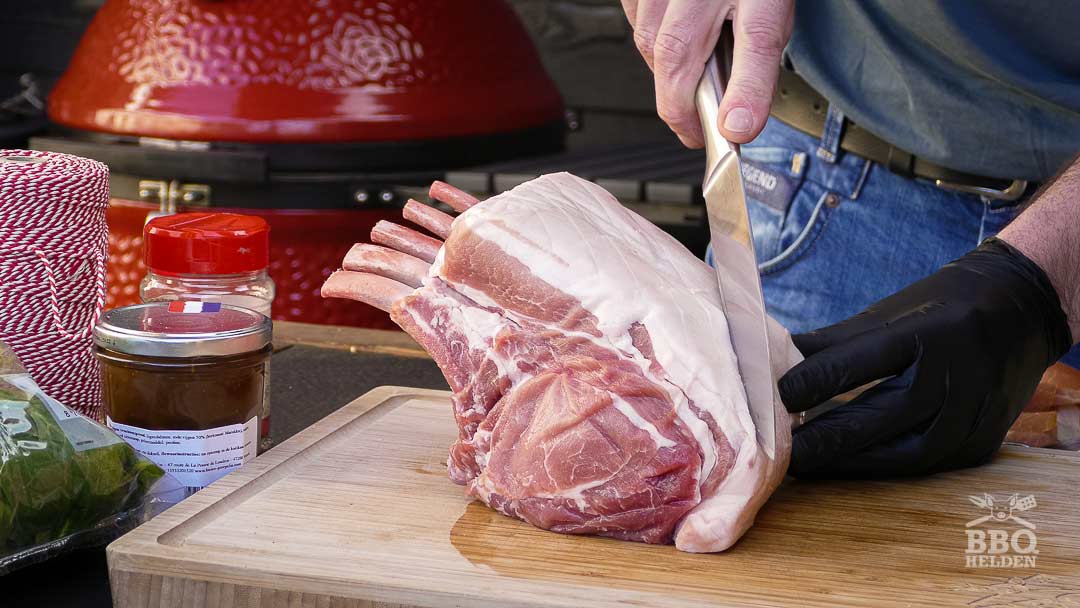 We like a piece of fat during dinner, but it has to be nice and soft. That is why we cut the fat crosswise with a sharp knife. Do this before you butterfly the meat. After butterflying and stuffing, you want to tie up the rack, so you no longer have the option to do this. 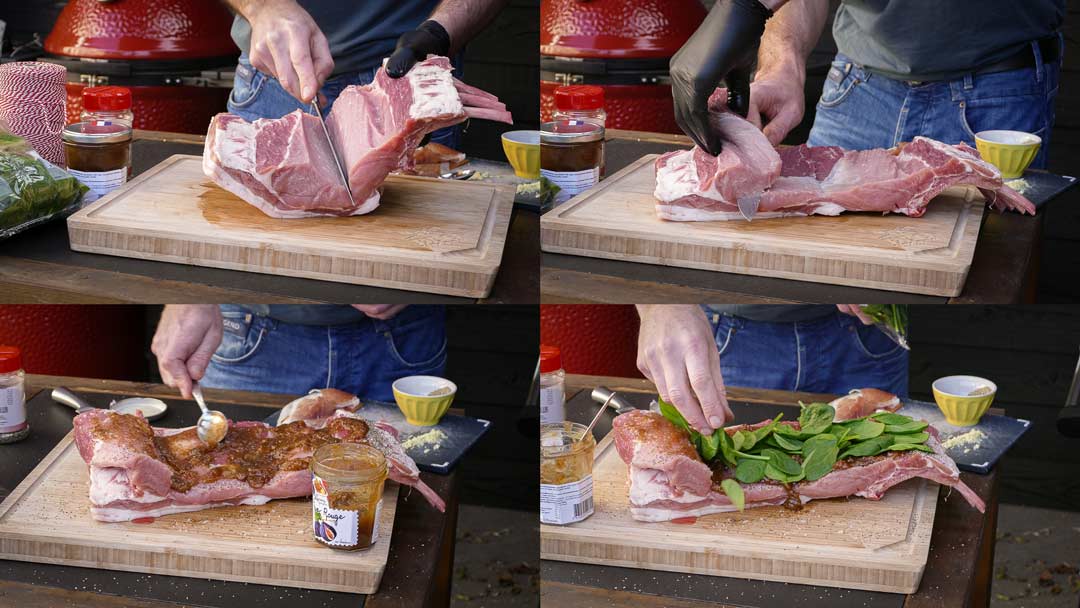 We are not a butcher and certainly do not claim that this is the best way to cut it, but it works. Cut the bones off the meat, but not completely. Stop 2 cm in front of the end, and then try to turn the corner and continue cutting until you have the fillet left. You cut underneath the filet so that you have one long piece of meat.

We then sprinkle the meat with salt and pepper, and garlic and then smear it with fig jam. Pork goes great with sweet. But we didn’t want to just go for sweet jam. Fig jam is just a bit chicer than just any cherry jam. However, we see that possibility happen someday. But that does not go well with the rest of the ingredients in this recipe such as the spinach, garlic and the prosciutto. 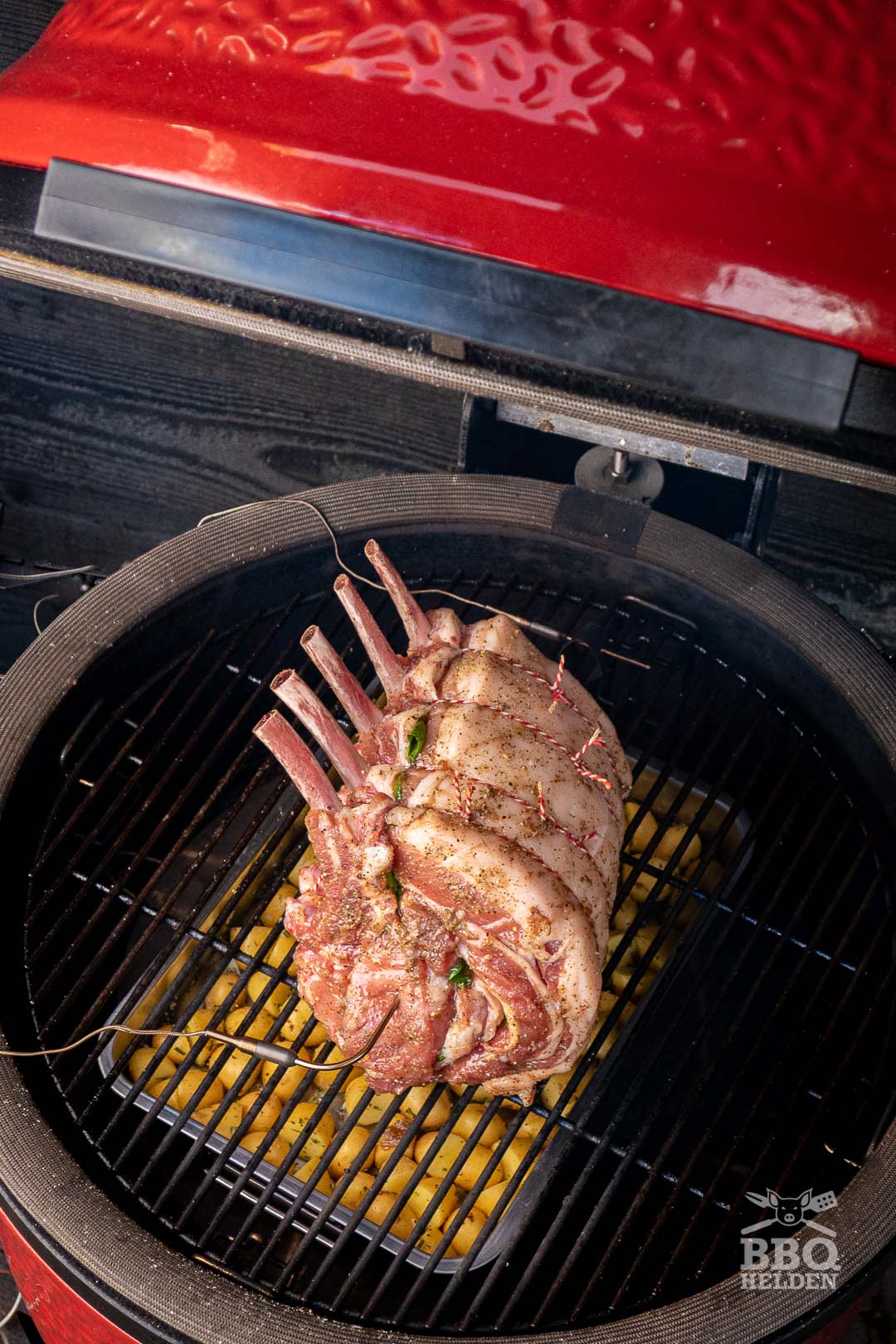 The melting fat from the rack drips onto the potatoes and makes them much better than they already are. These roasted potatoes are certainly not light, but who cares. Just eat a few less. 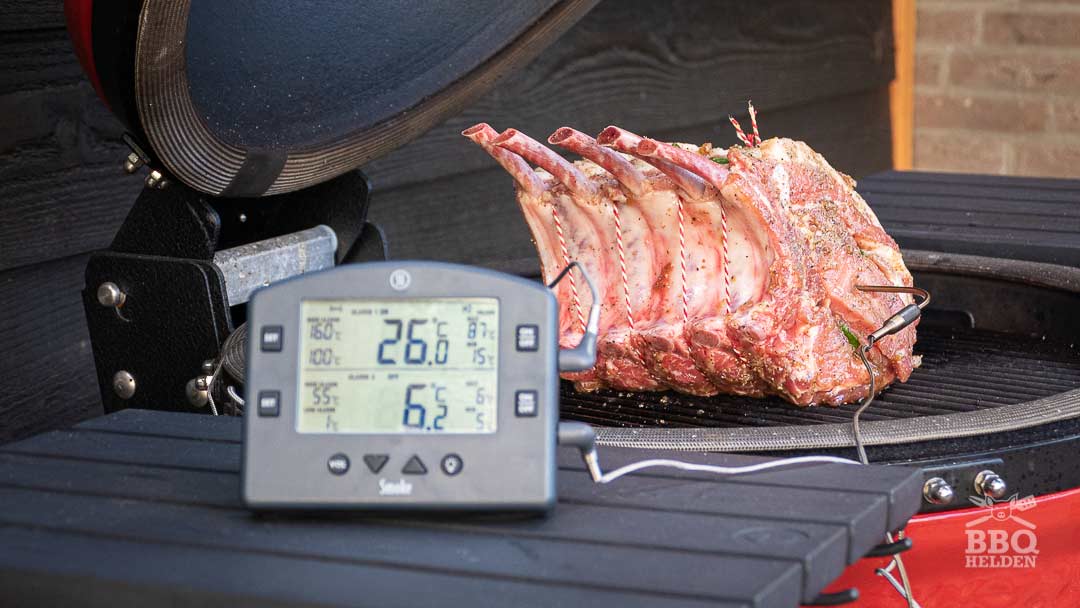 We always insert a core thermometer into the meat when we prepare larger pieces. Of course, it is very cool to barbecue “by feeling”. But guessing whether the meat is cooked to perfection or just too far so that it has become dry is just a shame. Invest in a good core thermometer and set it to the desired core temperature. Maybe not very cool, but you put a perfect piece of meat on the table every time.

The probe goes into the thickest part of the rack. Try to stick it into the meat and not the stuffed layer. We first set the thermometer to 55°C (131F). This way, we can see the condition of the outside of the rack and then decide whether we will continue at the same boiler temperature or increase the temperature slightly for a more admirable exterior. 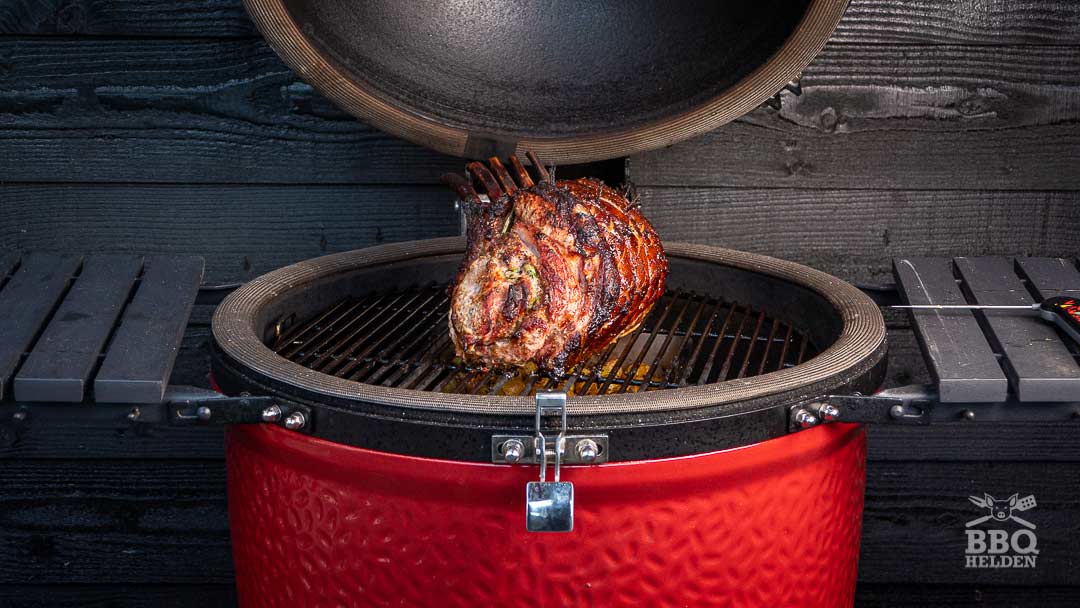 After the check at 55°C (131F) core, the outside could use some more colour. That is why we decided to raise the temperature in our Kamado Joe slightly to 200°C (392F). After an extra 20 minutes, the rack was to our liking. The fat has beautifully browned. Here and there you’ve got a few dark pieces that you as a pitmaster can pull off and eat immediately. You deserve that. 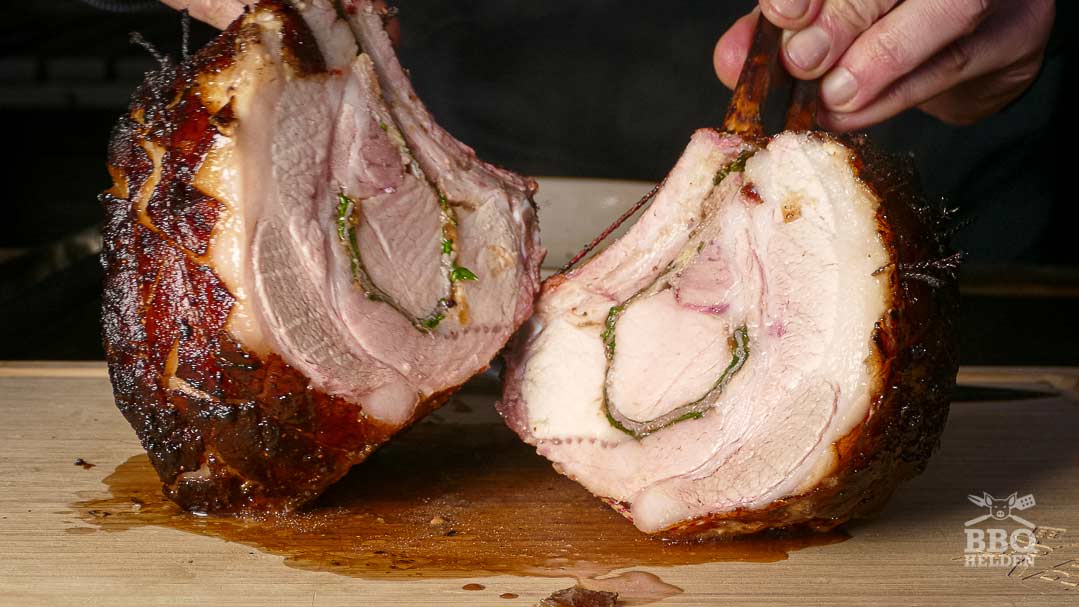 After resting, we can watch for the first time. The meat is just a little pink. That’s great with lean pork. Don’t be too scared of that. The meat is then wonderfully juicy. Just the way you want it.

When we stuff meat, we are always a bit disappointed that we don’t see it so clearly when we cut it in half. If you take it apart, you can clearly see everything, but you always hope you will see a thick filling layer after the first slice. 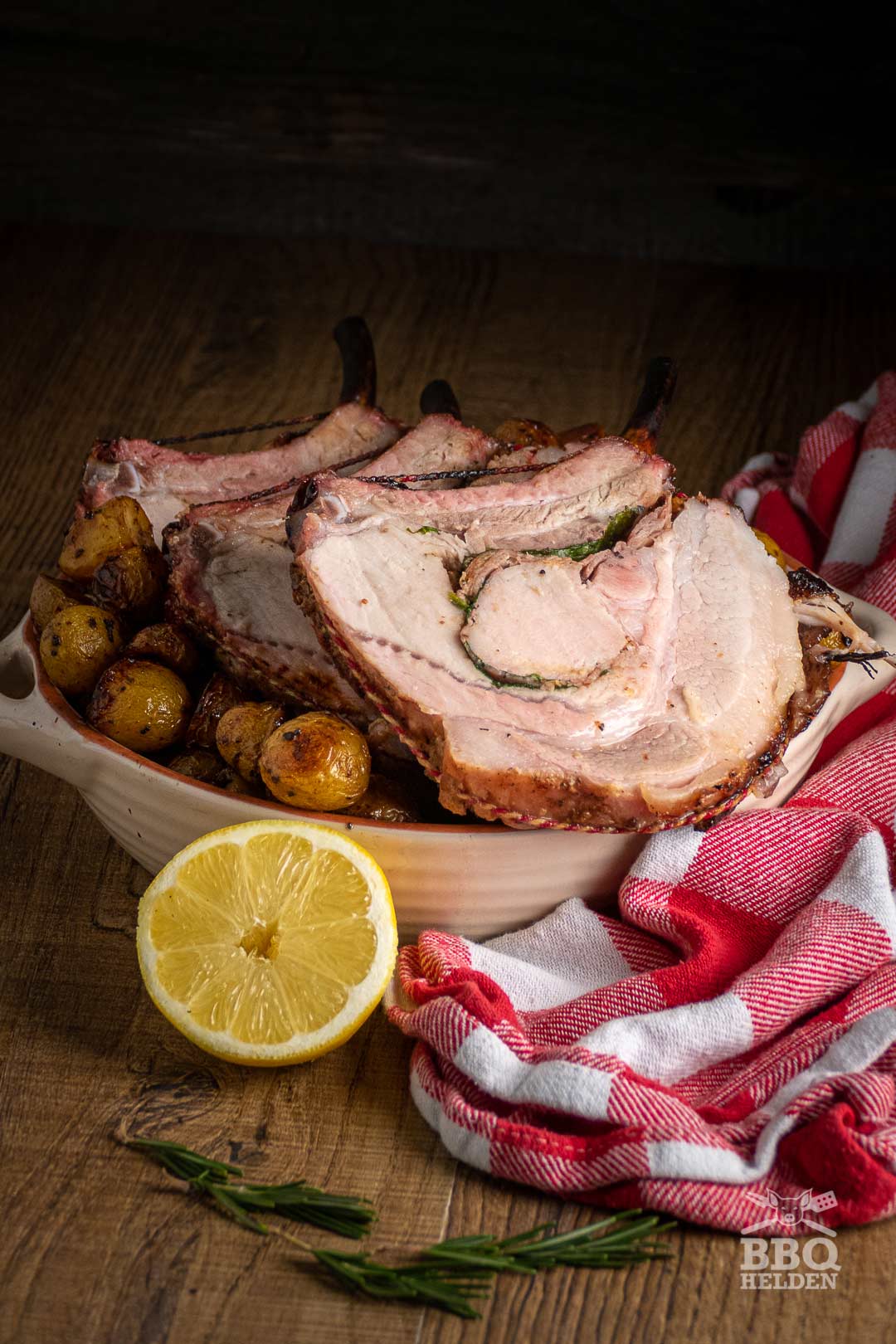 Do not forget to remove the potatoes from the tray. We had forgotten them but luckily found out in time. It would be such a shame that they burn while you admire your work.