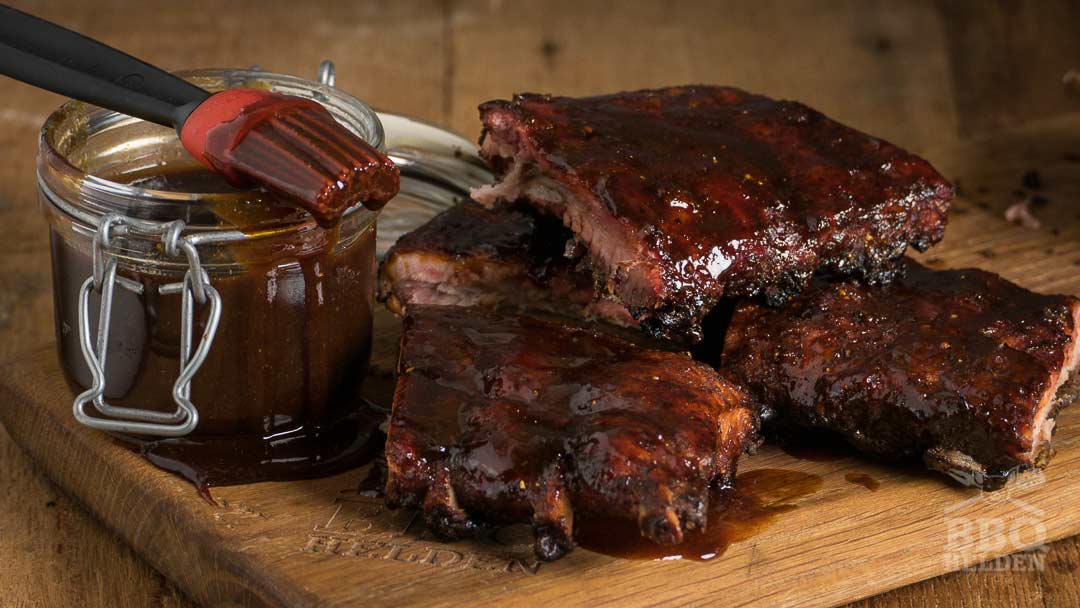 In the Netherlands, we love spare ribs. You see them on the menu in every restaurant over here. We rarely order them in a restaurant anymore. Once you can properly prepare them yourself, they are nowhere as tasty as those out of your own backyard.

This time we made a tasty Dutch variant. The dry-rub contains some cinnamon, and we made an apple syrup bbq sauce to go with them. These spare ribs are nice and sweet and get a nice kick due to the chilli pepper and chipotle. 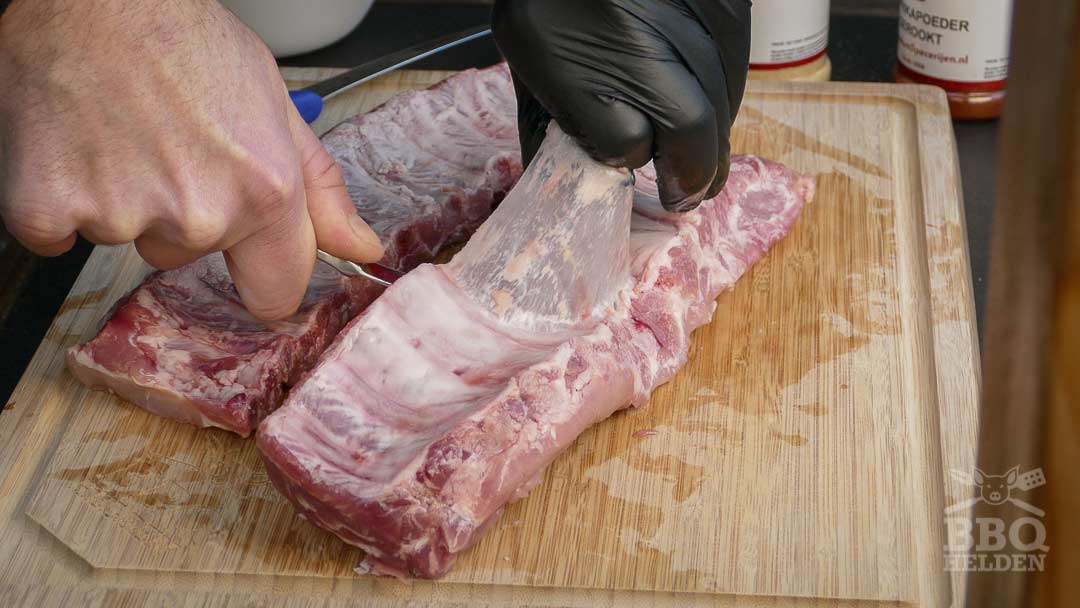 These are baby back ribs. You could also use real spareribs, but then you have to take into account a slightly longer preparation time because the meat is somewhat tougher.

The only thing we do with the ribs is to remove the membrane that is on the bones. You press a dull knife between the bone and the membrane somewhere in the middle until you can put a thumb under it. Then you pull the membrane from the ribs. Then it’s only a matter of applying the dry rub. 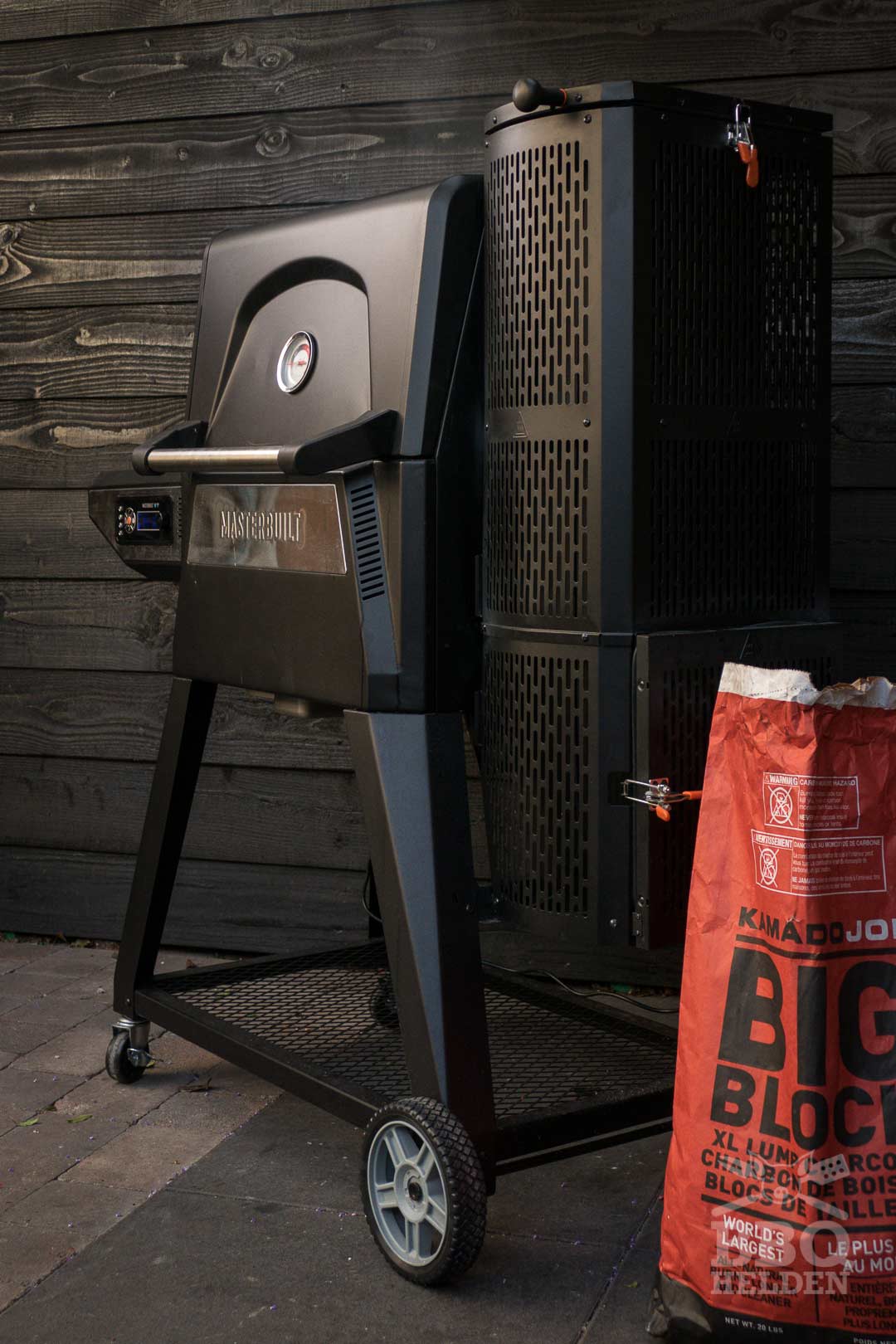 We are going to smoke these spare ribs on the Masterbuilt 560 gravity fed smoker. As far as we are concerned, the 2020 barbecue. You fill it up with charcoal. Light it like a fire-starter, set the temperature, and you can start grilling within 15 minutes. 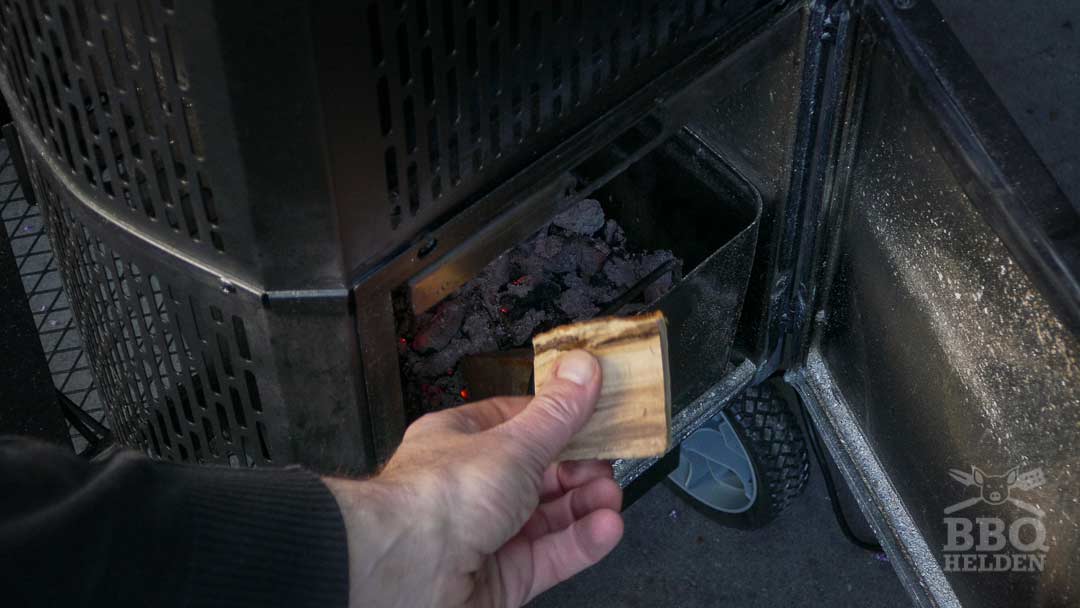 You smoke through the ashtray. This way, you can decide for yourself when and how much smoke you want to add. We smoke these spare ribs with 2 chunks of applewood. This ensures a mild smoke flavour that goes well with these spareribs. 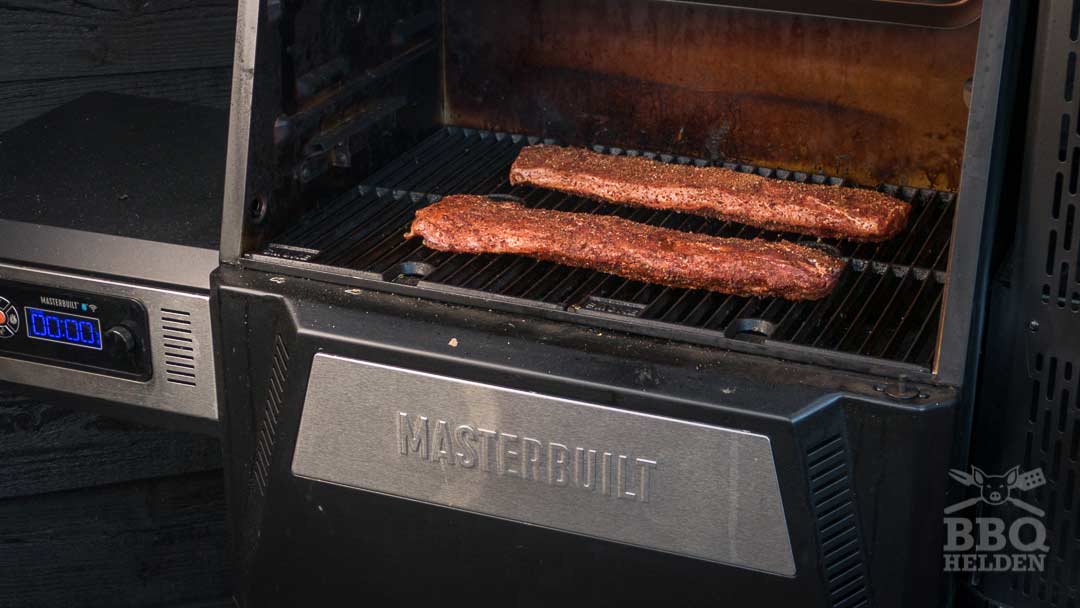 After rubbing, we put the spare ribs bone down on the grates. And so we just leave them during the entire preparation. We are not going to wrap them. They do not become fall-off-the-bone tender, but they certainly become very tasty. 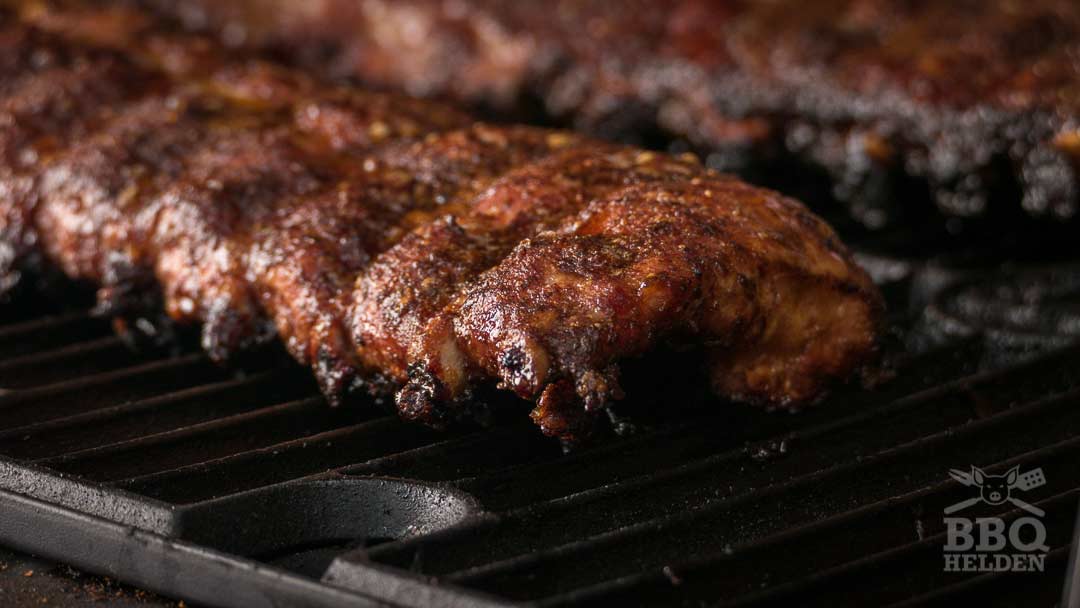 This is the result after an hour or two at 140°C (284F). Beautiful golden brown spare ribs with an attractive bark from the dry rub. The meat is pulled back slightly so that the bones are visible. That is the sign that things are going well. 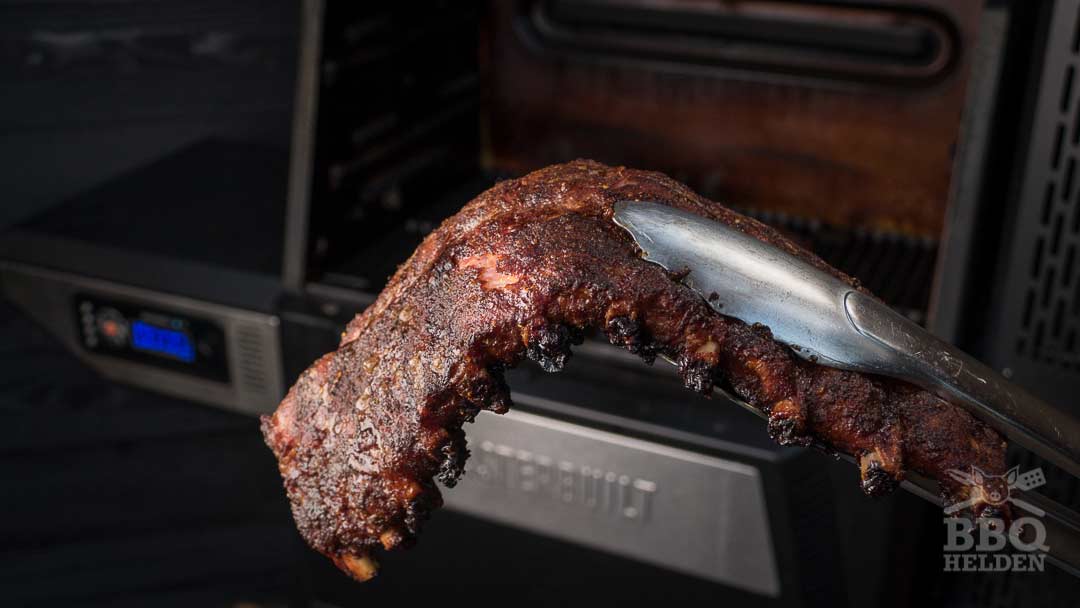 We never cook spareribs on temperature, we simply pay attention to the tenderness of the meat. This time we use the break test. If you grab the spare ribs with tongs, you can see where the meat start to break.

We grabbed these ribs somewhere halfway. Now you see the meat break above the 6th rib. Just the way we want it. If you want the meat to be more tender, do the break test while holding the spare ribs a little further up. If you want them with a bit more bite, grab them by 2 or 3 ribs. 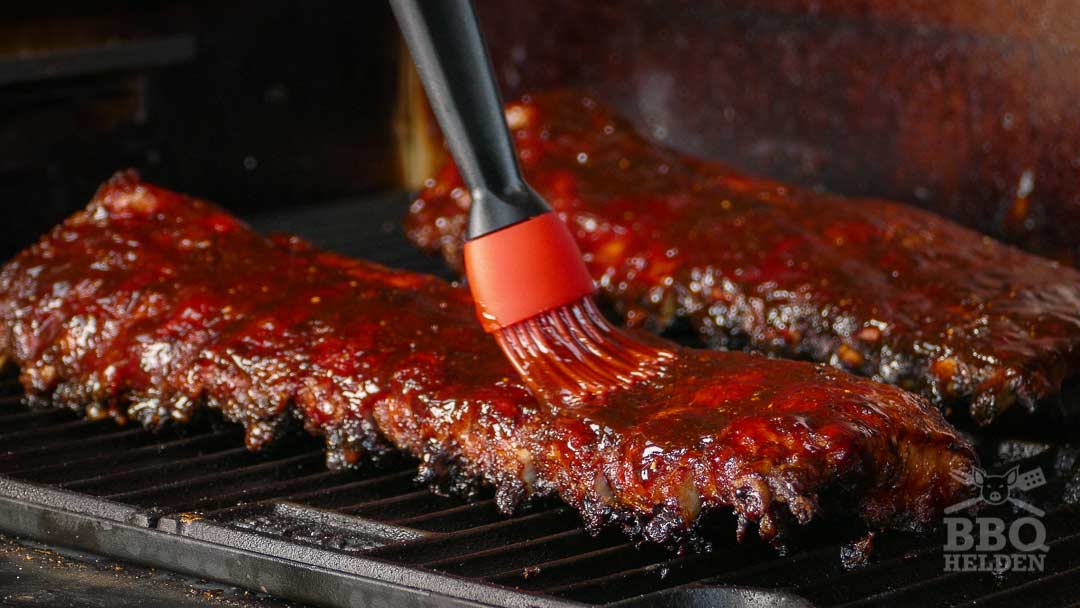 When the spare ribs were smoking, we made the apple bbq sauce. That is relatively easy. Just mix heat and stir a few times. For the last 10 minutes in the smoker, we brush the spareribs with it. The sauce will caramelize slightly and become nice and sticky. 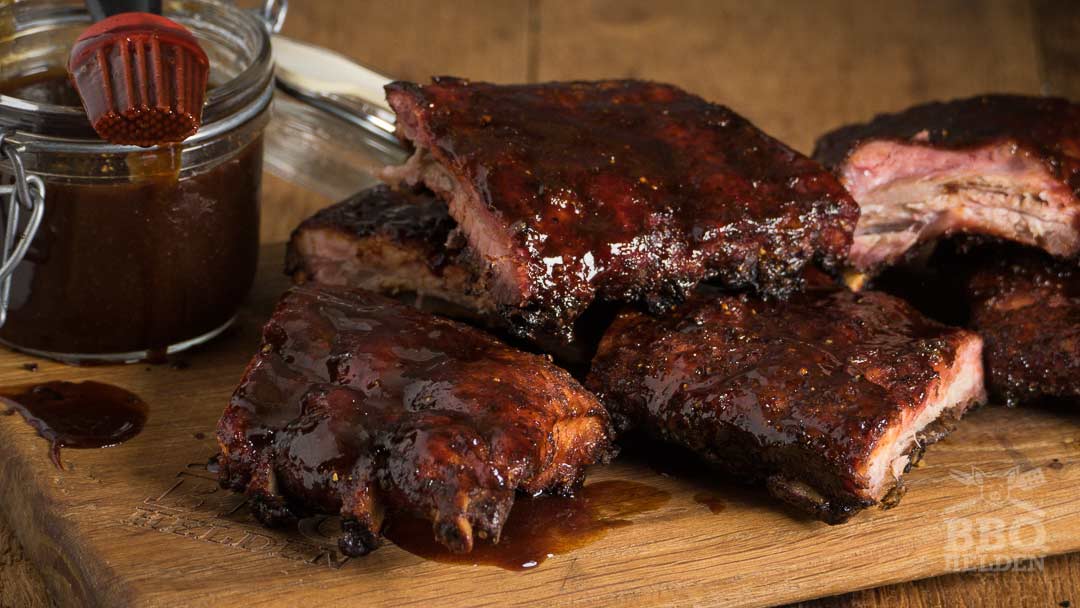 To make them extra tasty, brush them again just before serving them. You do have to take a shower after dinner, but it is all worth it.