Pasta dish with zucchini and chorizo 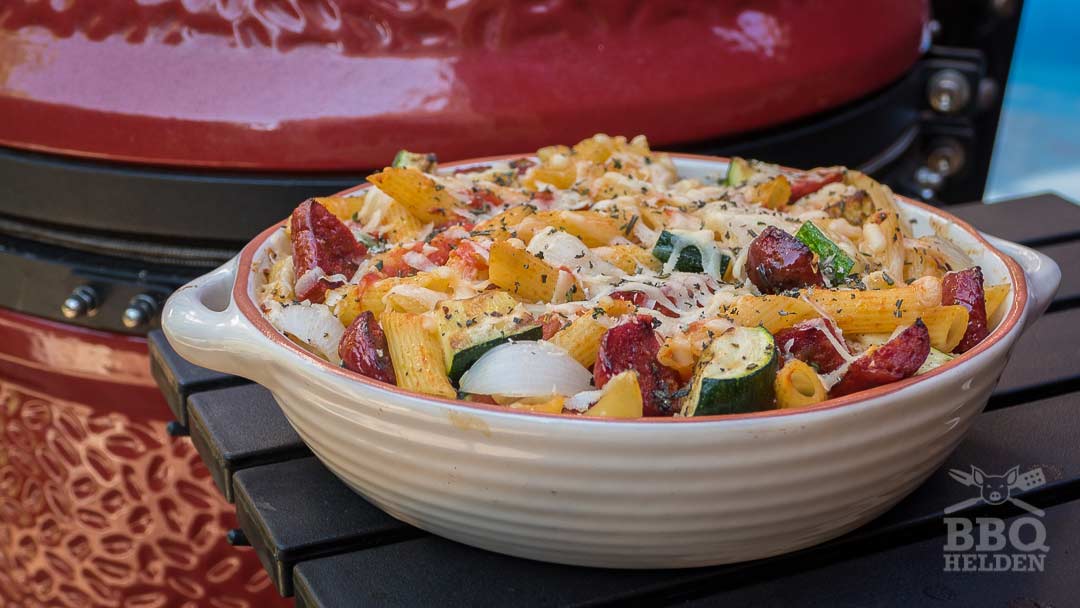 Make sure you always have a pasta dish on your recipe list. Everyone loves pasta, and this dish is just too delicious to not try. And you can make it entirely on your kamado. We use 3 different techniques to make this recipe.

This is why we love our Kamado Joe so much. Due to the design’s versatility, there is little that we cannot create on this barbecue. 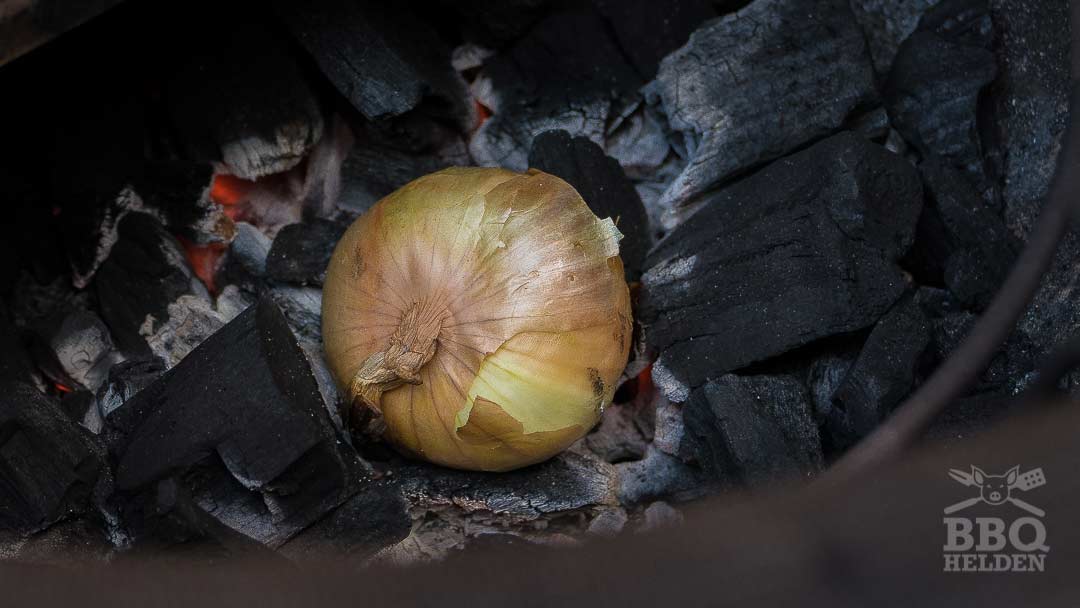 When the kamado is at the right temperature, you just throw the onion between the coals. They call this caveman style barbecue. The first person to do this had simply forgotten the grid and had to come up with a name.

And yet it is a really cool way to cook. You can prepare onions, beets and bell peppers very quickly. Immediately you get that primal feeling when you do this. 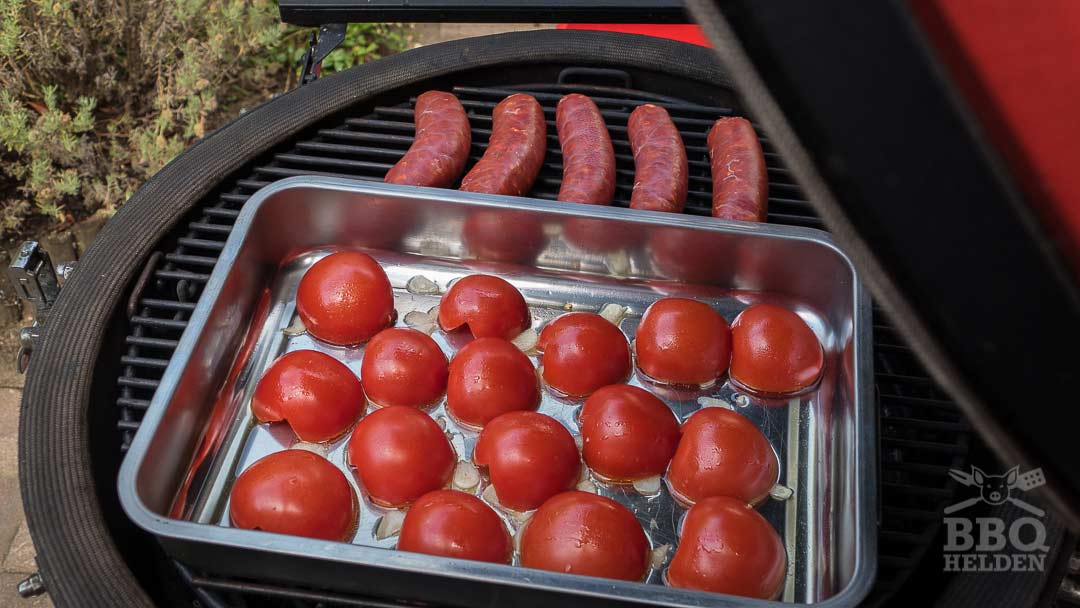 Then you place 1 of the half plate setters so that you get 2 zones. We have delicious Iberico chorizo ​​sausages that we put above the plate setter to heat up. The oven tray with the half tomatoes goes above the direct side. This way, you can leave them for half an hour. Just enough time for a first beer. 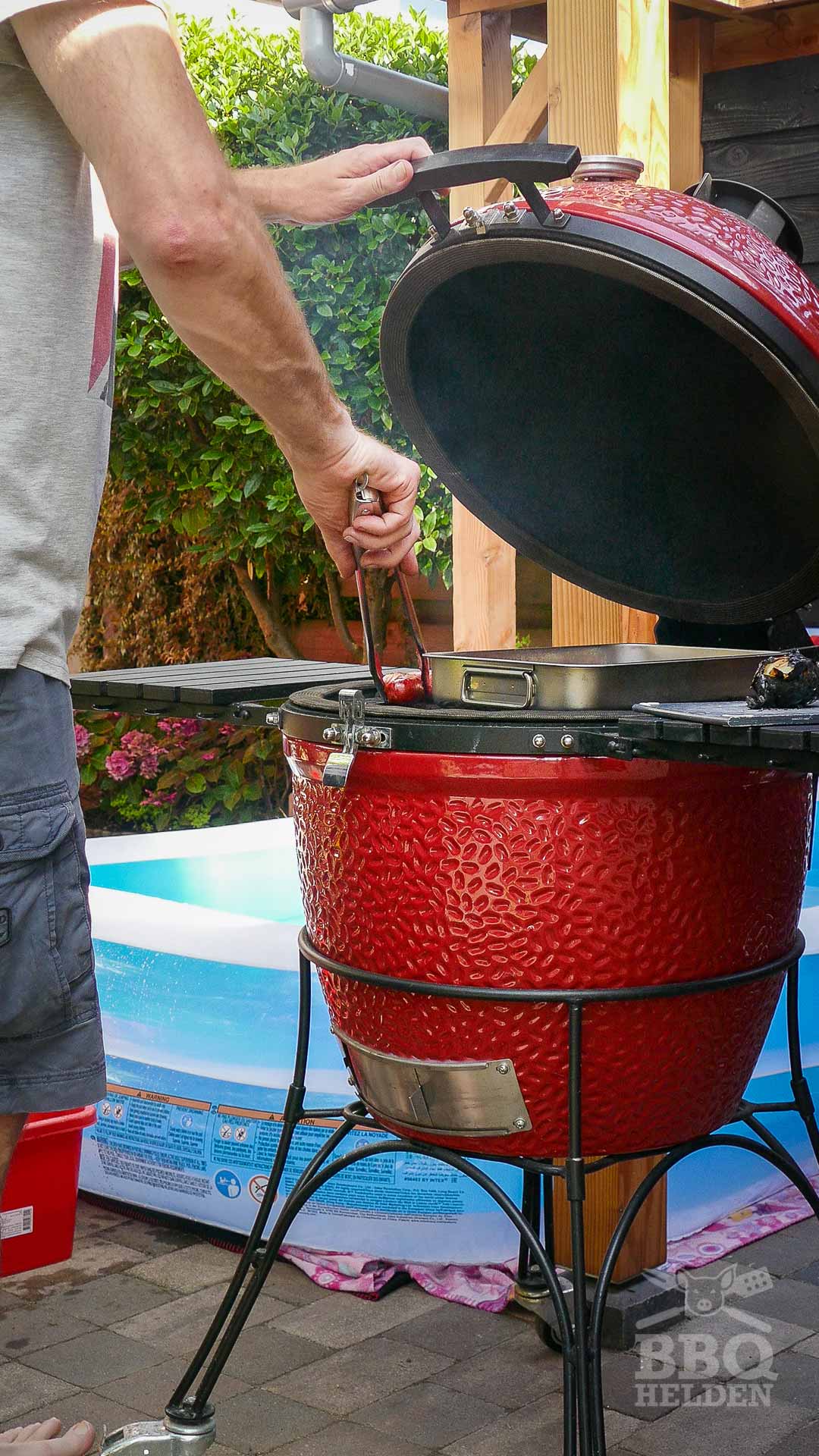 In the summer, especially when it is too hot, our barbecues have to make room for the swimming pool. I don’t care. You can cool off during the walk to and from the kitchen while you walk through the pool. 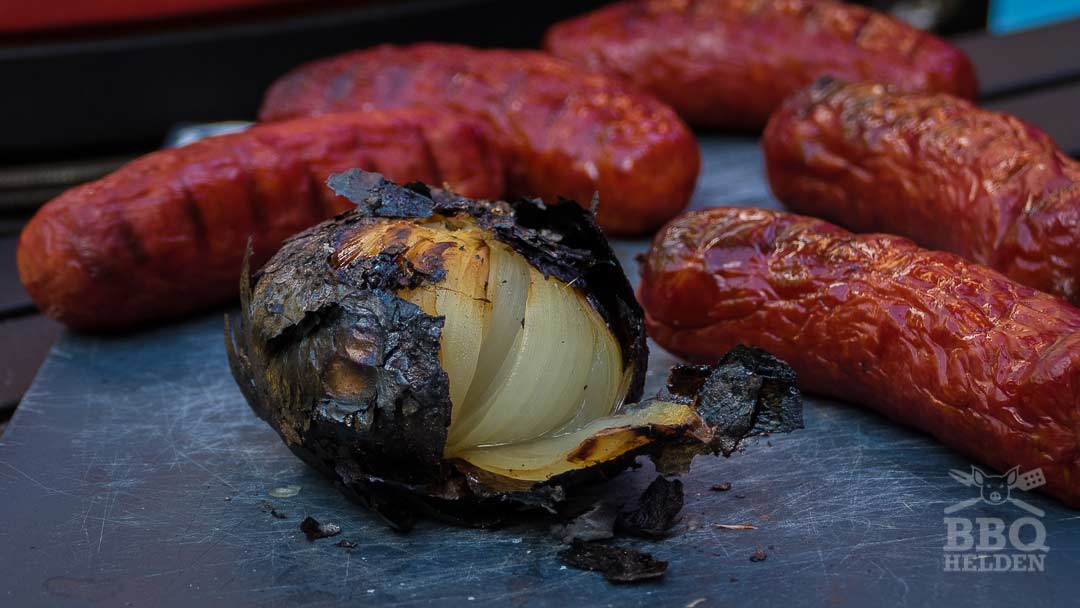 The sausages can be removed when the skin has shriveled. You can also fish out the onion between the charcoal. The outside is entirely black. If you peel off the burned skin, you will find a wonderfully cooked onion. 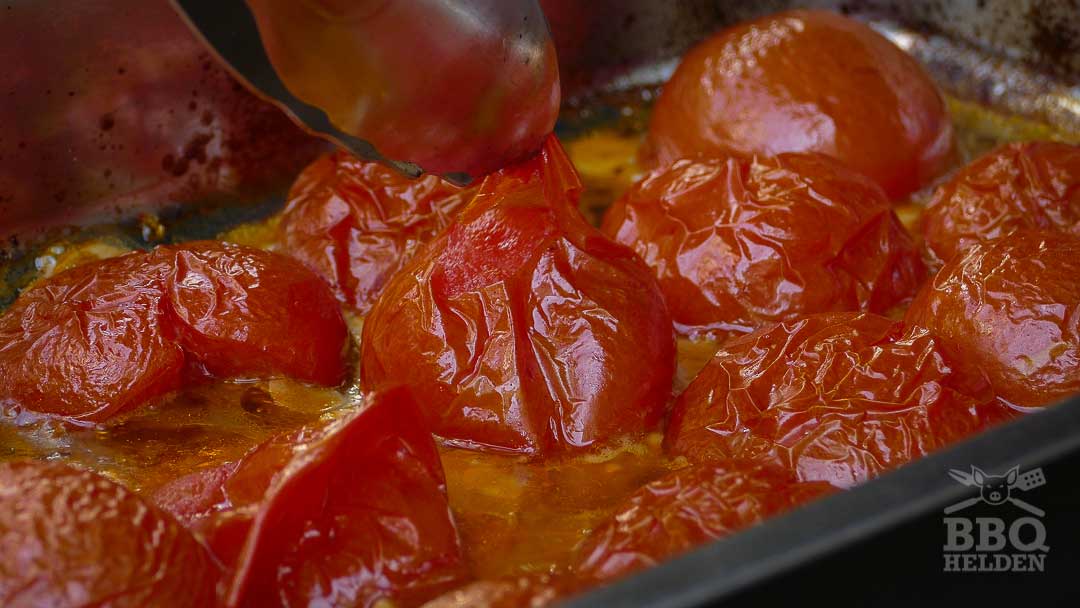 If the tomatoes look the same as the sausages, you can easily take the skin off. You can also leave them on, but you will have to put them through the blender later. 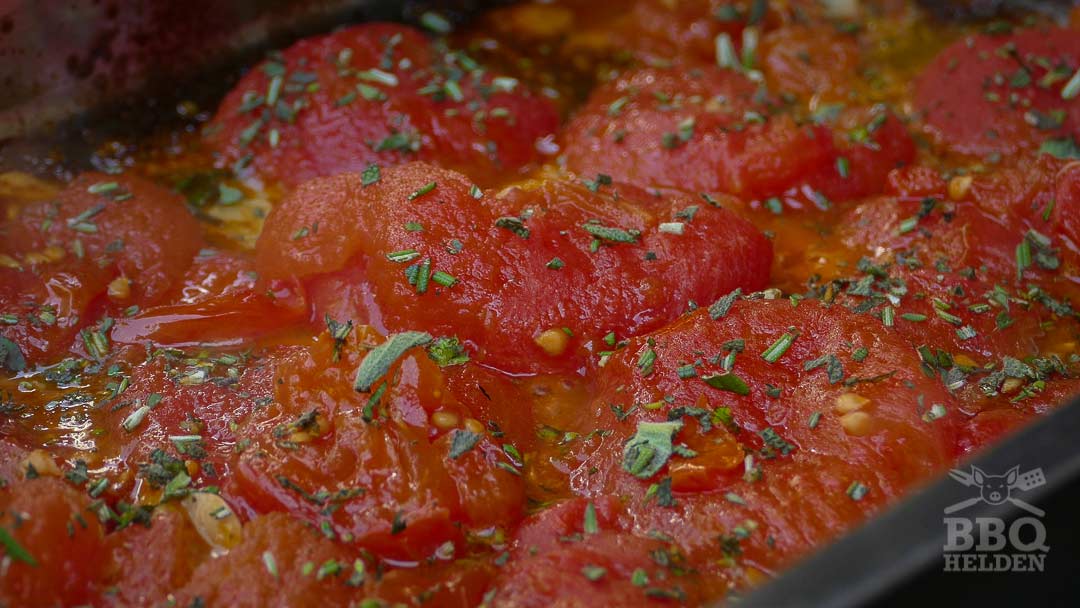 Now sprinkle the skinned tomatoes with some fresh Italian herbs and a little salt and pepper. Think thyme, rosemary, basil, and oregano. At the supermarket, you will find packages with an assortment of fresh herbs. A handful is enough. This way, you let the tomatoes stand for another 10 minutes. 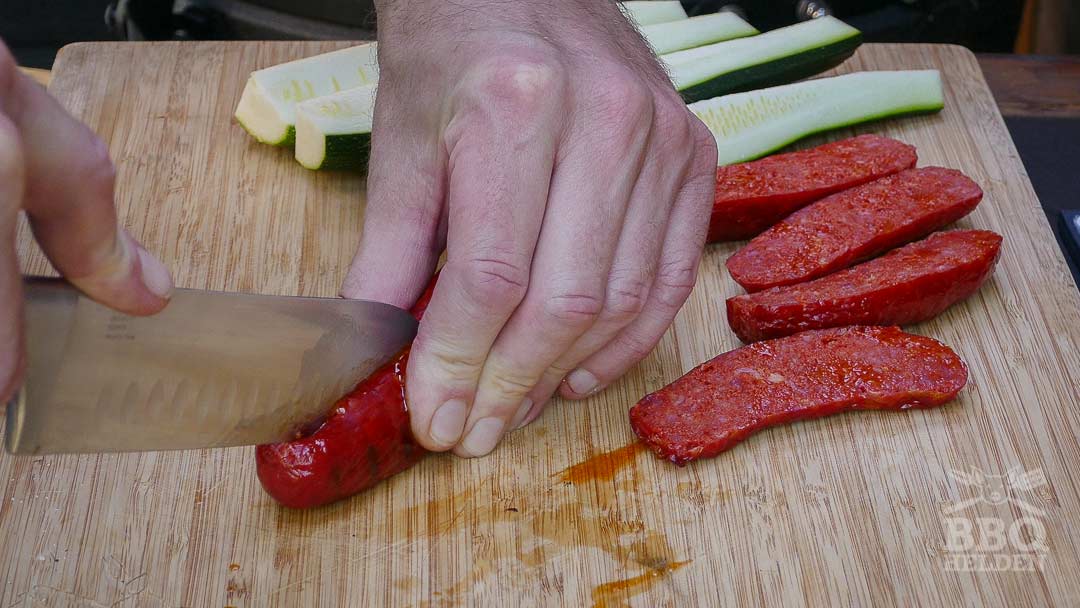 We now cut the cooled sausages in half. Cut the zucchini into quarters along the length. This is easier when grilling. After grilling, cut them into smaller pieces. 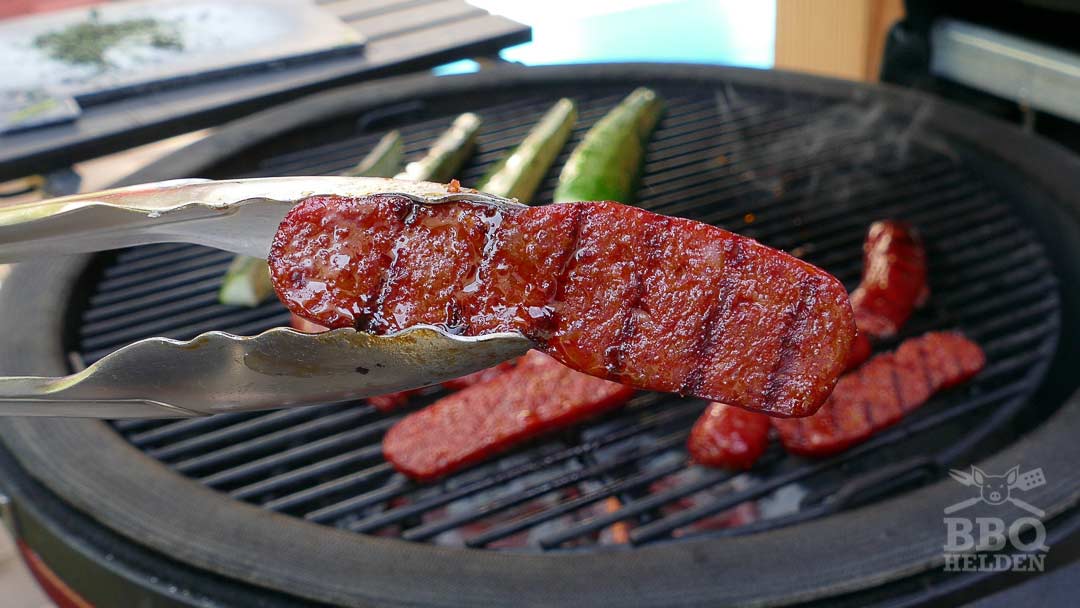 We have already done several types of preparations. Now we are going to grill. Sausages, in particular the fatty ones, are so tasty to grill. You will find those crispy pieces of grilled sausage in the pasta. At the same time you roast the zucchini all around.

The pasta we cooked in the kitchen. Toss the cooked pasta into a baking dish. Puree the tomatoes and pour this over the pasta. Then the zucchini, sausages, and onion on top of that. Top it off with a little fresh Parmesan cheese and then put the baking dish in the barbecue for a few minutes to let it melt.

Isn’t this a perfect summer pasta dish? By the way, if you have vegetarian guests, you will, of course, serve the chorizo ​​sausage separately.