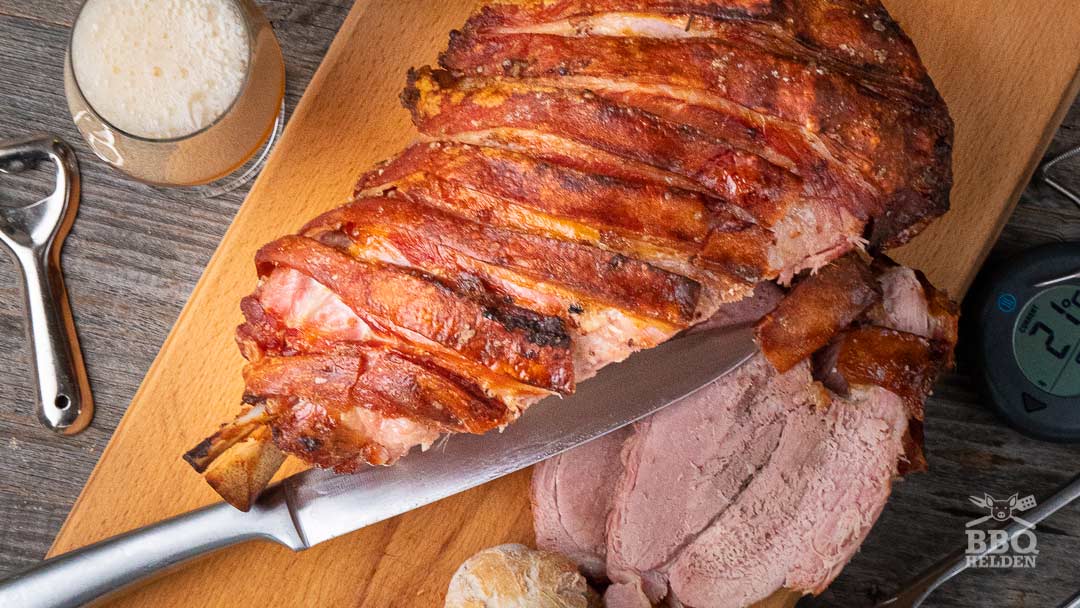 We were asked a lot how to prepare ham and end up with crispy skin. It’s actually not that difficult. It only takes a few days and some space in your fridge.

We have made this recipe several times, and we believe this preparation is the best way to ensure tender and juicy meat with great crispy crackling. 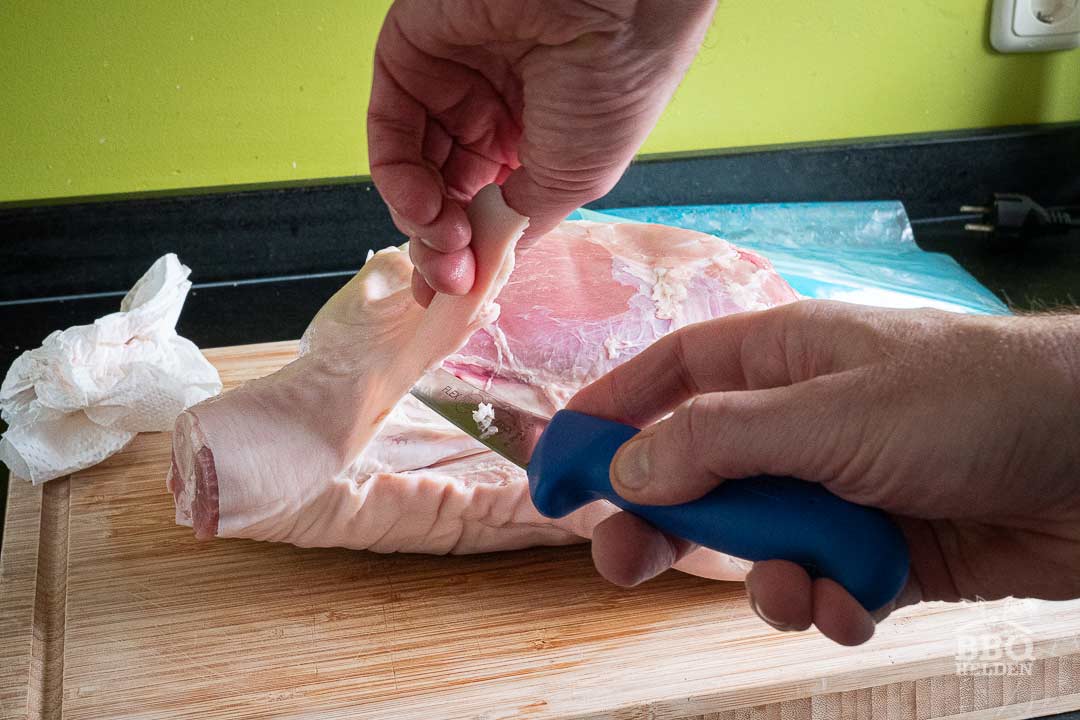 For this ham, we bought a ham from a piglet. The piglet didn’t sell us this ham. You know what we mean. This one is 4.5 kilos, but you can, of course, buy a smaller one. The preparation is minimal, but it does take some time.

The first thing we do is remove the skin, fat and silverskin on the underside of the ham. In general, the skin on that side will already be cut away for the most part. We cut off the fat and the rest of the skin because we will brine the ham. If you leave the fat, and especially the silverskin, in place, the brine will not or hardly be able to penetrate the meat. 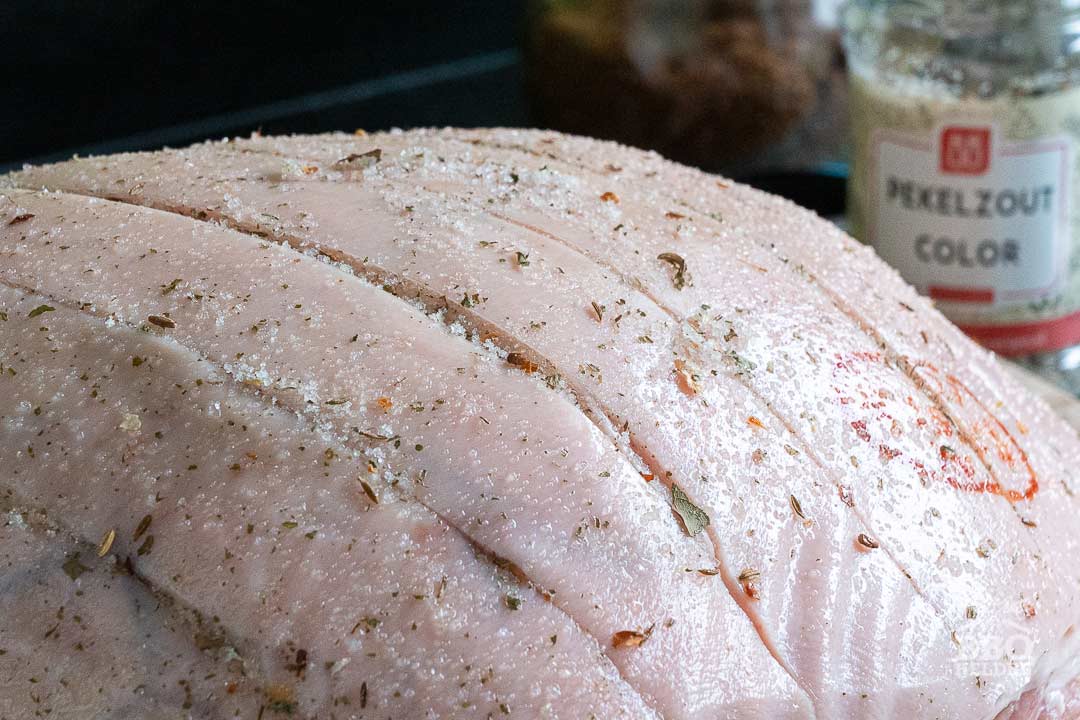 What is curing salt

We use pink curing salt to brine the ham. Curing salt is nitrite salt with various other herbs and spices initially intended to prevent bacterial growth in the meat, so it has a longer shelf life. The nitrite also ensures that the meat stays nice and pink during cooking and looks better.

We tried two hams and brined them wet and dry. For the first ham, we dissolved the curing salt in water and made a wet brine in which we put the whole ham for two days. We rubbed the second ham with curing salt without water and packed it in a ziplock bag. In the end, both hams tasted delicious, and the meat was a lovely pink. But ultimately, working with a dry brine is just easier, so we recommend that you do that.

We cut the skin of the pork down to the meat. We do this so that the fat under the skin can melt away more quickly so that the skin becomes very dry. Then we rub the brine on the meat and in the cuts of the skin. The meat quickly absorbs the brine and takes the nitrite with it. The rest of the herbs and spices don’t get any further than a few millimetres because those molecules are simply too big. 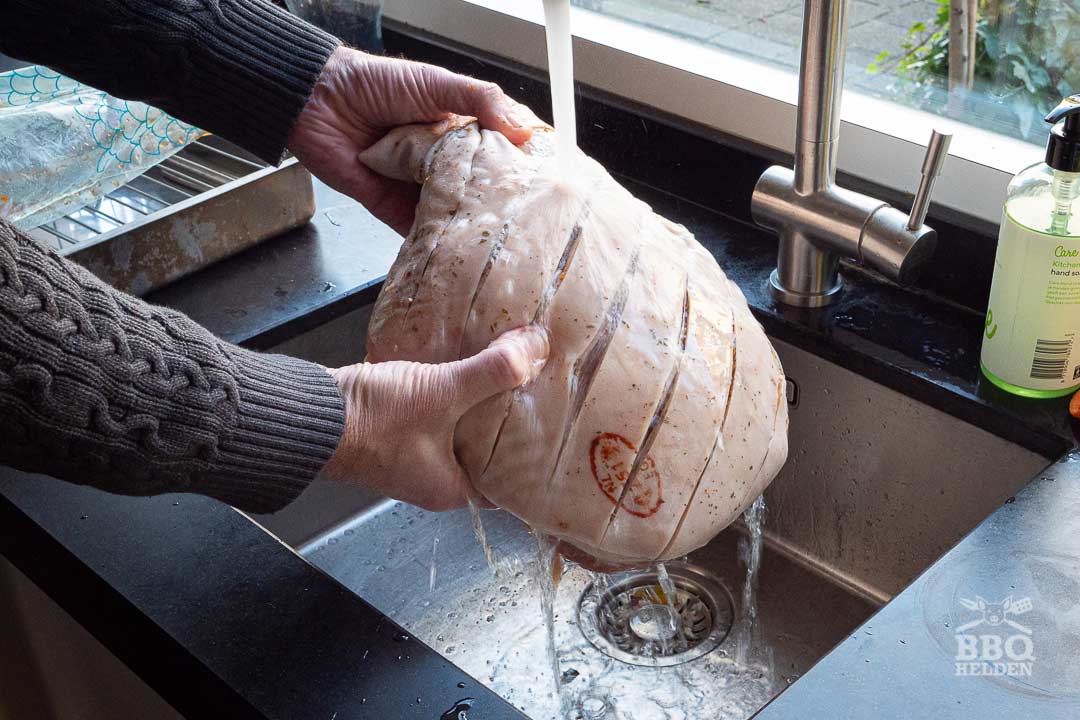 After two days of brining, we rinse off all the salt on the outside of the ham under running water. Sodium nitrate is a valuable means of combating botulism, but it is not immediately healthy. Small children and pregnant women are advised not to eat it. Don’t worry too much because you have been eating it for years because it is used in many ready-made types of meat.

Simply run the ham under a running tap and let the water wash away any salt on the outside. Then pat it dry with kitchen paper and place the ham on a drying rack. 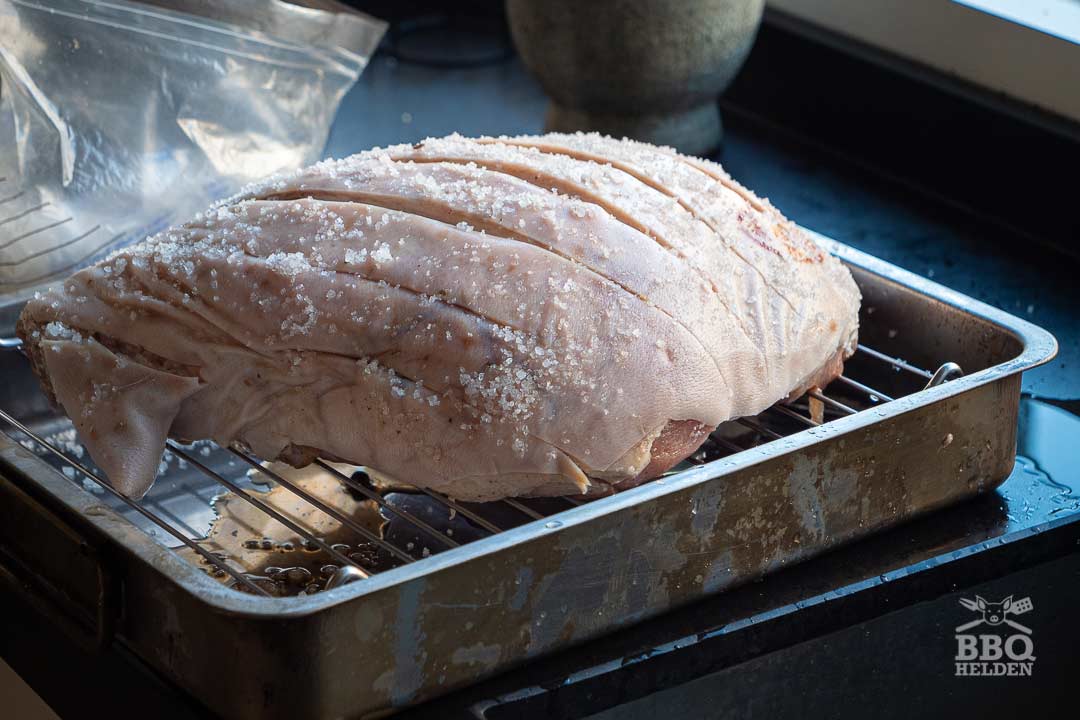 First, we rub the meat side with brown sugar and then comes the 2nd step, in which we try to make the skin even drier than it is right now. We rub the skin with coarse salt without getting a lot of salt in the cuts. This way, we extract even more moisture from the skin. We will not package the ham now but put it overnight in the fridge with an oven dish underneath. 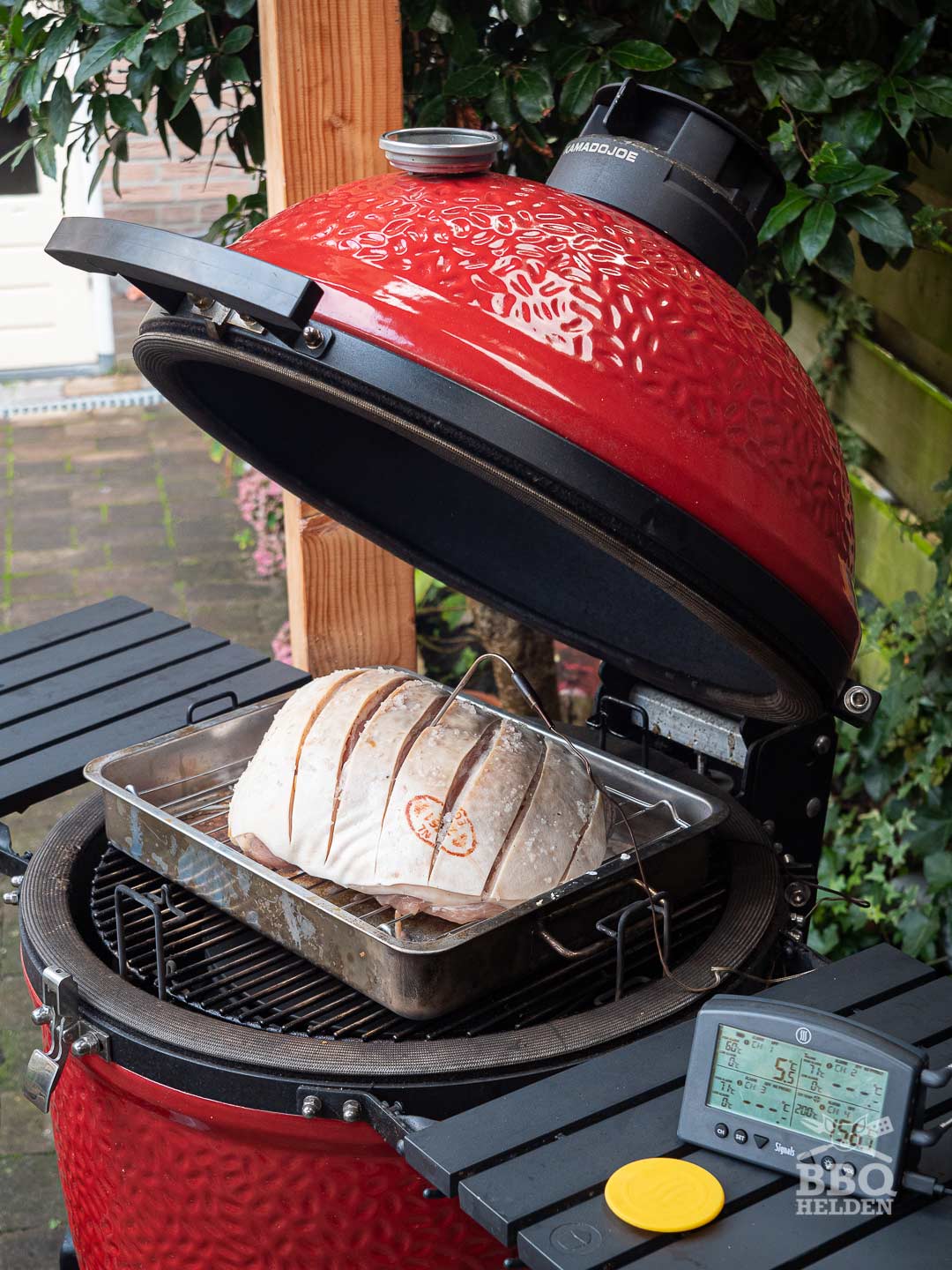 By the way, this is the Koncis oven tray with a rack from IKEA. The tray fits perfectly on the grates of our Kamado Joe classic. This way, you immediately have a dripping pan that catches the melting fat without your entire kamado getting dirty inside. This way, you also prevent possible grease fires.

How to set up your kamado for a crispy skin 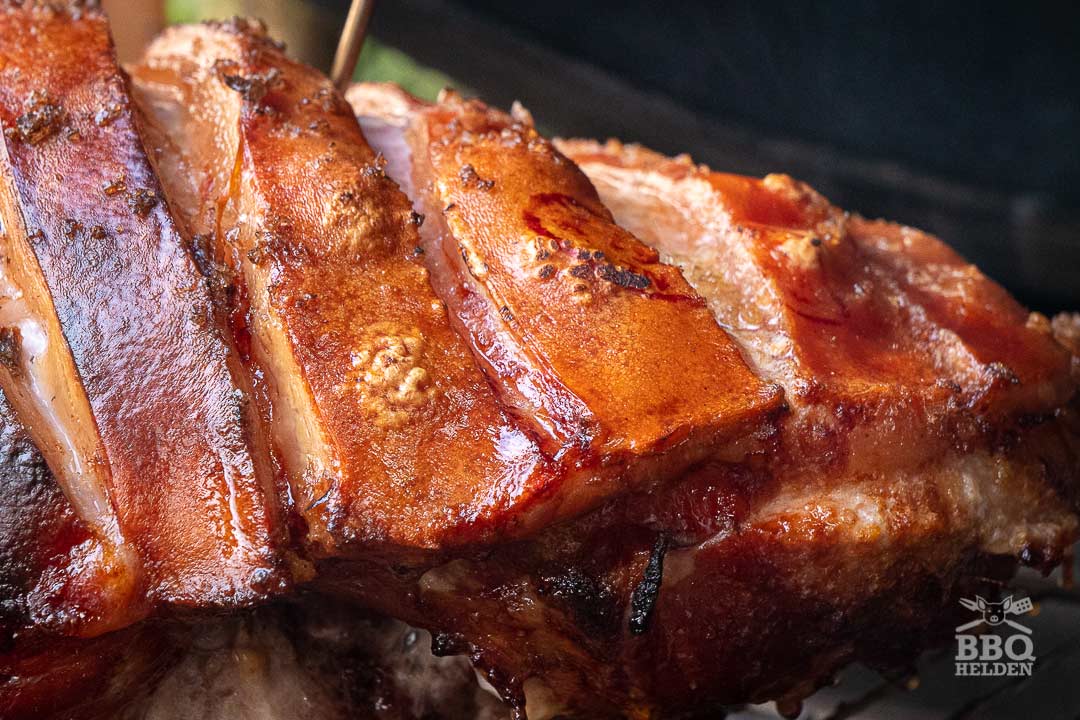 It turns out unnecessary because the skin looks like this after two and a half hours when we open the lid. Here and there, we even see that the skin starts to puff. When this happens, the skin is as dry as foam. The sides could still be a little drier, so we quickly closed the lid to let the core temperature rise another 5 degrees. 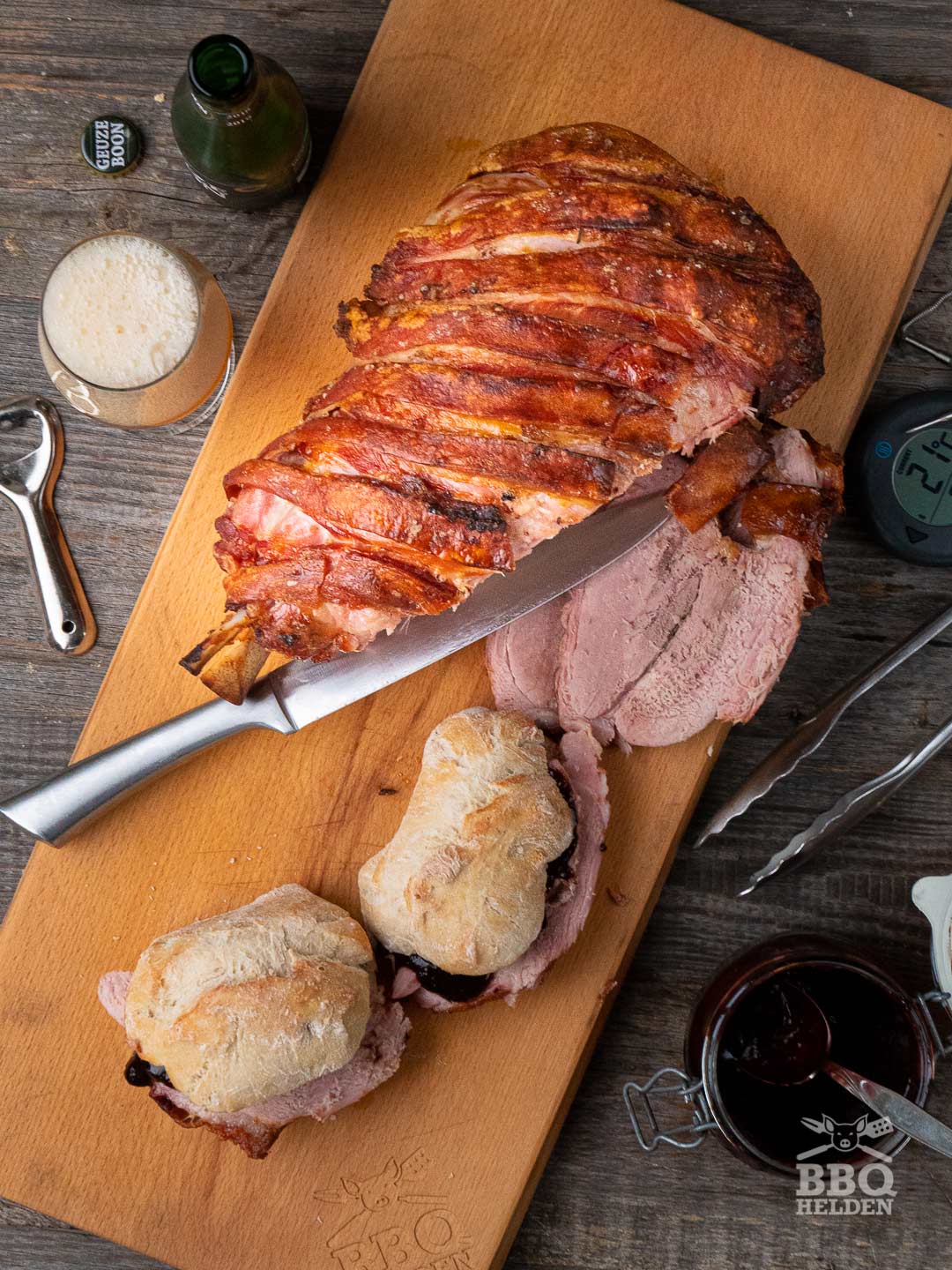 This is our ham with crispy crackling. Cut the ham into slices for a few delicious sandwiches. Break the crackling from the ham and serve it in small pieces. You can store the ham very well and reheat it later or eat it cold on bread.

If you try making this ham with crackling, let us know in the comments below. Or better! Tag @bbq.heroes so we can see what you made.