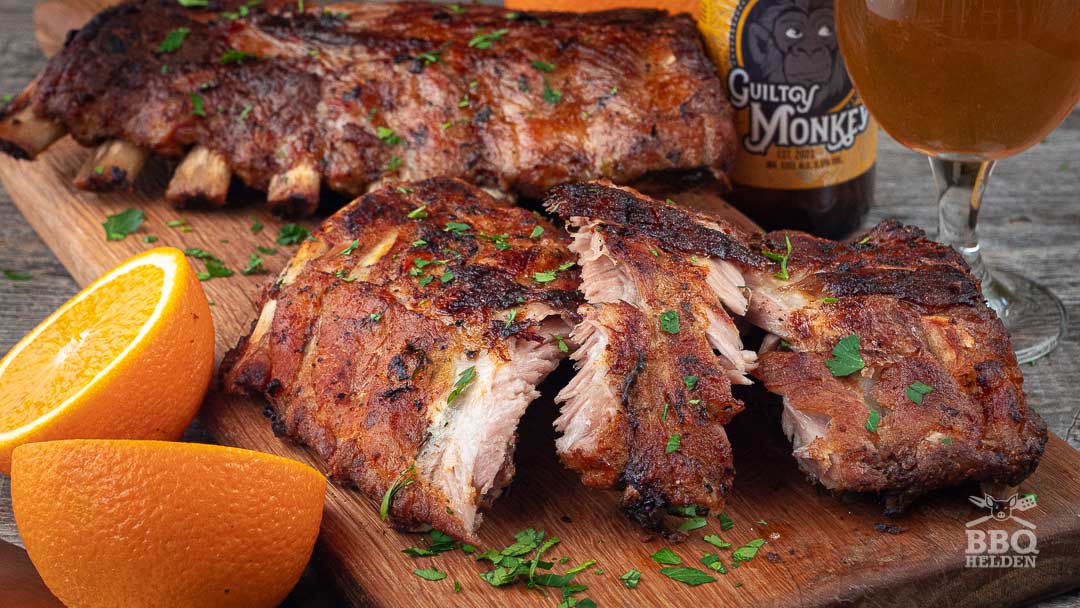 There are several ways to prepare costela de porco (pork ribs) in Brazil. In general, an acidic marinade ensures that the meat is wonderfully tender so that the spare ribs do not have to cook for another hour. We help the whole process a little so that you can put these spare ribs on the table in two hours. 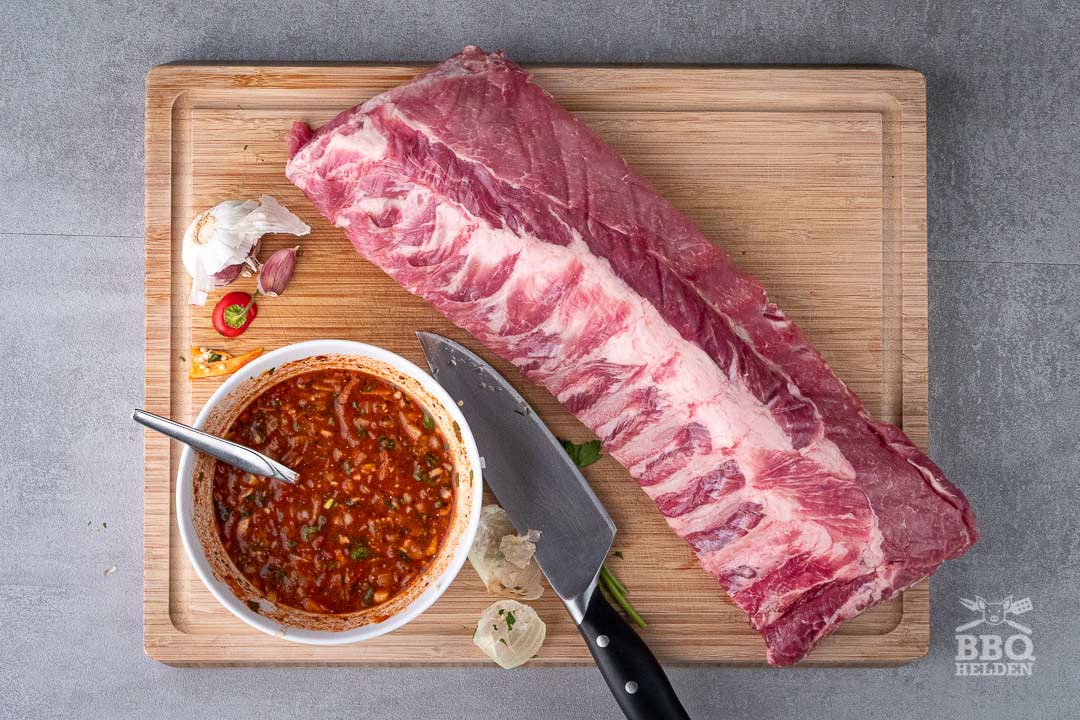 You have different types of spare ribs, but we have made our choice. We prefer to use the larger baby back ribs from Swift. These are much longer than the Dutch spare ribs we are used to and also nice and thick. With these spare ribs, there is no shame in sharing.

The marinade is a great mix of orange juice and lots of garlic. We have almost a whole bulb in the marinade. The meat will not taste excessively of garlic. During marinating and after heating, a milder garlic flavour remains on the meat that everyone can appreciate. 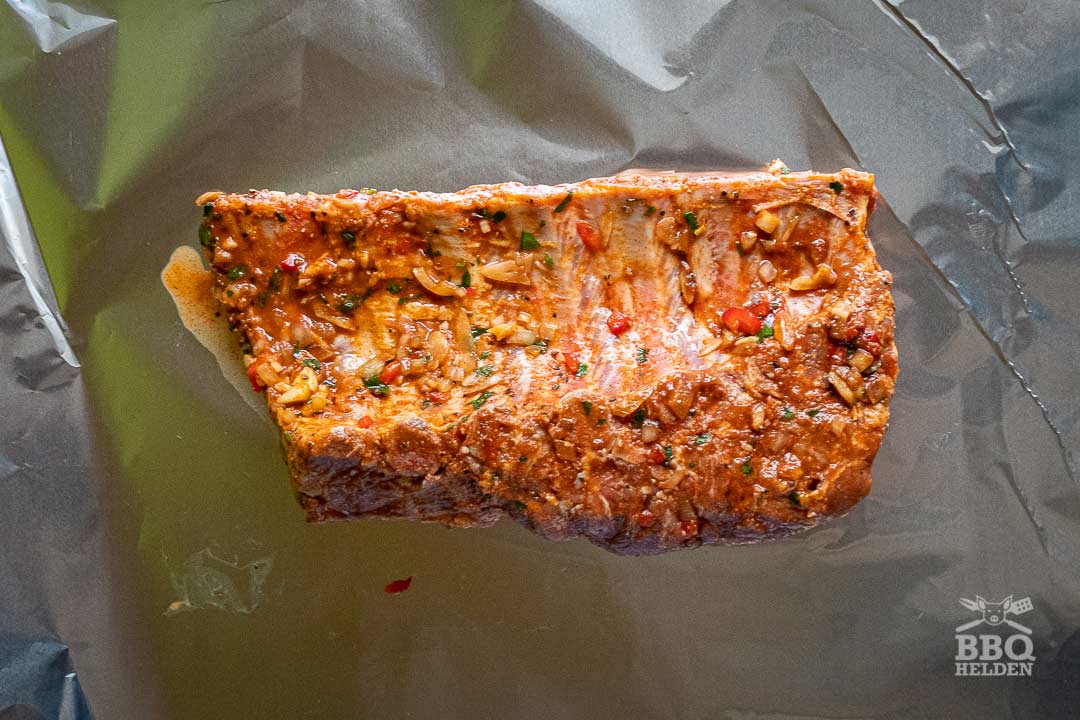 We had the porkribs in the marinade all night. They ended up there for 16 hours. It is not the case that the flavour is absorbed into the meat. Apart from the salt, the rest of the ingredients will only penetrate the meat a few millimetres at most. But because spareribs are not very thick, it still has results.

However, the orange juice does its job. The acid will break down the connective tissue, making the meat more and more tender. We recommend you not leave the ribs in the marinade for more than 24 hours. The meat will eventually become so tender that it has almost nothing to do with pork ribs anymore.

We now indirectly place the marinated ribs wrapped in aluminium foil on the grill and leave them there for two hours. We put one of the two half platesetters in the Kamado to create two zones. 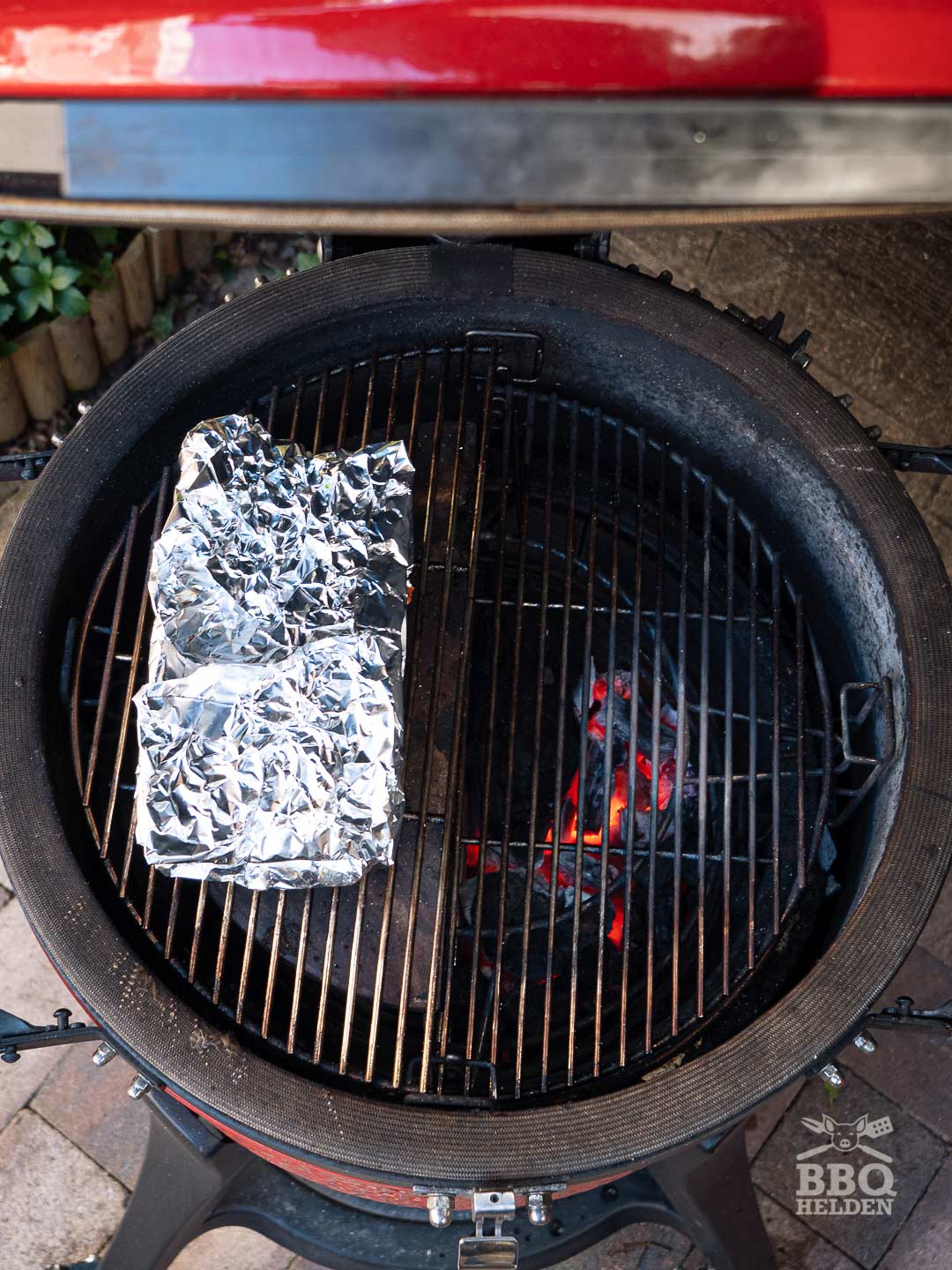 The meat will now be steamed to the point where it almost falls off the bone. We don’t want to go too far because we want the ribs firm enough that we still need to chew.

We poke through the foil and into the meat to check how far the meat is. We do this with a toothpick or the probe of a thermometer. They are good if the probe goes in and out without too much resistance. 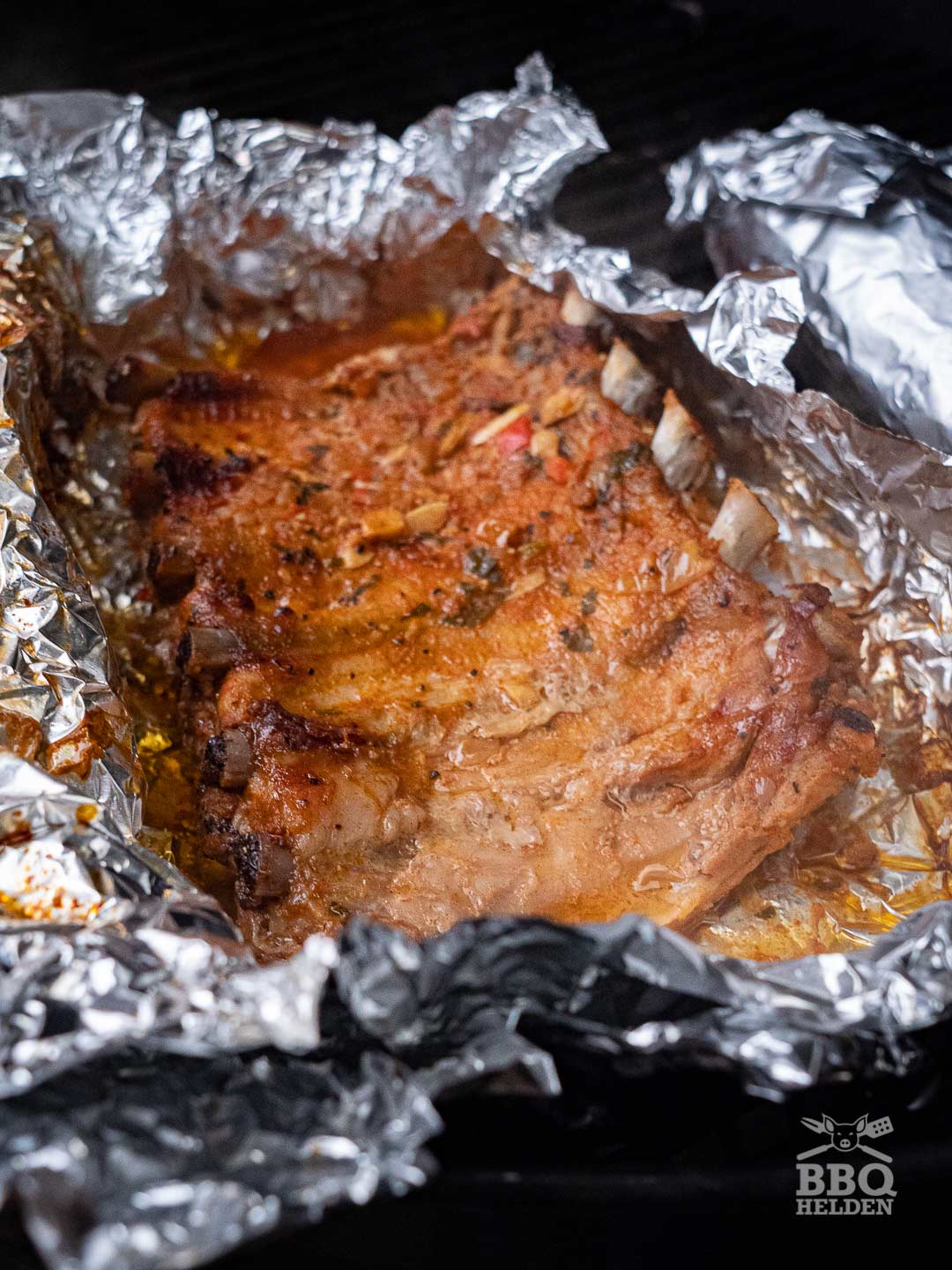 In principle, the spare ribs are now ready. You can see that in the retracted meat, which exposes the ribs. You could leave them wrapped to cool so you can grill them later in the week. We will now grill them directly over the direct side of the grates. 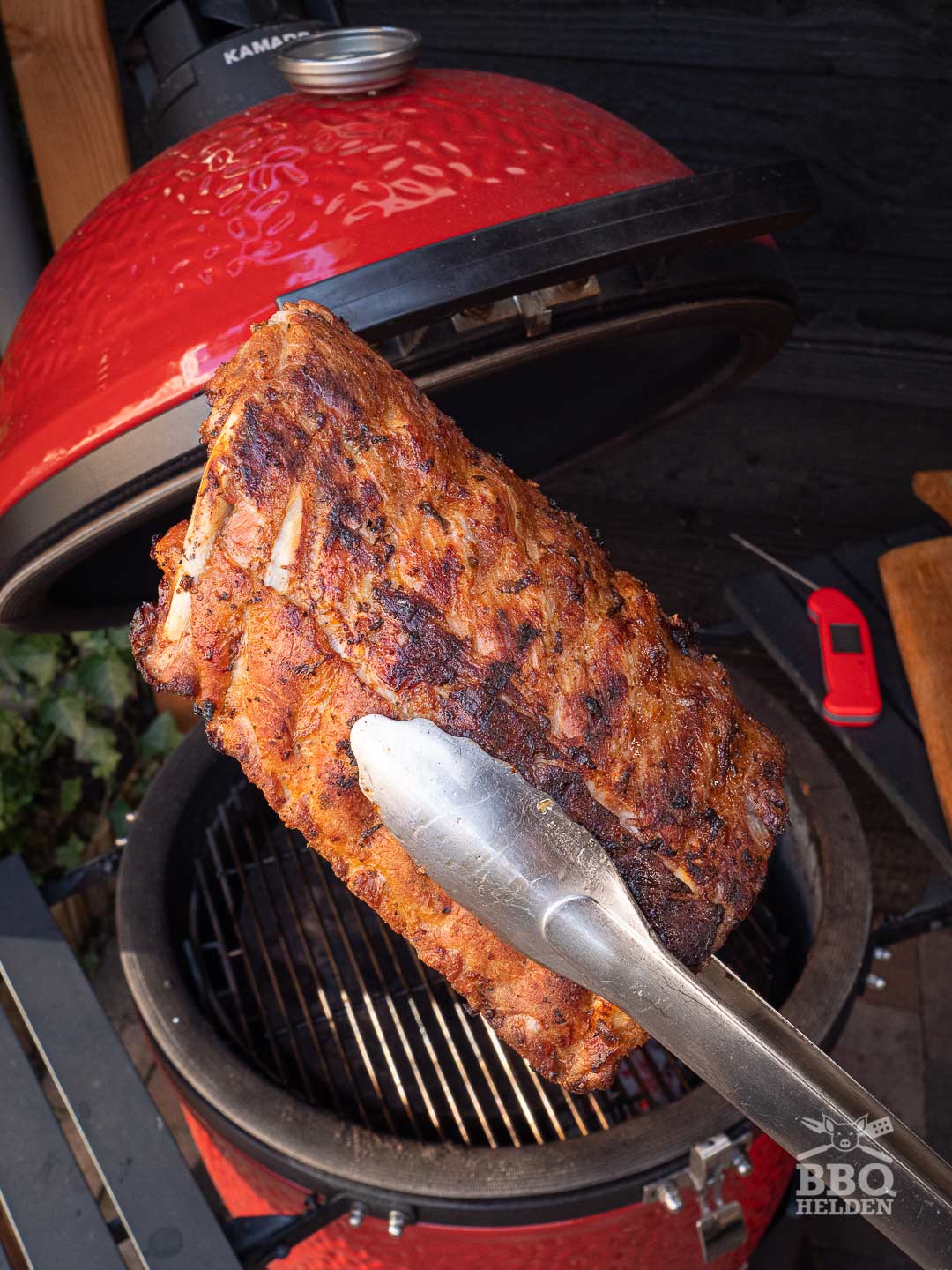 When grilling, keep a close eye on the colour. The target is, of course, a beautiful golden brown. A darker or even black spot here and there is no problem. Just don’t overdo it. 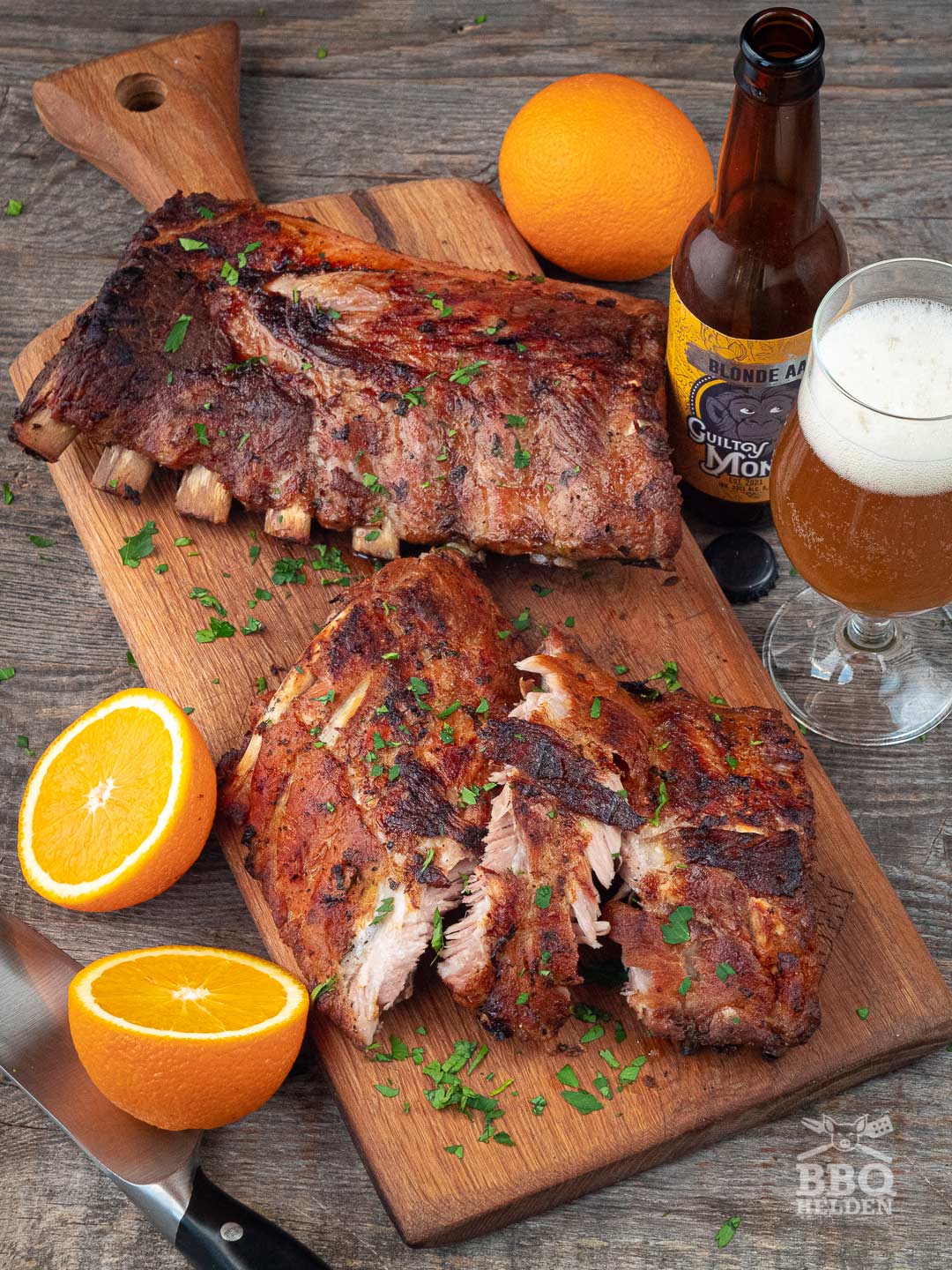