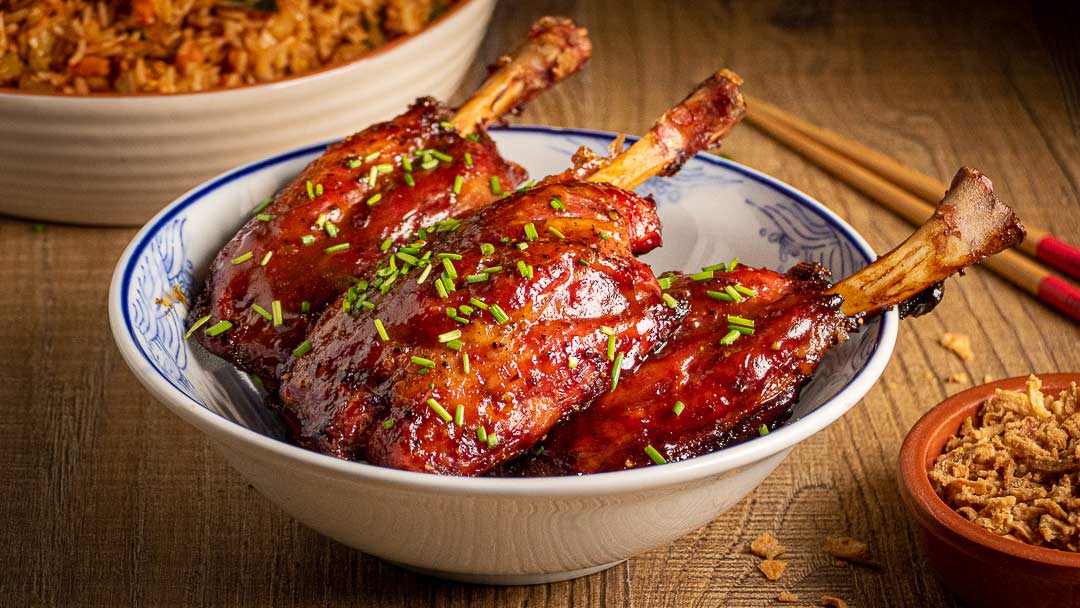 Pig wings are called pig wings because they look a bit like over-sized chicken wings. They are actually trimmed pork shanks. We had a recipe for some tasty spicy Chinese chicken wings and wondered whether this recipe would also work with these pig wings.

In Chinese cuisine, they use a lot of pork, so that would probably be fine. The sauce we made is quite spicy. That’s because of the chilli oil. Because the sauce is applied warm, it is not overly hot anymore. 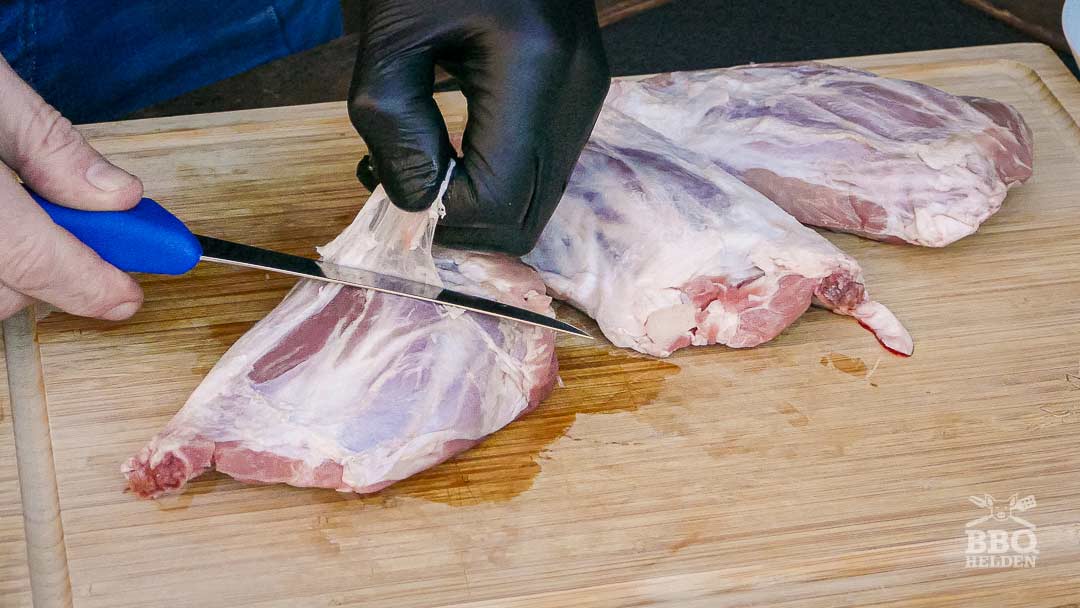 In the Netherlands, we call this cut oerhammetje because it gives you a primal feeling while eating it from the bone. It is tough meat that, with the right preparation, becomes deliciously tender and tasty.

Before they go on the grill, you have to remove the silver skin on the outside. Stick a sharp knife under the silverskin and then cut it with the knife flat. Then turn the blade over, hold the loose skin and cut it off. The silverskin is only on one side of the meat. 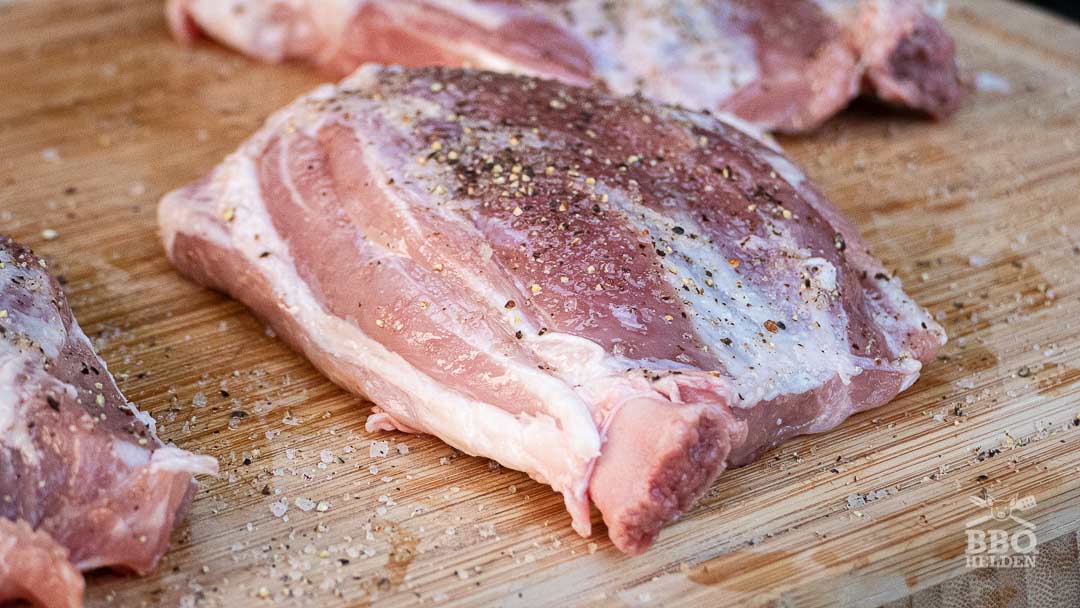 After that, we French the bone a little. During cooking, the meat will retract, exposing the bone. It may well be that the meat remains at the top and that it will tear halfway through. Not bad, but less pretty.
Because we will use a quite spicy sauce, we will only use salt and pepper while smoking. We apply this and let it sit while we prepare the barbecue. 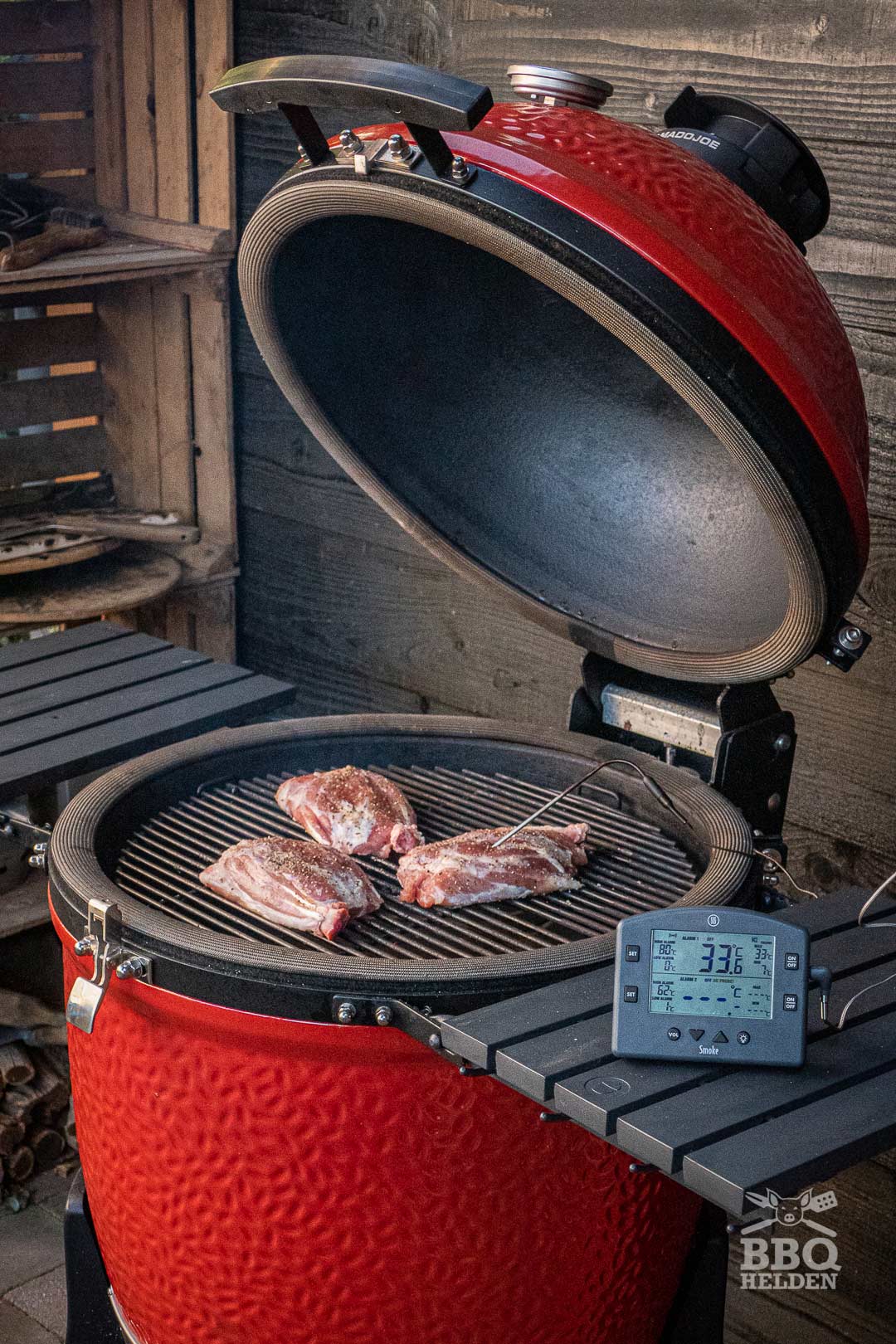 We will smoke the pig wings on our Kamado Joe Classic 3 at about 150°C (300F). Not low and slow, but that is no problem with these pig wings because they contain a fair amount of intramuscular fat.

We are going to prepare them according to the 3-2-1 method. This ensures that we get wonderfully tender meat. 3-2-1 stands for 3 hours of smoking – 2 hours in aluminium foil – 1 hour grilling. The times are variable and depend on the type of meat.

We will first smoke them up to 80°C (175F). We use the Smoke from Thermoworks for that. You don’t have to open your barbecue every time to check how far the meat is. This way, you can do something else, because you are warned through the app on your phone when the temperature has been reached. 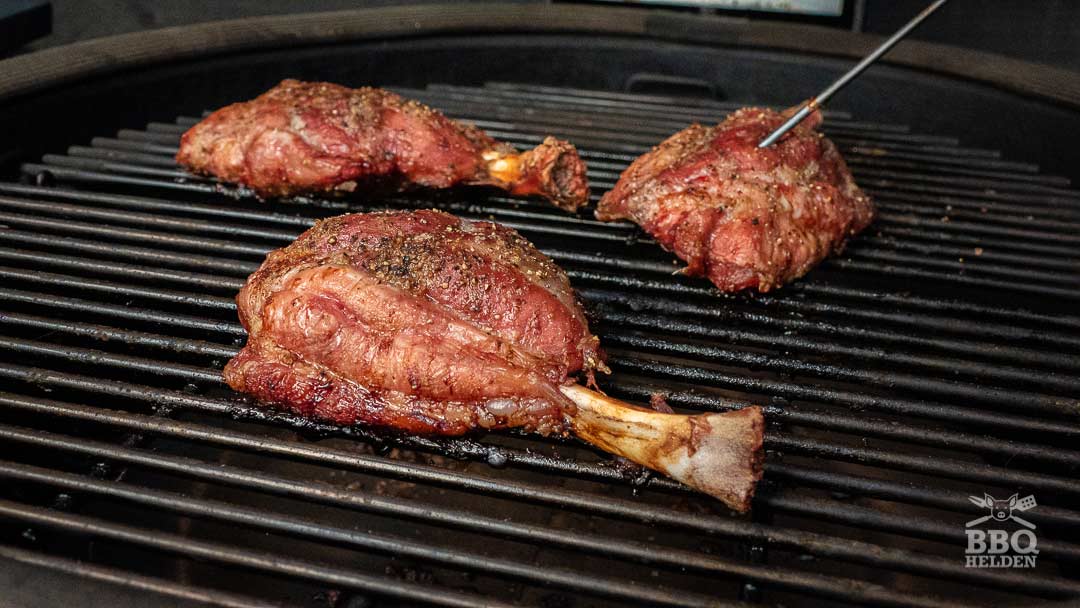 The pig wings are about 80°C (175F) after about 2 hours. Then they have a beautiful colour, and you would like to take a bite. But you still have to wait. You can see that the bone has been exposed. 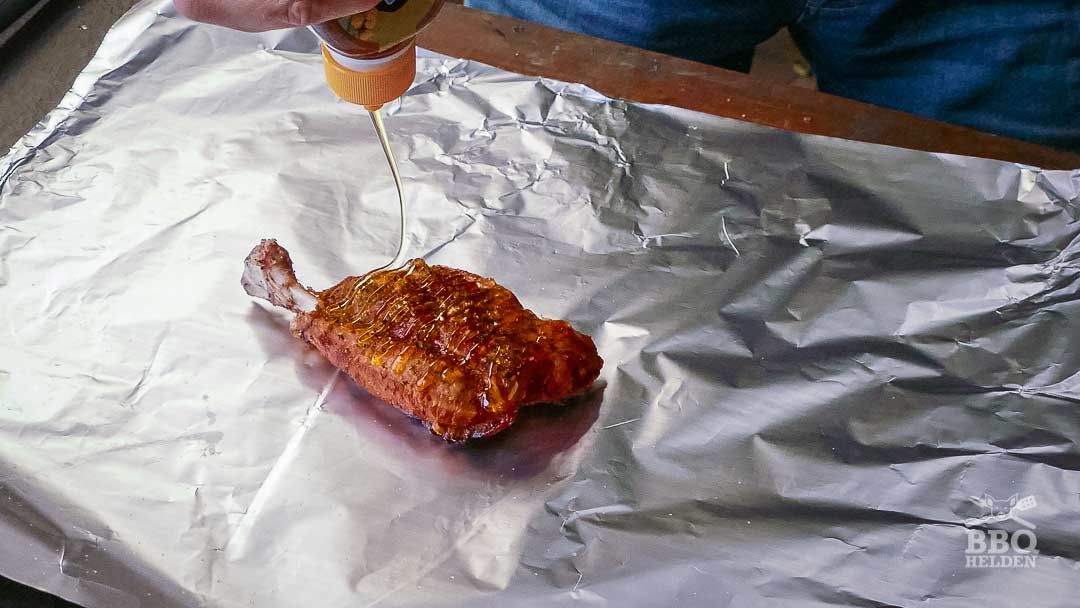 For the second phase, we pack the pig wings individually in aluminium foil. We pour a little honey over it and then wrap them tight. Then they go back on the grill for an hour. In this phase, the meat becomes very tender. 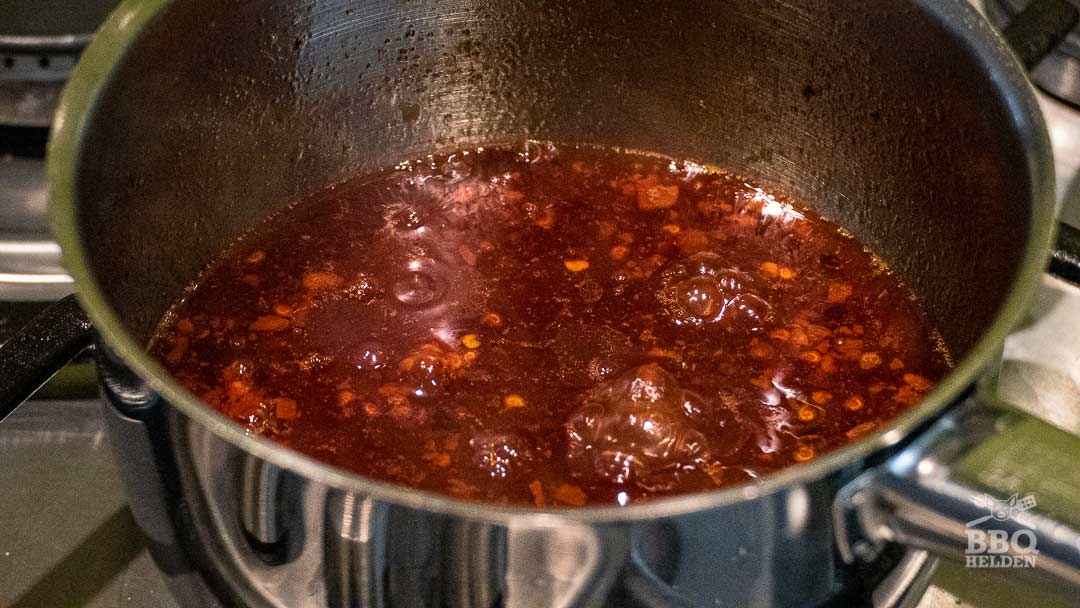 In that hour you can make the sauce. You throw all ingredients in a pan and bring it to a gentle boil. The sauce is too thin as is. You can reduce the sauce, but you can also thicken it with a little cornstarch. 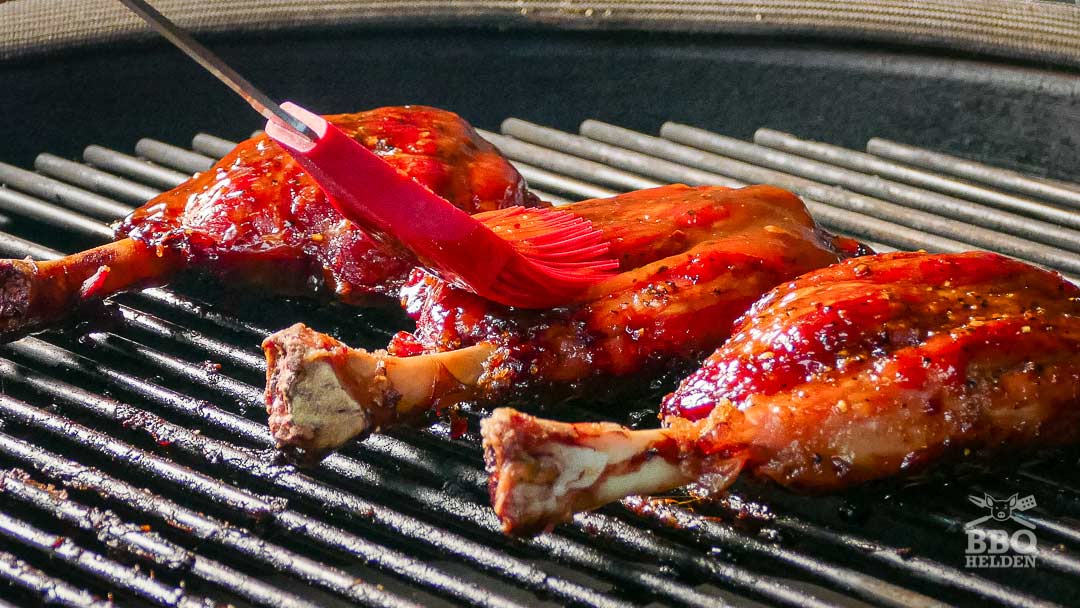 After the hour while wrapped, the pig wings go back on the grill. Then we brush them a few times with the sauce. The pig wings are ready when the sauce becomes warm and sticky. 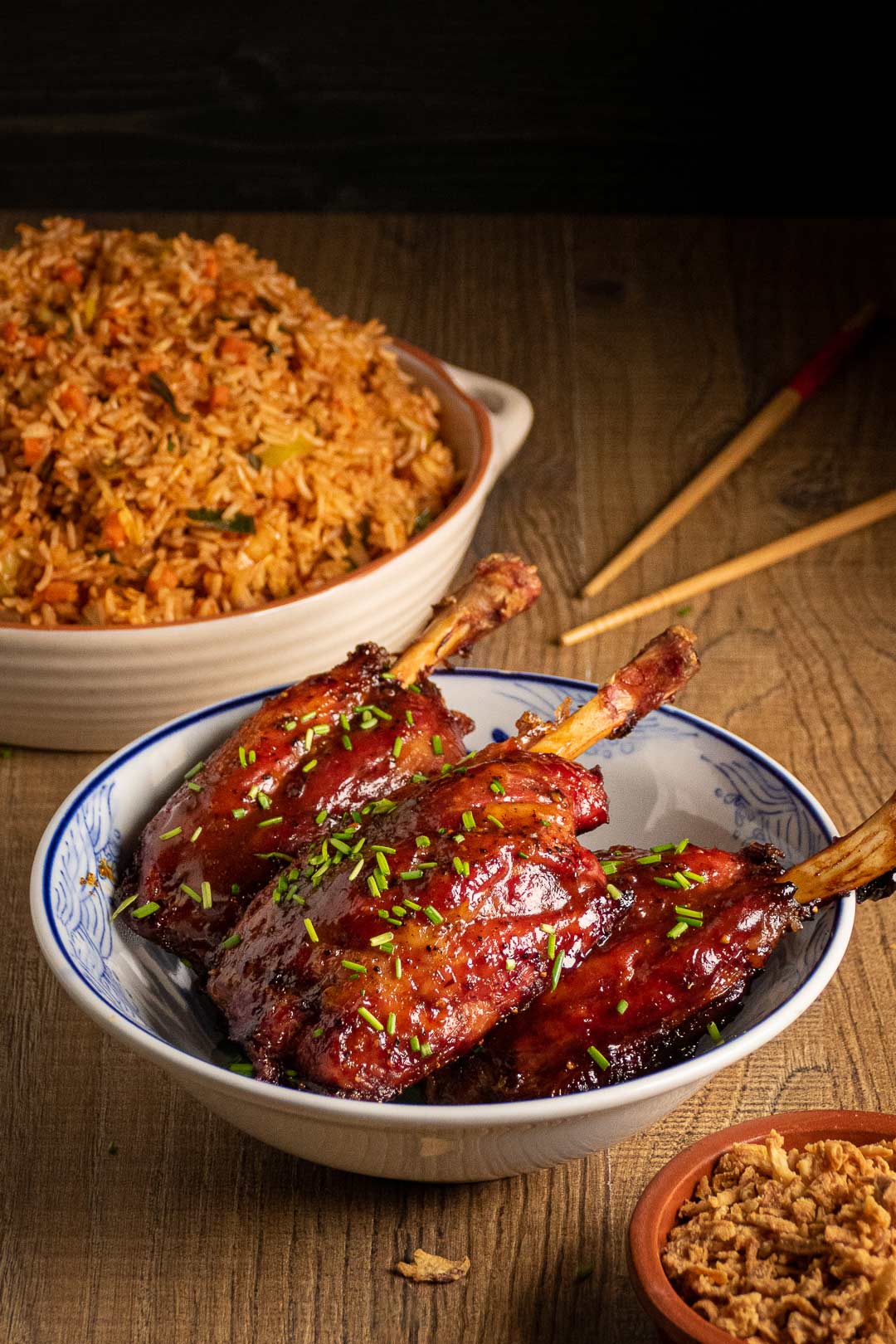 Let them rest a little bit before serving. Give everyone a pig wing to chew on.