Home Recipe Gurnard in dough crust from the barbecue

Gurnard in dough crust from the barbecue

One of my favorite dishes is gurnard in a dough crust. Because it is fun to make, spectacular to serve (it’s a wrapped gift), and very tasteful. The dough crust preserves all flavors and juices in the fish, making them taste even more intense than with other preparations. Also, you don’t have to be afraid that the fish will break and become dry.

For today I have chosen to prepare 2 gurnards on the barbecue. This gurnard or rode poon ass we call them in the Netherlands is caught from the North Sea and is at its best between October and April. In addition to a beautiful color, gurnard has a typical shape with a hard armored head and large fan-shaped pectoral fins. The firm fish meat is deep in taste and appears to be most similar to shrimp. 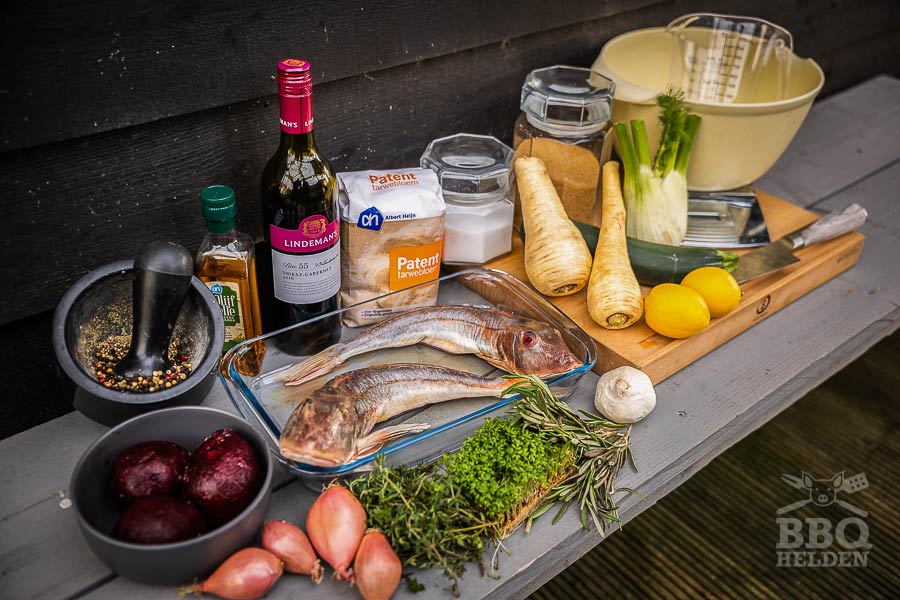 I try to get my products directly from the source as much as possible. For fish, I always visit a fishmonger in the port of Stellendam. Not directly in the neighborhood, but if I happen to pass by, I immediately take home a supply.

The fish is caught by the so-called home fleet in the North Sea or collected from fishing companies in the region that fish on the Grevelingen, Oosterschelde, or the Wadden Sea. Among other things, with a red mullet, you can leave the head when cleaning the fish. I think this looks nicer on the table.

The preparation can be divided into three parts: the fish in a dough crust, the red wine sauce, and grilled vegetables. The sauce goes well with the fish and vegetables.

Grilled vegetables are an ideal side dish, as they can be adjusted to the season every time. In the summer there is a choice of tomatoes, peppers, aubergines and in the fall there are plenty of carrots, parsnip, beetroot, pumpkin and so on. 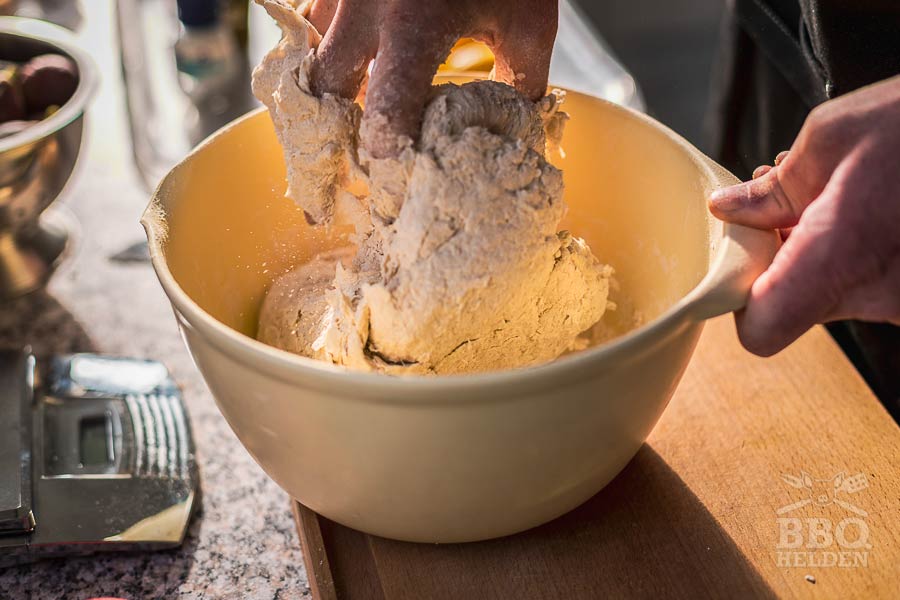 For the fish, we can make the dough well in advance. For this, the salt can be added to the flour, and we gradually mix the water there. Take the time to knead the dough. Although the dough will not be eaten in the dish, it is purely used for optimal cooking, we do want to make a great dough.

The dough is perfect if it forms a lovely smooth whole and has the stickiness of a post-IT. After this, it can rest for a while. In the meantime, we can make a small saucepan of red wine sauce with shallots, fresh thyme and rosemary, real butter, and finely sliced ​​garlic. To allow it to thicken to the correct consistency, you let it reduce for a while.

While the red wine sauce is simmering on the fire, we prepare the red beans to pack. At the fishmongers, the intestines and the like have already been removed. To ensure the fish is clean, we rinse the fish with cold water and then pat dry with kitchen paper. Each fish is filled with three slices of lemon, a sprig of thyme and rosemary. 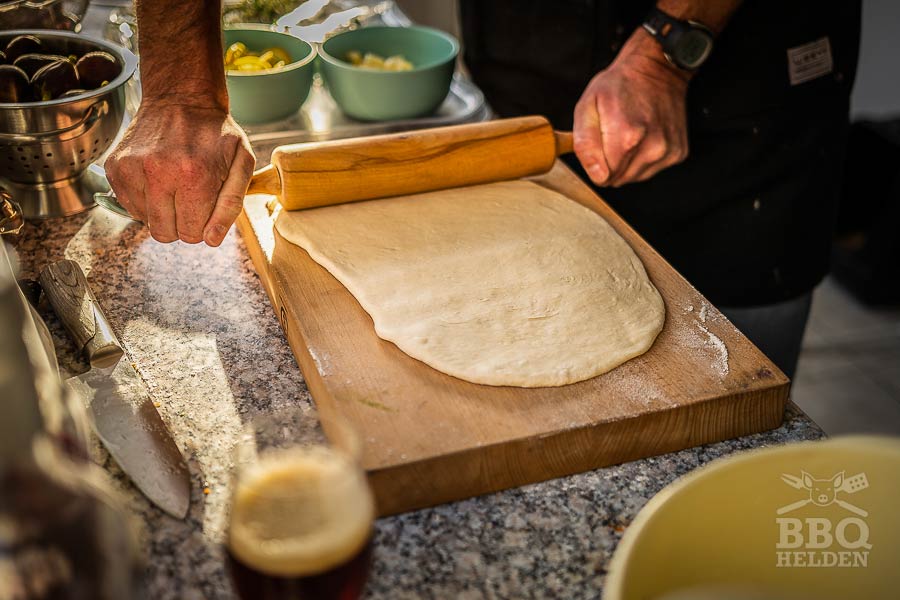 We put the fish aside to roll out the dough. We split the dough ball into two equal parts. With the rolling pin, we shape the dough to approximately 20 x 40 cm (8 to 16 inches). At least enough space to be able to pack the fish with it. 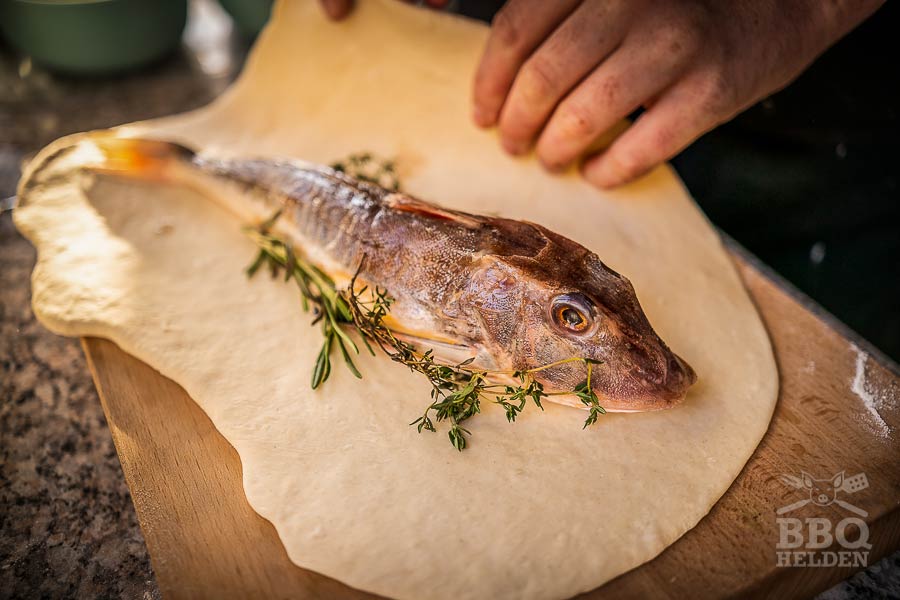 We place the fish neatly in the middle of the dough, and we fold the two long sides inwards. We close the package at the head and tail. Press the edges well, and for extra sealing and a colorful effect, we brush the dough with egg yolk.

With both dough packages on, for example, a serving board, we can take it to the bbq. We had already fired this up to around 200°C (390F) with indirect heat. Above the cooler part (far from the briquettes), we place the pizza stone. The stone prevents the dough from sinking into the grill rack, and we can remove the fish without damaged dough crust afterward.

If both packages are on the pizza stone, we stick in the digital thermometer. Consider where and how you apply it. The thermometer must be put in the fish meat. Avoid contact with the bones, head, or abdominal cavity, as it may eventually transmit the wrong temperature, causing the fish not to cook properly.

The lid can be put on the bbq, and you can make the red wine sauce. When the sauce has been reduced to 1/4, we will sift out the shallots and spices. The sauce goes back into the pan and on the fire. The butter may be added in cubes while stirring so that the sauce binds. Add salt and pepper to taste. If the sauce appears a little too sharp when eating, then a teaspoon of cane sugar can be added. 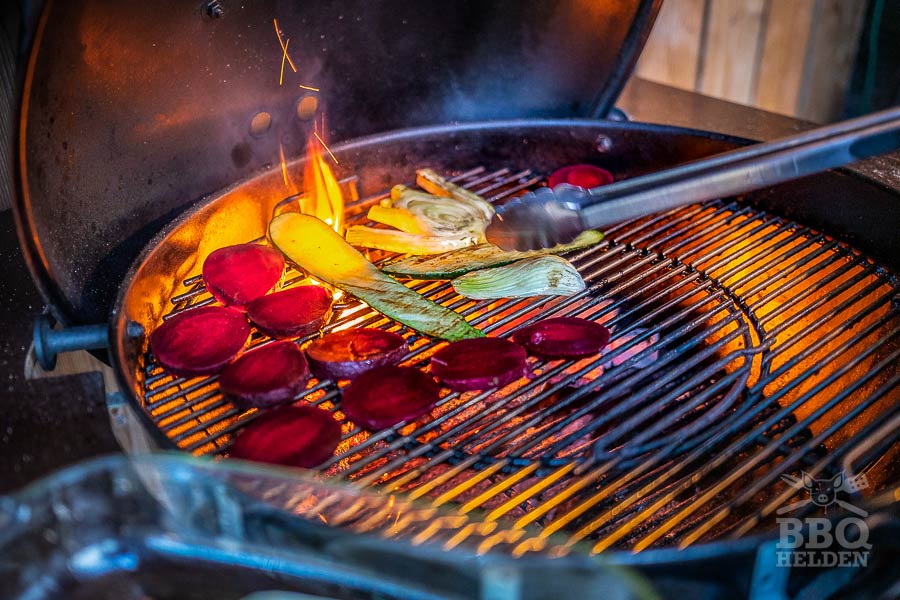 Now that the red wine sauce is ready, we can cut the zucchini, beetroot, fennel, and parsnip into slices half a centimeter (0,25inch) thick. Then brush both sides of the vegetables with olive oil and add a little salt to taste.

Once the fish has reached 65°C (150F), we can remove the fish from the barbecue and start grilling the vegetables. Because the fish is packed in the dough crust, it will remain warm enough before serving. With an open barbecue, the briquettes will burn extra well, giving grilling a better effect. The vegetables can be directly above the fire. Be ready with the tongs to turn the vegetables on time. A grill line or diamond is excellent and tasty, but we don’t want it blackened. 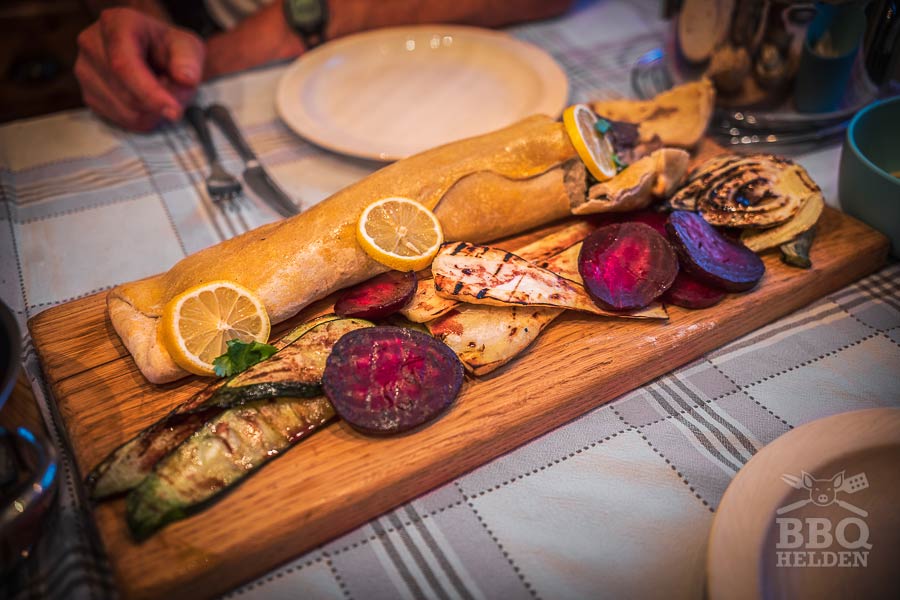 Once the vegetables are ready, we can serve the food on a plate or serving board. We make the fish visible by breaking open the crust of the dough. Place the vegetables along with the fish and the sauce over it. A few sprigs of rosemary and thyme finish it off.