Quiche Lorraine with bacon and onion from the grill 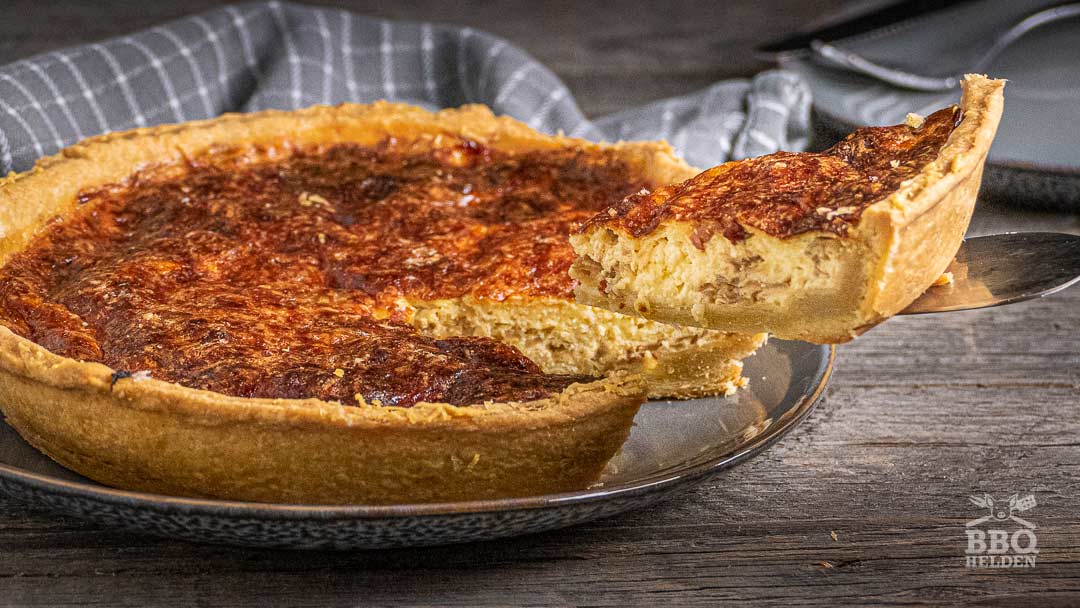 Good quiche Lorainne is fantastic. And we don’t mean those delicate tarts with asparagus and way too many vegetables. No, this quiche is for the tough women and men who have a grill in the backyard.

Caramelized onion and bacon go into this quiche. And cheese of course. To ensure that you can eat more than piece, we use Greek yoghurt. This makes the filling less heavy. 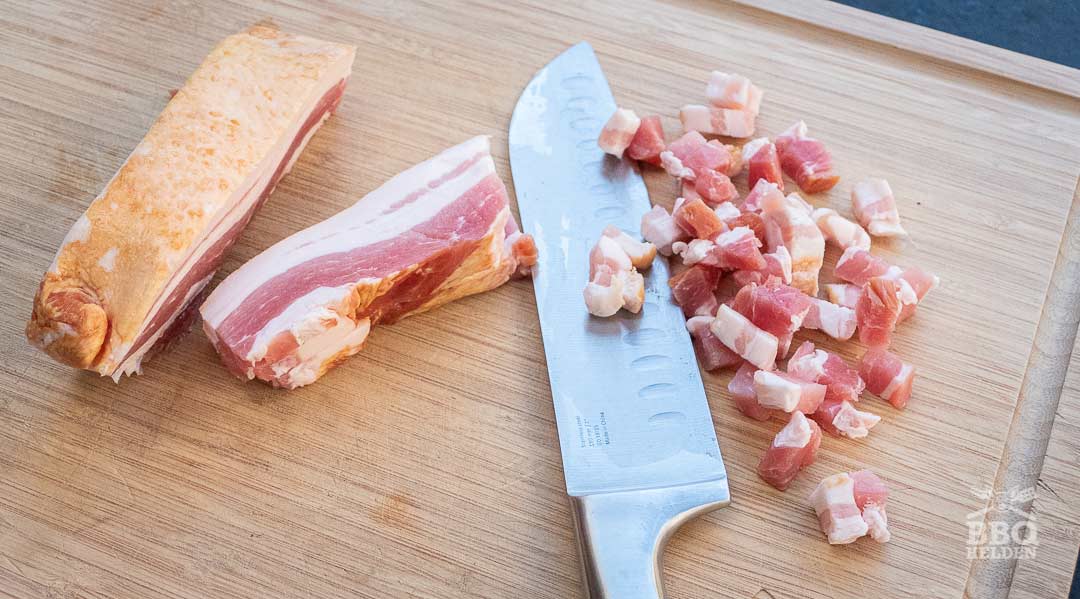 We always have a piece of smoked pork belly in the fridge or freezer. We Dutch use it in almost every winter meal so I make it in advance. And everything you have made yourself is better anyway. Just try. 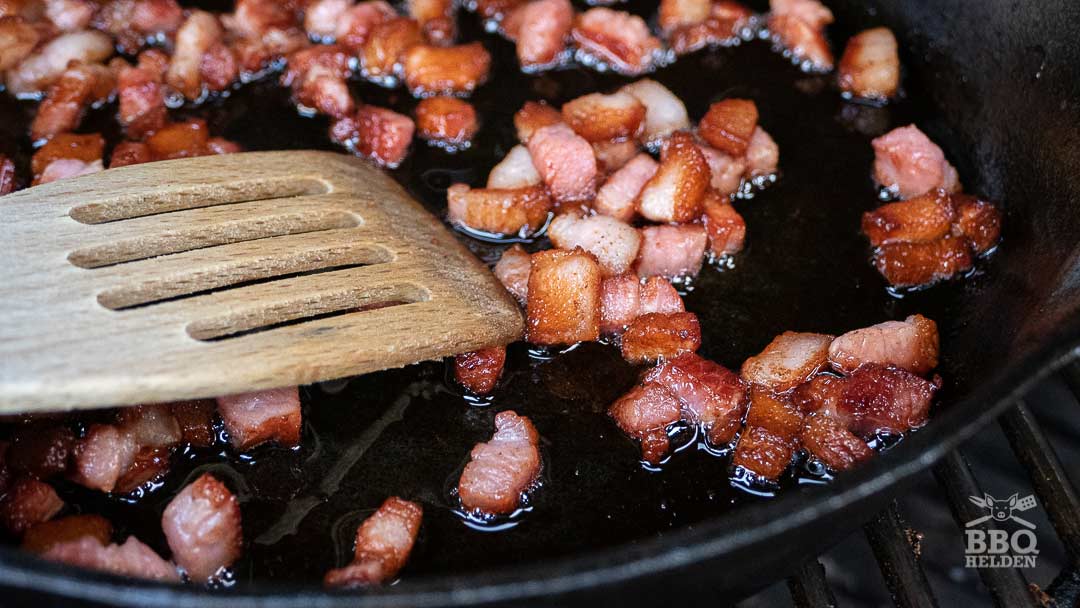 Fry the pork belly until just crispy. When they are coked, pour some of the melted bacon fat into the quiche mould. You leave the rest in the pan. 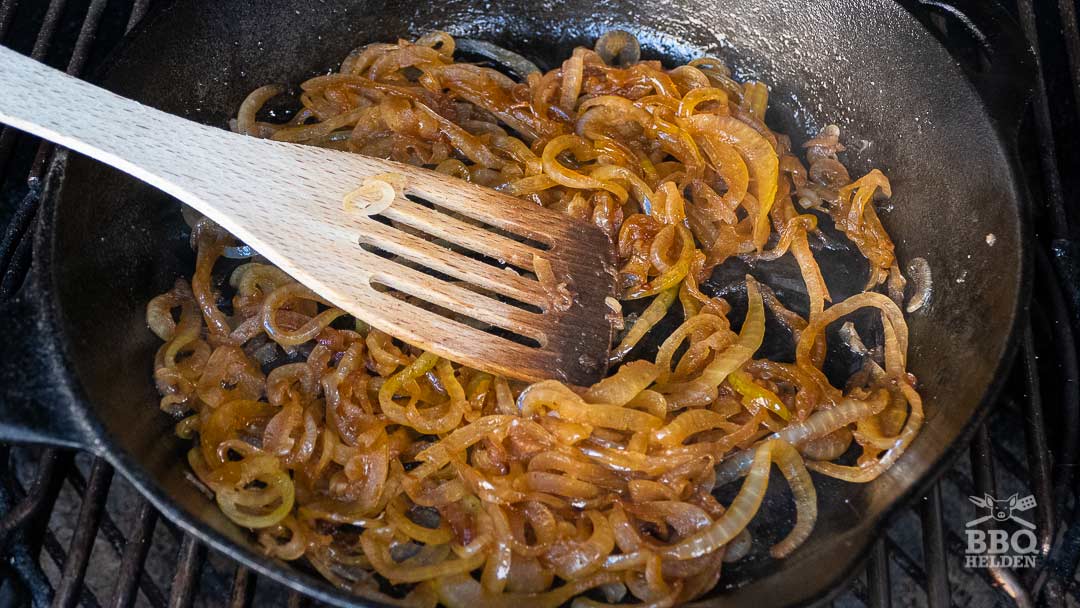 We caramelize the onion in this bacon over low heat. The slower it goes, the better. If the contents of the pan dry out, add a little bit of water. Continue until the onions are brown and soft. 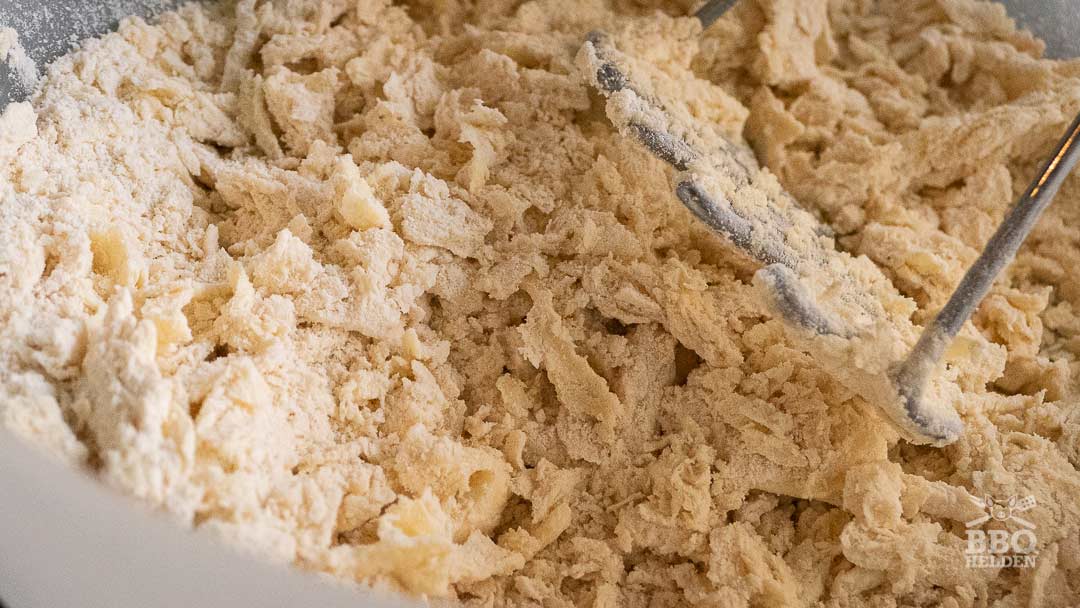 Then we will make the dough for the bottom of the quiche. The trick is to use small pieces of cold butter and cold water to get a flaky crust. Because the butter is cold, it does not mix well with the flour, and you get flakes of butter in the dough. This gives the bottom a puff pastry-like structure during baking. We combine the flour and butter with a puree masher. This also prevents the butter from softening by the warmth of your hands.

The cold water then ensures that the butter does not become too soft while kneading. If the dough becomes too dry, add a little bit of water. 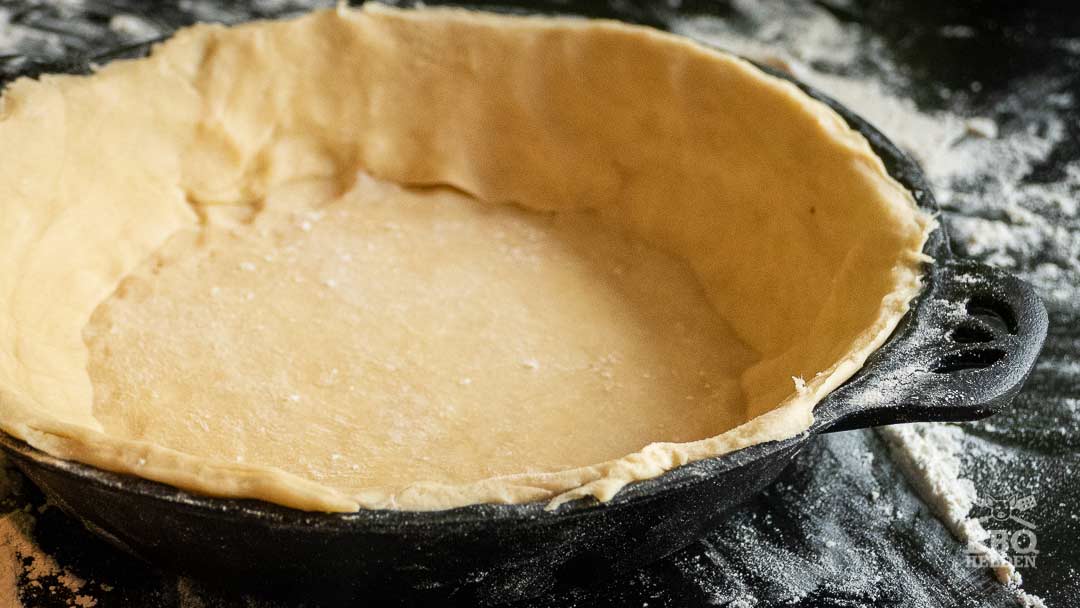 We use a special cast iron cake skillet as the mould. Because the edges are slanted, you can quickly get the quiche out of the skillet after baking. We rubbed the skillet on the inside with the bacon fat. This way the dough will turn a nice golden brown, and it will not stick.

Try to get the dough about 5 to 6 mm thick. This way the quiche looks better at the end. We did not quite succeed as you can see. 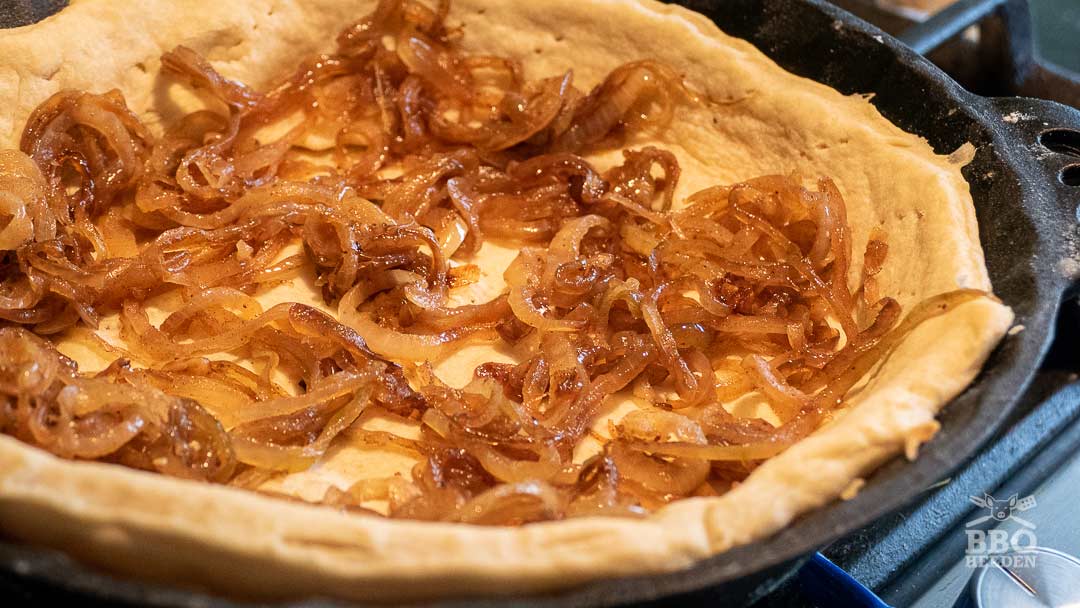 Let the bottom bake for 15 minutes. The dough will then become a little firmer so that the moisture from the onions and the rest of the filling will not soak into the dough. Then we put the caramelized onion on the bottom. 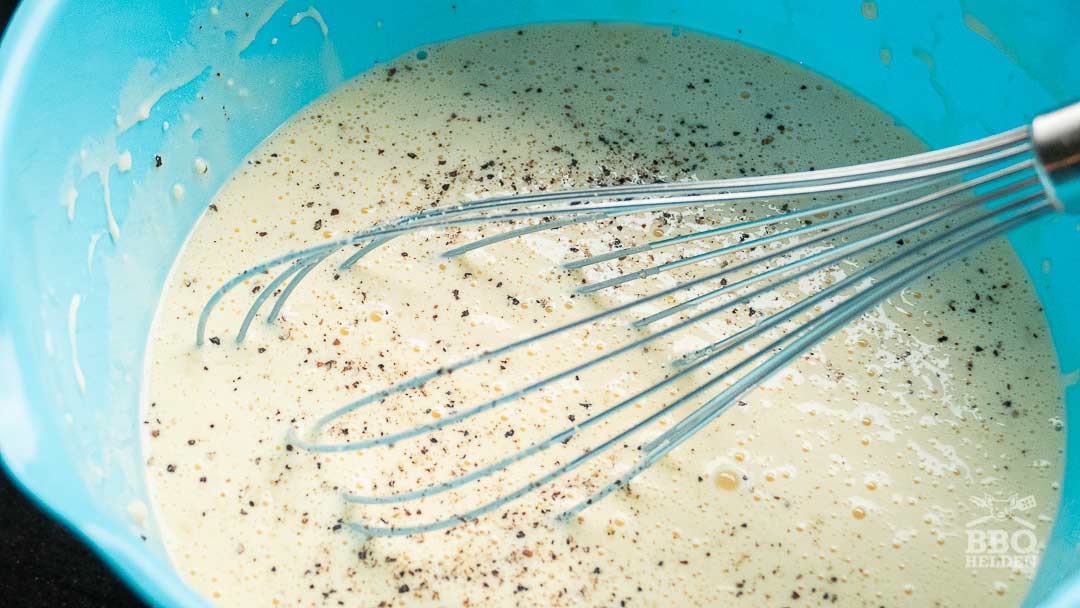 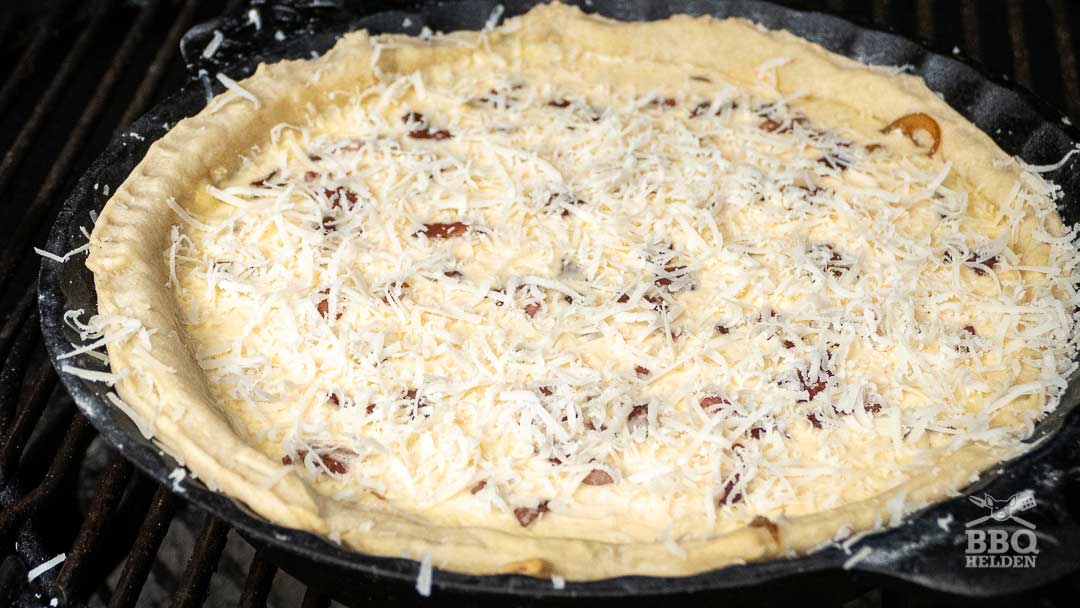 Fill the quiche up to half a centimetre below the rim. Then you sprinkle the fried bacon on top. These sink into the batter, so it is essential to put the skillet in the barbecue immediately after adding the bacon. Once on the barbecue, sprinkle some Parmesan cheese over the quiche. 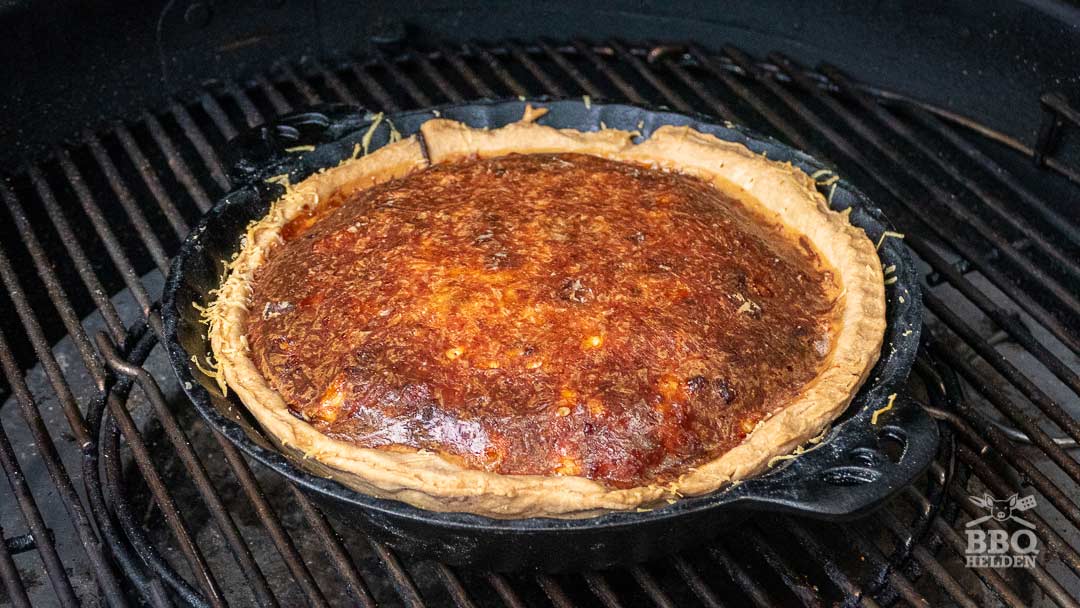 After 40 minutes of baking, you will see that the filling has blown up. That’s why we stayed up to half a centimetre below the edge. If you hadn’t, everything would have flooded over, and you had a mess in the grill. During the cooling down, everything collapses again. 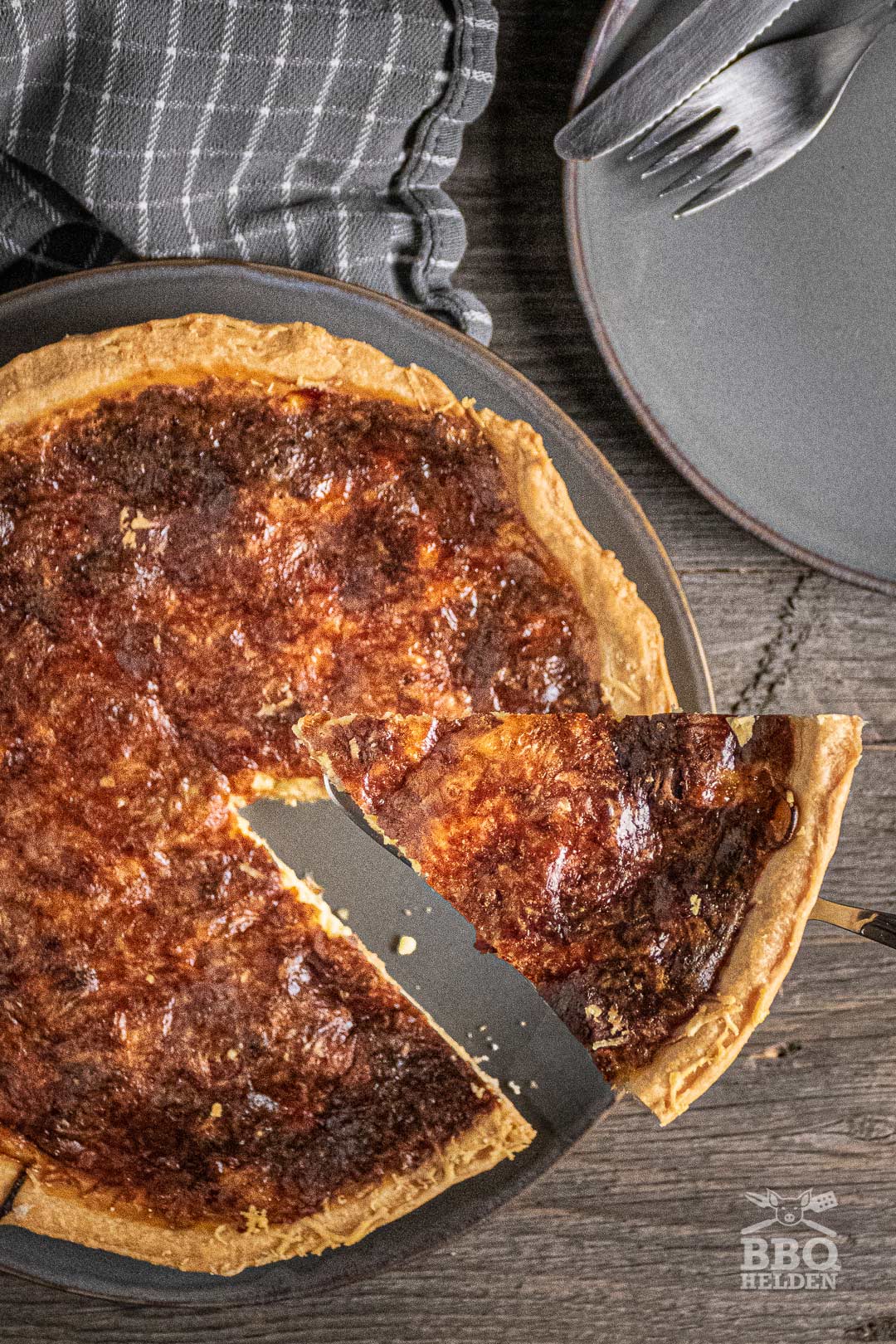 Let the quiche cool completely before cutting it. Otherwise, the filling is too soft and will still flow too much. This quiche is perfect for brunch, lunch or as a side dish with dinner.