Pizza quiche from the skillet 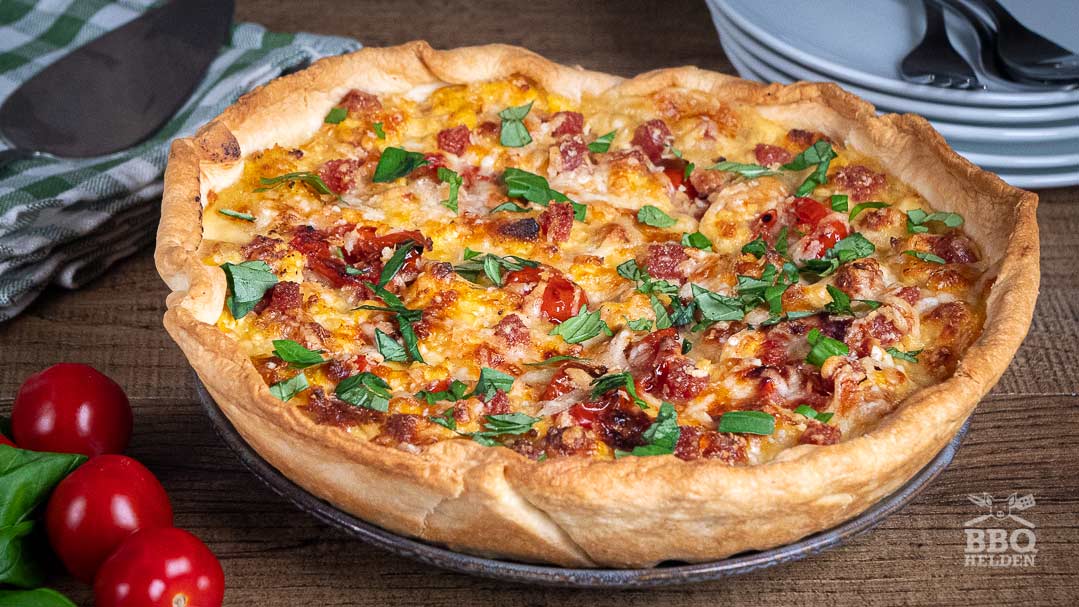 It’s entertaining to convert existing recipes into a pizza. You may already know the pizza burger or the pizza muffin. We made a pizza quiche. A quiche from the skillet with lots of cheese, tomato and salami. This is a basic recipe that you can use in many ways. 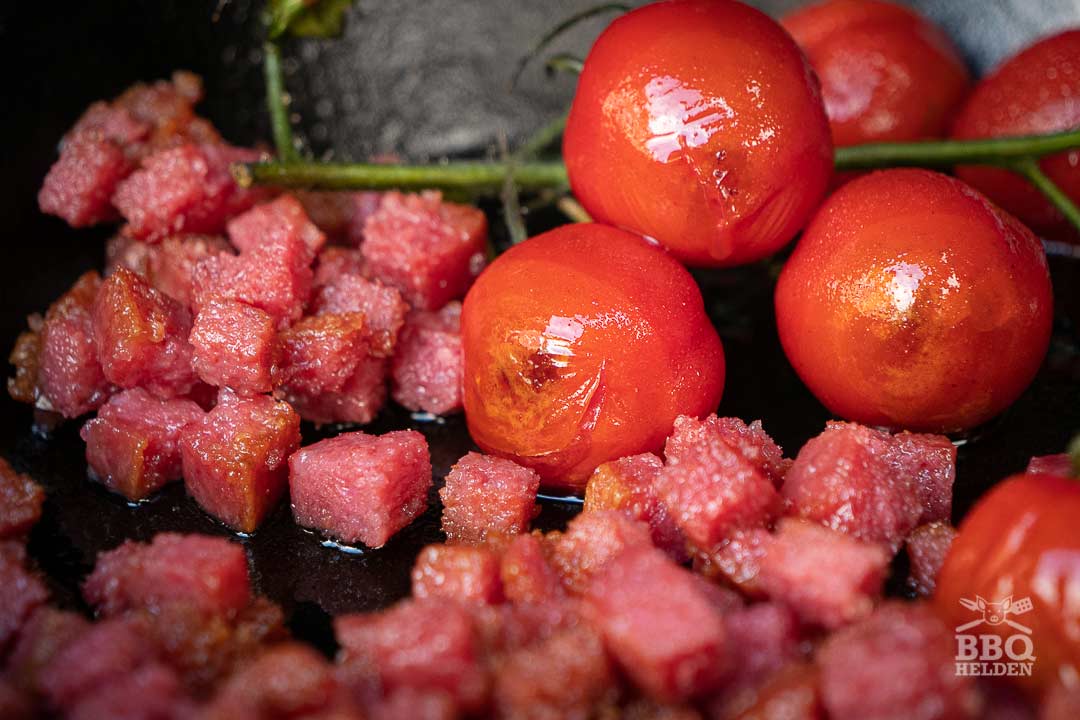 We throw the tomatoes into the skillet first until they get a bit darker, and then we add the cubes of salami. We bake everything until the tomatoes burst and the salami cubes have become a bit drier. 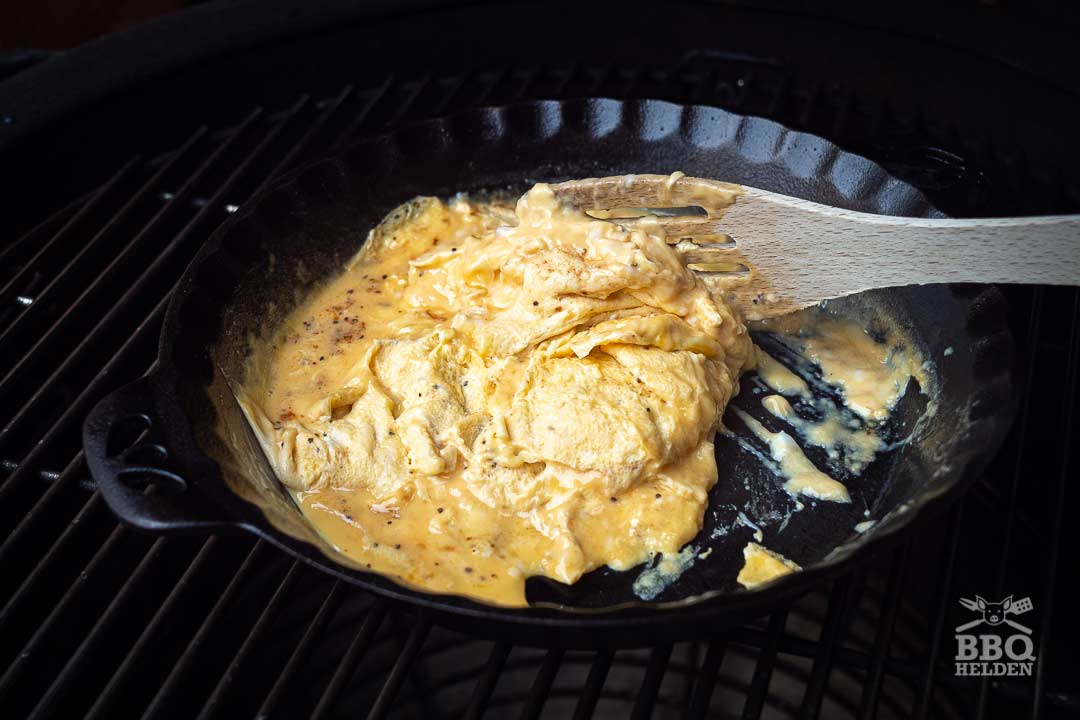 In the fat from the salami, we make scrambled eggs. The trick to a good scrambled egg is mixing the egg with milk. Let it sit over low heat until you can flip it in large pieces. Then you let it solidify again until you can do it again. You stop when you no longer see liquid egg wash, but you don’t let it cook dry. Good scrambled eggs are fluffy and a bit moist. Keep in mind that the cast iron skillet is still hot for a while so that the egg continues to bake. 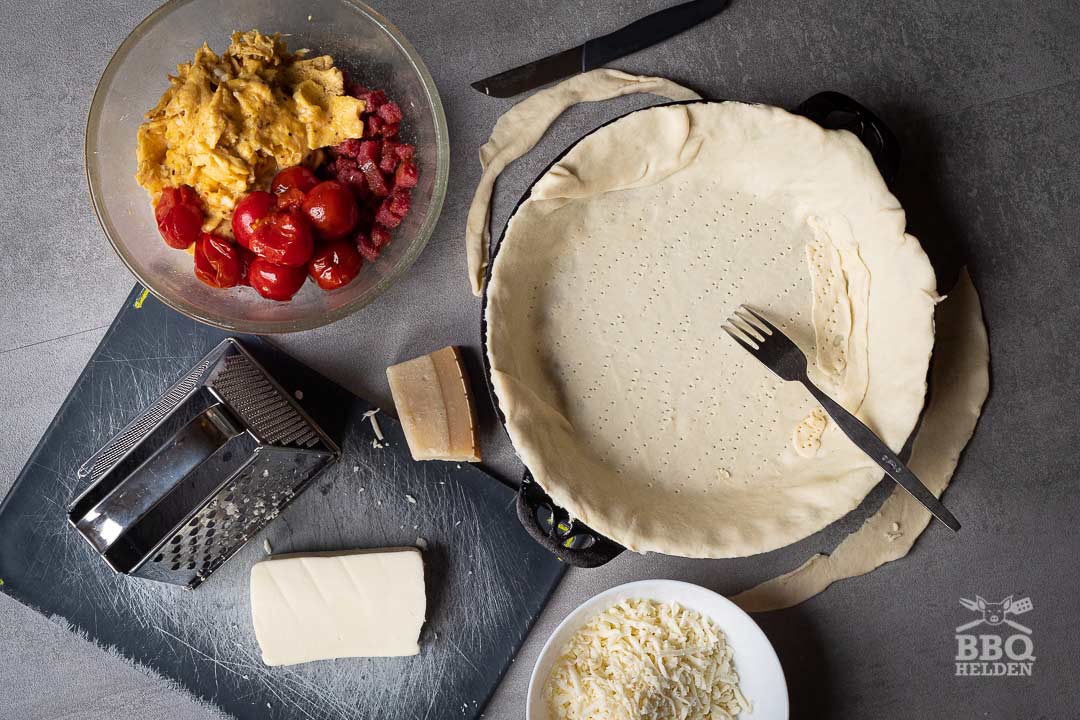 When the skillet has cooled enough to handle, you can wipe the last bit of egg out of the pan with a cloth. That only works if your pan is well coated and nice and smooth. If this is not the case, here are some handy tips on how to make your skillet non-stick.

We use ready-made quiche dough for this quiche that you buy as a roll. We had made our own quiche dough before, which was doable, but it took much longer to make. Try to place the dough in the skillet without air bubbles. If you accidentally press a hole in the dough, tape it up with the leftovers.

In the list of ingredients, we mention dry mozzarella. That is different mozzarella than the bags at the supermarket. But it is certainly not pre-grated mozzarella because that is certainly dry. It is the mozzarella you buy as a block before it is grated. Your cheesemonger can help you with this. 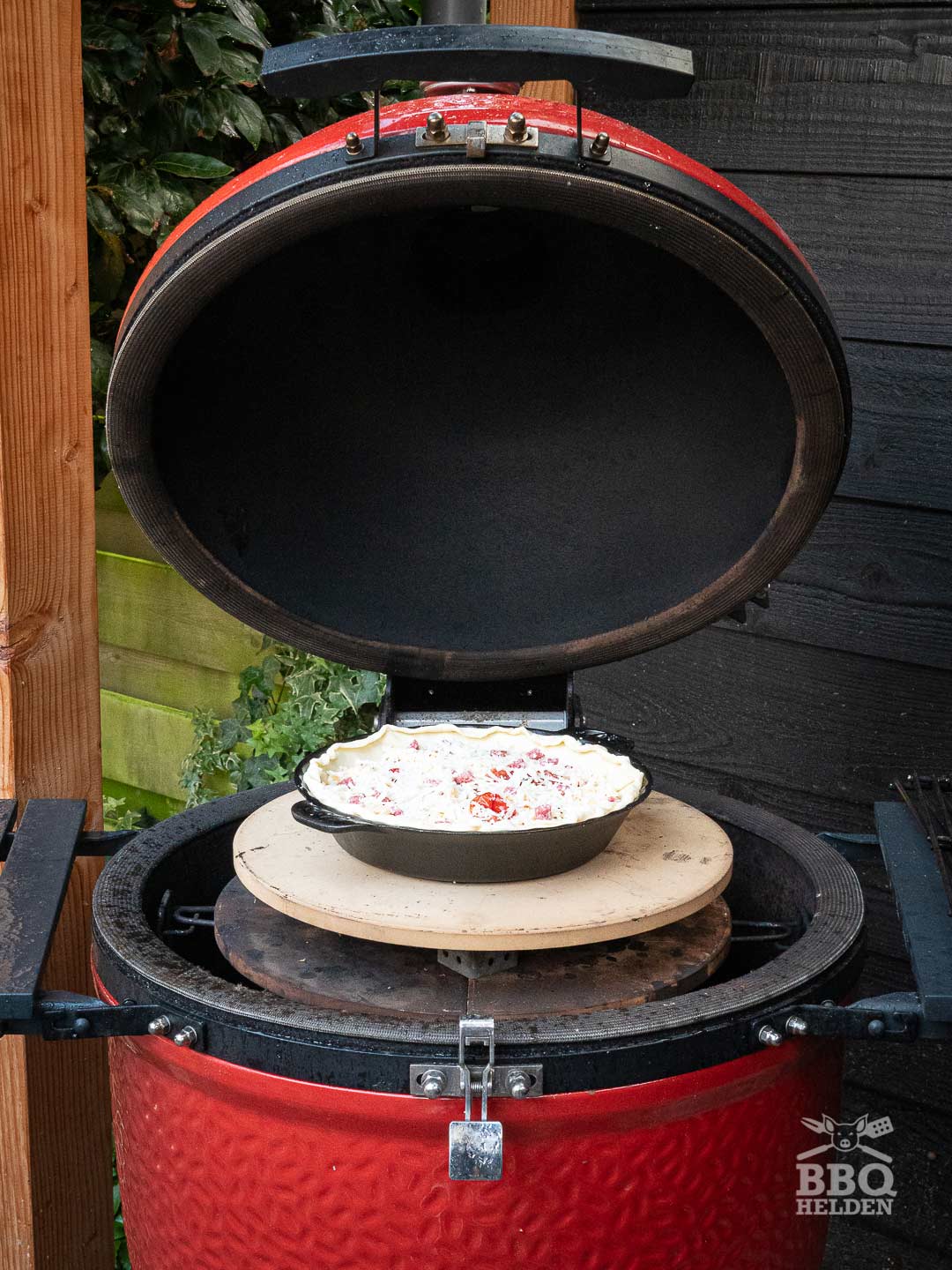 This is the setup in our kamado that we use to bake pies, pizzas, and a quiche. We place the accessory rack in the highest position in the divide and conquer system, and on top of that, our plate setter with three corner pieces. Then we put a pizza stone on it. This way, we have an indirect preparation without worrying that the bottom of the quiche will get too hot and burn.

Because the quiche is now placed high in the lid, the reflected heat from the lid will ensure that the quiche is well cooked from above. 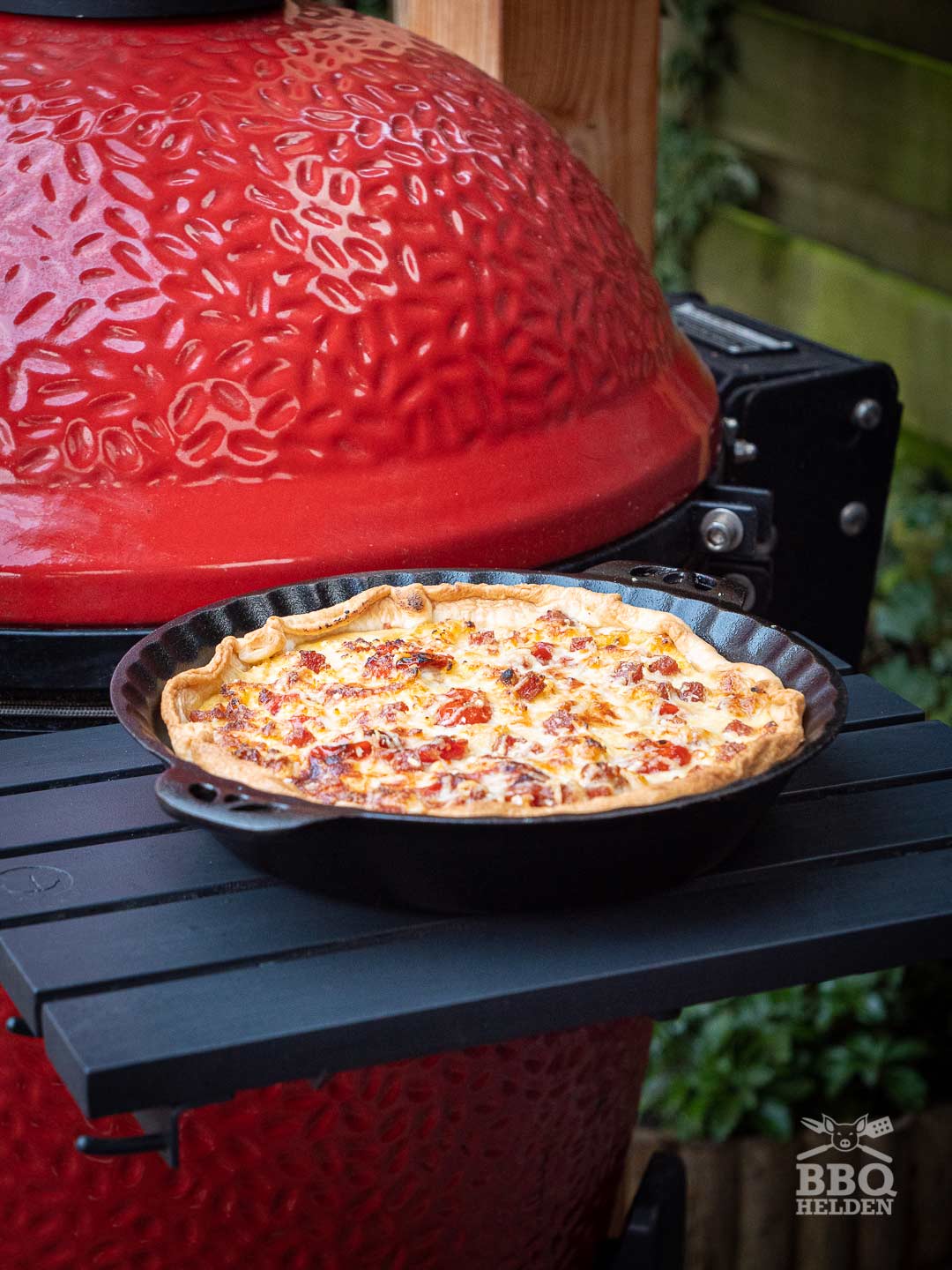 After half an hour, the quiche is ready, and you can see that the Parmesan cheese has also become nicely crispy brown. Before you try to remove the quiche from the skillet, you will have to let it cool down completely. The content of cheese and egg is still soft, and the quiche would break apart if there is no longer any support from the skillet. 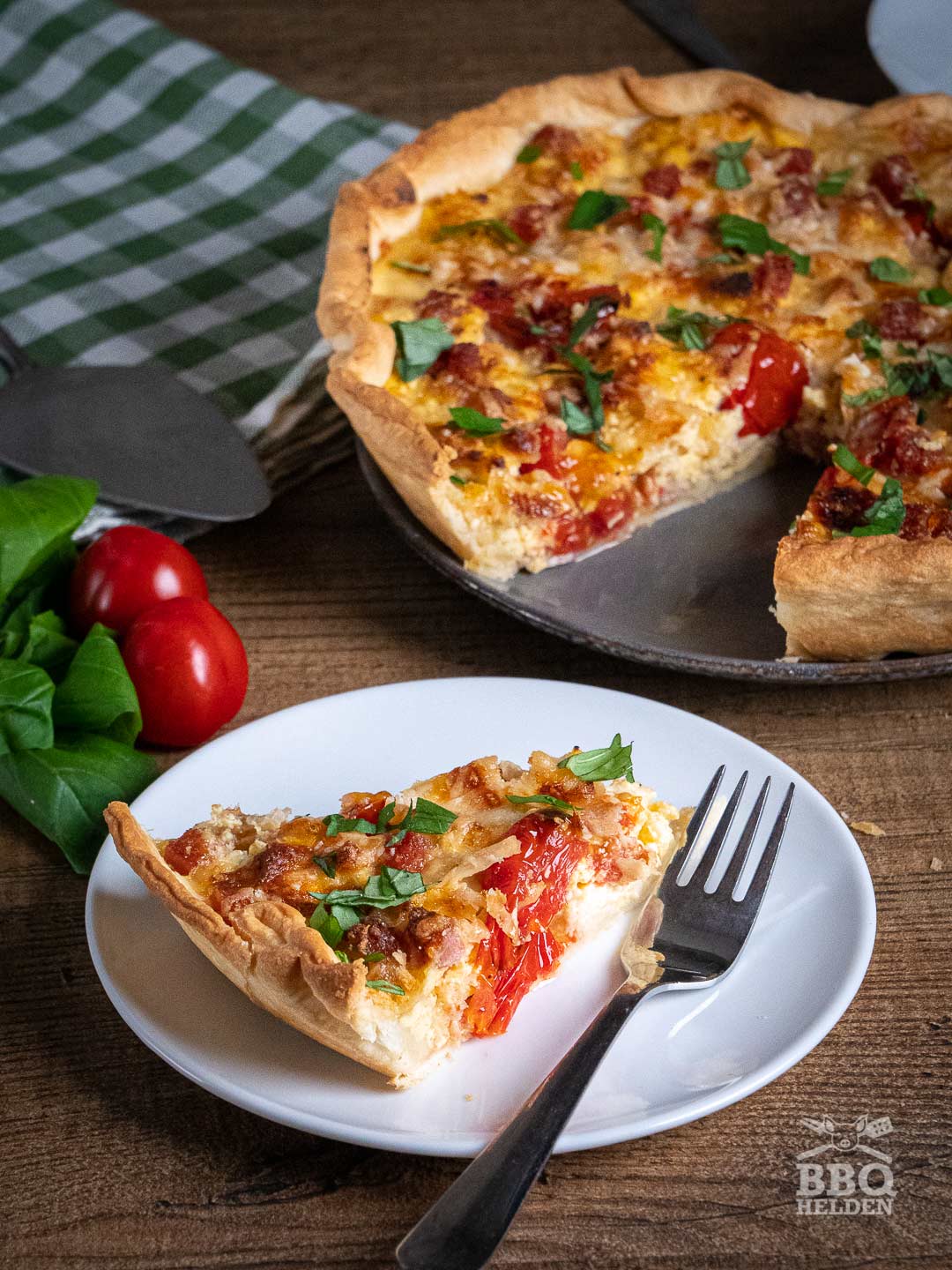 This is our pizza quiche. Let us know if you will make it in the comments below. Or better! Take a photo and post it on Instagram. Tag @bbq.heroes so we can see what you made.