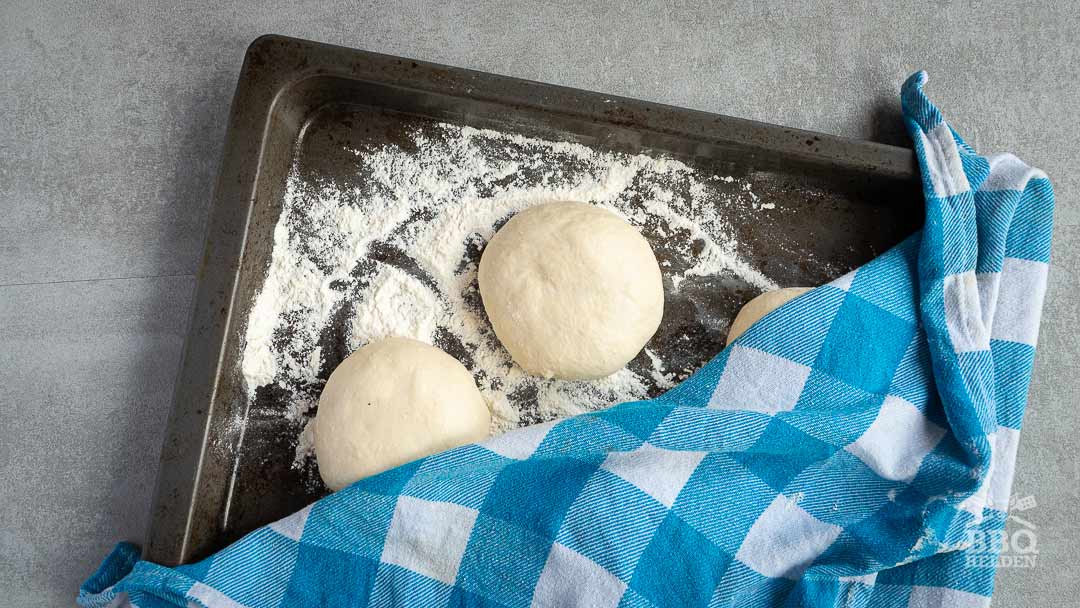 We are often asked which pizza dough we use. And that differs. It has to do with what kind of pizza we want to make and at what temperature. This pizza dough is for an American/Roman pizza that we will make on the kamado at 300°C (572F). And the temperature is especially important.

If we were to maintain a temperature of, for example, 400°C (752F), we would be much more likely to make a Neapolitan pizza with a larger percentage of water in the dough. And that creates an entirely different pizza.

The pizza we will make now has a dry, crispy bottom and an almost even brown crust. This is due to the olive oil and sugar in the dough. 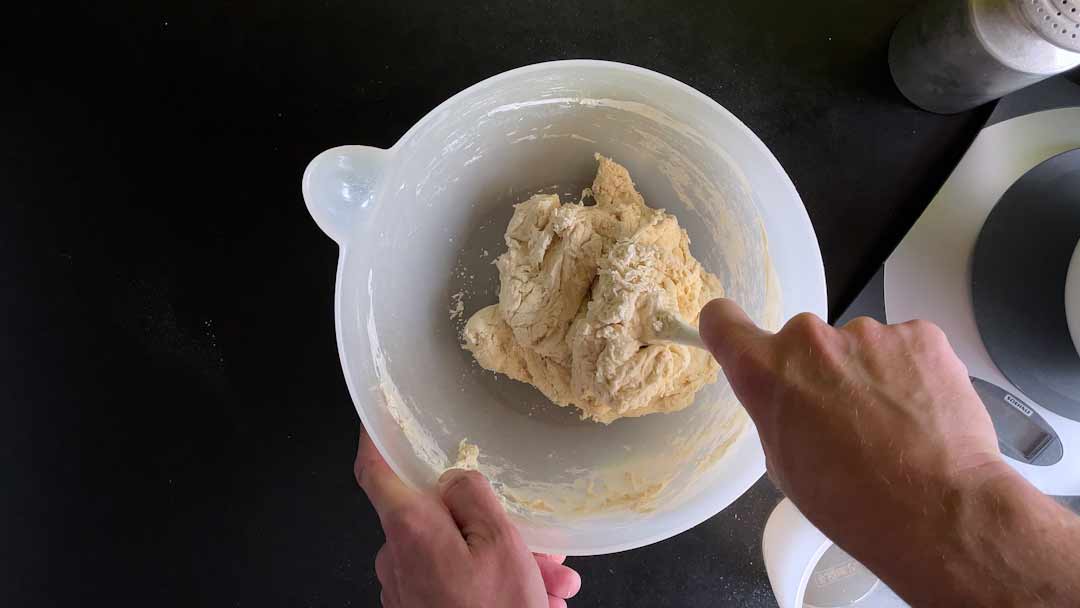 We still mix by hand the old-fashioned way. Given the amount of pizza we make, it might be time for a food processor. It takes a bit of muscle power to do it by hand, but the result is the same. We stir all the ingredients, without the olive oil, until you can see no more dry flour in the bowl. 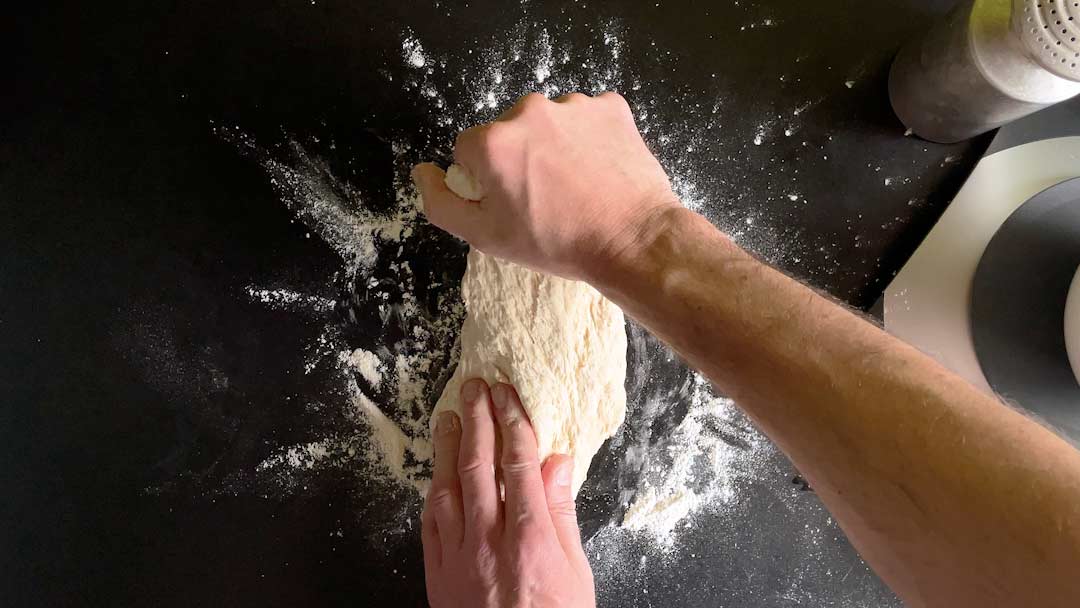 Then we sprinkle some flour on the counter and knead the dough. We do this by pulling out the dough and folding it in half. Turn it a quarter turn and then pull it out again and fold it in half. We keep repeating this until we have an elastic and even dough.

Then the dough ball goes back into the bowl, and we rub it on all sides with two tablespoons of olive oil. A damp dishcloth is placed over the bowl to ensure that the surface of the dough does not dry out. We leave the dough rise at room temperature for 2 hours. 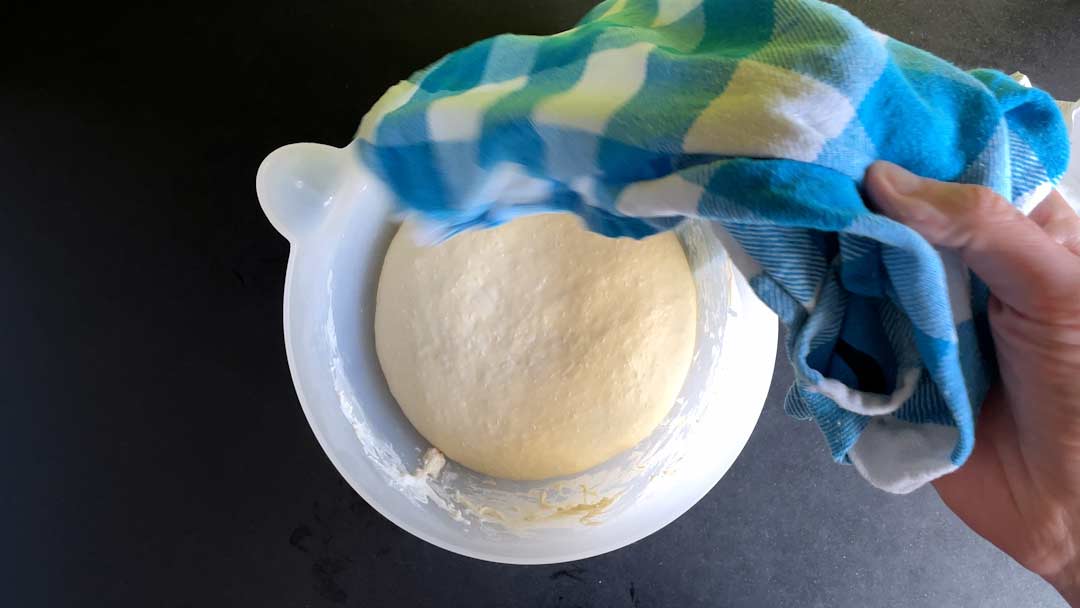 After 2 hours, the dough has doubled in size. You see large air bubbles here and there that we are pushing out again. 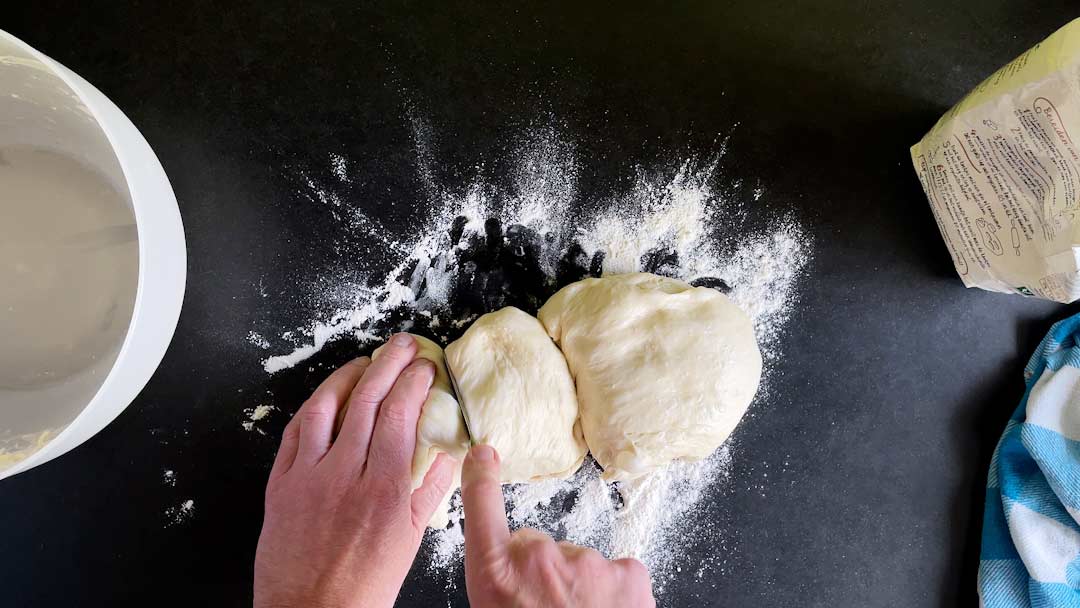 Now we divide the dough into four equal parts. You can weigh it, but we always do it by eye. 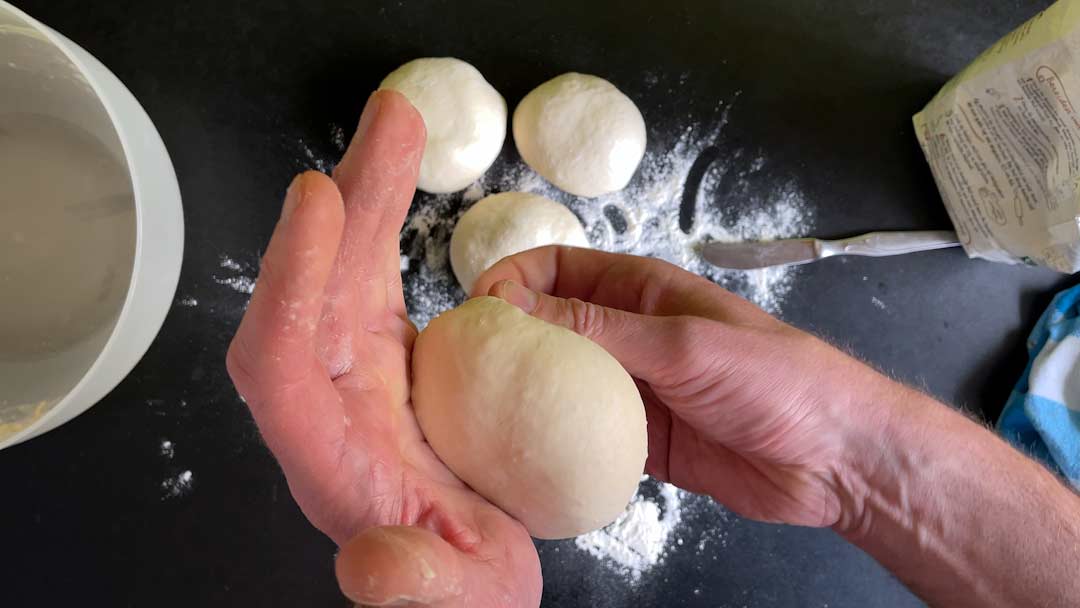 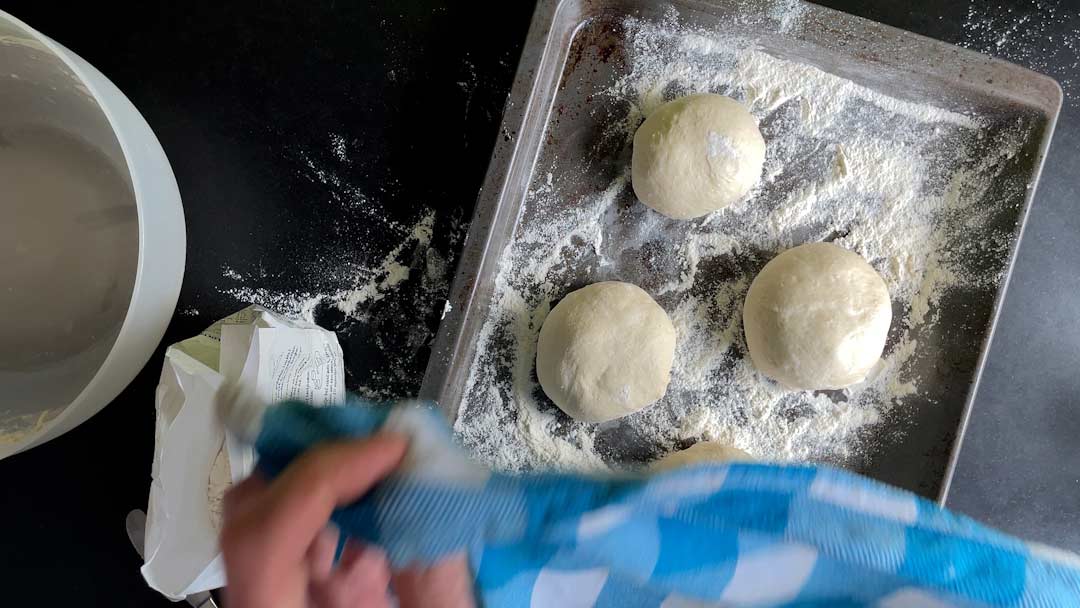 We place the balls on a floured oven tray and cover it again with a damp dishcloth. We let the balls rise again for 2 hours. This is the time to convert the kamado into a pizza oven. 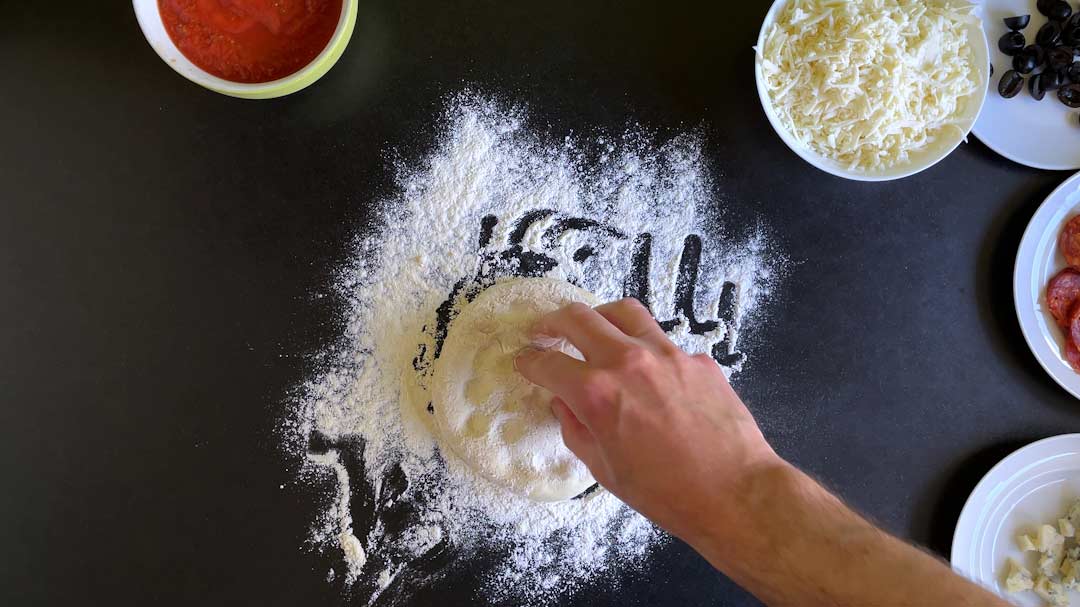 After 2 hours of rising, we place the ball on the counter and gently press the ball with our fingers into a disk without touching the edges. Keep doing this until the disc is a nice circle of about 10-12 cm. 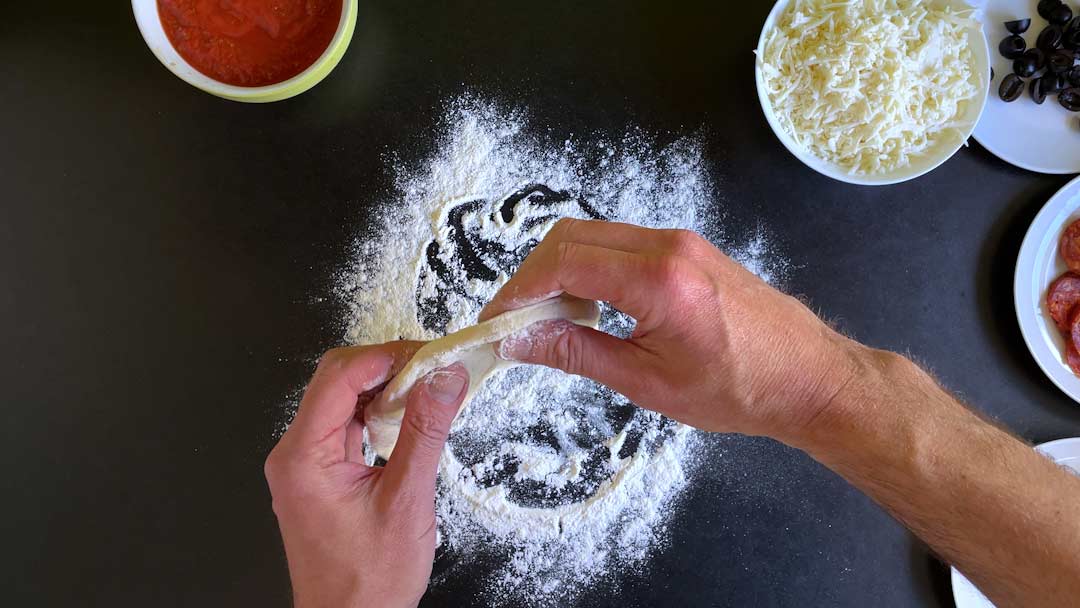 Then we lift the disc and rotate it between both hands. You do this still without grabbing the edge. Due to gravity, the disc expands on its own. Keep spinning until the disc is just a little bigger than your hand. 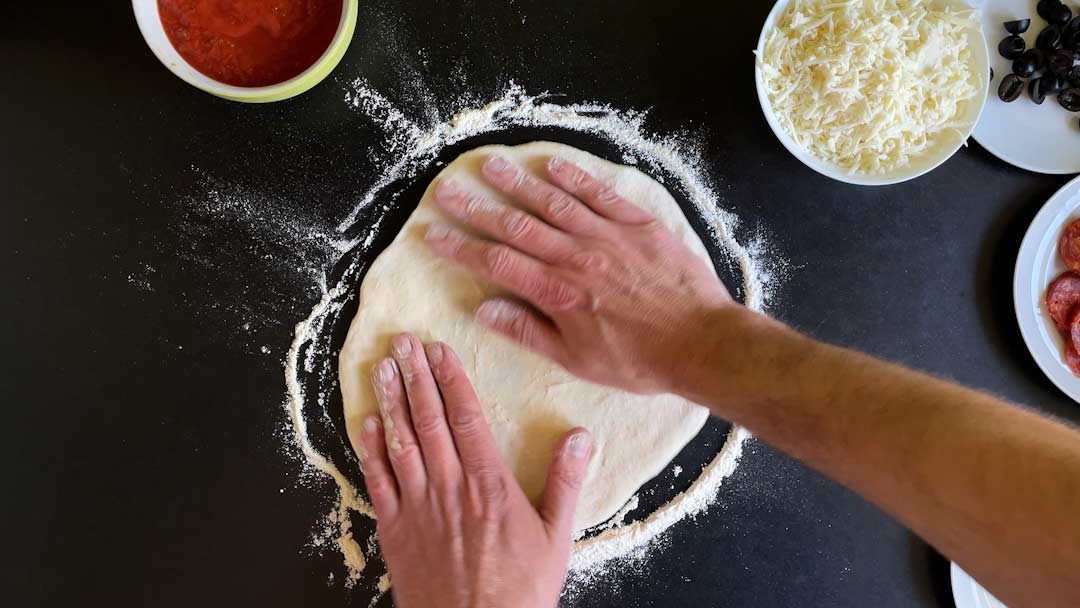 Then put the disc back on the counter and turn it around with your right-hand flat on the disc. With the fingers of your left hand, gently push the disc out while turning it. Do this until the disc is about 30 cm. 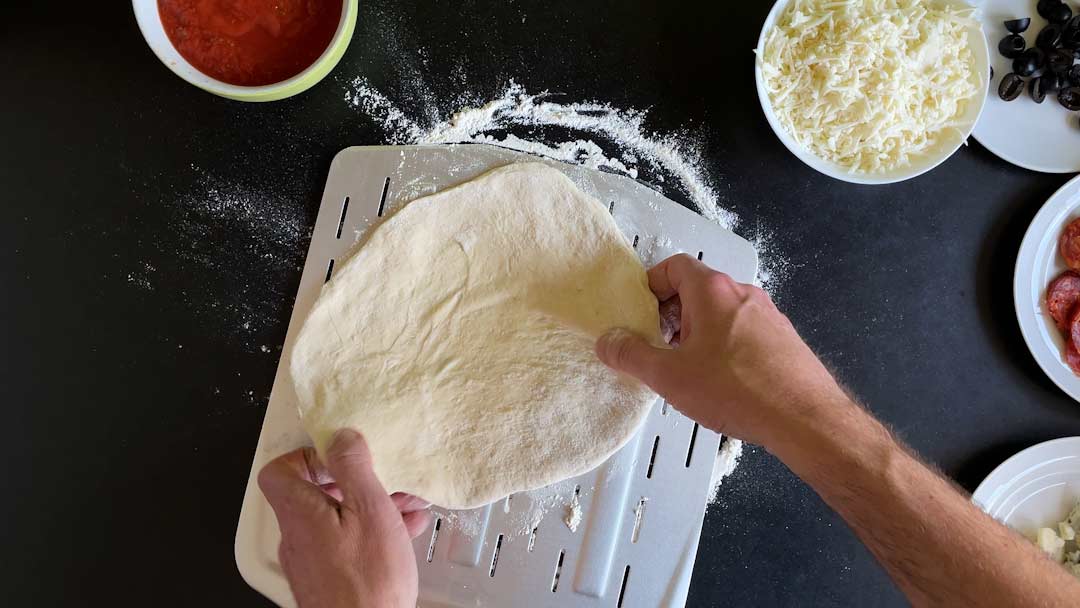 Then you pull the pizza base onto the pizza peel. Then you can top it with everything you need. Because you made the base on the counter with enough flour underneath, you don’t need extra flour to prevent the pizza from sticking to the peel. Also, you don’t throw more flour under the dough. You will end up with a pizza base covered with flour. The remains that are left on the pizza stone will only burn.

Now that you know how to make pizza dough, you can make it yourself. Let us know how it worked. Or better! Take a photo and post it on Instagram. Tag @bbq.heroes so we can see what your pizza looks like.