Focaccia with cheese and onion from the skillet

Focaccia is an Italian flatbread. It looks a bit like an American pizza with a thick bottom, and the preparation is almost the same.
We topped the focaccia with extra cheese and onion because we like that. You can go even crazier with some tomato or pieces of bacon. 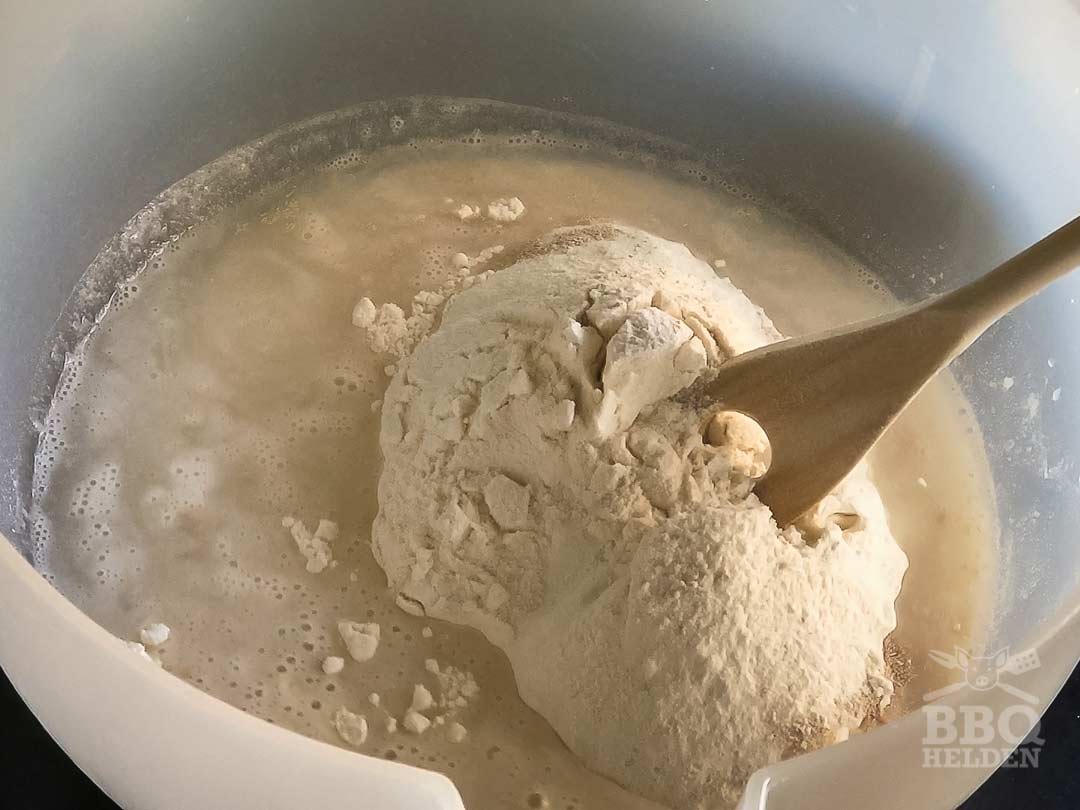 The dough for focaccia is very straightforward to make. It is a matter of throwing all the ingredients in a bowl and stirring. This no-knead dough was made up by Jim Lahey. With this dough, anyone can bake bread or focaccia. Just assume that if we can do it, then you must undoubtedly succeed. 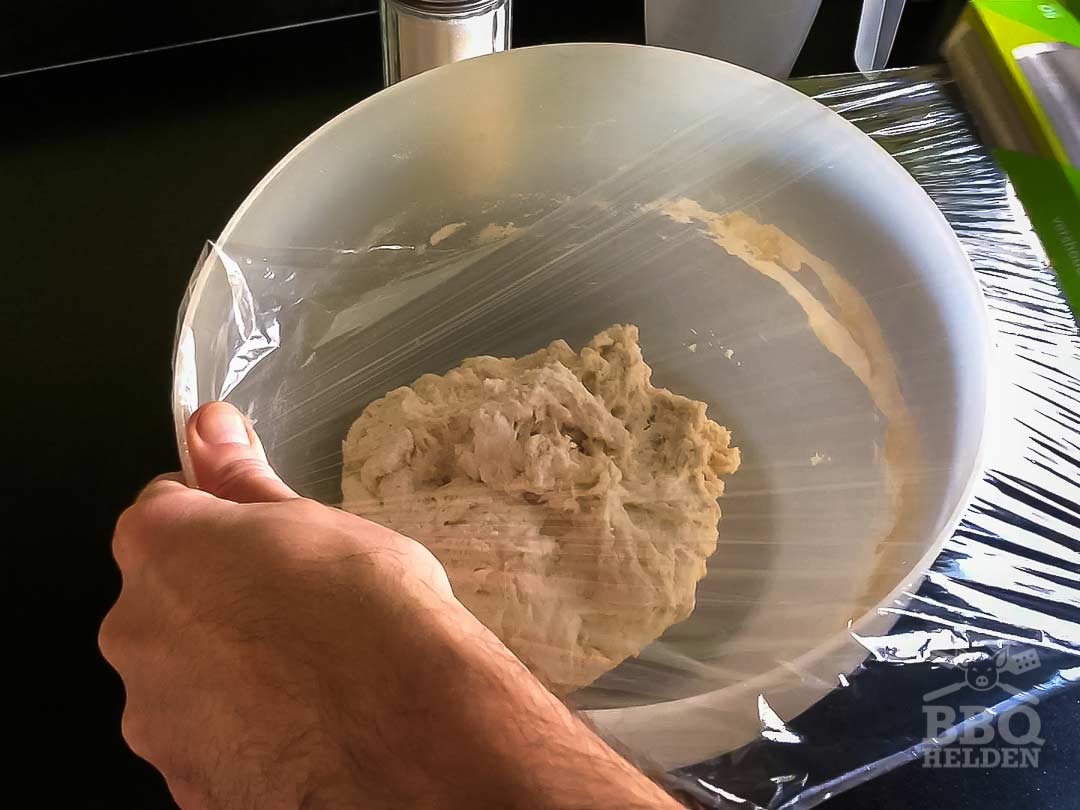 You can’t call this a nice ball of dough. But if all goes well, we will see excellent soft dough that will rise to be at least twice as large in 15 to 20 hours.

We cover this container with some cling foil and leave it on the counter. Within 8 hours, this dough will be doubled in size. You can let it stand for a total of 20 hours. 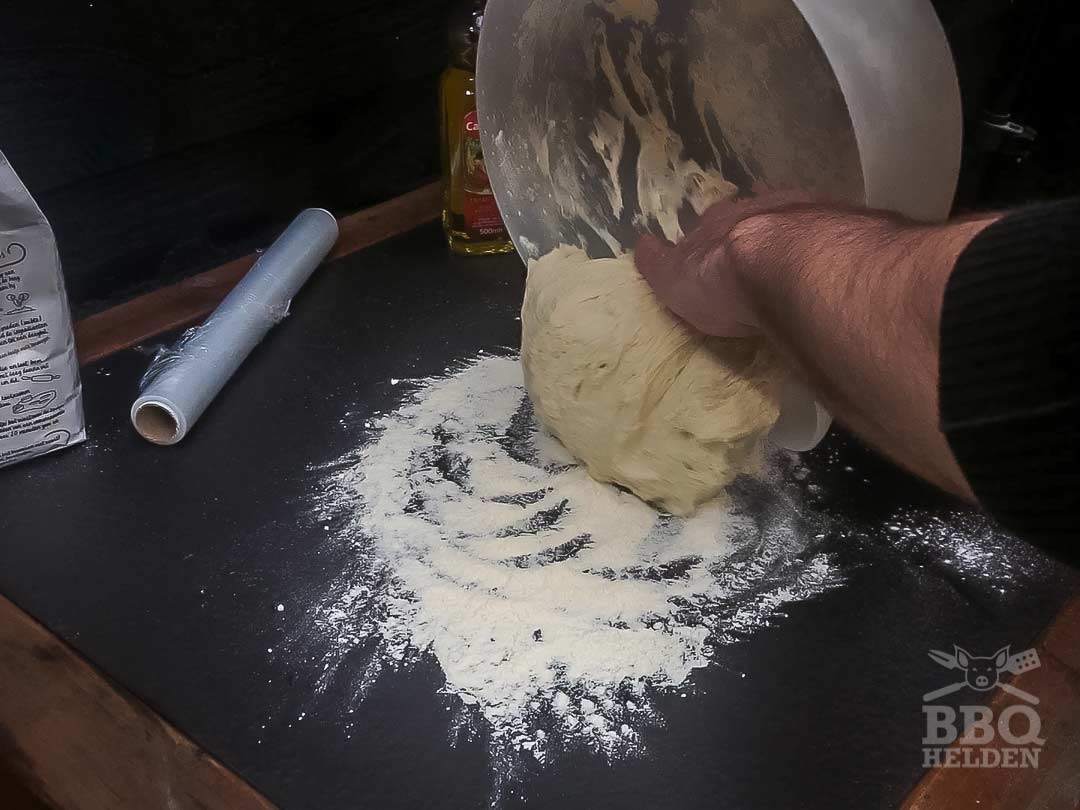 The next day we will continue to process the dough. You are supposed to form the dough into a round ball. This is the hardest part of the entire recipe.

The easiest way is to provide your hands with a generous amount of flour. You then hold the dough in one palm and with the other hand pull the ball from top to bottom to 1 point while turning the ball in your palm.

It is a technique that you just need to get the hang of but with a little practice that will succeed. 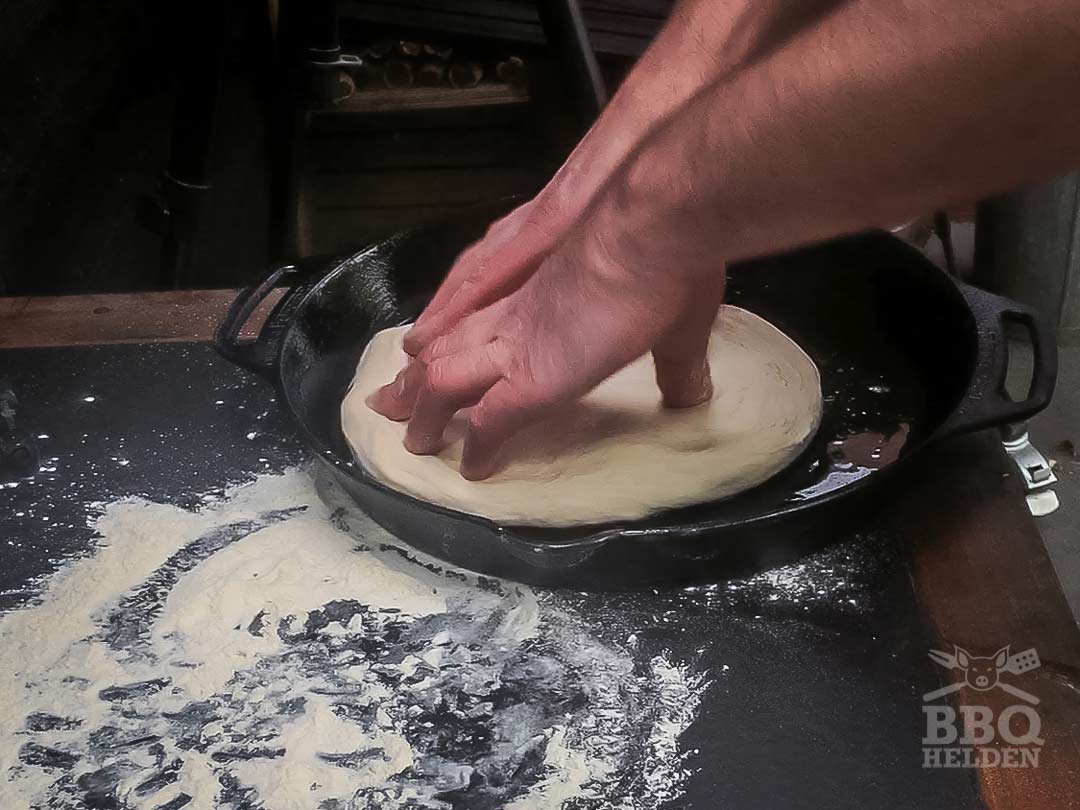 Once you have formed the ball, you can coat the skillet with a little olive oil and put the ball of dough in the skillet. You can now carefully push the sphere with the fingertips in the shape of the skillet.

That will not succeed, and that is no problem. The dough will become softer after the second time rising, and it will almost fill the skillet on its own. 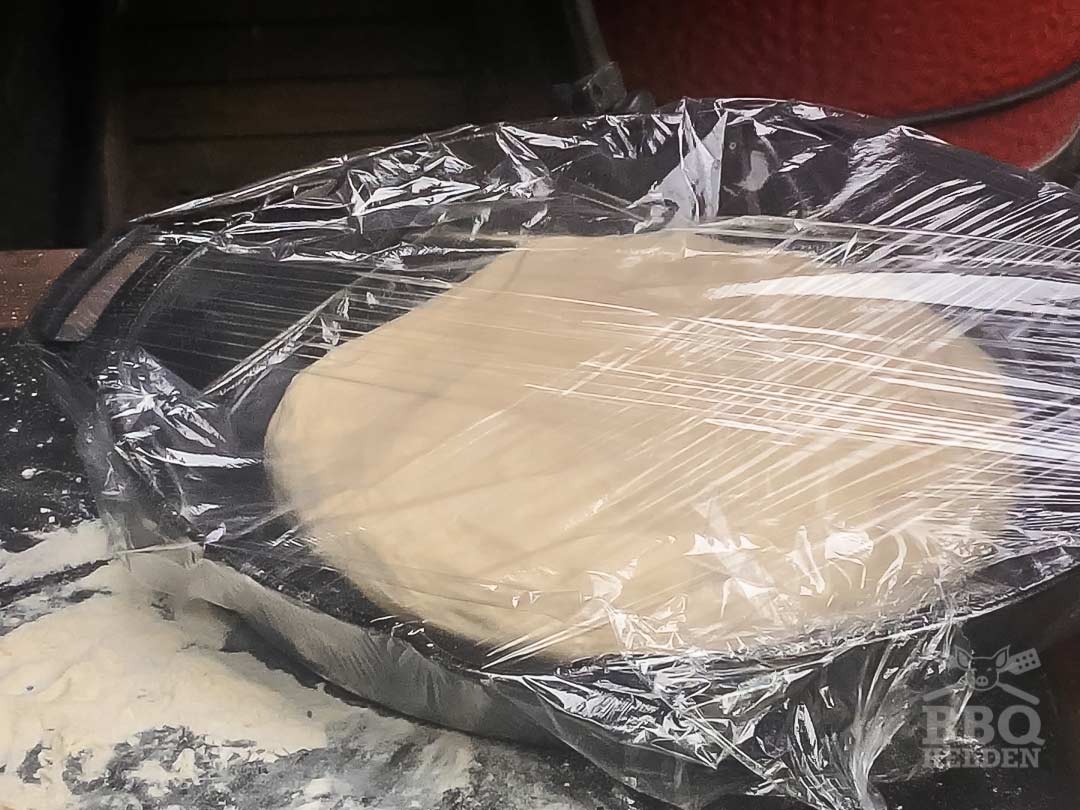 Close the skillet again with cling foil and put it back on the counter. 2 hours is enough. 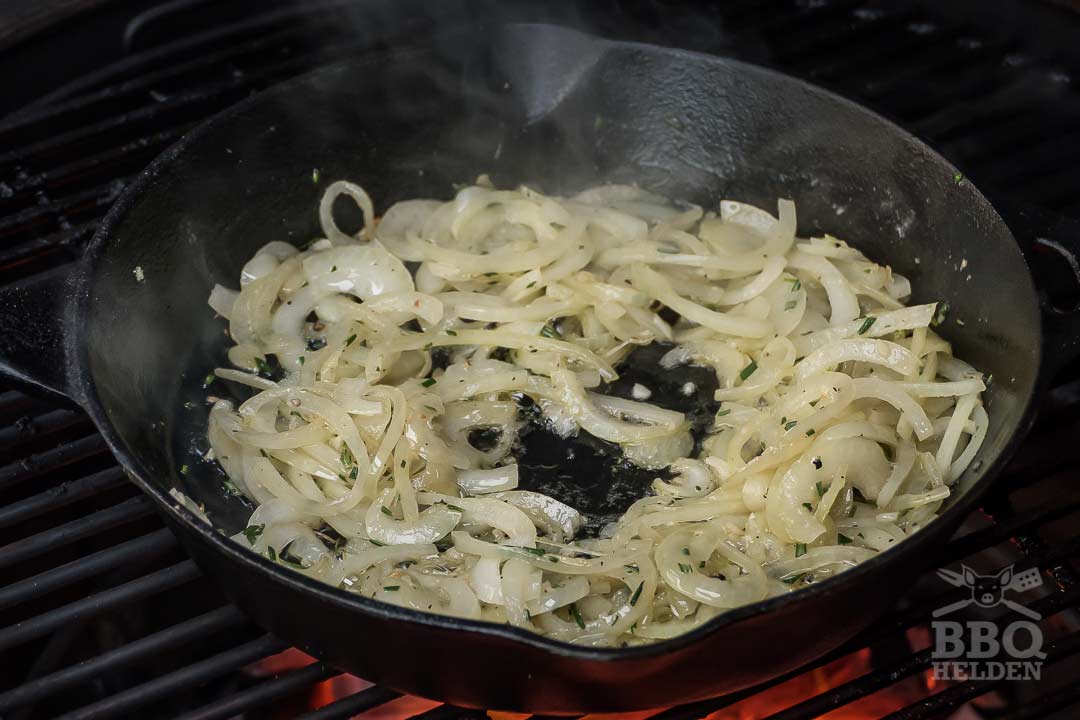 Meanwhile, we can cook the onions. You are not supposed to caramelize them so that they turn very brown. They only need to become soft. 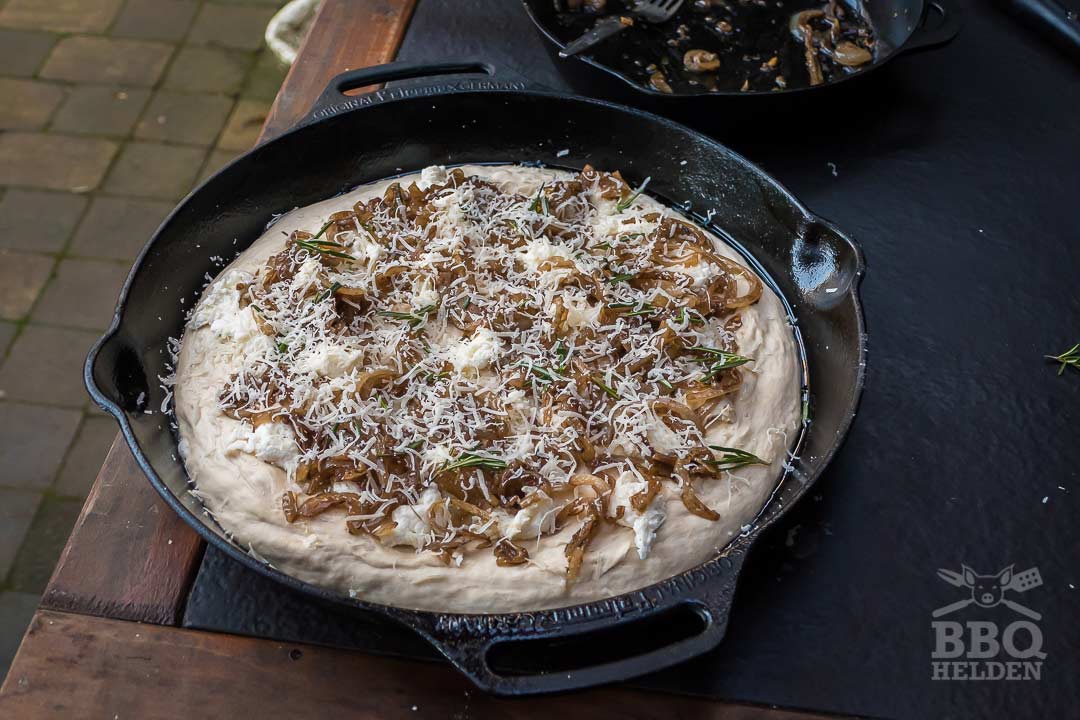 After 2 hours, the dough has become softer, and you will see that the dough covers the skillet from edge to edge. Carefully cover the dough with mozzarella, onion, and Parmesan.

By the way, we have pulled the mozzarella into pieces beforehand and let it dry in a few sheets of kitchen paper. If the mozzarella is too wet, the dough will also get too wet during baking, and the top will not turn brown nicely. 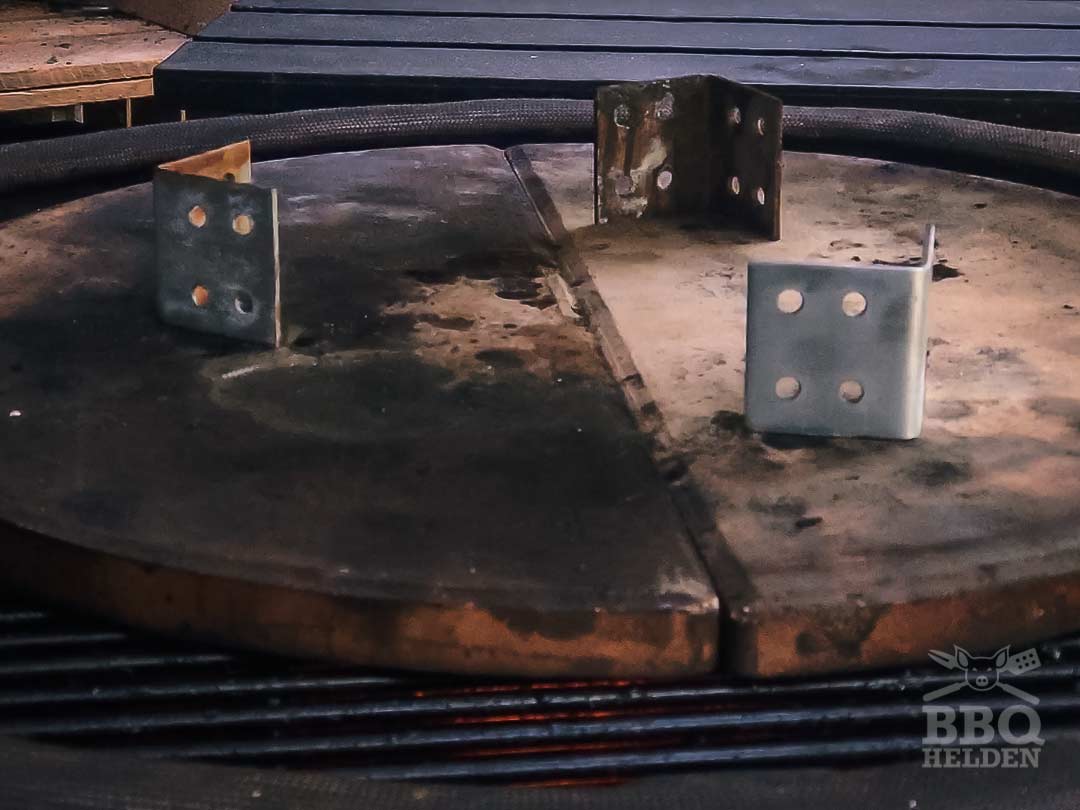 The skillet is intended to be placed in the barbecue as high as possible so that the radiant heat coming from the lid ensures that the top is nicely browned. You must also bear in mind that you do not directly heat the skillet, as otherwise, the bottom of the bread will burn.

We place a plate setter on the grid so that it rises higher, and we put a pizza stone on top with some space in between. We use some metal reinforcement corners. You can also do it with a wad of tin foil. 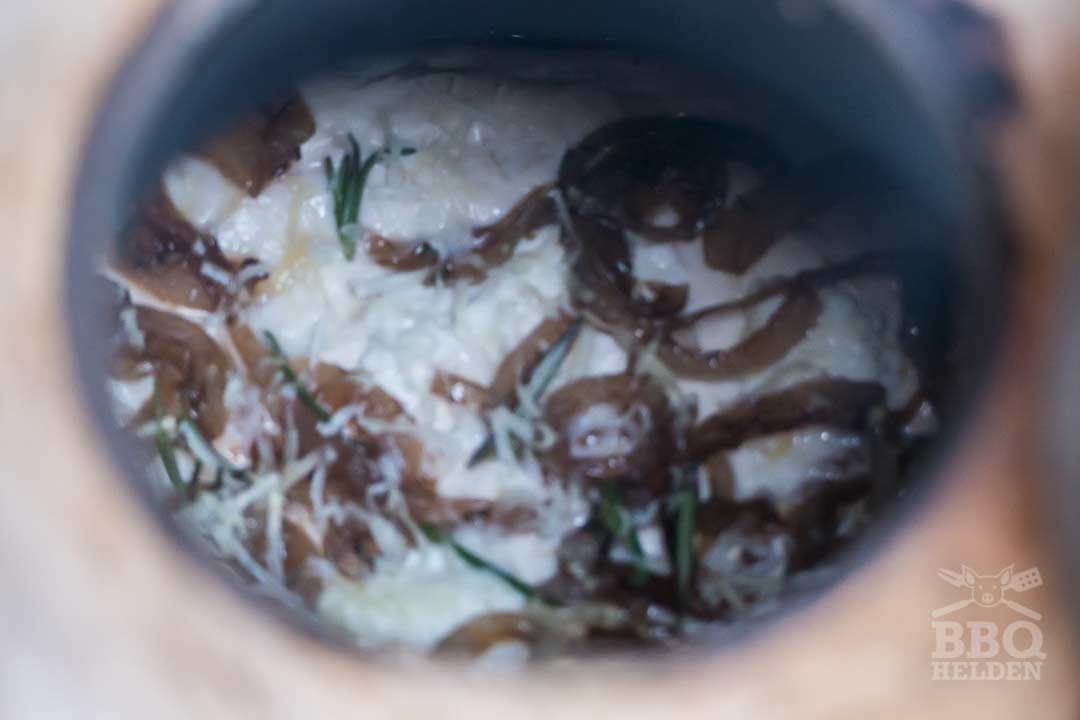 We bake the focaccia at a high temperature of around 300°C (570F). So you use soft charcoal, and you open all the air sliders, and the top vent goes off completely.

Because you prefer to keep the barbecue closed as much as possible, we occasionally look through the opening of the top vent to see how far the focaccia is. 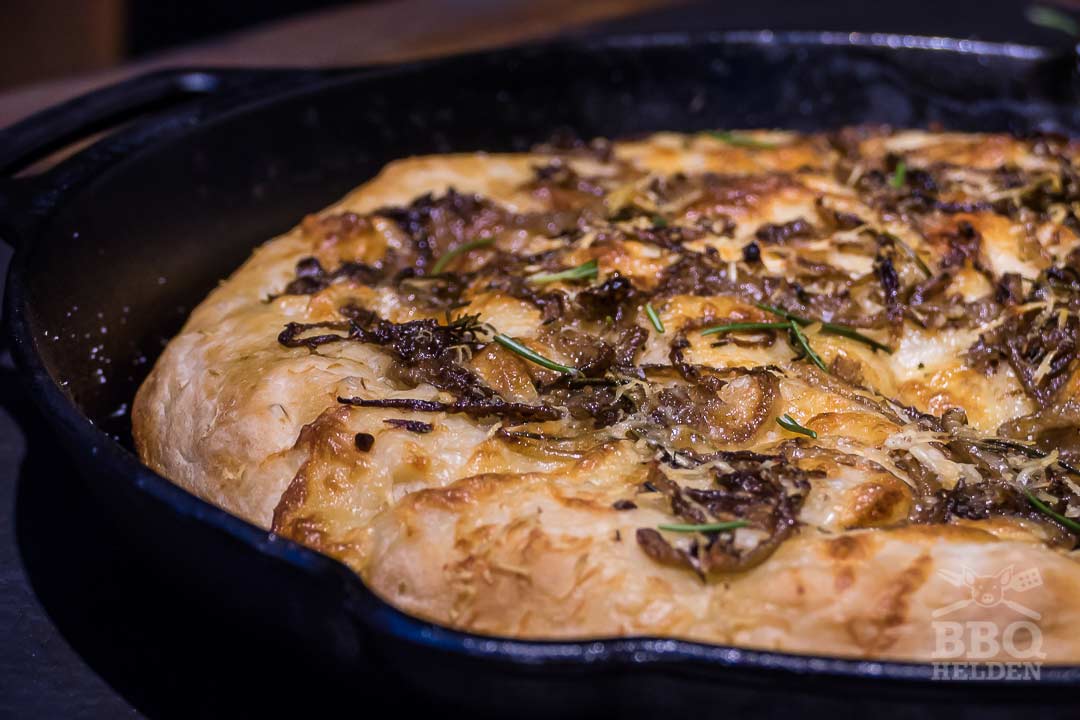 The focaccia should look like this after 20 to 30 minutes. The bottom has been nicely baked in the cast iron skillet and is a beautiful golden brown. 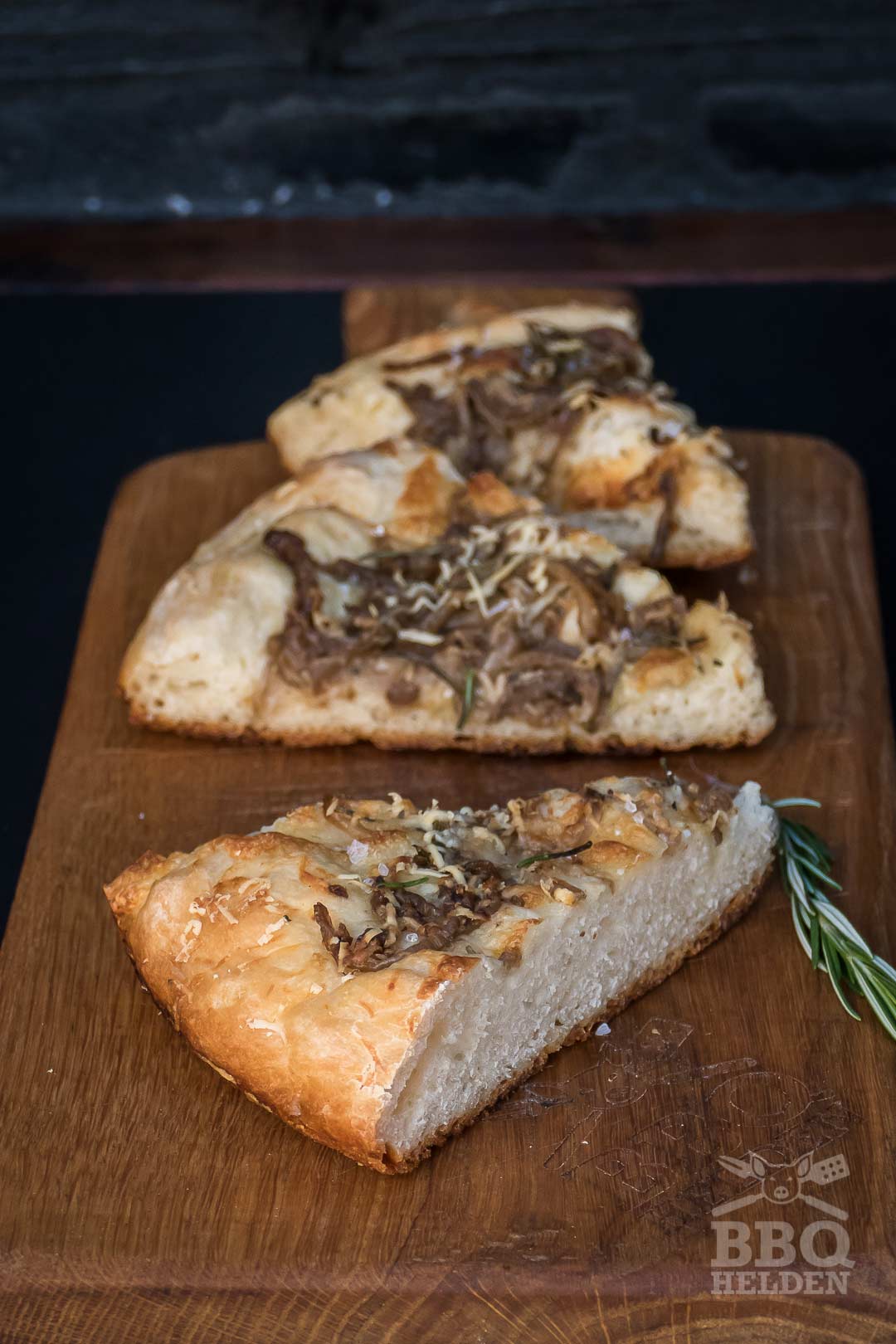 Allow the focaccia to cool slightly, and then you can cut the bread.