spaghetti with ribeye and pasta sauce 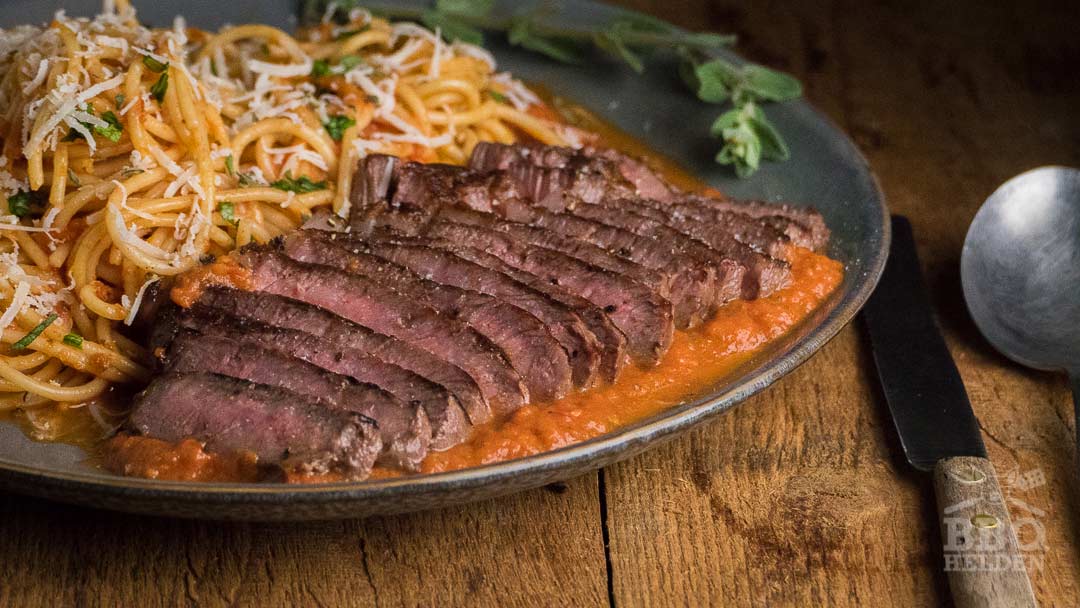 The best pasta sauce is the one you have made yourself. It’s that simple. You know exactly what you’ve put in it. Tomatoes, onions, garlic, and fresh herbs. If you also put all this in the grill first, you’ll lift all of the flavors. You can actually taste thee tomatoes.

We grilled a few inch-thick ribeyes to go with the sauce, but you can also use it very well on pizza. You can also portion and freeze the sauce, so make sure you make enough. 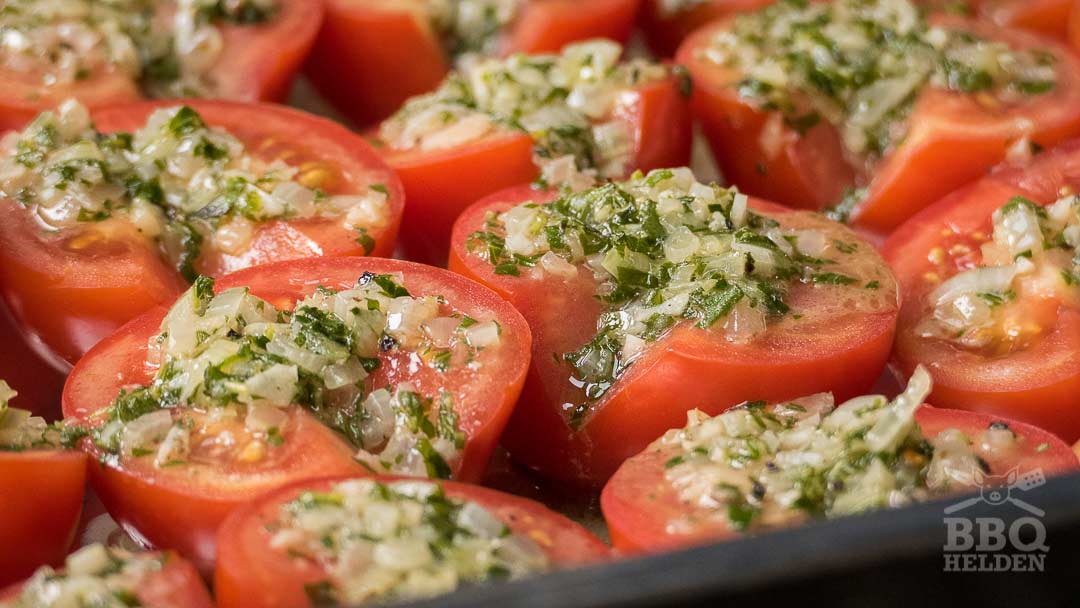 The trickiest part of this recipe is preparing the tomatoes. You cut them in half, and then you remove the stem. That’s all. So it is actually not too bad. After that, it is merely adding a scoop of the onion, garlic, and spice mix to each tomato. 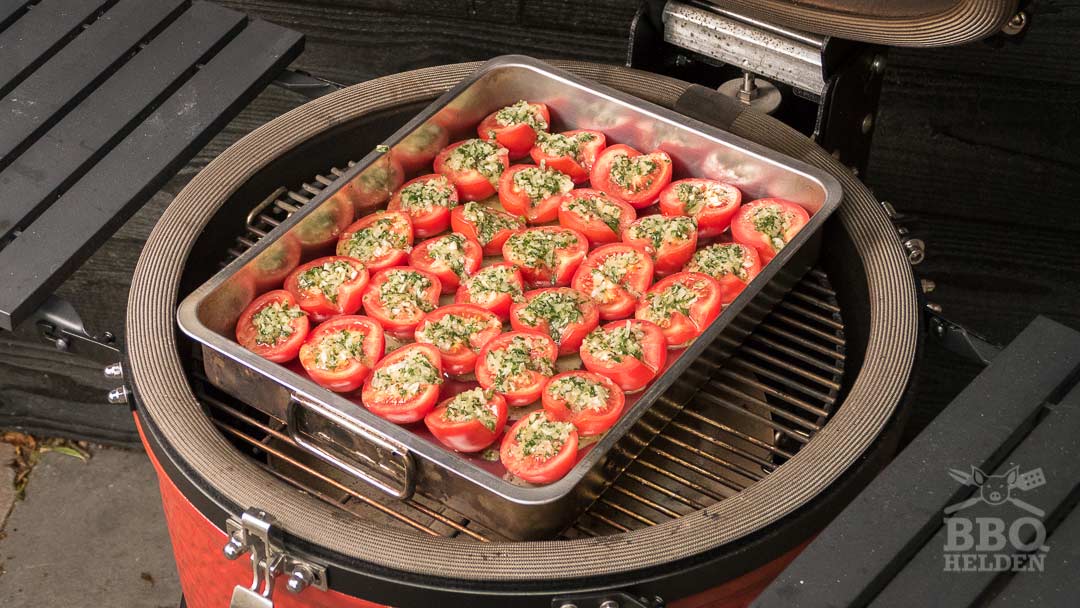 We use the Kamado Joe Classic as an oven. We place the platesetters and adjust it to a temperature of 160°C (320F). We have the tomatoes in a stainless steel oven tray. Just a tip in between. The Koncis from Ikea fits precisely into the classic. 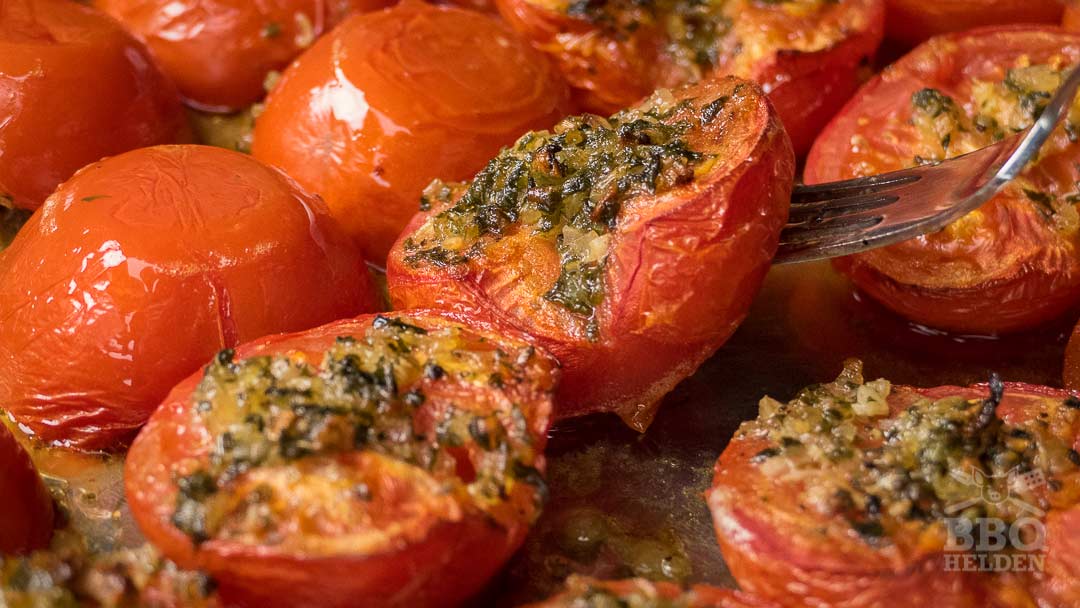 After two hours, we flip the tomatoes over. Then the tomatoes continue to cook while they are in their own juice and olive oil. The smell is already great. This is the moment when the neighbors get hungry too. 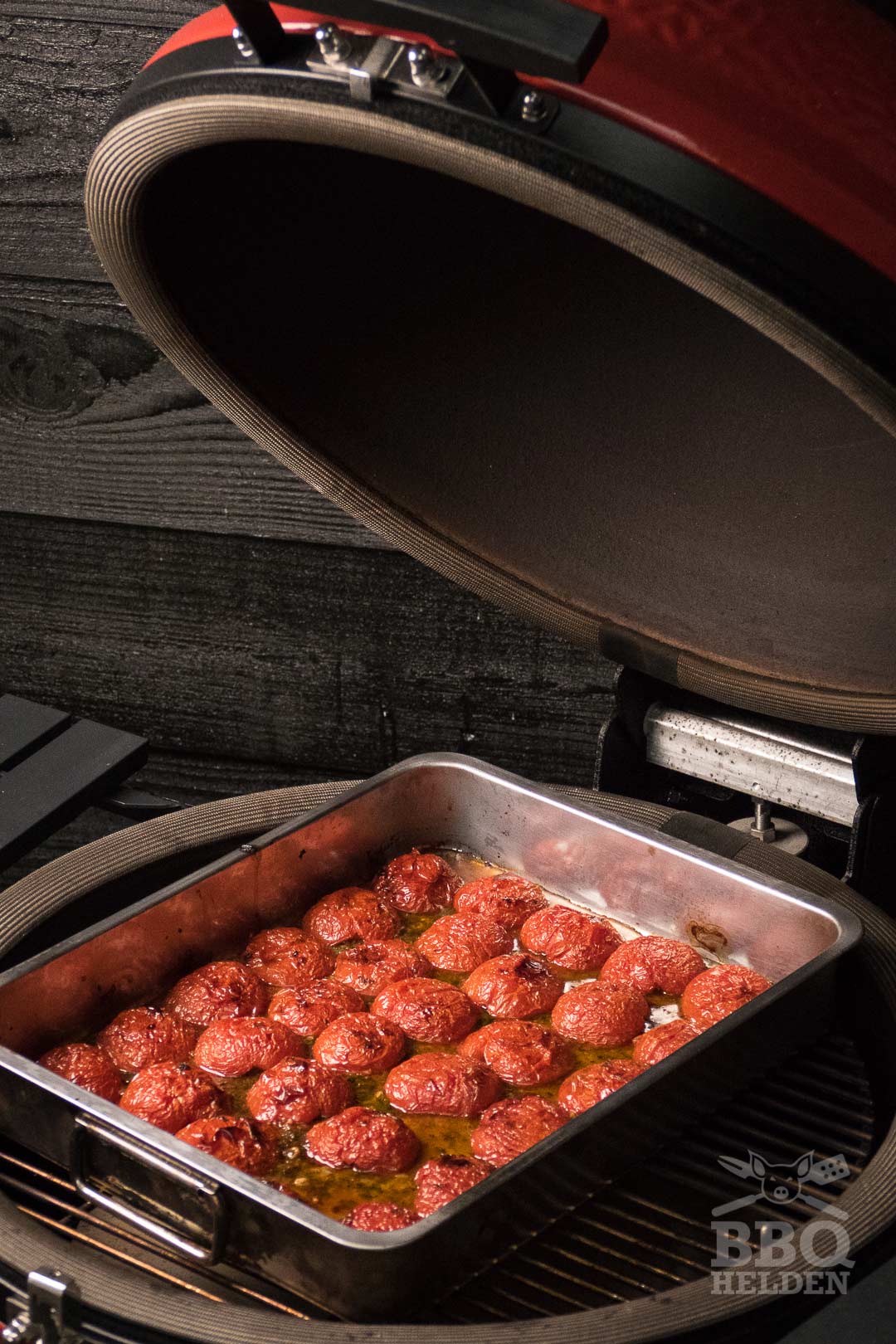 After another half hour, this is the result. The tomatoes are completely shriveled, and the juices are at the bottom of the tray. In principle, you can throw this in the blender, and then you have your sauce. 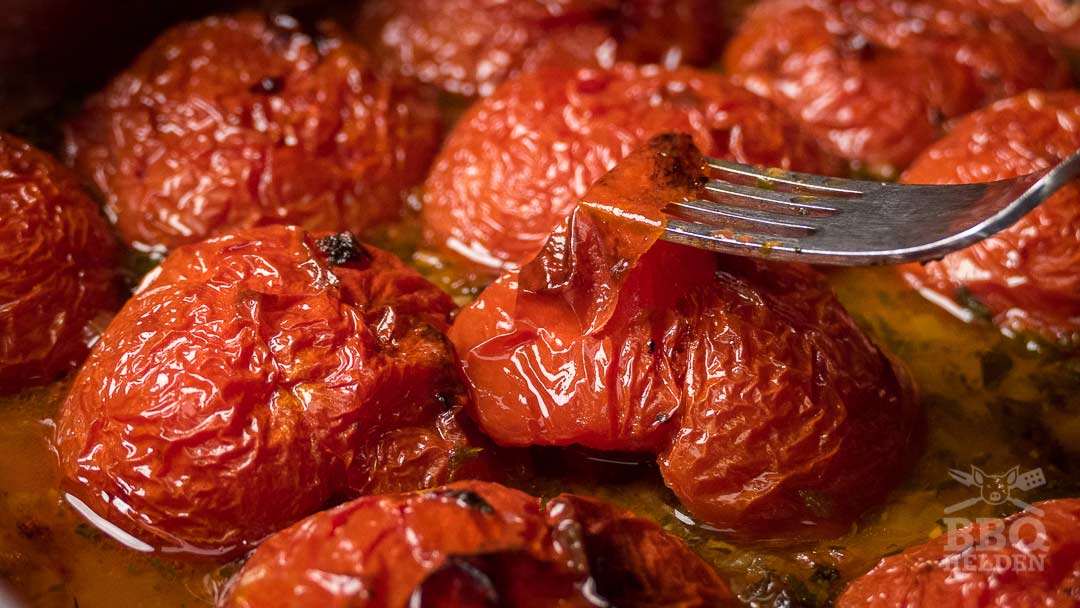 We remove the skin to get a smoother sauce. This is very easy because the skin has come loose while cooking. With an extra minute or 3 of work, you are done.

By the way, this pasta sauce does not turn dark red the way you buy it. This is due to the antioxidants in the tomato. You could darken the color more by mixing in a glass of red wine or some tomato paste. But why would you? This sauce is really great as it is. 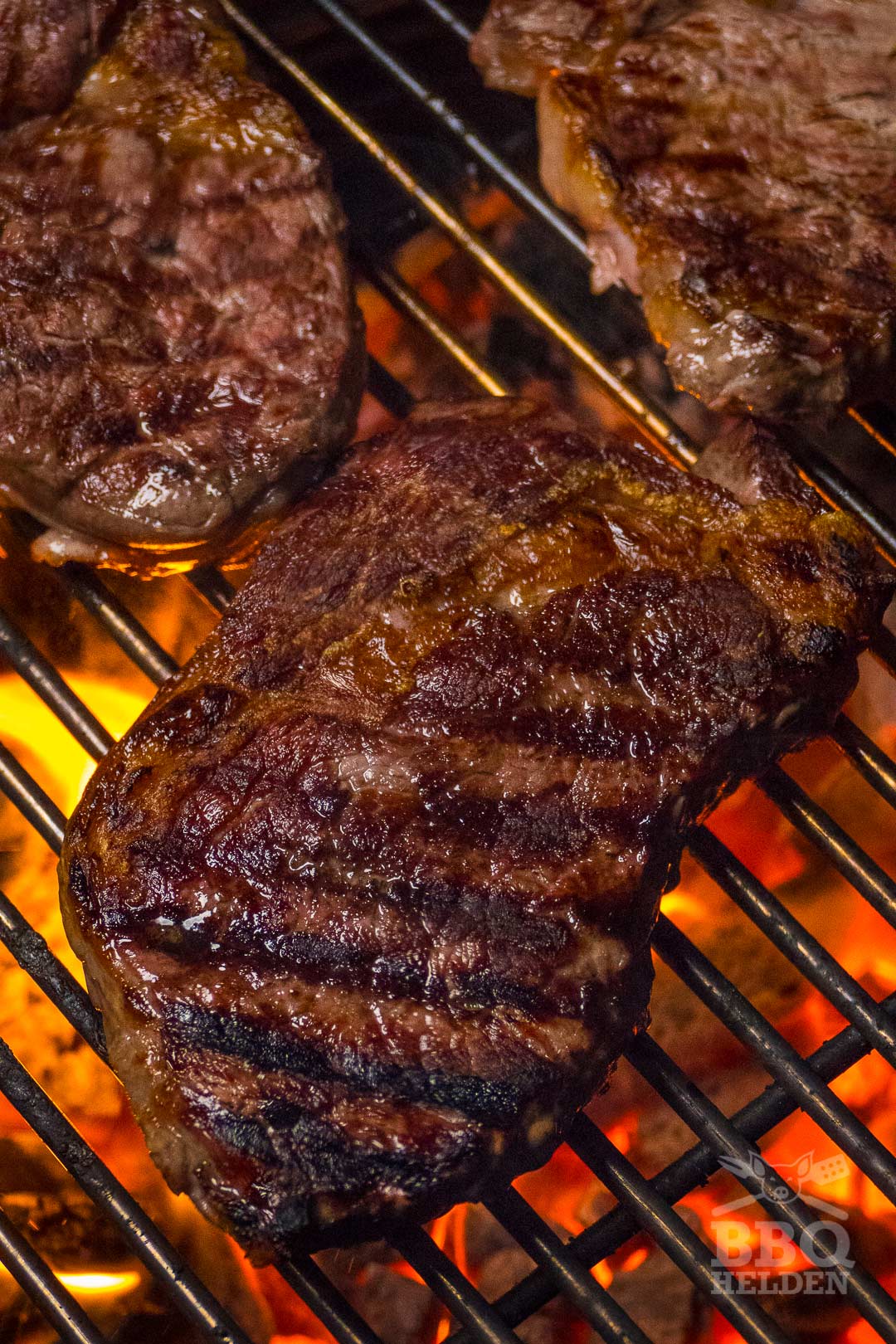 Then we remove the platesetters and heat up the grill. These are not very thick ribeyes, and to get them perfectly medium-rare, you keep flipping them to get this beautiful crust without the core temperature going too far. 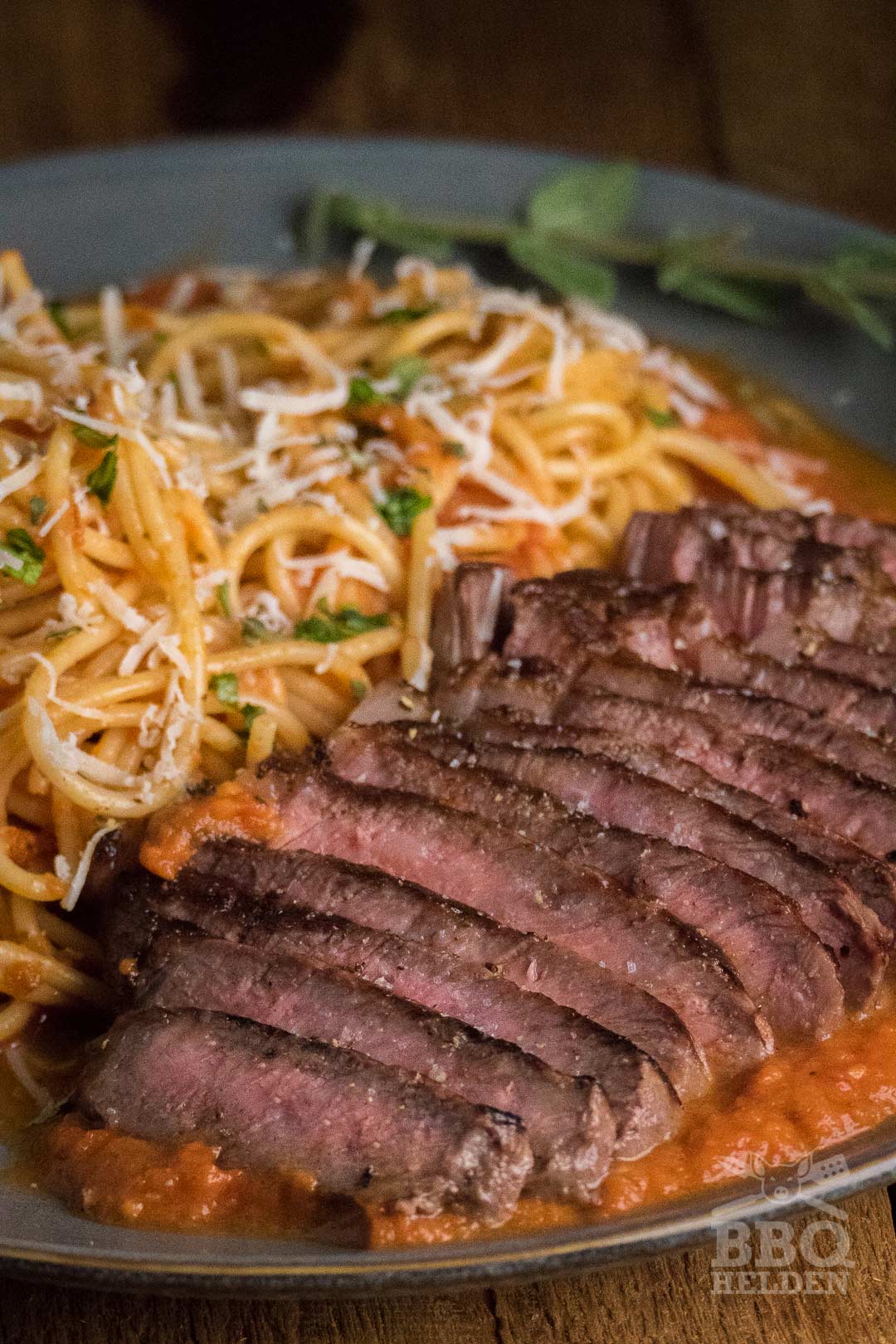 We are not going to tell you how to cook spaghetti. You can read that on the package. Cut the ribeye into nice slices and put it in the sauce. A little extra cheese over the spaghetti, and you are ready to go.