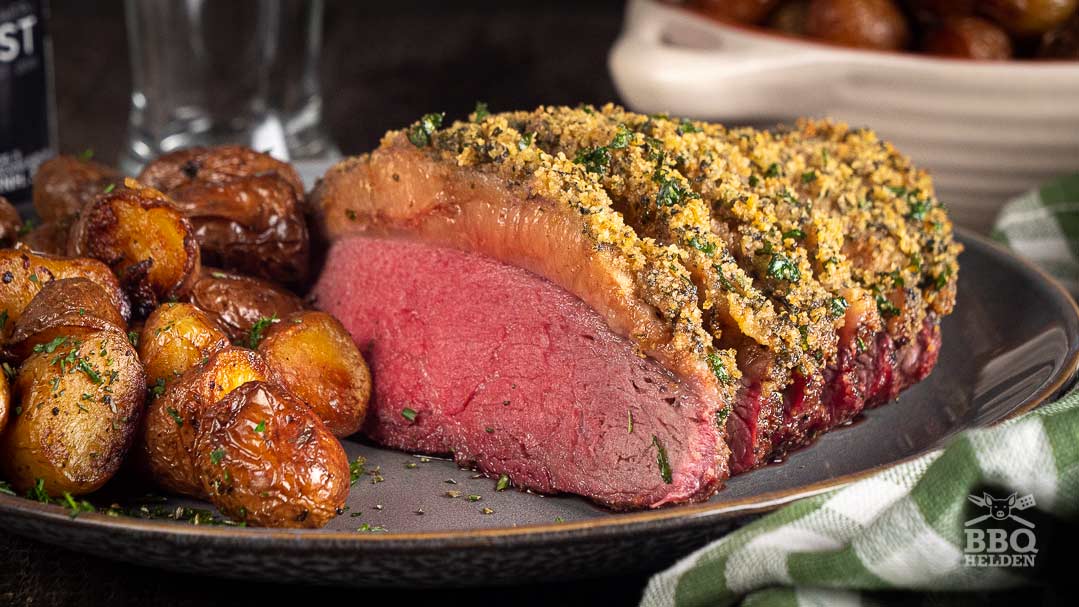 Picanha itself is a beautiful piece of meat. It has a good beef flavour and is deliciously tender. It comes from the top of the cow’s rump and has a triangular shape. It is also called rump cover or rump cap. My children call it the cow’s ass, so now you know where you can find it. A whole picanha is somewhere between one and one and a half kilos.

We have provided this picanha with a thick layer of fresh herbs that have formed a nice crust with the soft fat. If you put this on the table, you can be sure that there will be an enthusiastic response. 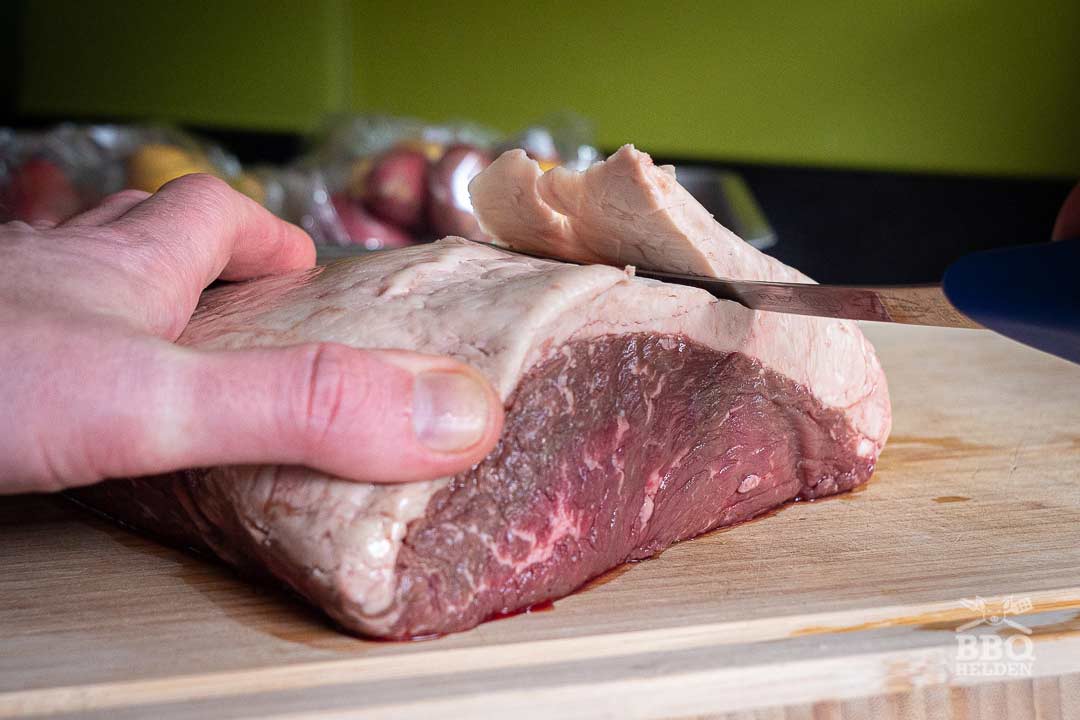 This picanha came with a very nice fat cap that we partially removed. You want a layer of fat that is about the same thickness. In this case, we go for a thickness of about 1 cm. 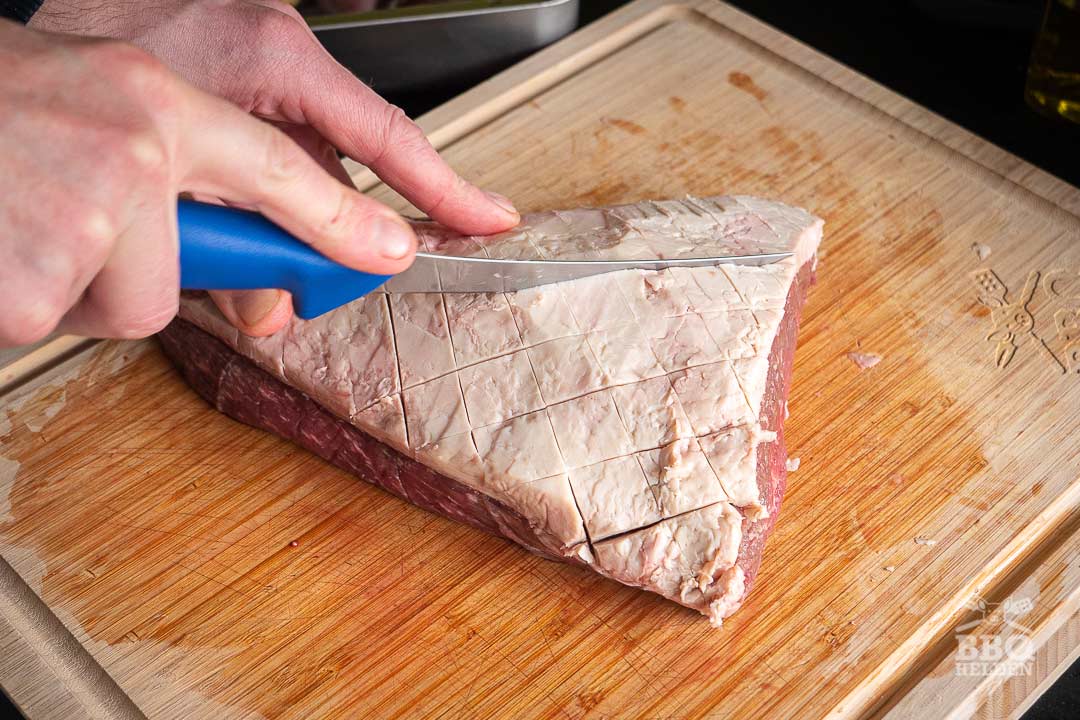 Then we carve the fat in a diamond pattern. This gives the fat the chance to soften faster to become edible. Fat contains the most flavour, and if you cut the meat so that you have a nice piece of meat with a bit of fat on your fork, you get the most beef flavour in your mouth. 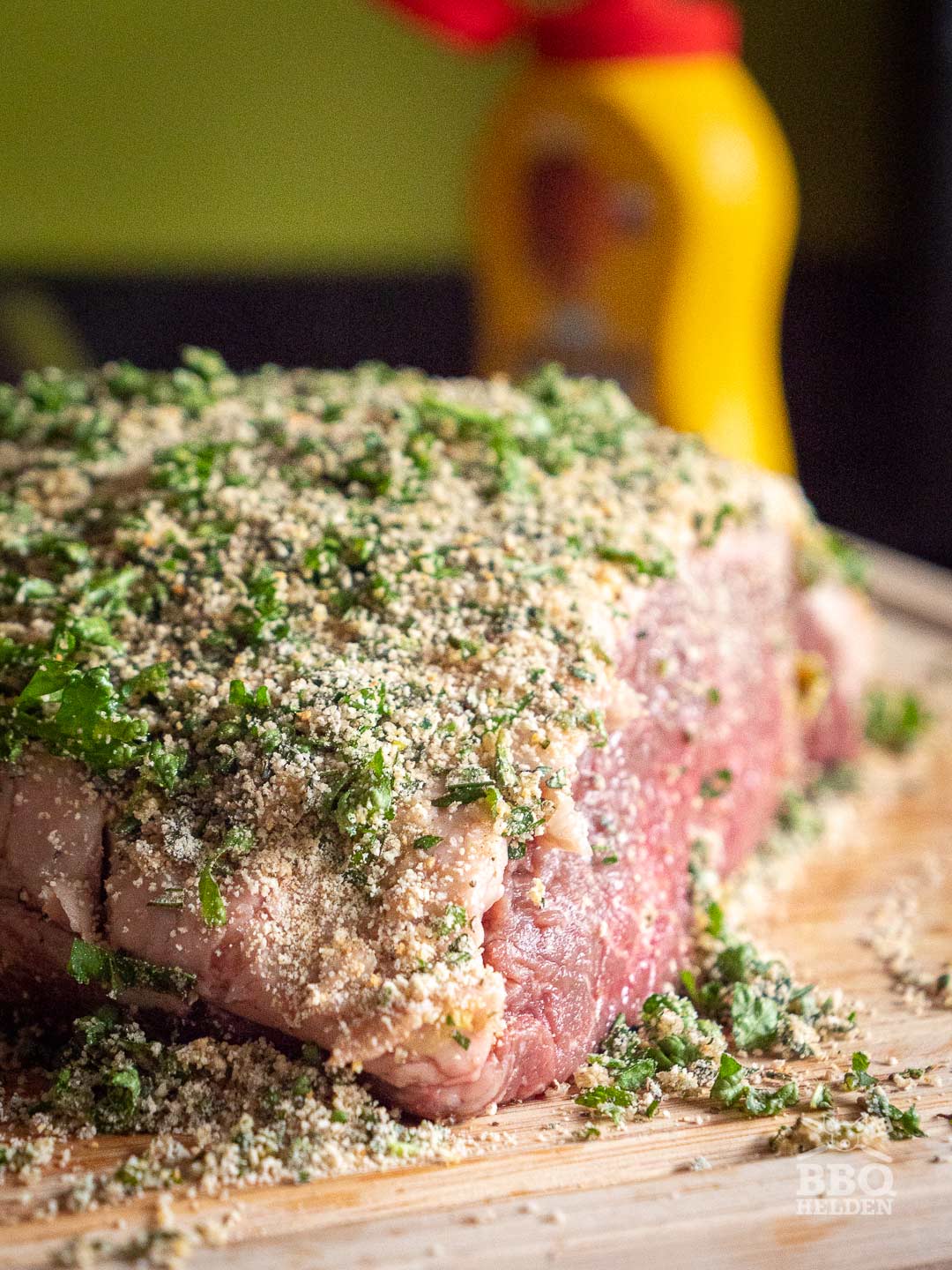 What we want is for the fat to become soft and for the breadcrumbs to soak up that fat. Then the breadcrumbs with the herbs will eventually form a crust. To make the breadcrumbs stick to the now still hard fat, we spread a layer of mustard on the fat layer. 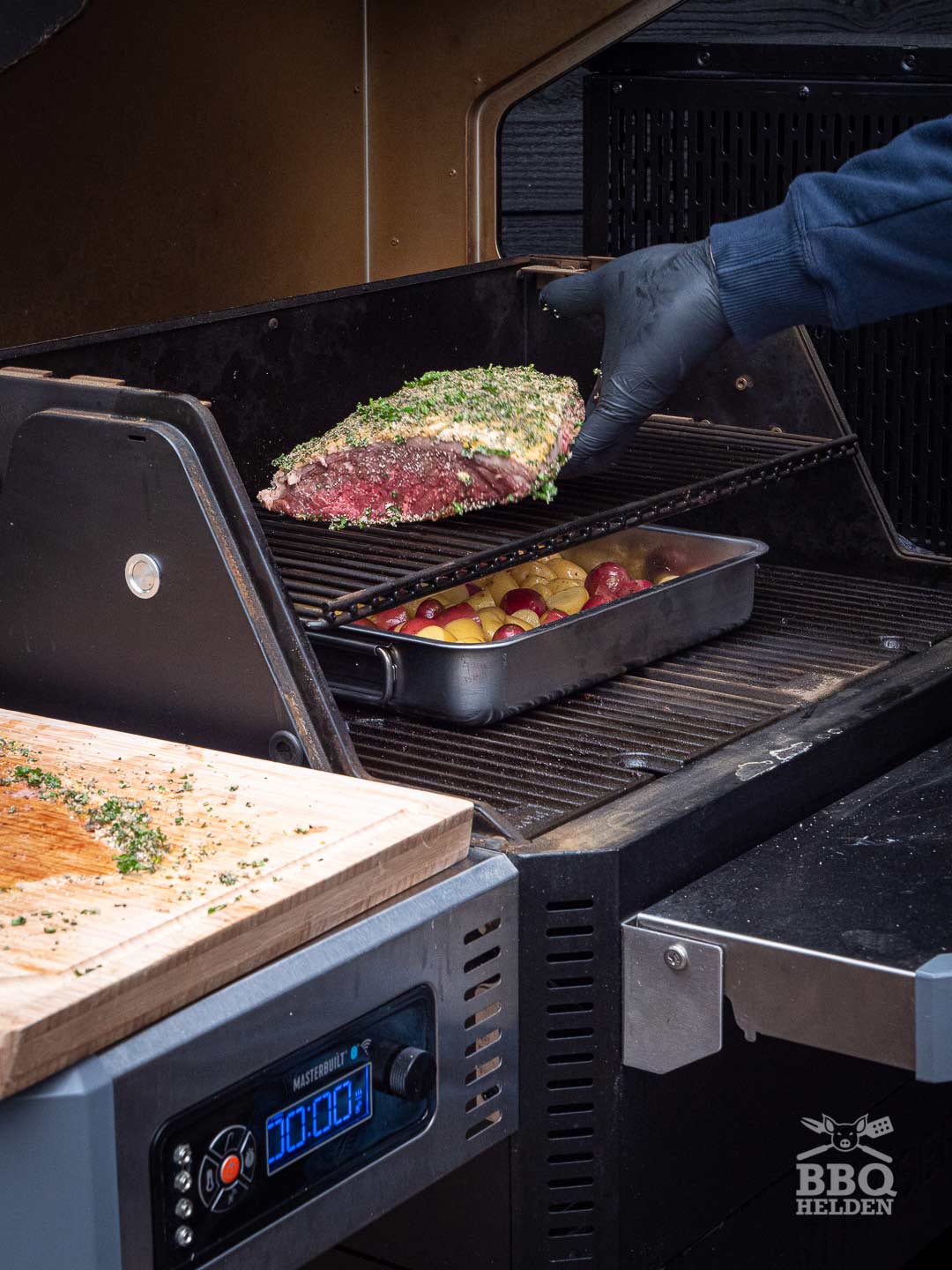 We set the smoker to a temperature off 150ºC (302F) and put the picanha on a rack with an oven tray with small potatoes underneath. The melting fat of the picanha drips into the tray and on the potatoes so that they roast in beef fat. We close the lid and wait for the core temperature to reach 52ºC (126F).

Then we set the smoker to 250ºC (482F) to get the herbed crust a bit drier for the last few minutes. 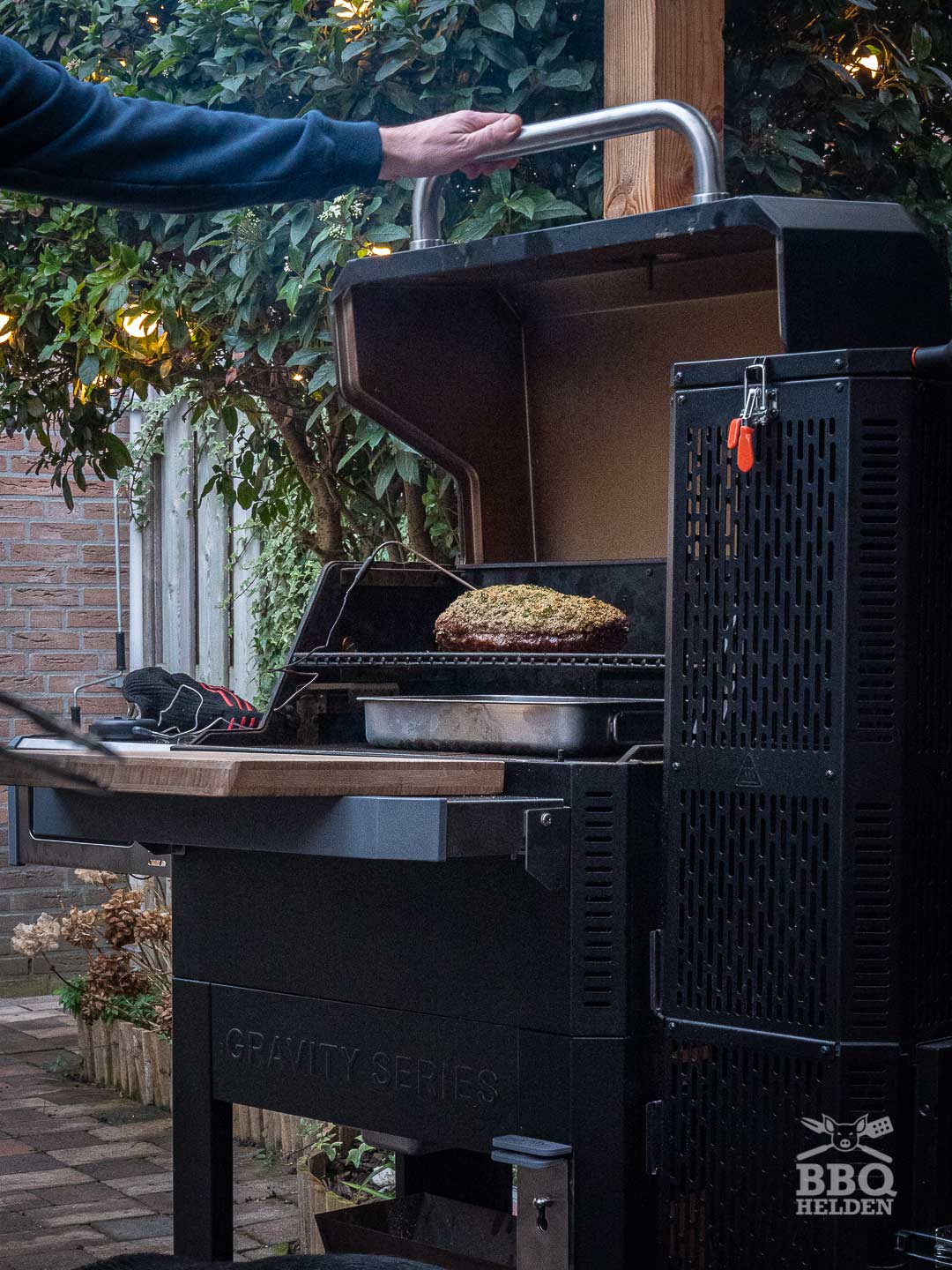 With a core temperature of 55ºC (131F), we remove the picanha from the smoker to rest. This is very important because all the moisture in the meat is forced out during cooking. If you cut into the meat immediately, the excess moisture will end up on your cutting board.

If you let the meat rest for a while so that the tension in the meat decreases again, the moisture will distribute back into the middle part of the meat. 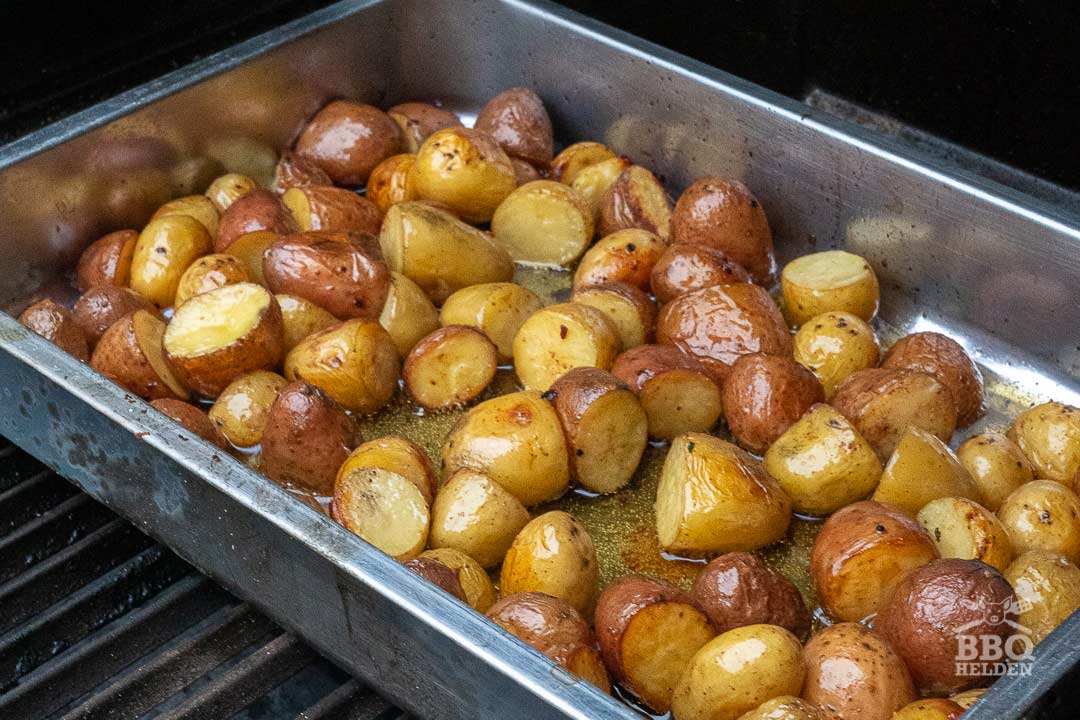 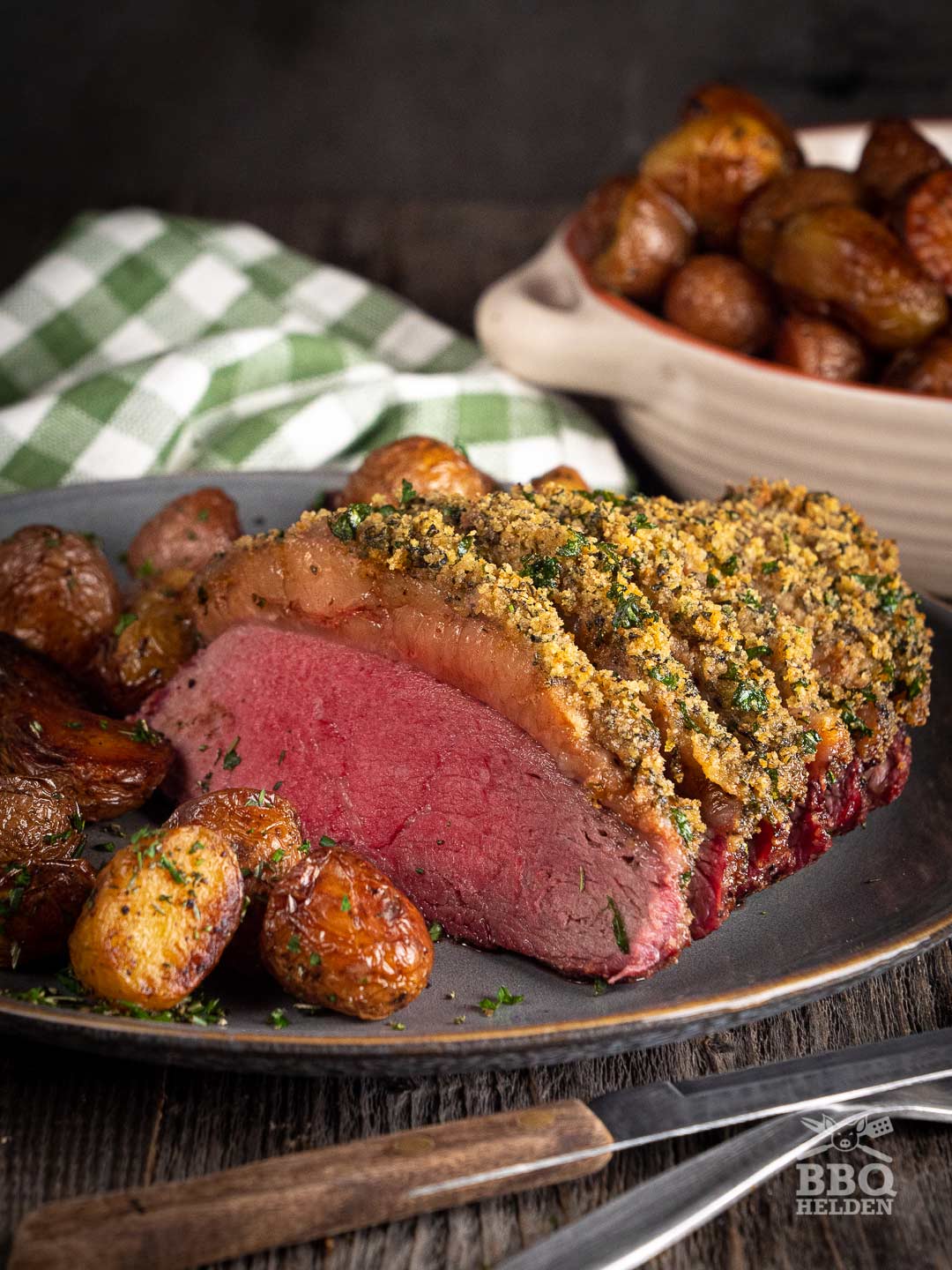 This is our herb-crusted picanha. Are you also going to make this beautiful piece of meat? Let us know in a comment below. Or better! Take a photo and post it on Instagram. Tag @bbq.heroes so we can see what you made.

For the herb crust