Brisket is perhaps one of the most challenging pieces of meat to prepare well. In recent years we have eaten both very good and very bad brisket and all levels in between. That already shows how difficult it is to turn this tough piece of meat into deliciously tender and juicy meat in just a few hours.

Brisket is also not a cheap kind of meat, and not every butcher just has it. But what he does have is chuck roast. This steak from the neck of the cow is used in stews because, like brisket, it is very suitable for low and slow preparation.

A chuck roast also has a better distribution of the fat compared to a brisket. This gives you more leeway, and you do not have to worry about the meat getting dry.

When you buy the meat, pay close attention to the thickness of the piece. You should definitely go for 5 to 6 cm (2 to 2.5 inches) thick. This gives the meat ample time to warm up. Pay attention to the amount of inter- and intra-muscular fat. 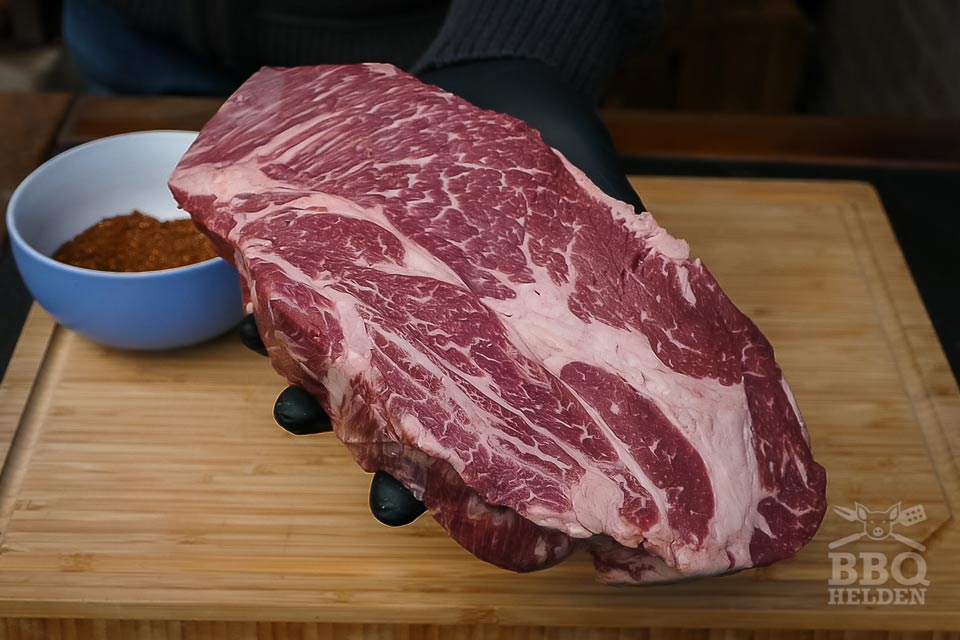 That fat will melt during the cook and provide the most flavor and juiciness in the meat. Thicker pieces of fat are allowed, and cannot be avoided, but you want as many thin lines of fat as possible to run through. This piece was 1.5 kilos (3.5lbs) and at least 5 centimeters (2 inches) thick. You should not accept thinner. Thicker is always allowed.

Here and there you see some thicker pieces of fat. This fat will melt during the barbecue, and the applied rub will be washed away. Anything more than a few millimeters can, therefore, be removed. This fat is of no use to you. You can leave a thin layer because that mixes with the rub, and makes for a firmer crust.

After cutting away the thick pieces of fat, the meat may have some loose pieces of meat. If this is the case, you must tie it up with some butcher’s twine. We were lucky that we had a beautiful compact piece of meat. 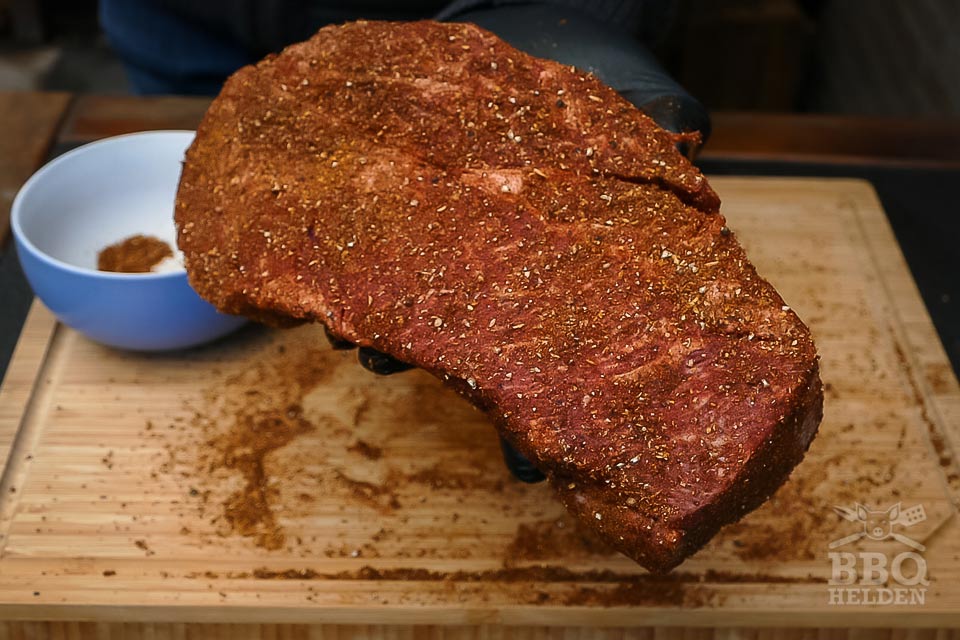 Mix the ingredients for the dry rub in a bowl. Sprinkle the rub in an even layer over the meat. We are going here for a Texas-style basic rub. But of course, you are free to use your own taste or use a purchased rub.

The lower the boiler temperature, the better, but somewhere between 120 and 150°C (250 to 300F) is excellent. Stick some cubes of smoke wood between the briquettes or charcoal. Any kind of fruitwood is right, but this meat can also have a more robust smoky flavor like Hickory or Oak.

Place the meat on the cooler side of the barbecue on the grid, insert a food probe into the meat, and close the lid. We use a kamado for this cook, but it also works on an ordinary kettle barbecue. 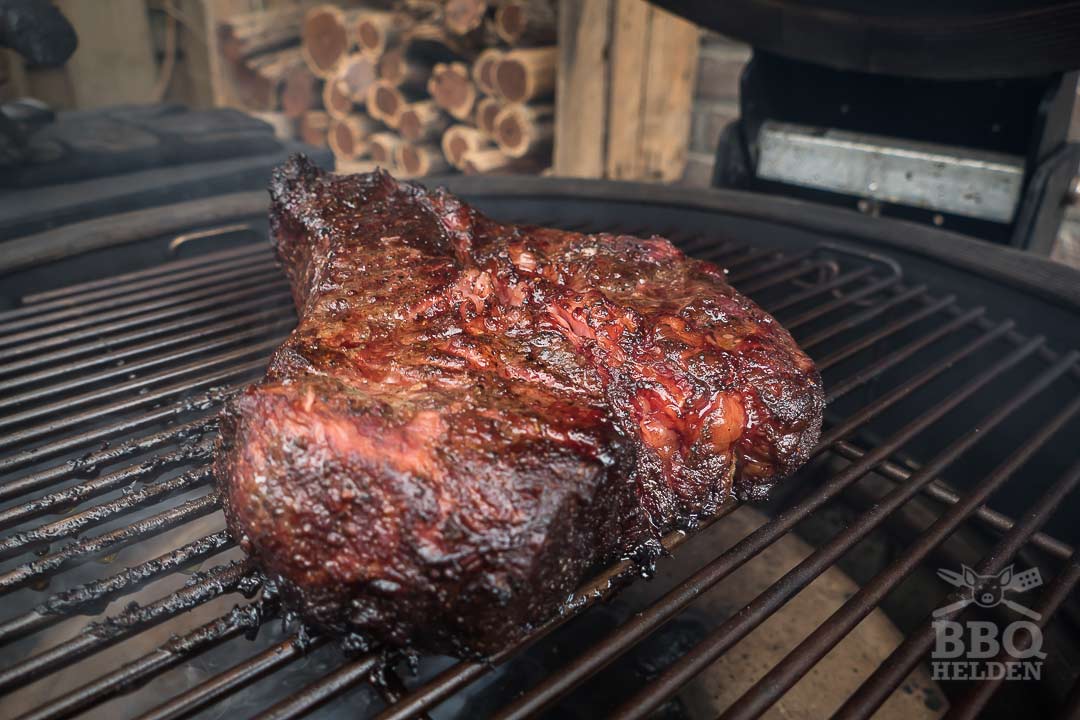 The meat is now smoked to a core temperature of about 65°C (150F), and a beautiful dark brown crust or bark has formed. This can take up to 4 hours. This can change when the thickness of the meat changes. 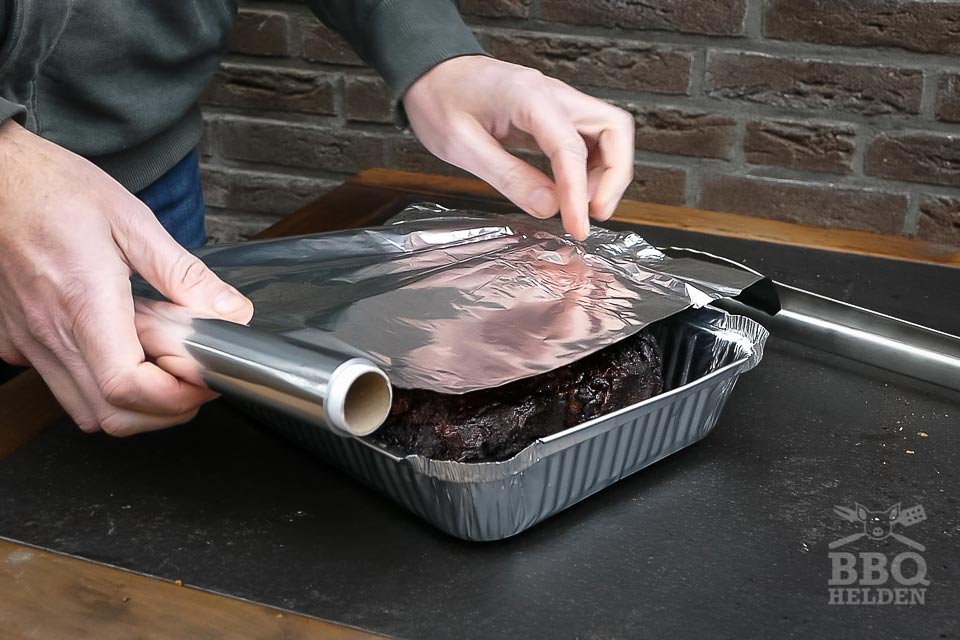 After smoking, we use the Texas Crutch. Then we wrap the meat with a double layer of aluminum foil to skip the so-called stall. The stall, or the zone, is a bizarre moment when the core temperature of the meat no longer rises for hours.

This is because the surface temperature decreases when the moisture that is expelled during the heating evaporates, and the meat cools down. The principle is the same as if you sweat after exercise. If you immediately put on a jacket, you will no longer cool down. This is also how the Texas Crutch works.

During packing, the collected moisture will also provide steam, making the meat soften even faster. That is a great additional advantage. If you want to add even more steam, pour some extra moisture into the package. This can be ordinary water, but also apple juice or apple cider.

There is a drawback to the Texas Crutch. You have already formed a nice crust during the first few hours of smoking. This crust or bark will become soft again by the steam. If you are unlucky, it will disappear if there is too much moisture in the package.

This can be somewhat prevented by wrapping the meat really tightly and handling the whole package carefully. After the Texas Crutch, you can make the bark a bit firmer again by putting the meat back on the barbecue for half an hour.

Now you put the whole package back on the barbecue. This part is also allowed in the oven. The only drawback is that you smell that pleasant bbq smell all over the house, and you continuously have hungry family members in the kitchen.

You let the meat lie to a core temperature of 90°C (195F), and then you check the meat for tenderness in different places. If the chuck roast is soft enough, you are basically done. Be careful not to go too far because then you have pulled beef. Also lovely, but that is not our goal.

Now unpack the meat and see if there is anything left of the crust. If it is still there, let the chuck roast rest for half an hour. This lets the juices redistribute through the meat. 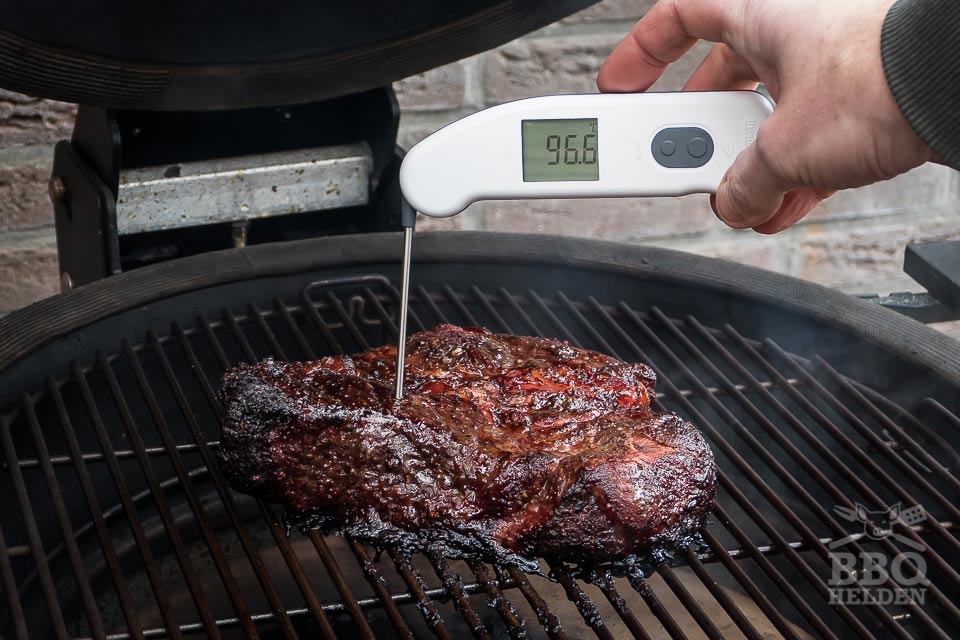 If the bark has really become too soft, you can put the meat back on the barbecue without the foil. The crust will then become a bit drier and grab a bit better on the meat.

Are you ready way too early, and the guests will arrive in a few hours? That may happen sometimes. Just leave the meat wrapped and wrap an extra towel around it. You put this package in a cooler. This way, the chuck roast stays warm for hours.

When cutting the chuck roast, we should pay close attention. This roast consists of 2 large muscle groups. These run at different angles to each other and will have to be separated first. Find what the direction of the muscles are and then look at which line the muscles go the other way. 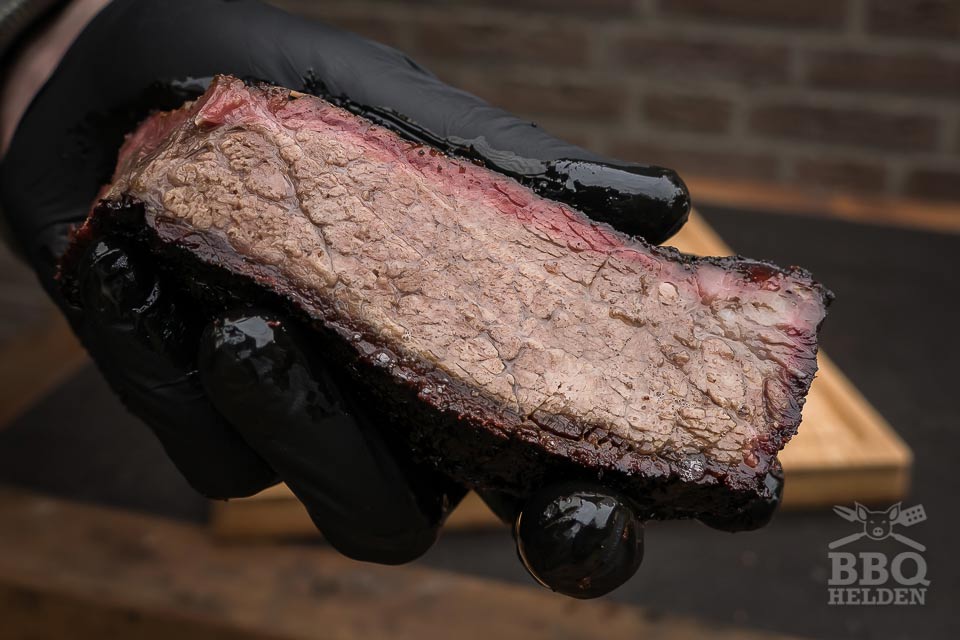 On this line, you cut the roast in half. Cut the pieces of grease that are not melted from both parts, and then you can cut both parts perpendicular to the muscle direction into slices of about half a centimeter (0,25 inch). 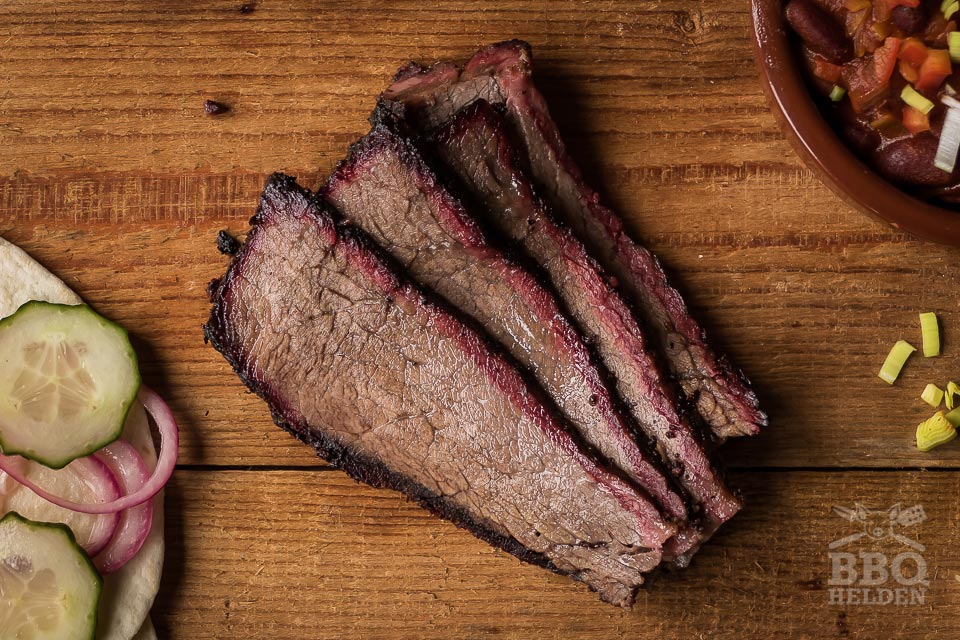 You have to know for yourself what you do with those slices. You can make great sandwiches with it or make some soft tortillas with some sweet and sour cucumber and onion. A whole chuck roast is a beautiful piece of meat to feed a large group of people.