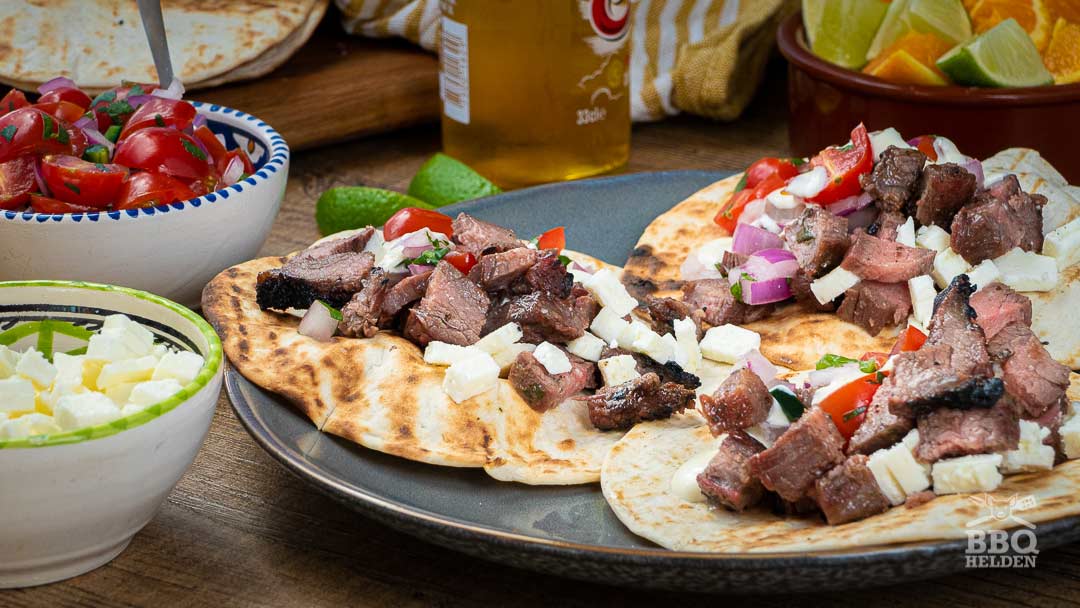 We have seen Carne Asada on social media for years, and on all the cooking programs we watch on TV. Carne Asada is small pieces of grilled beef that are often served on a small tortilla with some fresh vegetables. And it looks great every time.

Yet it took a very long time before we made Carne asada ourselves. This is mainly due to the very long list of recipes that we have to make “one more time”. Funnily enough, we make up many things that end up on the website a day or two before we start making them, and we don’t even get to the to-do list. 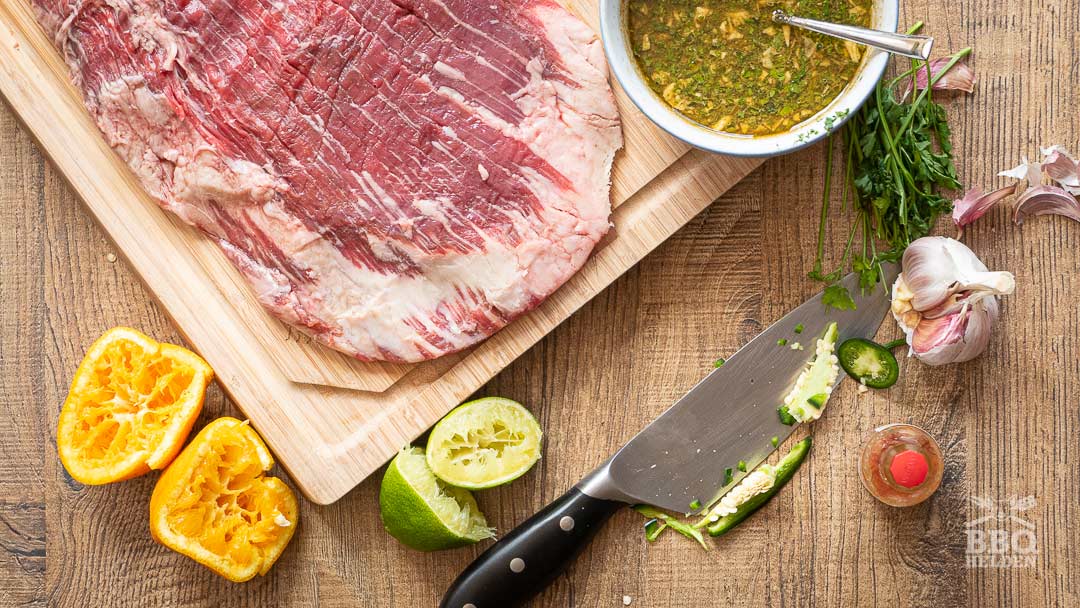 Carne Asada is a Mexican dish that means roasted meat in Spanish. It is often eaten as a snack on the street in Mexico, and then you see it wrapped in small tortillas. We’ve never been to Mexico, but that’s what we see on the Food Network. And you have to believe that, right?

Traditionally, they use flank steak for this dish. Flank steak is a steak from the cow’s flank (duh) with a long coarse thread. The meat itself has a great beef flavour and is quite tough because it is confirmed working meat. Every time the cow moves, it uses the muscles in its flank.

And yet, this meat can become really tender mainly because you can cut it so that the long muscles are cut into pieces. The marinade we use also has a large share. This marinade is quite acidic due to the lime and orange juice. The acid breaks down the connective tissue, making the meat more tender. 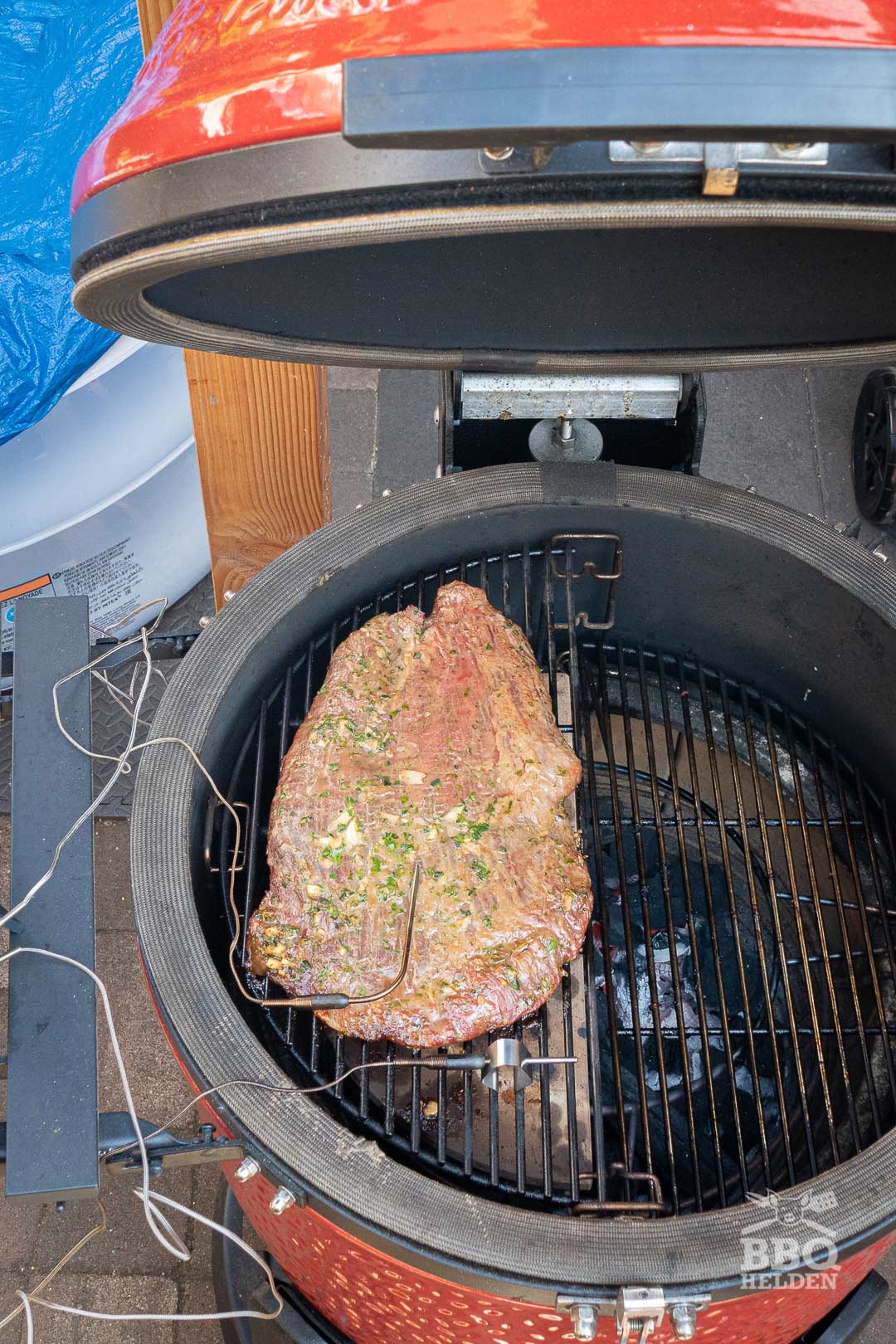 Officially you have to grill Carne asada, but this bavette is nice and thick. If we would only grill it, there is a good chance that the outside will sear too much while the inside is not yet cooked. That is why we divide our Kamado Joe with an indirect and a direct part with the divide and conquer system.

On the left, we have a plate setter with the grid above it. We put the other grid on the lowest setting, with little distance to the glowing coals. Because we don’t feel like keeping an eye on the meat every time, we use a digital core thermometer. Of course, it’s not cool, and a real pitmaster cooks by feel, but we prefer to swim in our pool in this weather. 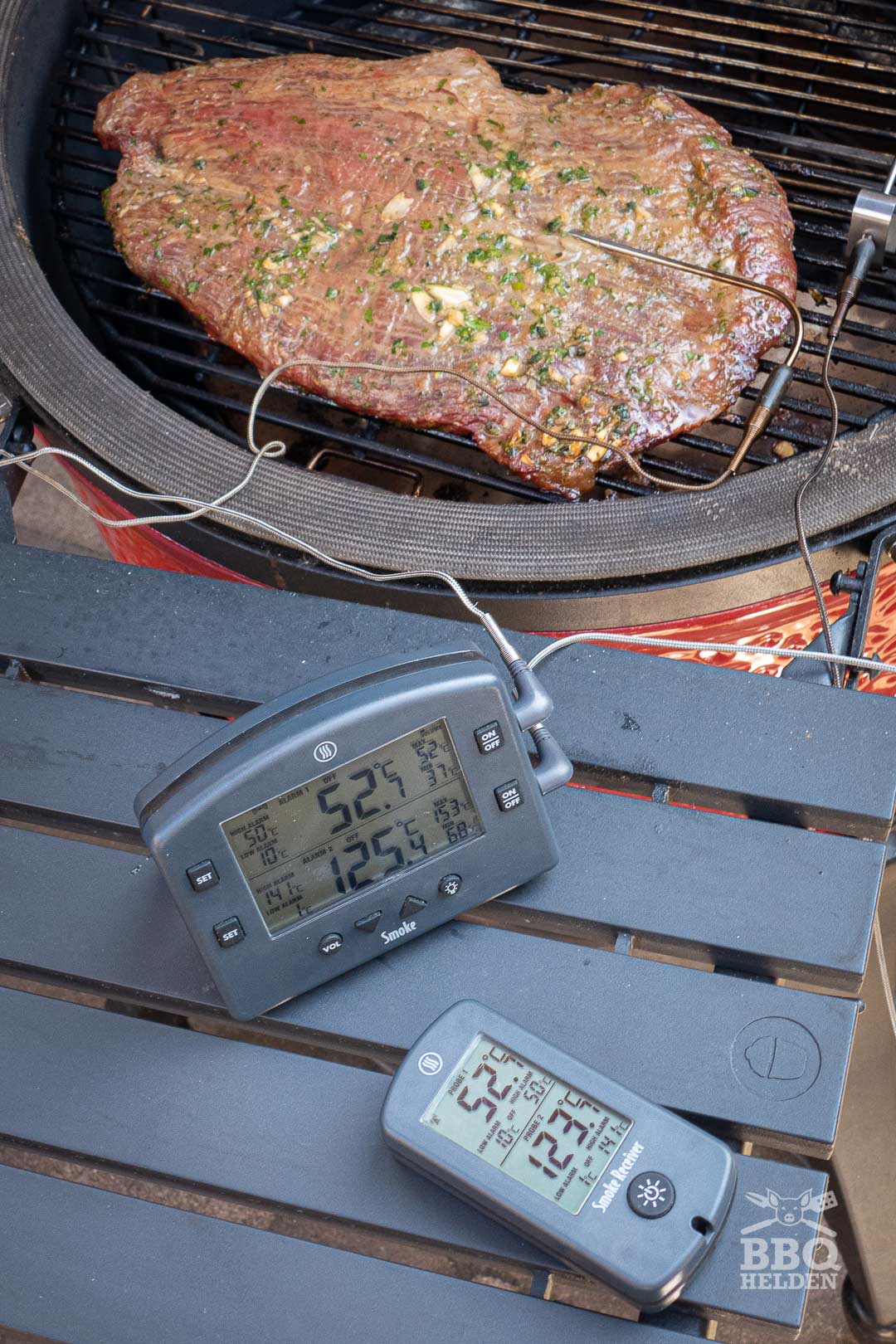 After 2 hours at 120°C (248F), our Smoke thermometer tells exactly that the meat is 50°C. After that, we notice that the battery of the camera is empty, and we first have to dry our feet before we can run inside for a full battery. Seven minutes later, the flank steak is again 52°C. Those are the problems of food bloggers that you don’t hear much about. 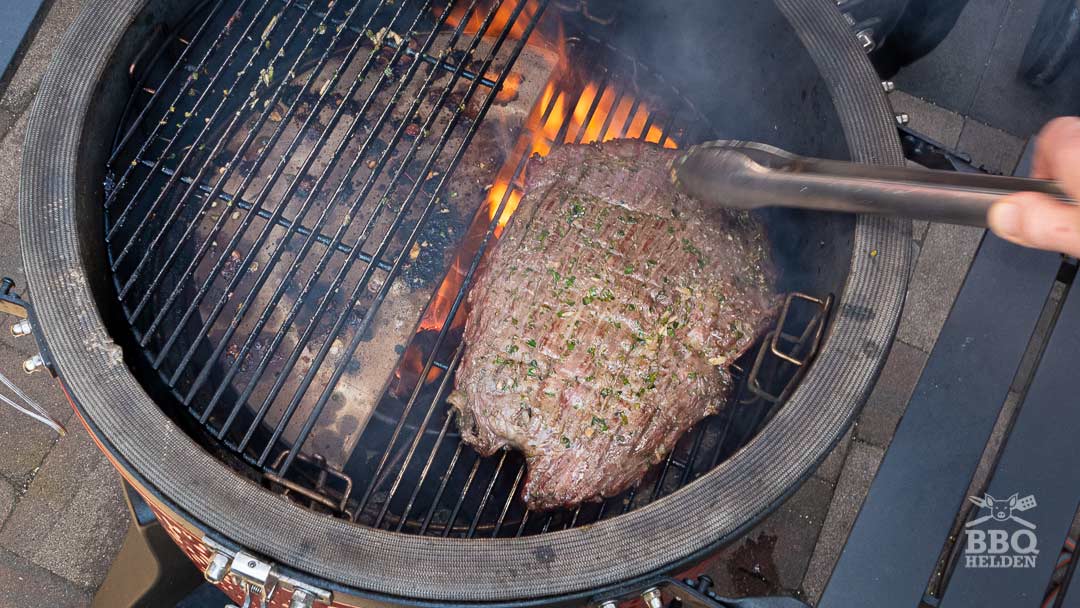 We open the bottom air slide and wait for the rest of the charcoal to glow. Then we grill the steak on both sides. Keep a close eye on the meat. Now is not the time to get back into the pool. Now you really have to get to work. You leave the meat until you see some dark edges but short enough not to burn the meat. So very exciting work. 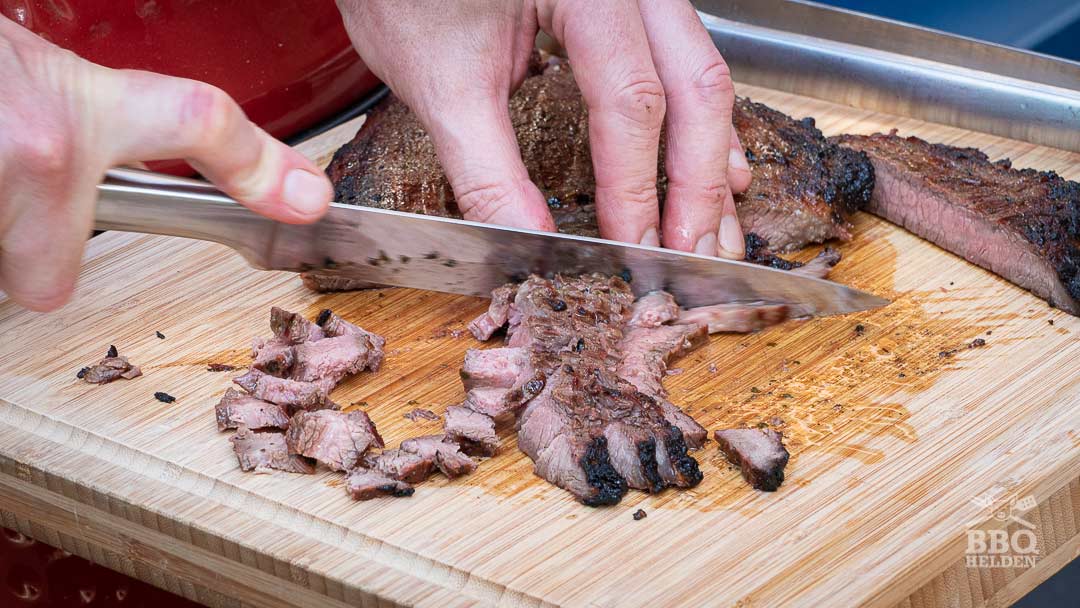 The flank steak has rested long enough between the slow cook and the sear, so that is no longer necessary. Now comes the trick that we make the bavette more tender by cutting it. First, we cut the meat into thin strips perpendicular to the muscles you can see very well. Then we cut the strips into small cubes.

Meanwhile, you’ve put someone to work grilling the tortillas. It’s not that difficult, you shouldn’t worry about that as a BBQ hero. You’ve worked hard enough already, haven’t you? 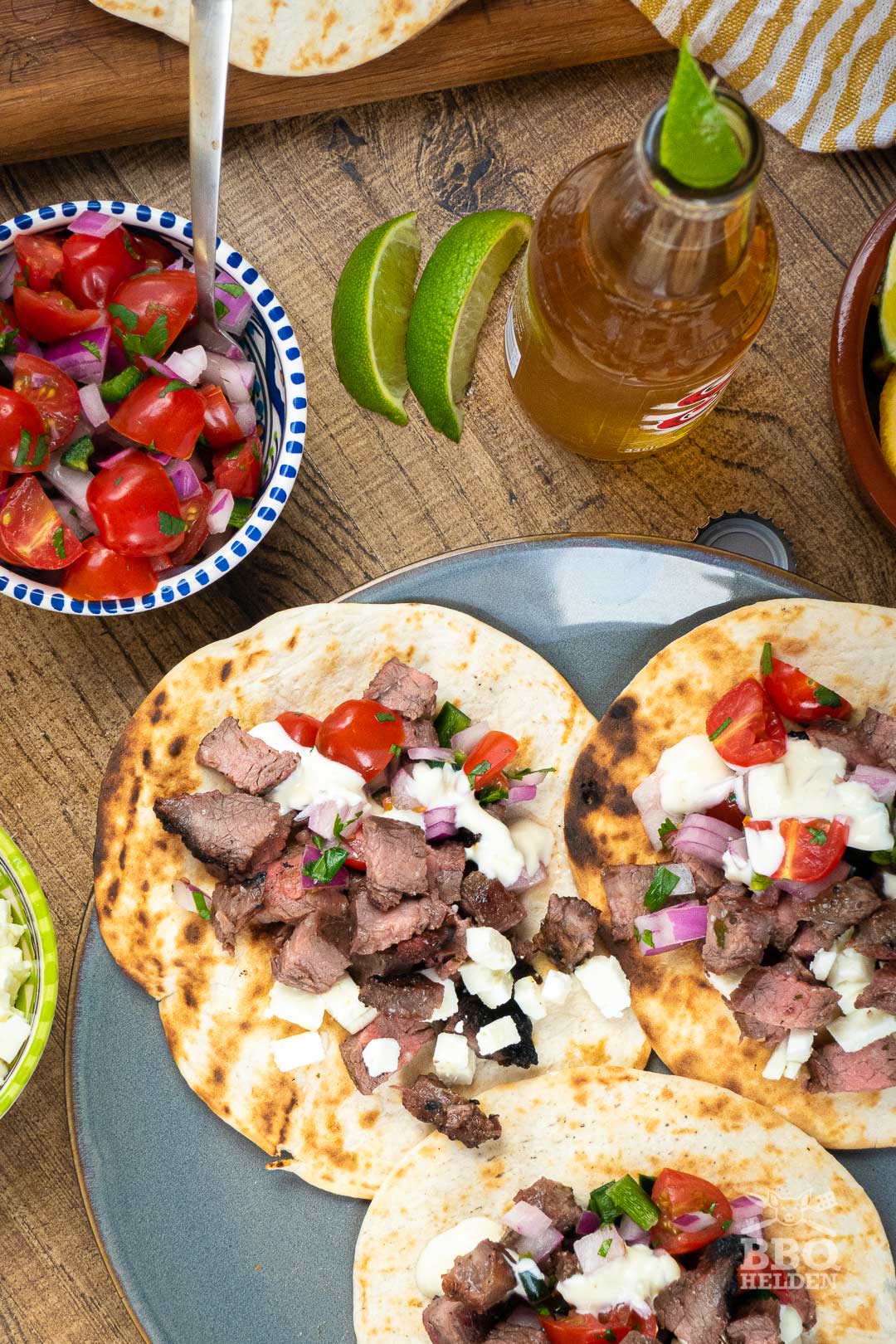 This is our Carne asada and they are amazing. We serve them with pico de gallo and a nice sour cream sauce. Try the recipe and let us know how you like it. Or better! Take a photo and post it on Instagram. Tag @bbq.heroes and @kamadojoe so we can see what you made.

For the sour cream sauce