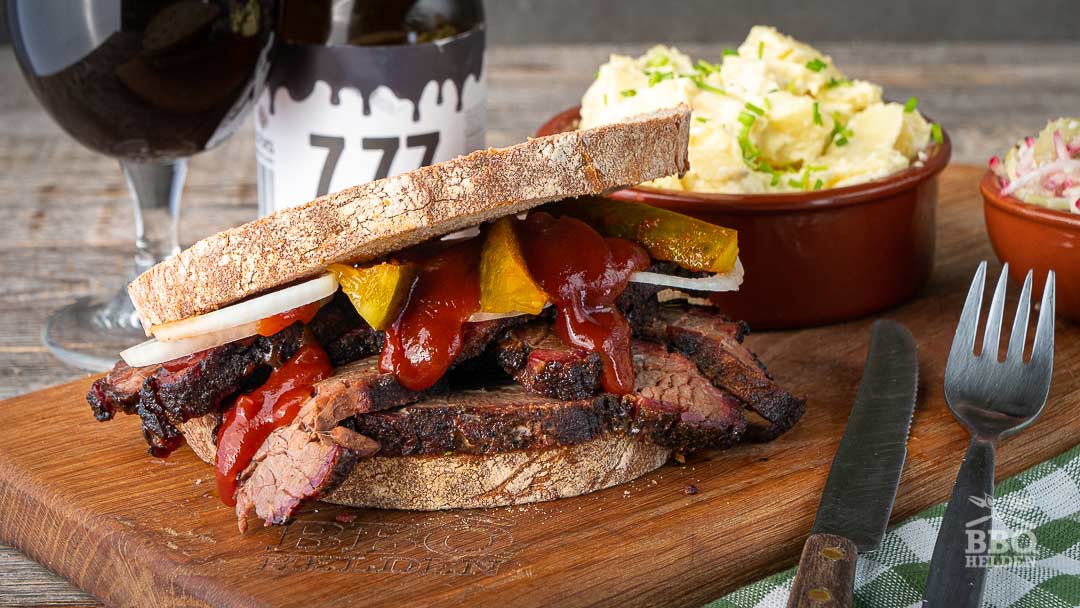 Preparing a brisket is a real test for the novice barbecuer and an expensive hobby if you want to try it. That’s why it’s good to know that you don’t always have to buy a whole brisket to enjoy this delicious piece of meat.

In the Netherlands, you can find a cut called a brisket ear. It’s a cut that sits on top of the whole brisket. In the United States, this cut is called the point. The point is the fatter part of the brisket and, therefore, easier to prepare. We have made a few delicious sandwiches from this cut. 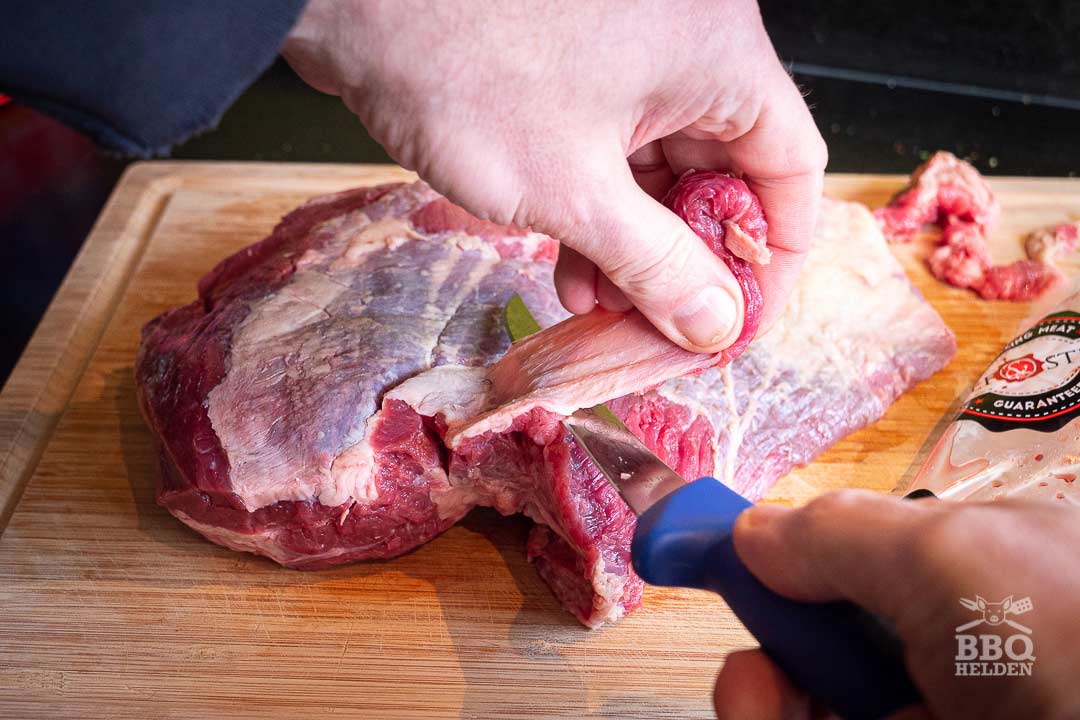 Sometimes there is a layer of fat on top of the point that you can remove. But in any case, you want to cut away some silverskin. This membrane does not taste like much by itself and only stops the smoke and the applied dry rub from penetrating the meat.

Use a flexible filleting knife to insert under the silverskin, after which you can lift it and carefully cut it free from the meat. Of course, you try to leave as much meat as possible. This does not always work, but practice makes perfect. 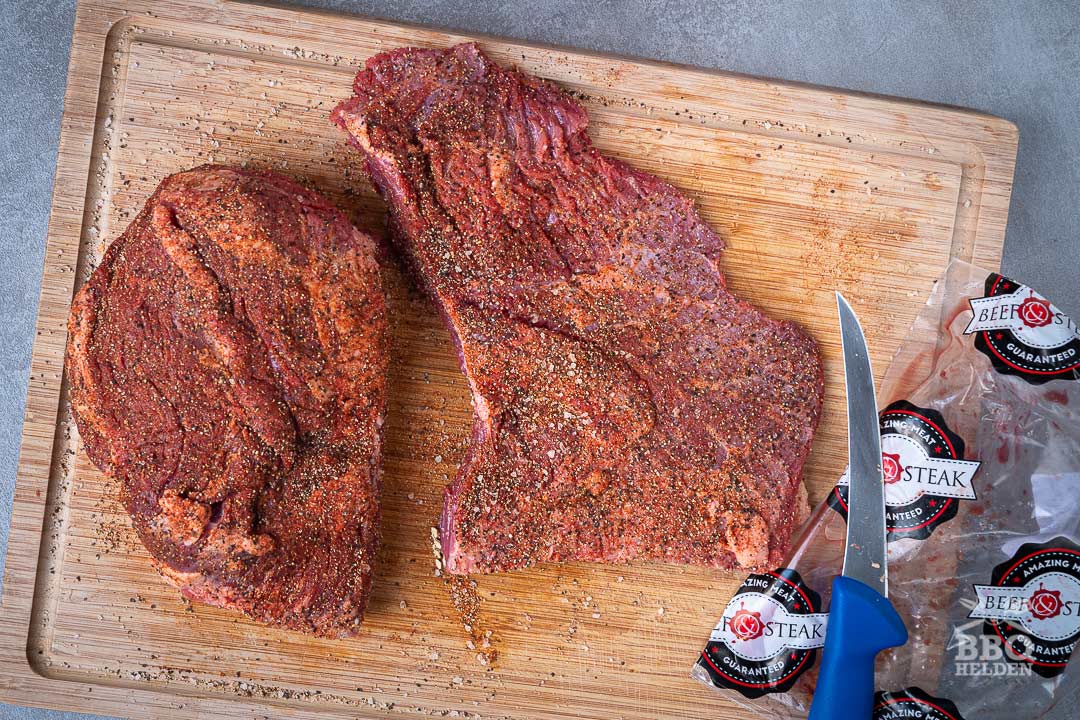 We split the meat into two because there are also burnt ends on the menu. Burnt ends are caramelized pieces of brisket cut from the part that cannot be cut into slices because it is too thin. The other part is thick enough to cover at least four big stacked sandwiches. 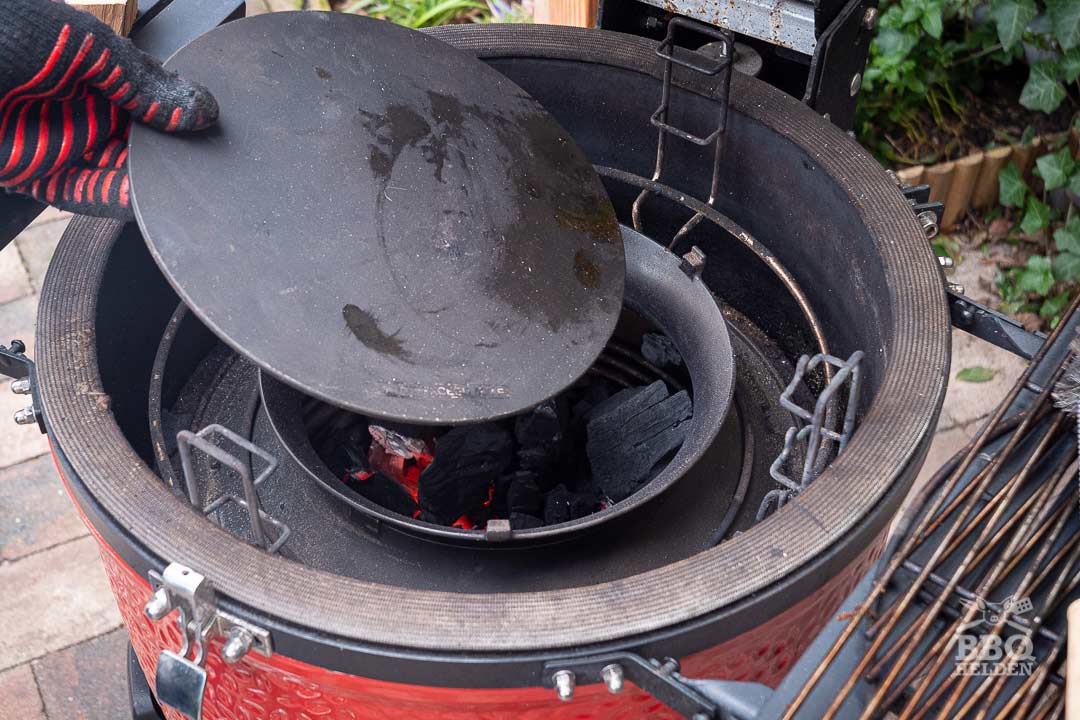 We use the SloRoller in our Kamado Joe for the low and slow preparation. We had to get used to the SloRoller, but we use it more and more. This accessory, which you get standard with the Kamado Joe, not only ensures that the oxygen and smoke are perfectly distributed in the kettle, but also that the temperature remains more stable. Even if you open the grill occasionally to take a peek. Because let’s face it, you’re going to do that anyway. 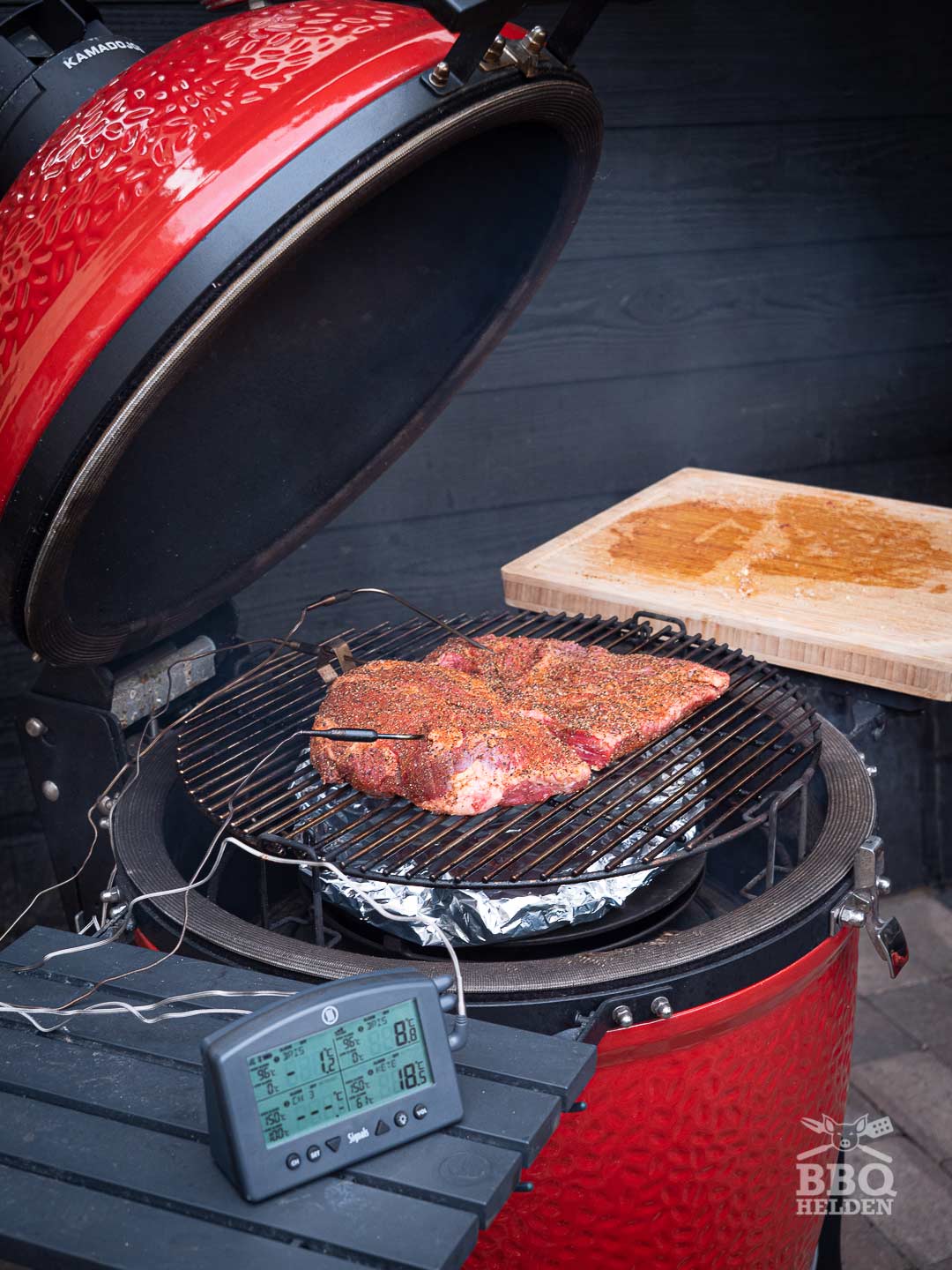 We don’t want to open the lid more often than necessary, so we place a probe for the thermometer in each piece of brisket. This time we use the Signals from Thermowork, which has space for four probes. We insert two probes into the meat, and another probe controls the temperature in the kettle. Then the Signals gives the Billows blower a signal when the temperature gets too low.

With the Billows as a controller, we can ignore the grill without the temperature in the kettle changing. The other advantage is that we can increase the temperature very quickly by simply setting the Signals to 180ºC (356F) for the second part of the preparation without touching the grill. 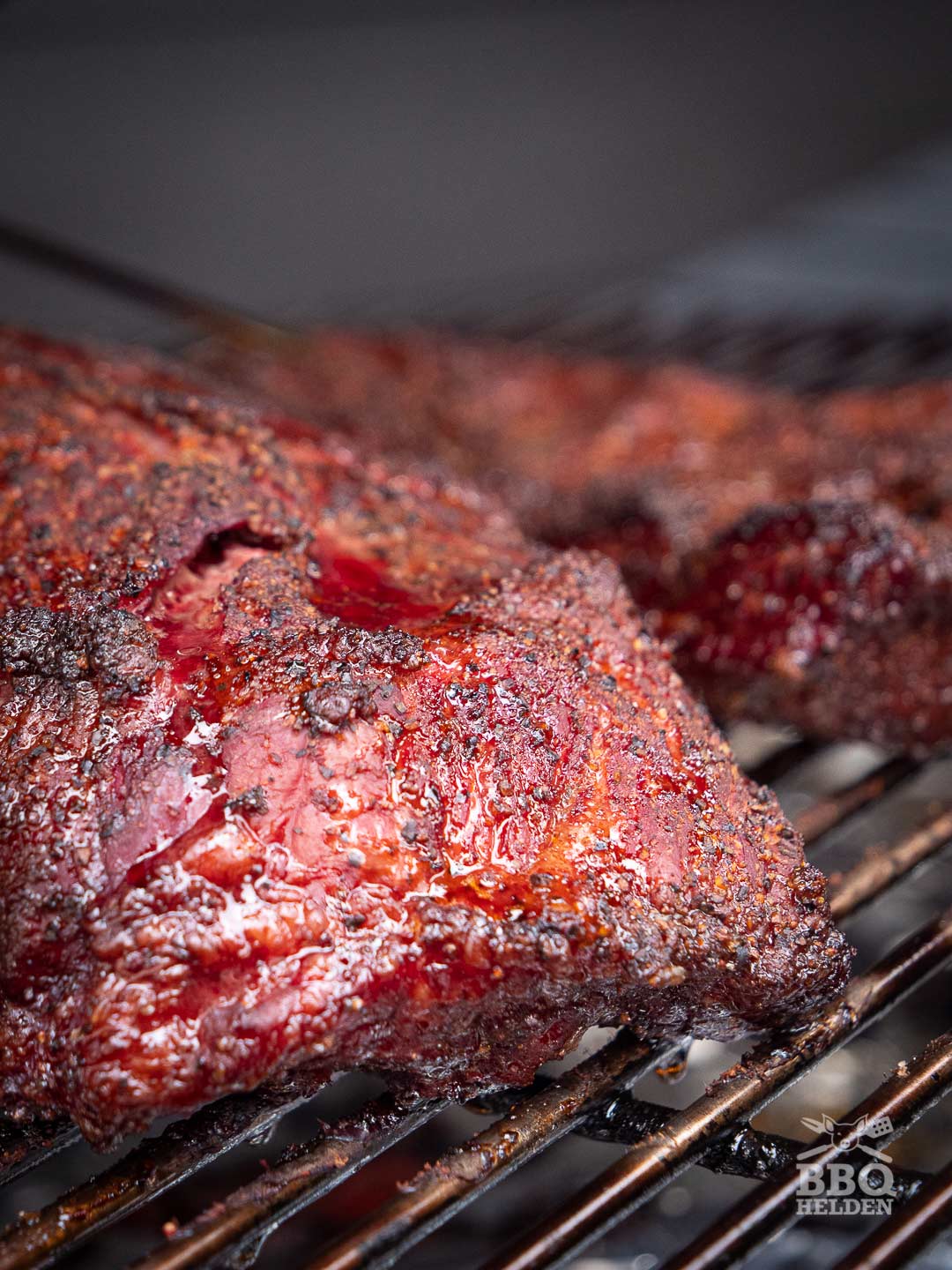 Which smoke for a good smoke taste

You only need a light smoke to smoke brisket or any type of meat. The gasses that flavour the smoke are not the thick grey carbonaceous clouds. That smoke only creates an ash taste you absolutely do not want on your meat. So we placed one chunk of cherry smoke wood directly on top of the glowing charcoal and a second just next to the glowing core. This way, you get a constant flow of so-called blue smoke.

And then you get a delicious smoky taste belonging to authentic barbecue, and you get a beautiful red-brown colour. In this case, we used a combination of beech and cherry wood. Cherry wood, in particular, as you can see, gives a lovely colour on and in the meat.

You’ve probably heard stories about how long it can take to prepare brisket. This brisket was not longer than 5 hours on the grill. We cooked it at a relatively high temperature of first 150ºC (302F) and then, in the second stage, even 180ºC (356F). You can officially no longer call that low and slow but hot and fast. This is, therefore, only possible with good quality meat with a high concentration of intramuscular fat, such as a brisket point. 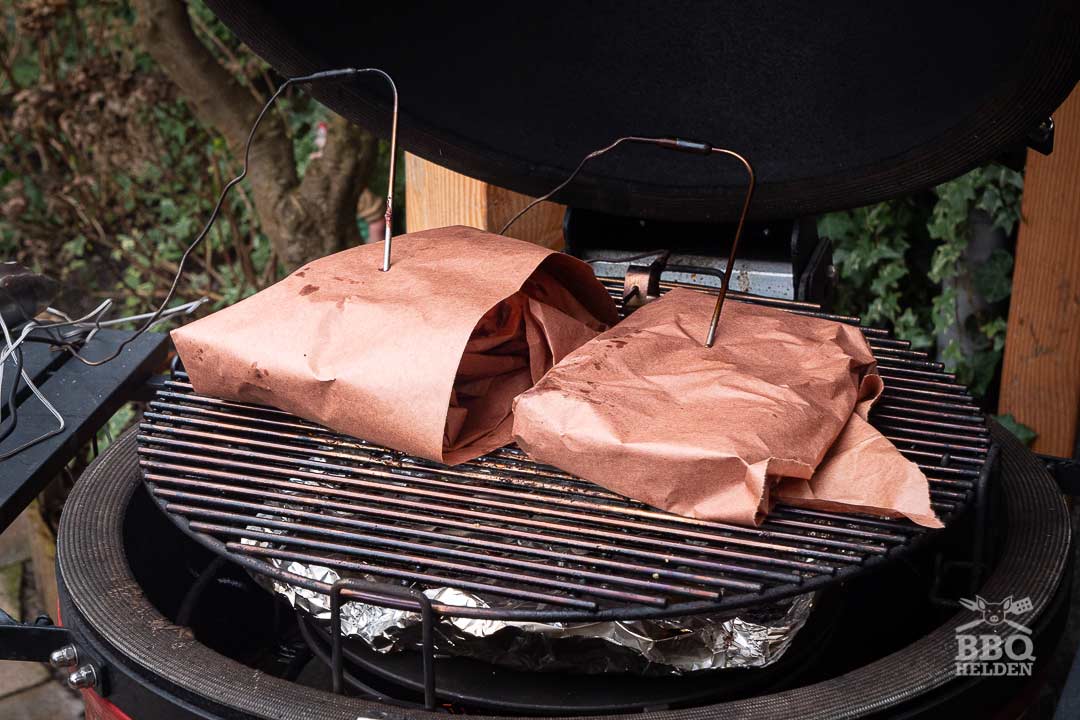 When do you wrap a brisket?

We can wrap the meat when the applied dry rub has formed a crust. The meat will eventually drive out moisture, causing the brisket’s surface to become moist. This will cool the surface as air flows through the grill and around the meat. Now the brisket will no longer rise in temperature until the surface is dry again. This can take hours.

By wrapping the brisket, air will no longer flow past it, and the core temperature will continue to rise. They call the wrapping of barbecue meat while cooking the Texas Crutch. In this case, we use butcher’s paper to wrap the brisket, ensuring that the steam is not trapped in the packaging. Due to this steam, there is a good chance that the crust of the dry rub will remain soft and wash away with the moisture in the packaging.

After wrapping, nothing really can go wrong. You just have to wait until the brisket is tender. That is around a core temperature of about 96ºC (204F). Don’t rely too much on this temperature. Some briskets are only tender enough at a higher temperature—others already at 93ºC (199F). Simply pierce the foil or butcher’s paper with a separate probe to check how far the meat is. 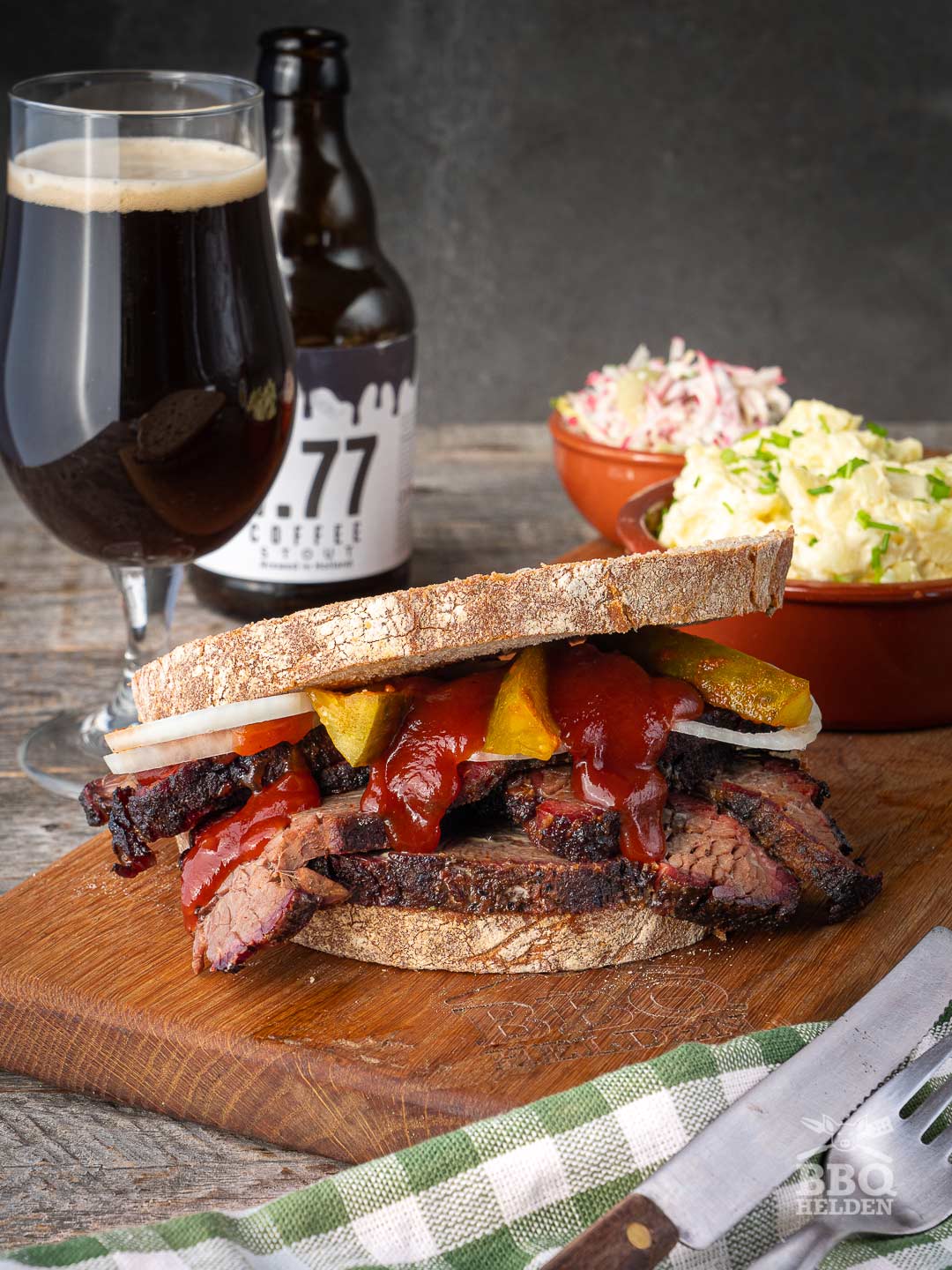 This is our brisket point sandwich. We have cut a nice loaf of bread into thick slices for the bread, but if you prefer everything on a white burger bun, you can, of course, decide that yourself.

If you will make this sandwich, let us know in the comments below.

For the bbq sauce