Beef Wellington from the grill The Beef Wellington is a perfect recipe to make on the Kamado Joe because you use different cooking techniques to prepare it. We range from the extreme heat you need to grill the tenderloin to a low and stable temperature to cook the puff pastry indirectly. 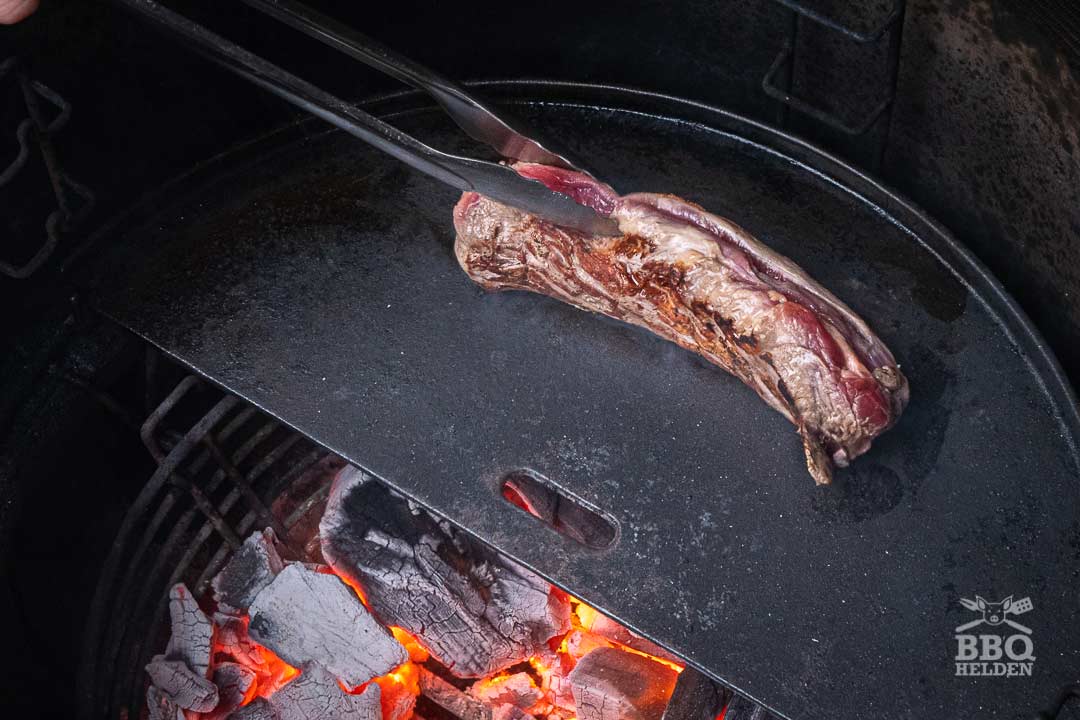 For this recipe, you need a beef tenderloin with almost the same thickness from front to back. Then the Beef Wellington gets the proper shape, and the meat cooks evenly. We salt the tenderloin with sea salt 45 minutes before grilling it. This will give the salt enough time to soak into the meat to flavour the tenderloin.

With a recipe like Beef Wellington, you discover how versatile your kamado is. We place the half-moon grill plate in the lowest position briefly on the glowing charcoal. We want to grill the outside of the tenderloin without overcooking the inside.

Also, make sure that you change the position of the tenderloin every time you flip it. Then you know for sure that the grill plate is at its hottest. 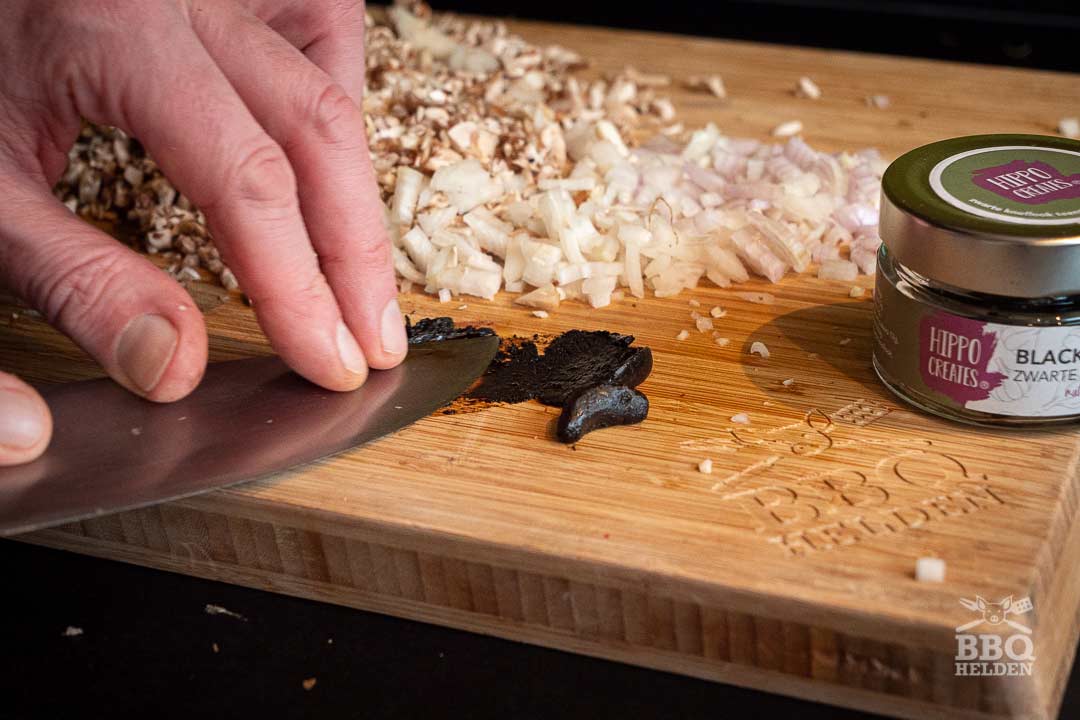 The meat is then covered with a layer of shallots and mushrooms. They call it duxelles. The origin is probably French, but not much else is known. We make this duxelles with chestnut mushrooms, thyme, tarragon and black garlic.

Beef tenderloin does not have a strong taste by itself, so it could use some help. The taste of black garlic is unique. It has a taste that leans more towards raisin and does not have such a strong smell as fresh garlic. 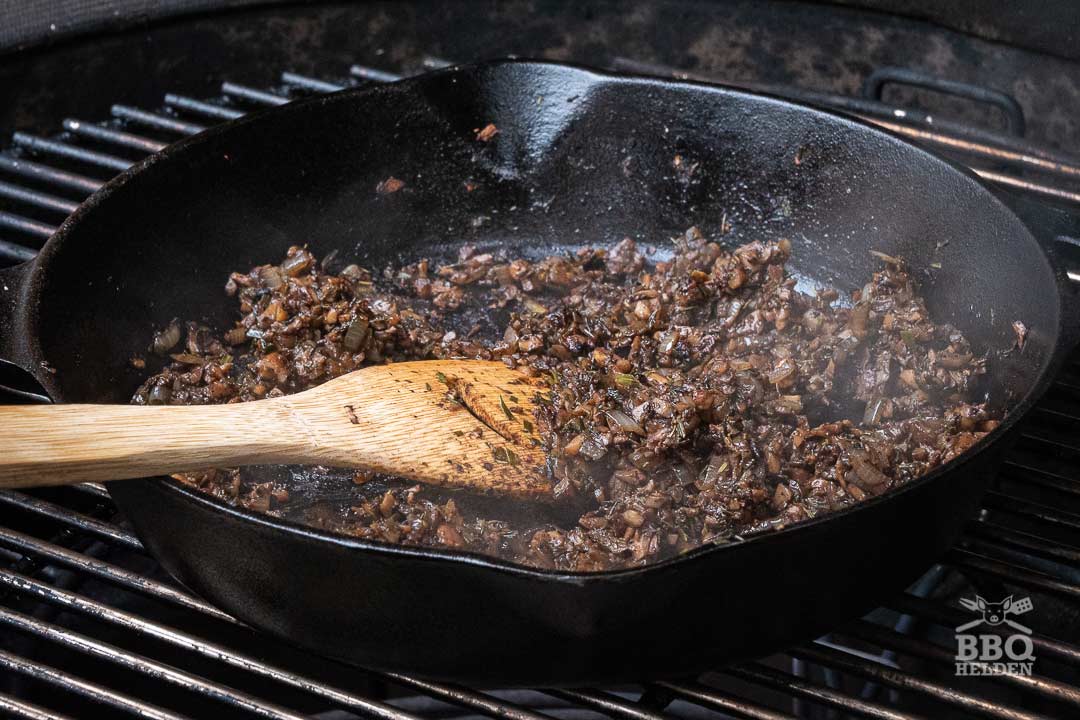 The big trick to making Beef Wellington is ensuring all the ingredients are as dry as possible. So fry the duxelles in just enough butter to keep them from burning and long enough until they just don’t start to cake in the pan. Keep stirring until you see the mushrooms sticking to the bottom. Then take the pan off the heat. 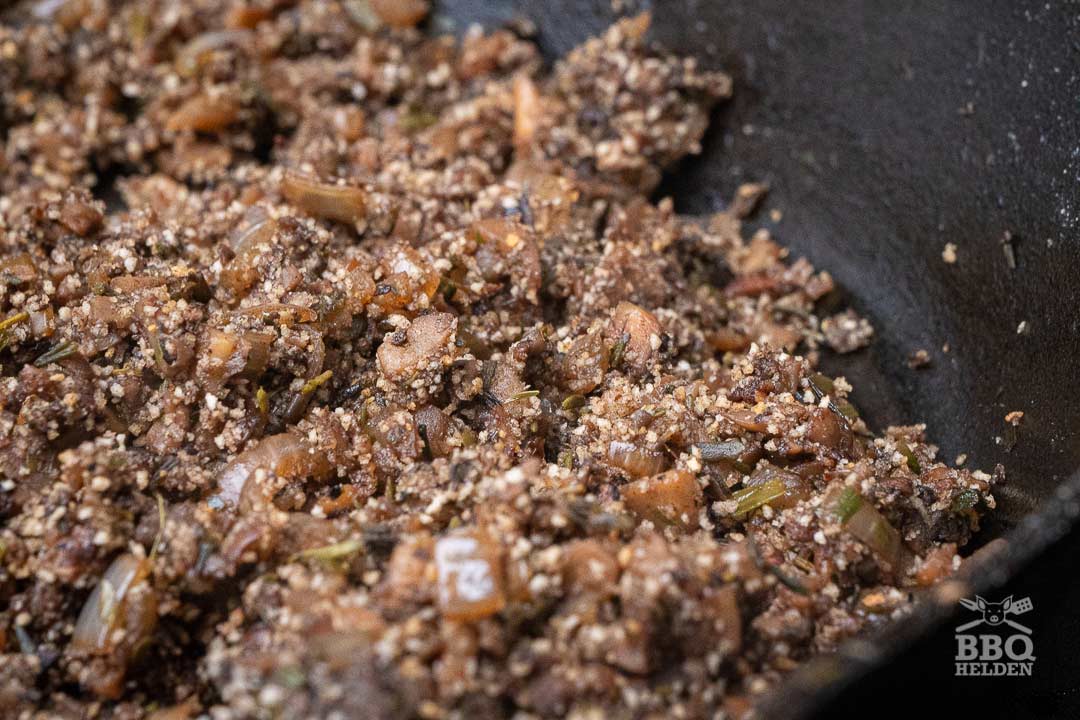 To get the duxelles even drier, we sprinkle breadcrumbs over them. Stir this in and keep adding them until you see that no more moisture is being absorbed and the breadcrumbs remain dry. 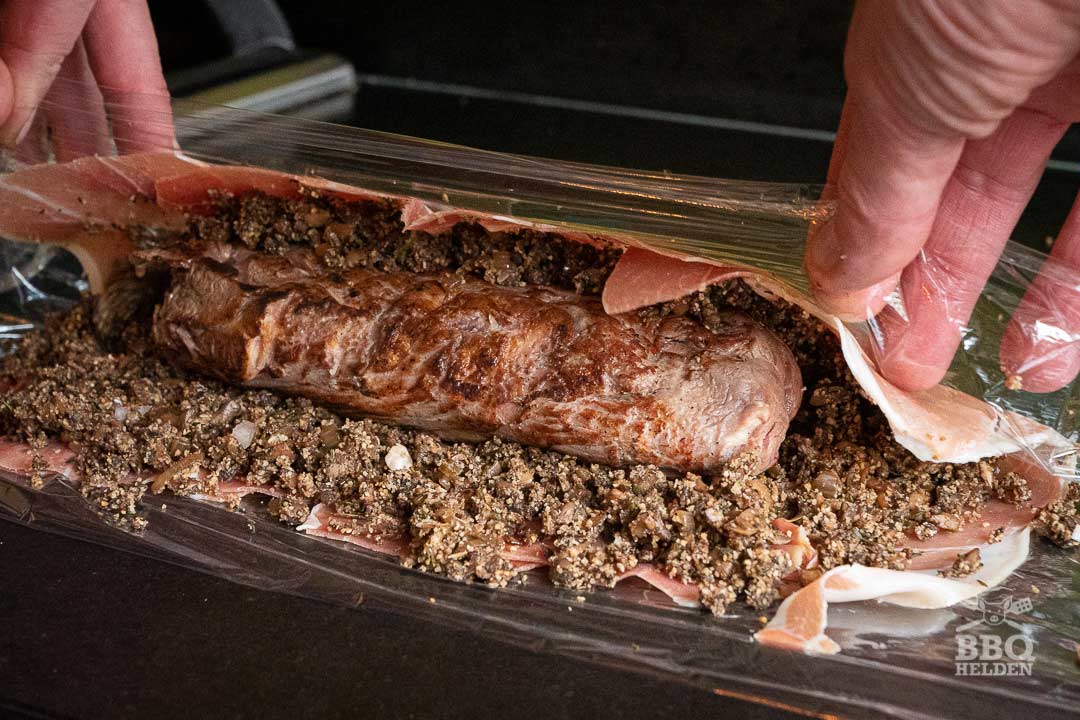 To get a lovely tight Beef Wellington, use cling film. And two layers. Place the serrano ham first and the duxelles on top of the ham. We pat the tenderloin dry with kitchen paper before placing it on the duxelles.

Then, roll the ham around the tenderloin as you would making a joint. You twist the cling film tightly at both ends, and then the entire package goes into the fridge to stiffen. 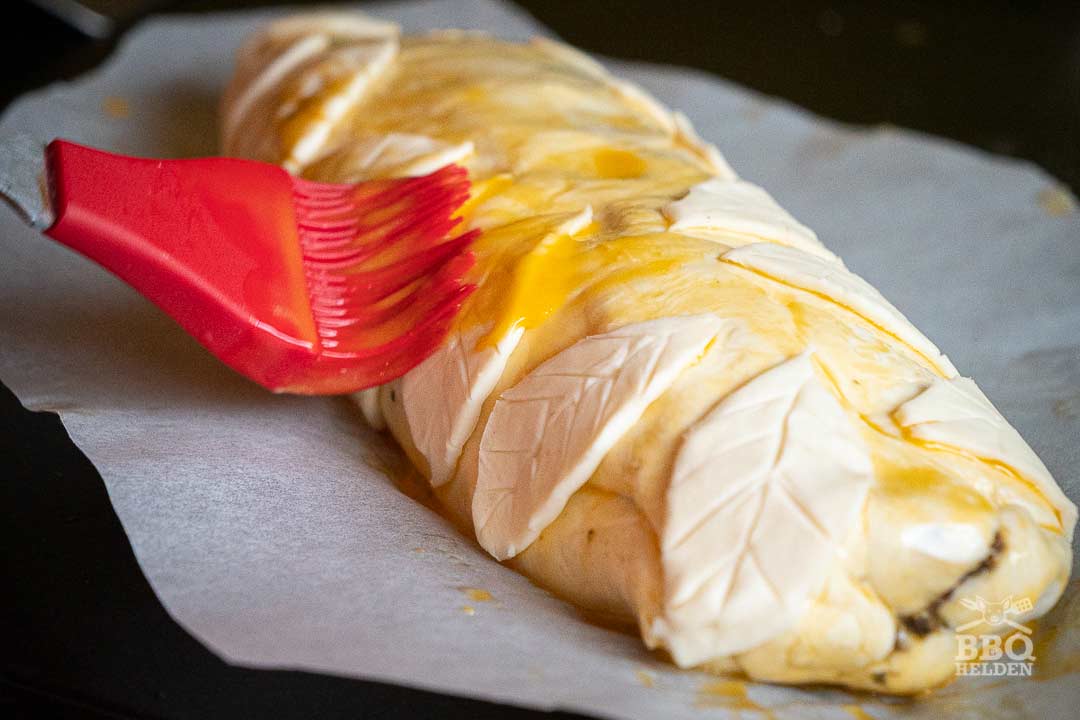 You use the same technique with the puff pastry. We use fresh puff pastry sheets we’ve found at the supermarket. Those are nice big sheets that you can use right away. The sheet must be just large enough so you can fold it around the tenderloin. From the leftover pastry, we cut some lovely leaves. If you are more creative yourself, you can, of course, come up with something else.

Stick the leaves on the Wellington with some egg yolk and brush the same egg yolk all over the bread. The egg yolk will ensure that the Wellington turns a nice golden brown. If you don’t do this, there is a chance that the meat is already perfectly medium-rare and the puff pastry already baked but still too pale.

To transport the Beef Wellington, we put it on a sheet of baking paper. Feel free to try it differently, but we doubt whether the Wellington will end up on the pizza stone.

We set up our Kamado Joe as follows. We place the platesetters on the accessory rack. Above that are the grill grates and on top of that is the pizza stone. It’s the same setup we use when making pizza on the kamado. On the side of the bread, we insert the probe of our thermometer into the tenderloin. Cooking at temperature is the only way to know how cooked the meat is in the Beef Wellington.

We first set the thermometer to 50ºC (122F). Then we check what the colour of the puff pastry is. If it is still too pale, we could slightly increase the kamado’s temperature. That turned out unnecessary, so we baked the Wellington further to a core temperature of 55ºC (131F). 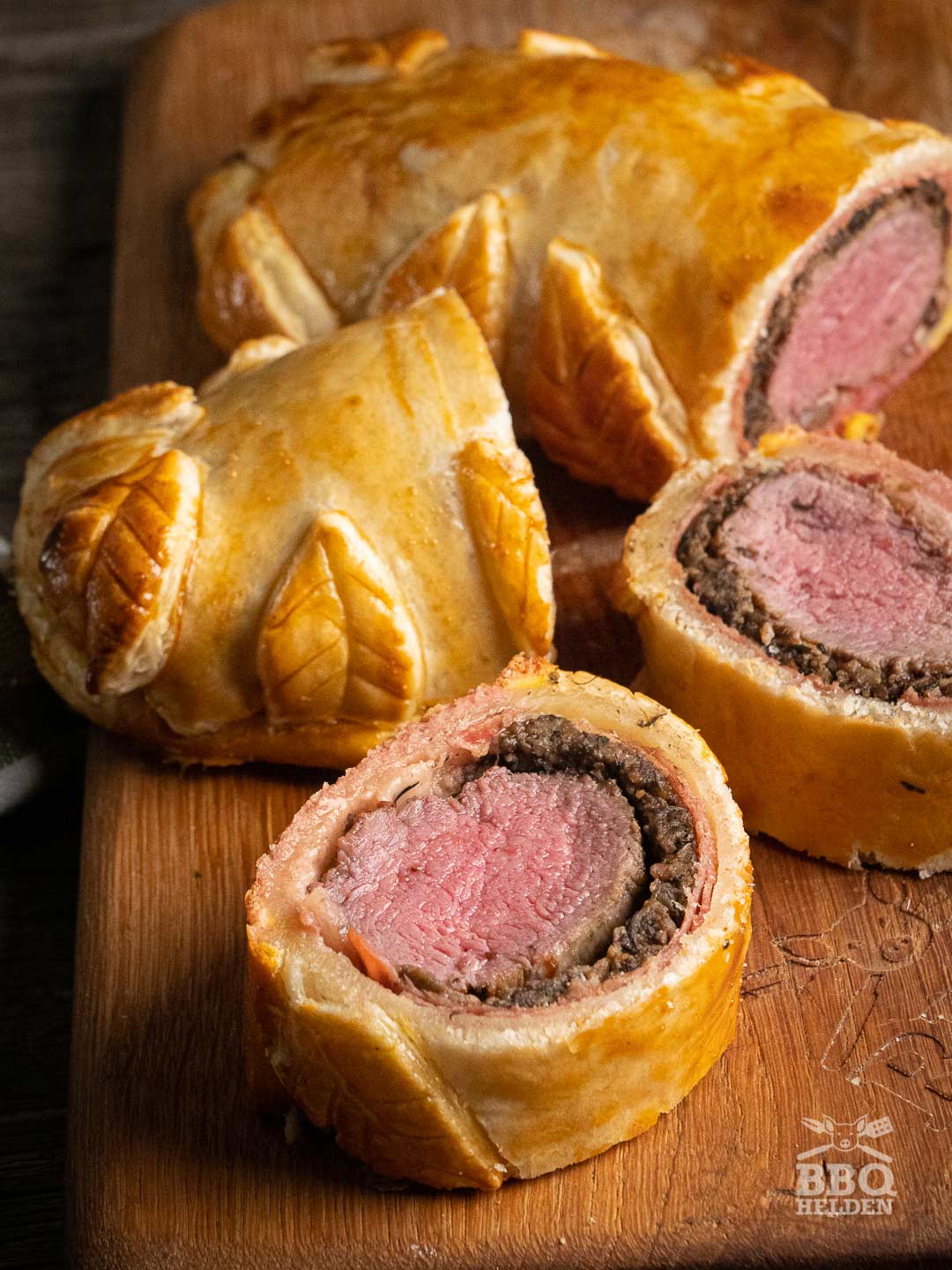 It’s always good to let your meat rest before slicing in, but with the Beef Wellington, it’s an absolute necessity. If you don’t do this, a lot of moisture will escape from the meat and ruin your beautiful puff pastry layer. After making the slices, you immediately lay them flat. Some moisture will always come out of the meat.

This is our Beef Wellington. Let us know in the comments below if you try making it too. Or better! Tag @bbq.heroes so we can see what you made.