Home How to Wrapping spareribs or not?

Wrapping spareribs or not? 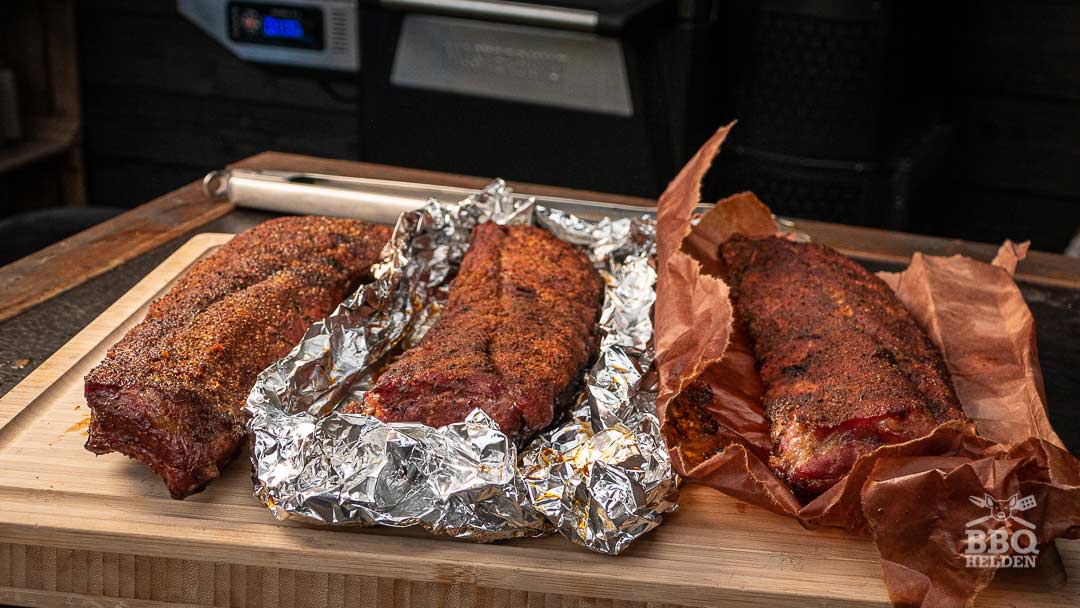 Many ways lead to tender spareribs, and no one is the best. But with which preparation gets the best spareribs? There is only one way to find out. You fill your smoker with pork ribs and prepare them in different ways. We did just that. For you. No problem. You’re welcome.

We bought six almost identical baby back ribs and prepared them in 2 different ways. Unwrapped and wrapped in aluminium foil and butcher paper with the Texas Crutch method. This way, we get three different spareribs that the neighbours and we could test.

Before we smoke the spareribs, they have to be prepared. First, we are going to get rid of the membrane that’s on the bone side of the meat. While cooking, this membrane becomes a kind of parchment that doesn’t taste good. Fortunately, you can easily remove that membrane. You press a dull dinner knife between the bone and the membrane and pull it up until you can get a finger under it. Then you pull it off the meat. This is the quickest way to do this. The easiest is to let somebody else do it. 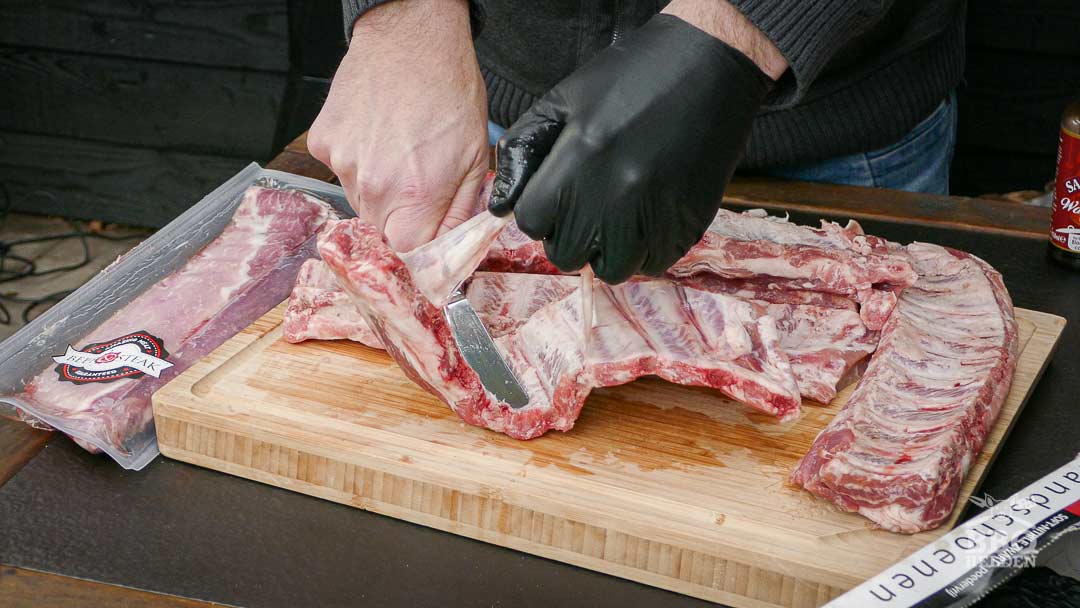 Then we splash the spareribs with a little Worcestershire sauce to which the dry rub can stick. You can also use mustard or olive oil, or Tabasco. We use Worcestershire. We can’t pronounce it, but we think the ribs will be just that little bit better. That can be just in our heads, of course. Maybe that is something for the next test.

We already mixed a great dry rub for spare ribs, so we sprinkle it over all ribs with an even layer. This dry rub provides not only a delicious taste but also the so-called bark. That is a delicious crust of dried herbs, pork fat and smoke. And because spareribs are so long and thin, you have a lot of bark. 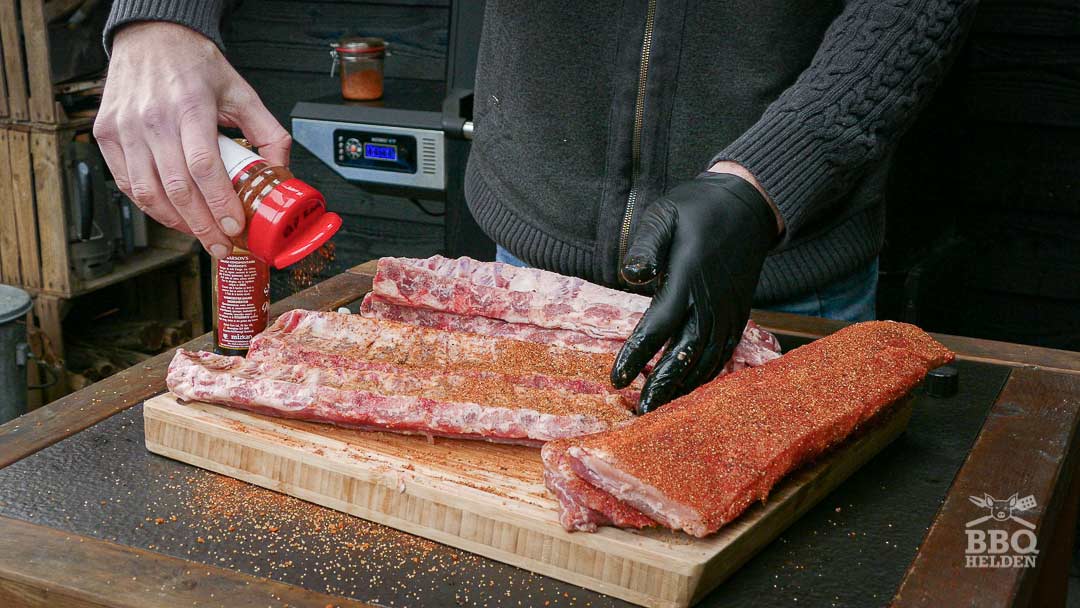 We are going to smoke the spareribs

The intention is that we all prepare the spare ribs at the same temperature and with the same amount of smoke. This can be done on any grill with a lid, but few grills fit six spareribs. You can place the spare ribs on their side in special racks, but then you still have the problem with the kettle’s heat distribution.

In a kamado, the temperature at the kettle’s edges will always be slightly higher because the heat is drawn upwards along the plate setter. In a kettle barbecue, the briquettes or charcoal are on one side of the kettle so that you have two zones and get indirect heat. This you always have heat differences in the kettle. 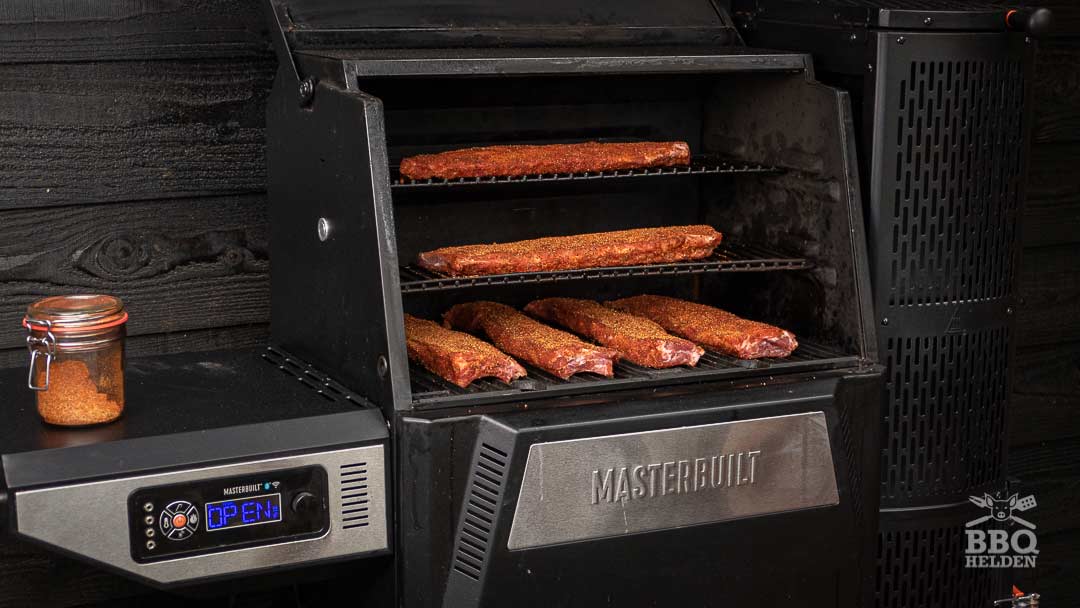 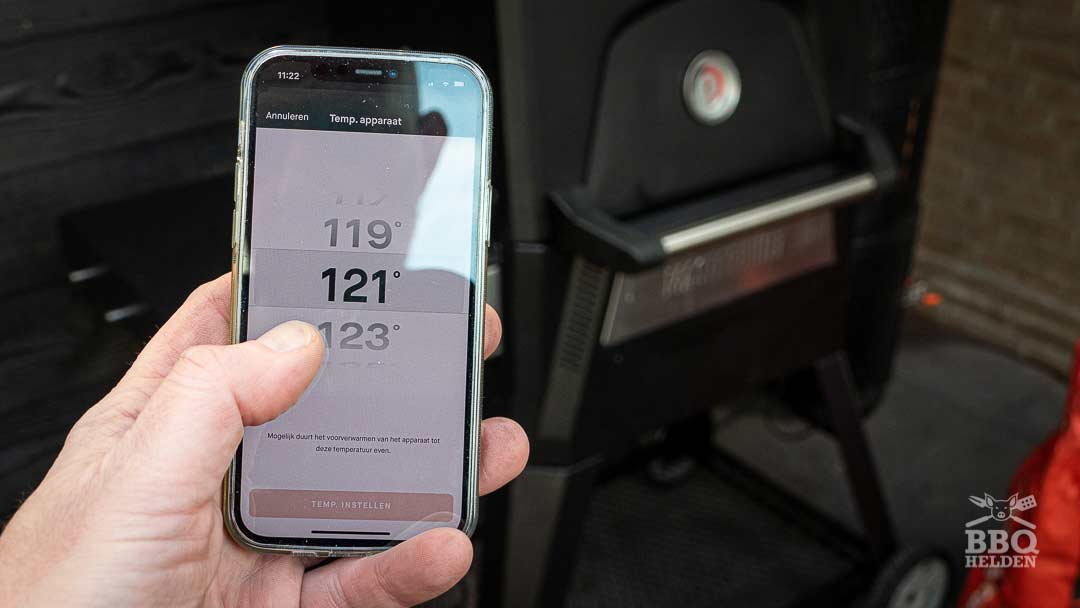 We set the temperature to 120°C (248F). In our opinion, that is the best temperature for smoking. Of course, it can be done at a lower temperature, but it only takes longer without real benefits. You can also do it at a higher temperature, but only if you wrap them. The dry rub on the non-wrapped spareribs will become very dark and may even burn. We must, of course, prevent that because burned sugars taste bitter. 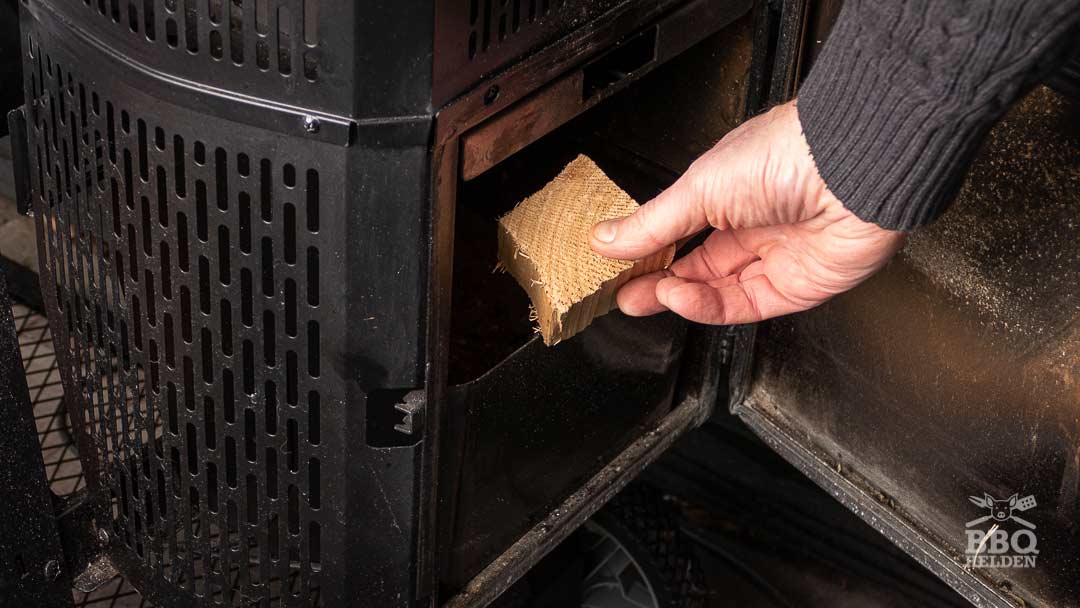 In most smokers, you cannot smoke at higher temperatures. Wood has to smoulder to smoke, and if the temperature is too high, the wood will burn. That is no problem with the Masterbuilt smoker. You add the smoking wood to the ash pan between the glowing particles of charcoal that fall through the grate. This way, you can smoke whenever you want and at all temperatures.

This time we use cherry wood for the beautiful colour and mild smoky flavour it gives. Spareribs are thin and don’t need a lot of smoke. We ensure that we continue to see smoke for the first 2 hours. If the smoke no longer comes out under the lid during that period, we throw a new chunk in the ash tray. 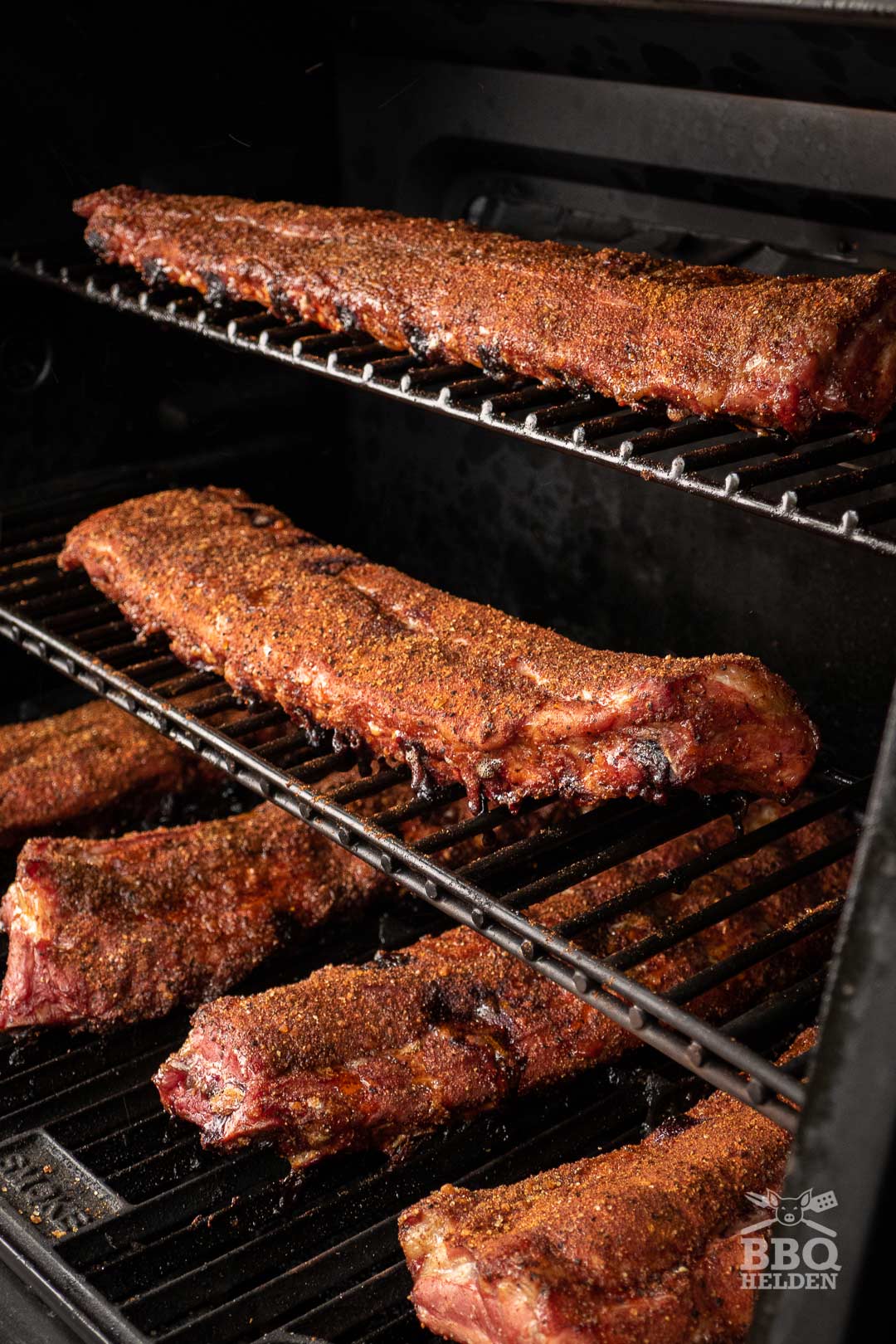 After 2 hours of smoking, the dry rub is firmly attached to all ribs. That is a requirement before you can wrap the ribs. If you do not wait for this, the dry rub will remain soft, and you will not get a nice bark. You could even wash away the dry rub with the moisture that’s in the foil during wrapping in the worst case. You can prevent this by just waiting to wrap until the bark is formed.

We leave two ribs unwrapped, and we will wrap the other 4. They call the wrapping of meat the Texas Crutch. During barbecue competitions they developed this technique to speed up the cooking process without increasing the kettle’s temperature. The meat will also become more tender because the moisture in the packaging steams it.

We wrap two spare ribs in aluminium foil and two in butcher paper. Foil is the most commonly used and can be found everywhere. You can easily fold foil around the spare ribs, so it keeps all heat and moisture in the packaging. Butcher’s paper should have the advantage that the packaging is more breathable so that the steam can escape and the bark stays drier. We will see if it is. 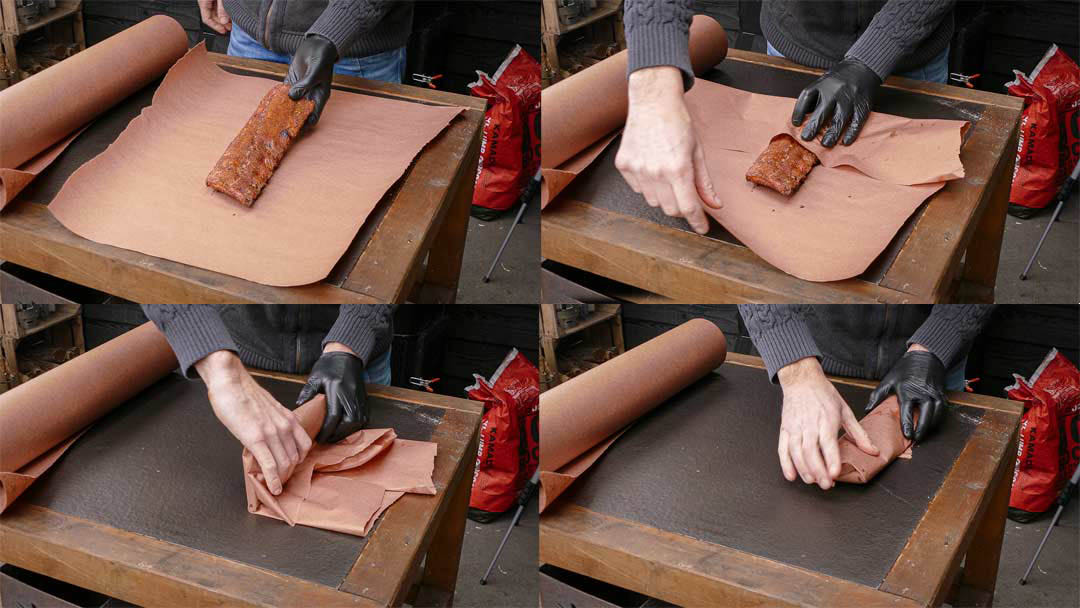 There is a technique for wrapping the spare ribs in butcher paper without it unfolding half the way through. Place the ribs in the centre of the sheet, fold the top and bottom perpendicular to the rib’s length. Then you wrap the spare ribs so that at the last stroke, the open side of the paper is under the bone side of the spare ribs. If you put the packaging with this side down, the package never opens.

We will now also stop adding smoking wood. The wrapped spare ribs no longer absorb smoke, and we want to try to give all six spare ribs the same flavour profile. There will still be some smoke from the charcoal, but that is only minimal. 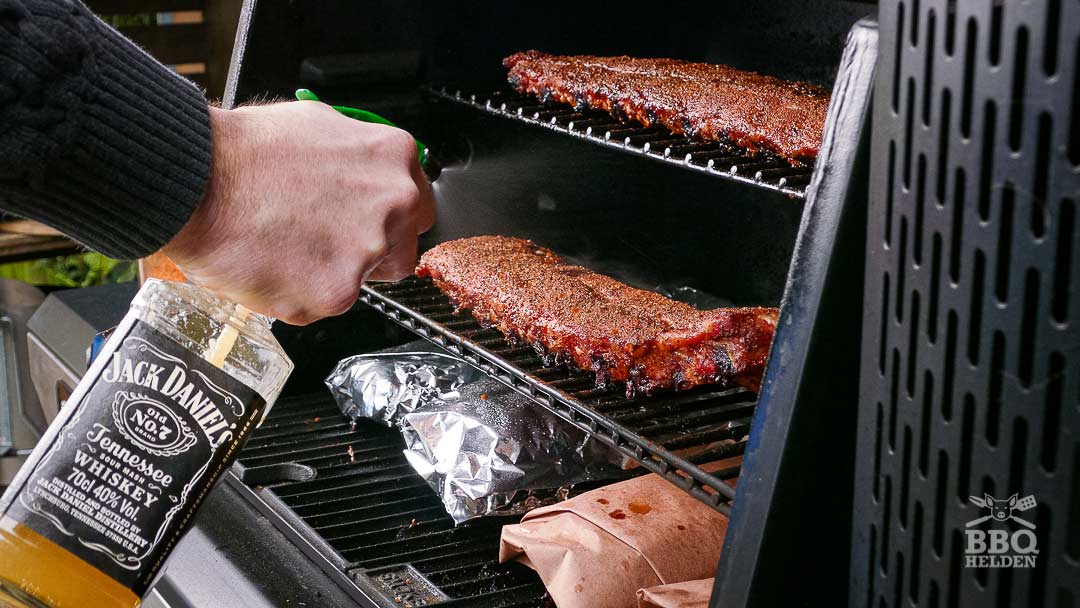 We will spray the two non-wrapped spare ribs with a mix of apple juice, apple cider vinegar and liquid baking butter. That seems to be the right mix to ensure a thicker bark. This has to do with the extra fat that ends up on the spare ribs and the sugars left behind during the evaporation of the moisture. A thin mist is best. Too much moisture makes the crust too wet and therefore not firm. So you apply a light mist, and only when the surface is dry again, you can spray again. 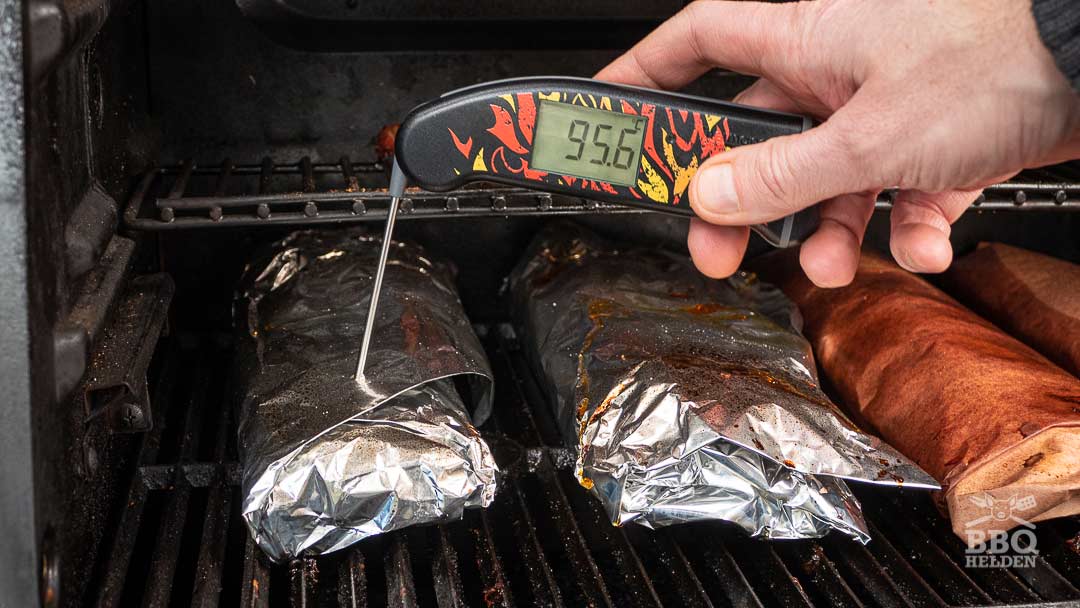 After waiting 2 hours, the foil-wrapped spareribs are done. We expected that. The core temperature is 96°C (205F). The core temperature is not that important with spareribs. Spareribs are ready when you like them. You stick the probe of your thermometer through the foil and the meat. If the probe passes through the meat without resistance, they are very tender. If you like a little more bite, you want to feel a little more resistance. You get this feeling by preparing a lot of spareribs.

We love that the meat doesn’t just fall off the bone but that you have to use your teeth a little. But that is different for everyone, of course. Most people just love those fall-off-the-bone spare ribs. Be careful that it does not become spareribs puree. That can’t be good.

The ribs wrapped in the butcher paper take a little longer to give them an even cooking, and we smoke the unwrapped spareribs for at least an hour longer. They are still not as tender as the wrapped ribs, but that’s fine.

Which spareribs are the best?

We immediately saw a big difference when unwrapping the ribs. The ribs that come out of the butcher paper are slightly darker. The bark is also a bit dryer. We think that’s because it has remained firmer and has not been partially washed away with the moisture that builds up in the foil. The fact that the ribs are lighter is probably also because the meat shines through the bark.

The bark of the unwrapped and sprayed ribs is most evident. There is a noticeably solid layer of spices and sugar over the entire length. At first glance, this is the perfect spare rib. When we cut them in half, we see it even better. The bark of the naked spare ribs is firmer and thicker than the other two. 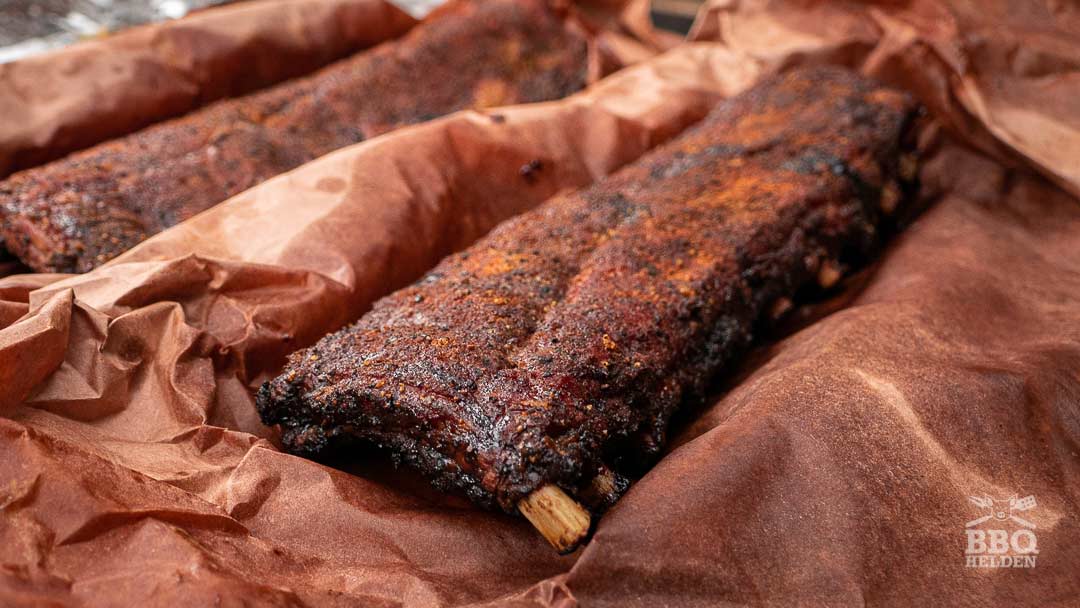 In second place we like the bark that comes from the spareribs that were wrapped in butcher paper. This one is nice and firm but does not have that spongy feeling that the naked spare ribs have. The spareribs that were wrapped in foil clearly have the softest and thinnest bark. And if you see them separately, they are lovely spareribs, but if you had the choice, we don’t think you’d go for the aluminium wrapped ribs. 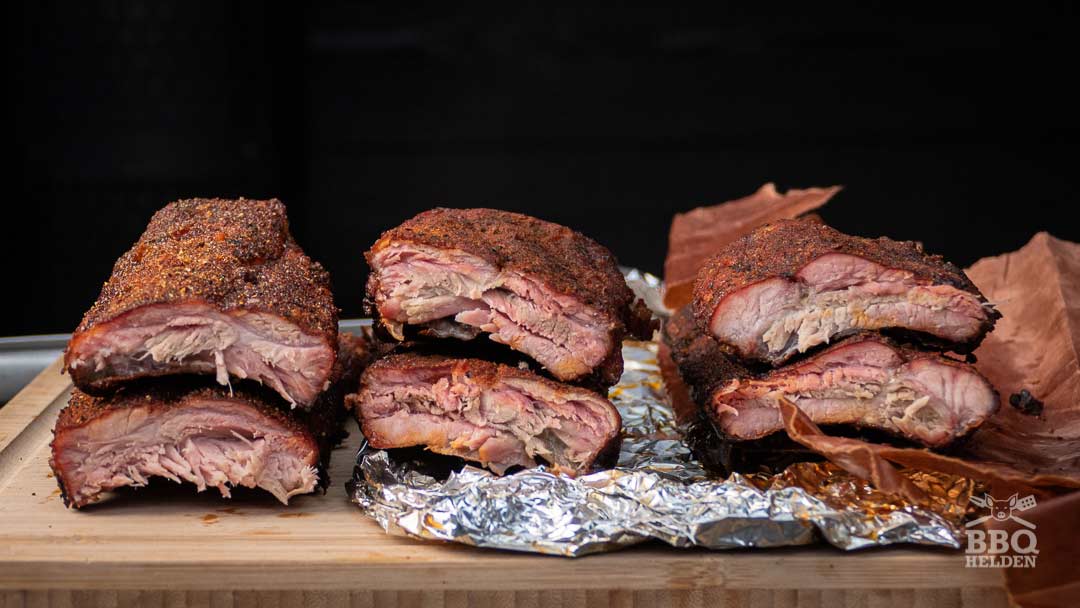 In the photo, you maybe can see that the meat of the foil-wrapped ribs is softer. Most people prefer that. When you serve these spareribs, you are the bbq-hero you deserve to be. The other two spareribs are certainly not tough or chewy, but you know what we mean.

You hardly see any difference in terms of smoke absorption in the meat. In all three spareribs, you see a beautiful pink smoke ring. However, you will notice something different when tasting. The naked spare ribs have the smokiest flavour. That is logical, of course, because they have also been in the smoke the longest. And the bark absorbed more smoke due to the spraying.

Which spareribs preparation is best?

We won’t tell you. But we do think that you can answer that yourself by now. Which spare ribs would you like to have or serve? The naked spare ribs are for the barbecue enthusiast who doesn’t mind putting in a little more work and can enjoy a distinct smoky flavour and meat with a bit of bite. We think these are authentic spareribs as they are served in the southern states of America.

We can guarantee that you will make friends with the spareribs wrapped in aluminium foil. These are very tender. You can pull the bones out of the meat by hand. And they are cooked the fastest. 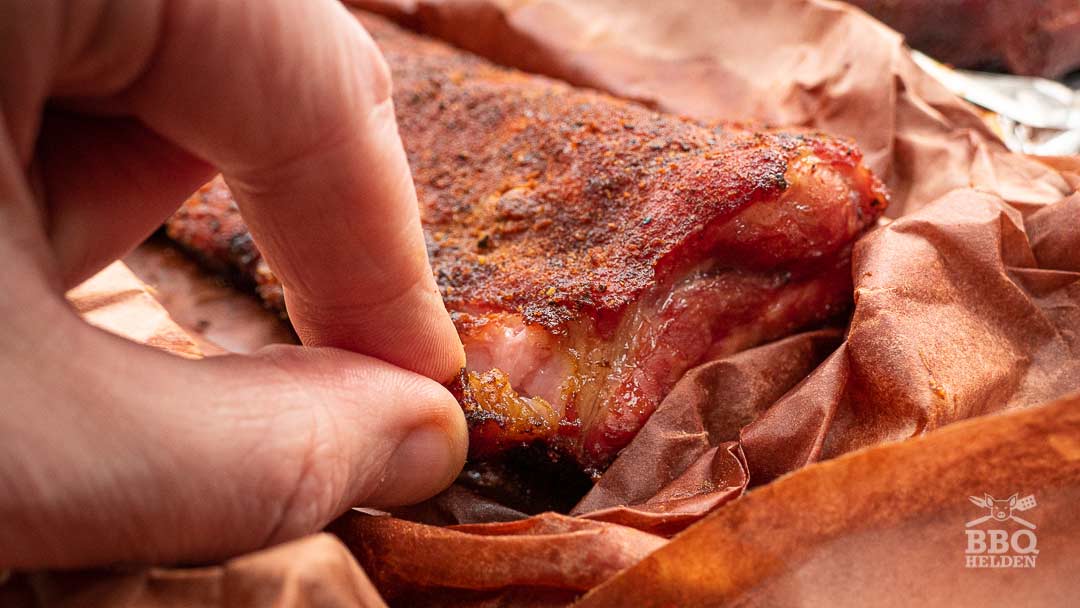 We prefer the spareribs wrapped with butcher paper. The meat is still firm enough that you have to bite it off the bone yourself. The bark is even and dry and is firm enough to pull it off in small pieces. Underneath is delicious juicy meat. In terms of preparation time, it does take just a little longer than the foil-wrapped ribs. But it doesn’t take any more work, so that’s fine.

How will you prepare them from now on? That is the question. Try every way, and you will know which one is preferable for you. Please report it to us on Instagram or Facebook or in the comments below.