Home How to Inject brisket for juicier meat 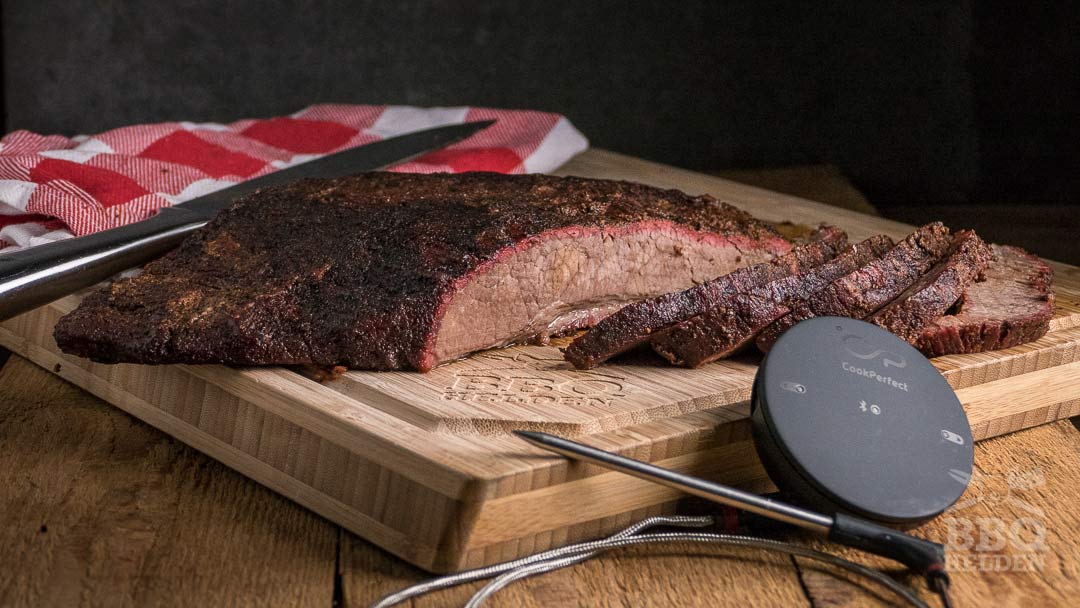 After years of eating brisket from someone else, we had to eventually make it ourselves. But we wanted to make sure that our first experience was a good one right away.

You should know that brisket comes from the cow’s chest. We’ve talked about working meat before. This is the ultimate working meat. This muscle group ensures that an animal of more than 1500 kilo can stand on its feet. Most butchers sell the meat as stew- or ground beef because there isn’t much else to do with it. 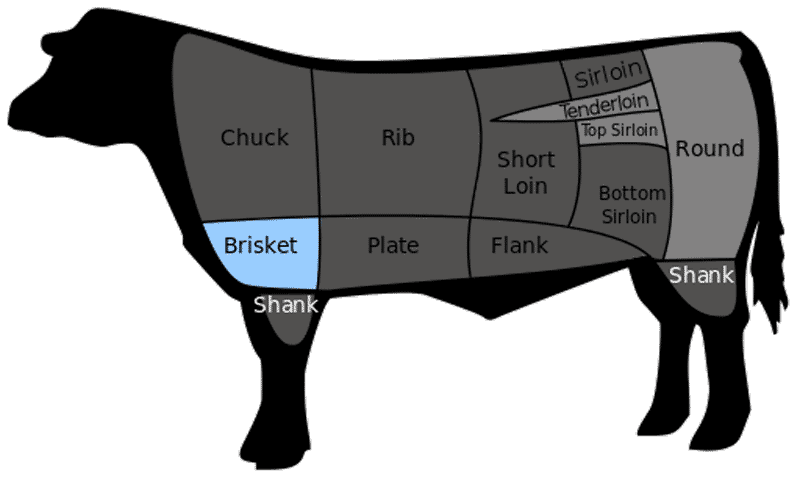 But with low and slow barbecue we convert stiff meat like brisket into deliciously tender meat. The meat is smoked slowly over low heat for a long time so that all the connective tissue melts and the muscles come apart.

With the addition of a little smoke, it becomes something extraordinary. Brisket is the type of meat you can distinguish yourself with as a barbecueër.

We did some low and slow cooking since we started the website, so how difficult could cooking a great brisket be? We’ve had really great and really bad brisket over the years. And some of those were at good barbecue restaurants. 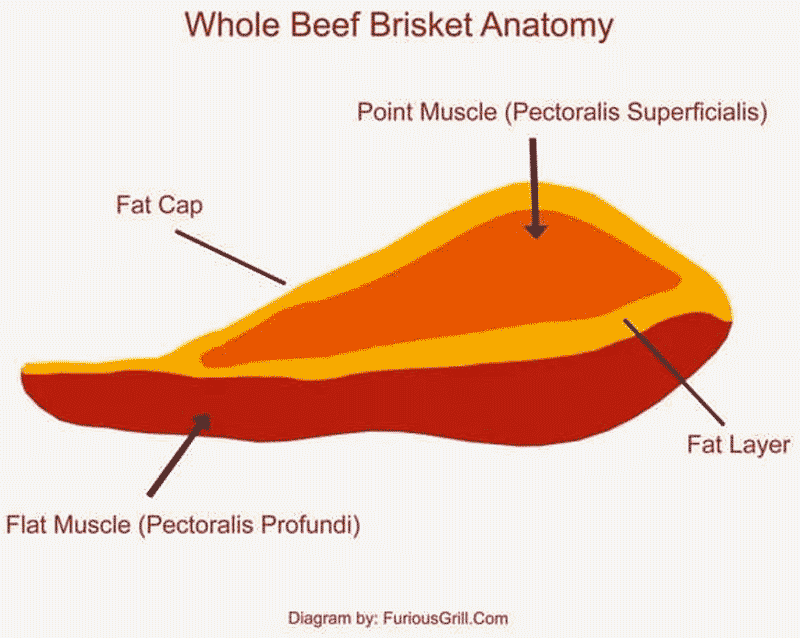 The fact that it is lean meat makes it more challenging to prepare, and that is why we are going to inject the meat. This addition of liquid should primarily ensure that more moisture remains in the meat after cooking.

During the preparation of meat, moisture is expelled that evaporates on the surface. The more moisture there is in the meat, the more you can lose without the meat getting dry. Because dry brisket is a disaster.

You can put a tasty piece of meat on the table, but when it’s dry, you don’t deserve dessert afterward.

What do you inject brisket with?

As mentioned, the primary purpose of injecting is to add moisture. So then you would say water is enough. The majority of the moisture in meat is also water. So a little more wouldn’t hurt.

We also want to add salt. Salt has a reputation for dehydrating, but that is only partially true. Salt is absorbed into the cells of the meat. These cells will, therefore, attract moisture, so that more moisture is retained by the meat.

Then we want to add some flavor. We use beef stock for this. Stock contains water and salt, so that’s a good combination. Nevertheless, we take low-salt beef stock. 6 to 7 grams of salt in a liter is more than enough.

Also, we throw some Worcestershire sauce in for a little spice. The taste of Worcestershire just goes better with beef instead of other hot sauces. But you can, of course, experiment with Tabasco or sriracha if you want. Next, we add a little brown sugar. We believe that barbecue should always have some sugar.

Our injection recipe for this brisket is therefore as follows: 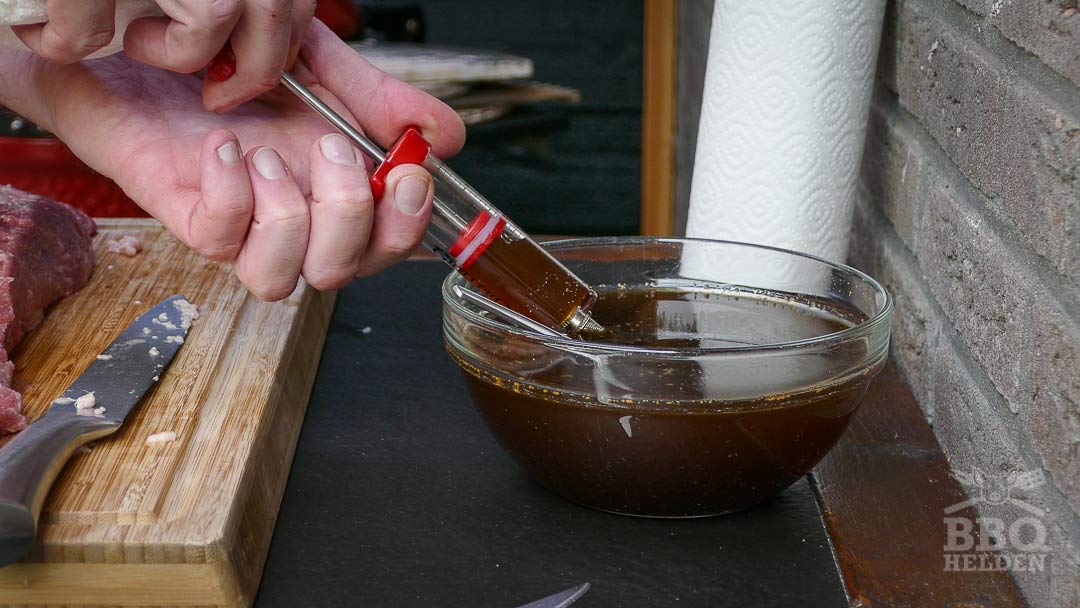 Mix everything well together and ensure that the sugar is completely dissolved in the broth.

How do you inject a brisket?

First, we make sure we trim the meat a little. We remove the very thick and hard pieces of fat. The hard parts will never melt completely. And the softer large pieces will melt but will disappear at the bottom of the barbecue. Along with the dry rub that we will apply later. 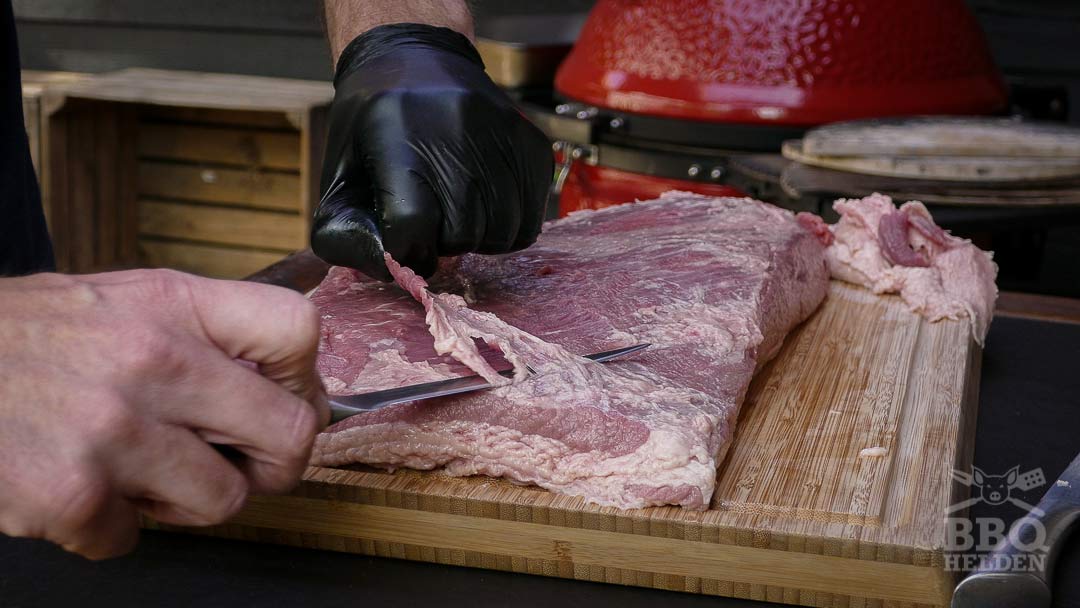 We leave a thin layer of soft fat. That fat protects the meat from the heat so that it cooks slower. This thin layer will also serve as a glue for the dry rub, so it sticks better after smoking.

Then we remove all the silverskin that’s on the other side of the meat. This silverskin keeps the dry rub from reaching the meat underneath. 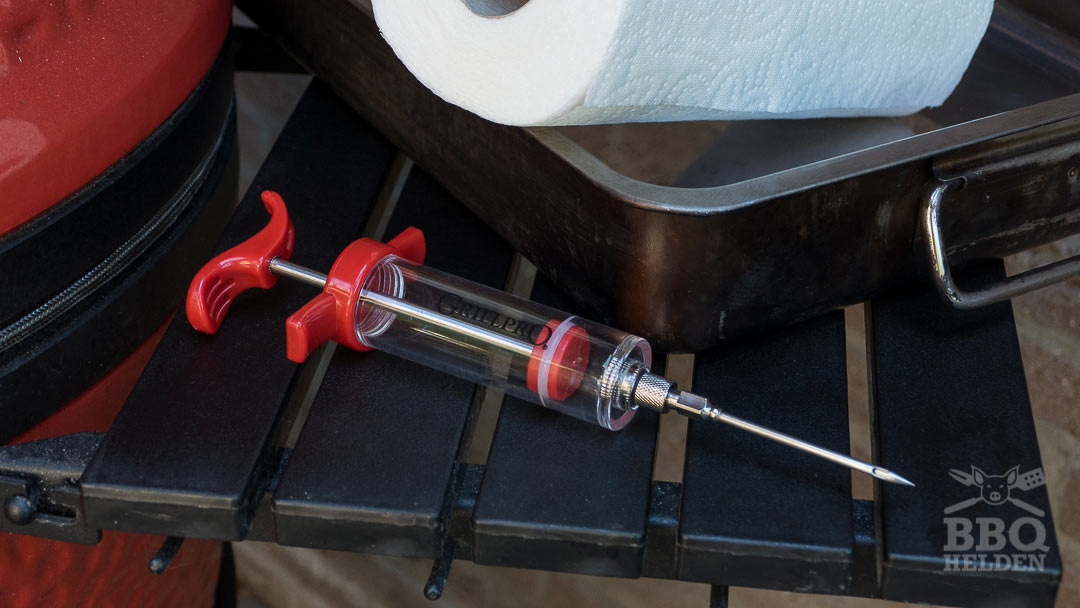 Now we can start injecting. What you need are an injector, a piece of kitchen paper, and an oven tray. We have a plastic injector, but you also have them wholly made of stainless steel. They are more durable and easier to keep clean. If you plan to inject your meat more often, it is definitely worth the investment. 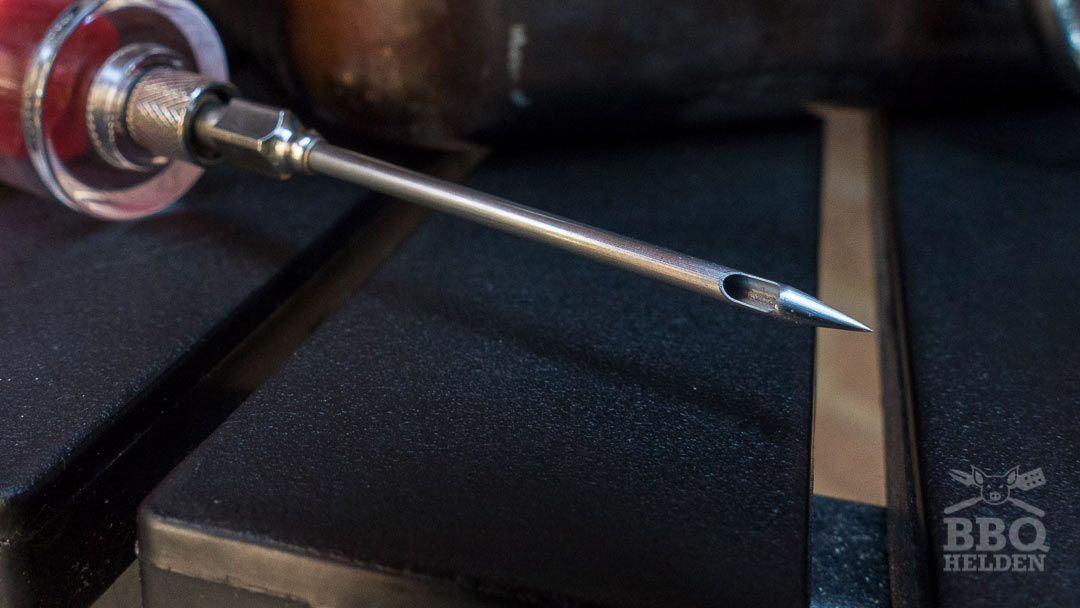 We proceed as follows. We fill the injector, and we insert it into the meat at an angle of 45 degrees. Where the needle goes into the meat, keep a piece of kitchen paper. Because the needle is rather thick, the hole is not on the tip, but on the side.

If we withdraw the needle while injecting the liquid, we come to a point when the needle leaves the meat. This is also the time when the injection liquid is sprayed around your ears. Hence the kitchen paper. 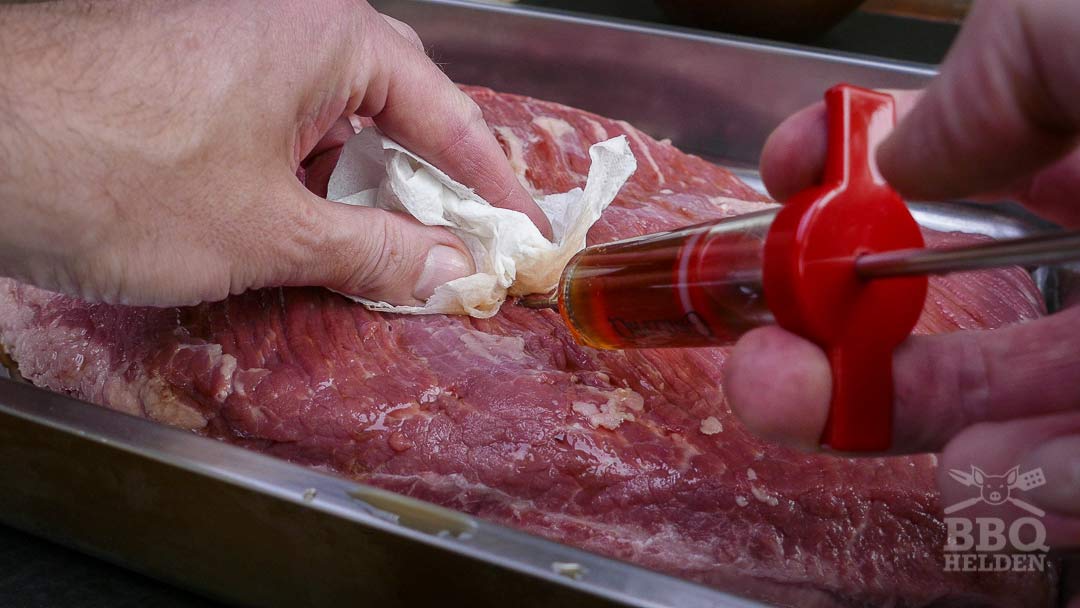 You now repeat this movement in lines every few centimeters so that you know where you have been. Inject in as much moisture as the meat can hold. If it is too much, you will see it run out. So that’s what the oven tray is for.

Now cover the tray with the brisket with some cling foil and put it in the fridge overnight. This gives the cells time to absorb the salt, and the stock will have the time to season the meat.

The next day we will provide the brisket with a dry rub. The taste inside the brisket is taken care of, but a tasty outside, or a bark as we call it, is also a part of good barbecue. The applied salt in the dry rub extracts the surface moisture from the meat, so that the herbs and spices stick.

This dry rub will then form a bark due to the heating of the meat and smoke. This dark bar is the hallmark of real barbecue and very tasty. We have made the following dry rub for this brisket.

First, dry the surface of the brisket with a piece of kitchen paper. It doesn’t have to get completely dry. Then sprinkle the dry rub with an even layer over the meat. Just as much until you no longer see the meat. Then we prepare the barbecue for a low and slow cook.

What do you need to smoke a brisket

First of all, of course, a large barbecue. This is not a very large brisket, but it is already 40 by 25 centimeters (15 x 10 inches). In any case, you need a large kamado or a large kettle barbecue. Smaller will not do.

Then you need charcoal or briquettes that glows continuously for a long time. So we are talking about charcoal from harder woods or good quality coconut briquettes. To produce smoke, we use oak wood. Oak or Hickory produces a heavy smoke flavor. For such a large piece of beef that is perfect. 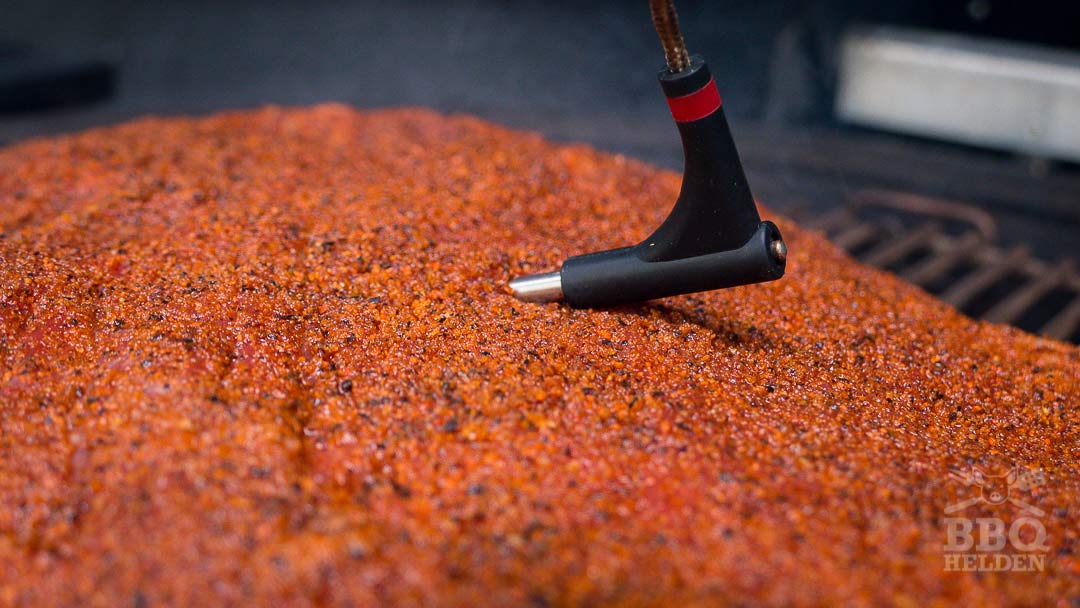 You’ll be surprised at what the difference is between the temperature next to the meat and where the thermometer in the grill is located. This can sometimes be as much as 15 to 20 degrees. 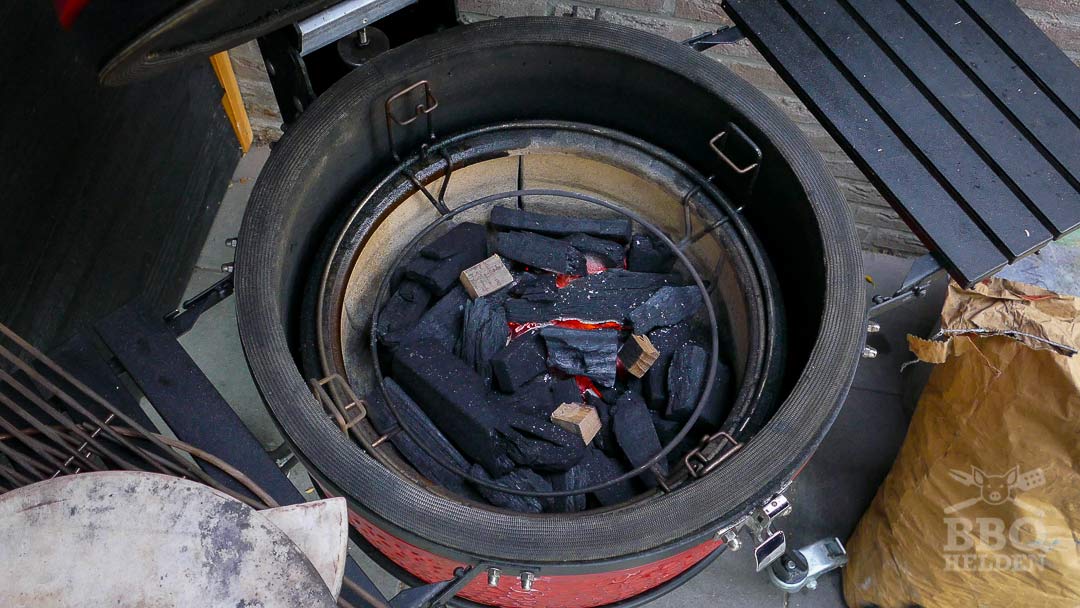 Make sure to adjust the barbecue to a temperature of about 110°C (230F). Slightly higher or lower is no problem but keep it under 150°C; otherwise, the sugar in the dry rub would burn and become bitter. When the barbecue is at the right temperature, place 3 chunks of smoke wood in strategic places. 1 chunk directly in the glowing core, 1 just next to it and the third a little further. This way, you can be sure that you will have a few hours of smoke without refilling. 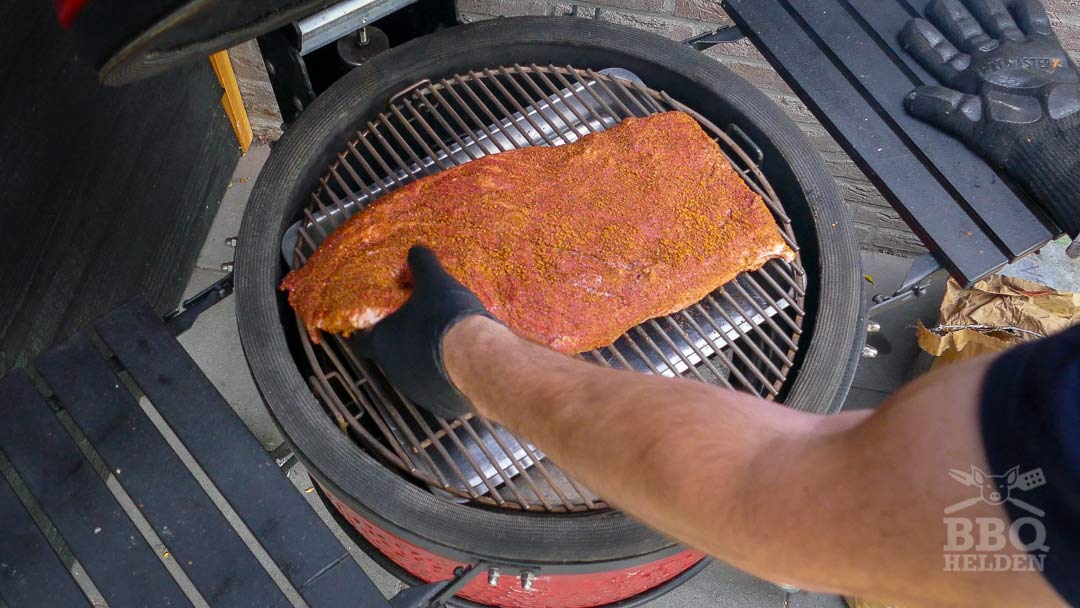 We use the oven tray as a drip tray in the kamado. As mentioned, the meat will expel moisture, and that will otherwise end up in the barbecue. That will then create bad smoke and provides a bitter taste. So place a drip tray. Place the brisket with the fat layer down on the grid. Insert the thermometer and close the lid.

We first cook the meat to 77°C (170F). That is the temperature that the meat must have if we want to wrap the brisket. The meat has already seen enough smoke, and the dry rub sticks to the meat.

So relax, grab a good book, and guard your barbecue for a couple of hours. Our flat cutter brisket is not very thick, so it reached the desired temperature in two and a half hours.

To wrap, we take 2 large sheets of aluminum foil and wrap the brisket well. Then the whole package can go back into the barbecue. We put the thermometer back into the meat through the foil.

We now let the core temperature of the meat rise further to 92°C (198F). That is when we will check whether the meat is tender enough. Because we have wrapped the brisket, it will not cool down on the surface and rise quickly.

After another 3 hours, we reach 92°C (198F) and pierce with a skewer in several places. The meat is tender but not yet soft enough for our taste. We let the core temperature rise to 98°C (208F) before we are satisfied. The whole preparation then took five and a half hours. 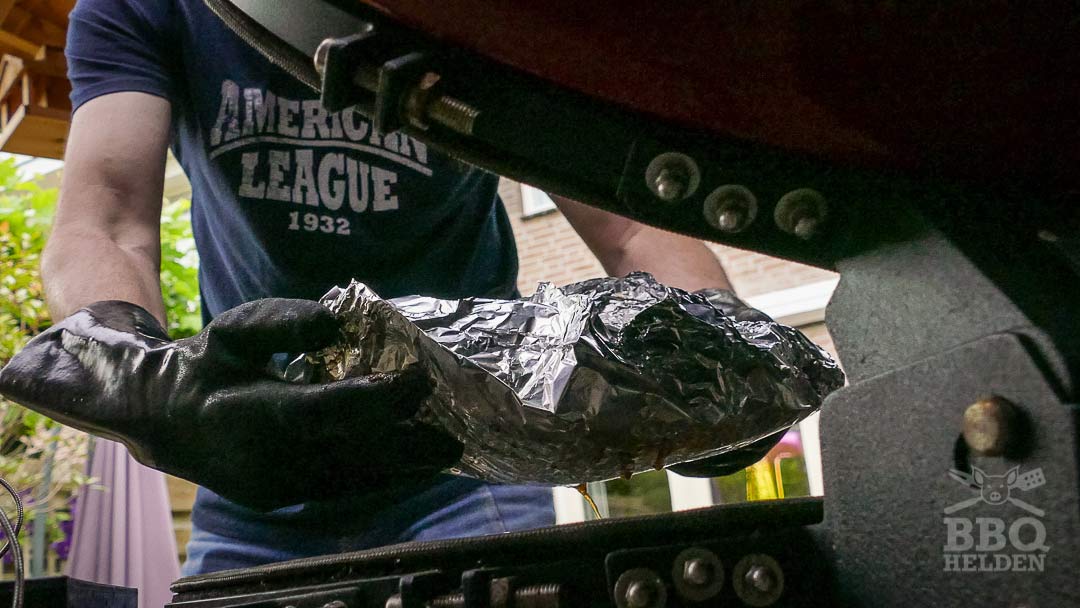 We take the whole package out of the barbecue and remove the oven tray/drip tray, and place the brisket in it. This way, you don’t have to worry about the piping hot juices at the bottom of the aluminum foil. As you can see, the package already leaked when we had to pull it off the grid. 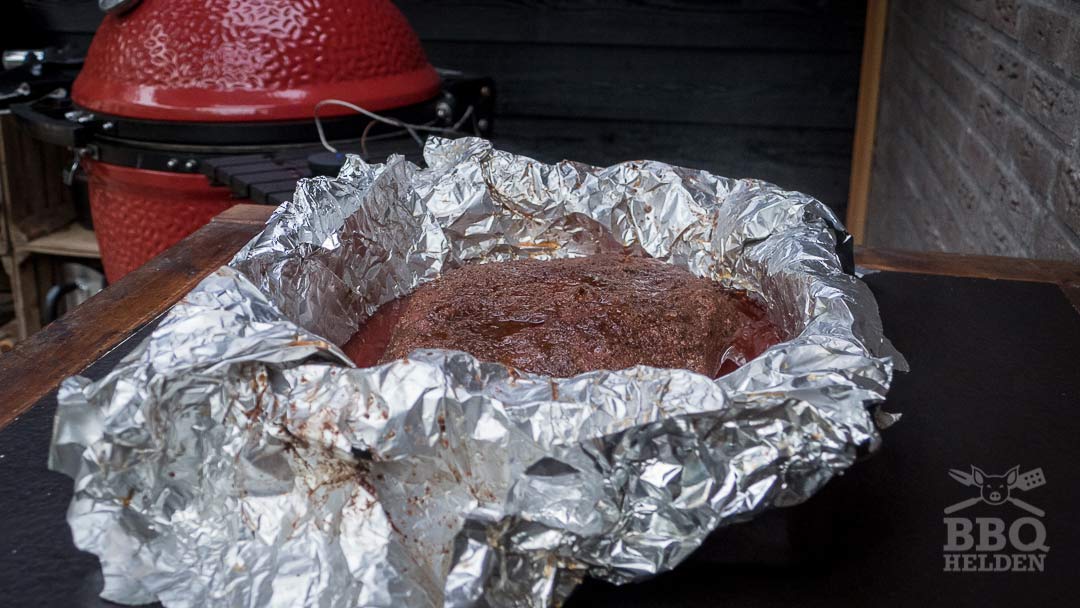 Then we open the package and let the vapor in the package escape. We are going to pack the meat again to let it rest. If there are too many hot vapors in the package, the brisket will overcook and become too soft.

The result of injected brisket

We repack the meat with clean aluminum foil, and then it goes into a cooler for an hour to rest. After an hour, we can finally slice and taste. We notice that the meat is still juicy, but it could have been better. The meat is certainly not dry, but not as moist as we wanted.

This shows exactly what a complicated piece of meat this is. Brisket is quite a lean piece of meat by itself. Definitely a flat cutter. Maybe next time, we’ll also add some melted butter in the injection mix. 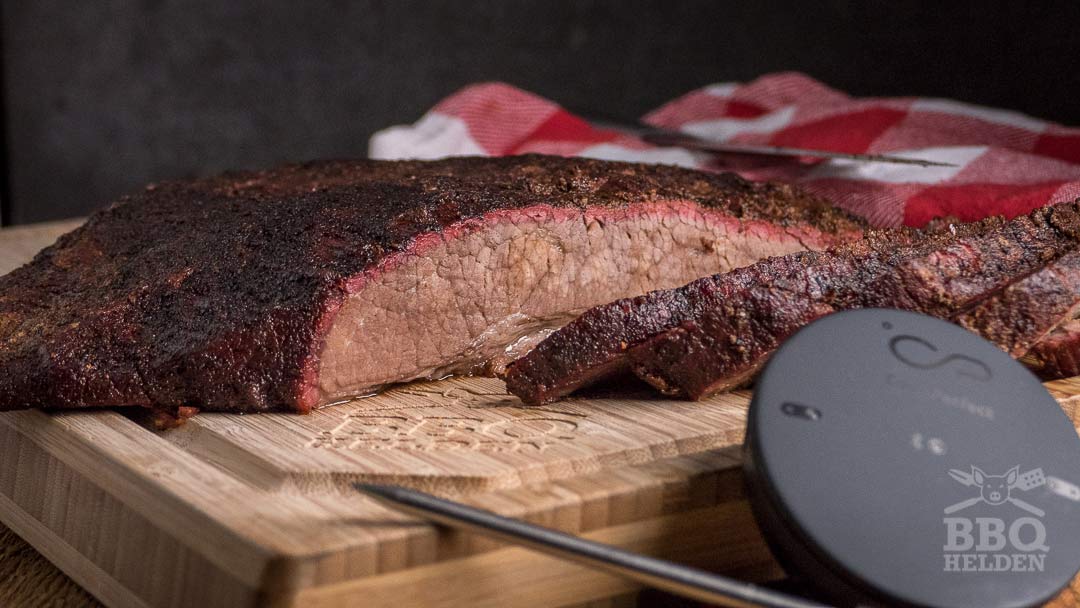 The taste, however, is great. In that respect, the choice of a simple beef stock was right. The bark is also in good condition and enhances the flavor. We also have a beautiful smoke ring. Not necessary for smoke flavor, but it gives the brisket slice some authentification of barbecue.

All in all, we are quite satisfied with the result. We divided the brisket in four and let the neighbors and in-laws taste. They were all very enthusiastic, and that’s what’s important. We will do this again soon, but then with a whole packer brisket.