Home How to How to make fermented Louisiana hot sauce 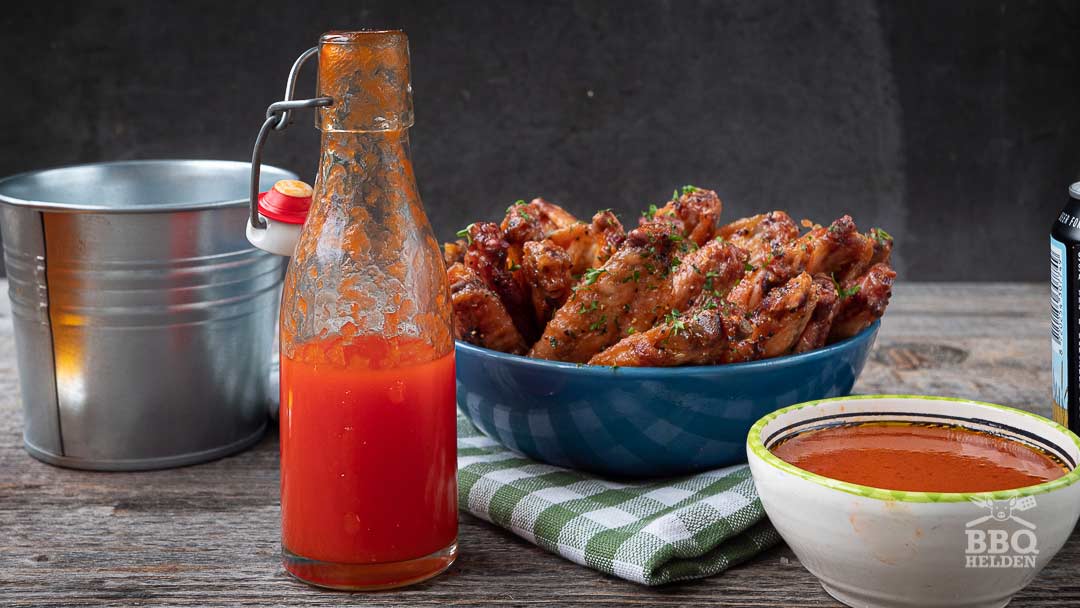 We love Tabasco. Tabasco is a Louisiana hot sauce made with fermented peppers. In the supermarket, you will also find Frank’s Red Hot. In Indonesian shops, you will often find even more varieties. All sauces are made from chilli peppers that, in the case of Tabasco, ferment for three years in oak barrels.

We wanted to try that too. Not three years and not in oak barrels. But three weeks in glass jars. The goal was to find out if there is ultimately a difference between a Louisiana hot sauce with fresh peppers and fermented peppers.

What is Louisiana hot sauce

Louisiana hot sauce is a sour hot sauce made from chilli peppers, vinegar, and salt. That’s all, and yet you can make many different choices with these three ingredients to make the sauce your own.

Which peppers should you use for Louisiana hot sauce

In general, the cayenne pepper is the most commonly used pepper for Louisiana hot sauce. But Tabasco uses the Tabasco pepper from the Mexican Tabasco region. Of course they do. We will make the sauce a bit milder by using red jalapeño peppers. This way, we will soon be able to clearly taste the difference between fresh and fermented sauce. 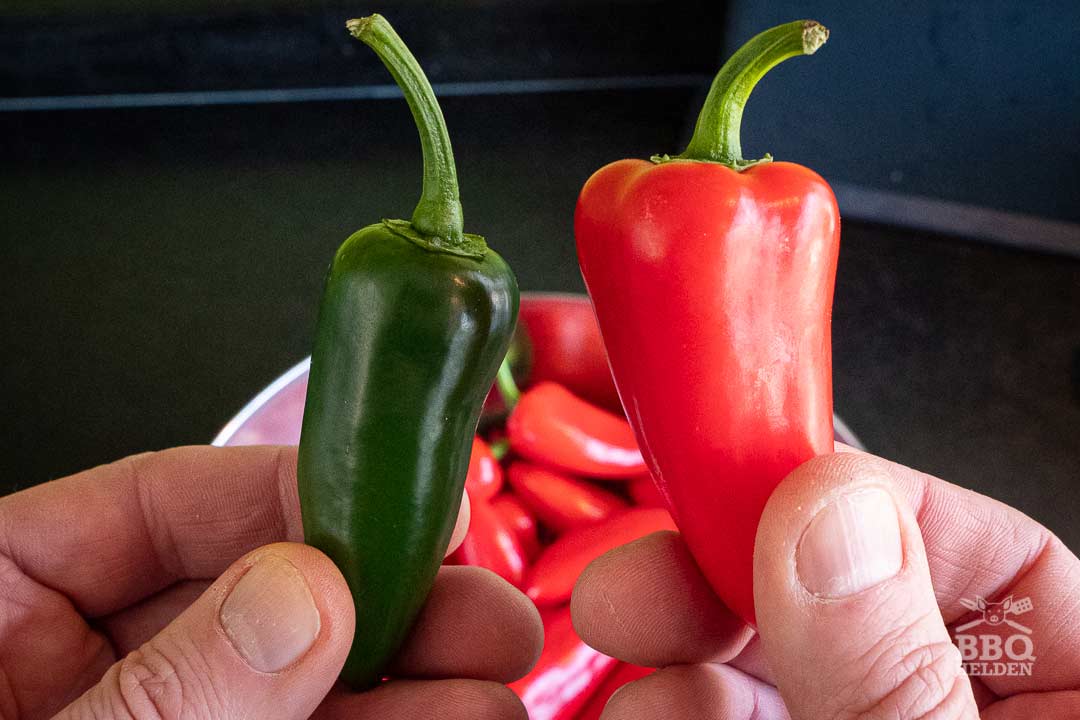 In the supermarket, you will generally find the milder green jalapeño. The red jalapeño is a bit bigger, sweeter, and, as said, just a bit hotter. We love the taste of the jalapeño pepper, so we ordered one kilo of red jalapeño peppers online.

Why would you want to ferment peppers

Fermenting was invented to preserve vegetables. This was convenient if sailors wanted to eat healthy while en route. Personnel on ships where they ate sauerkraut and pickles had much less scurvy.

That’s because the microorganisms created during fermentation helped digest their food and break down toxins. The taste also improved, so the sailors started fermenting vegetables at home and experimented with other vegetables, including peppers.

How do you ferment peppers

First, we cut the stems off the peppers and cut the rest a bit smaller. We’ll leave the seeds and glands on because we’re not worried that this sauce will get too hot. If you are afraid of the sauce getting too hot, remove them before cutting the peppers smaller.

Then you stuff the sliced ​​peppers into jars that you can close tightly. Here we use ordinary jars that we had lying around. You could also use large preserving jars. In any case, keep in mind that the peppers must be wholly submerged in water to prevent mould from forming.

We first take 100 ml of boiling water in a pan and add 40 grams of salt. When the salt has been completely absorbed, the pan is removed from the heat, and we top it up with cold water until we have a litre of salt water. 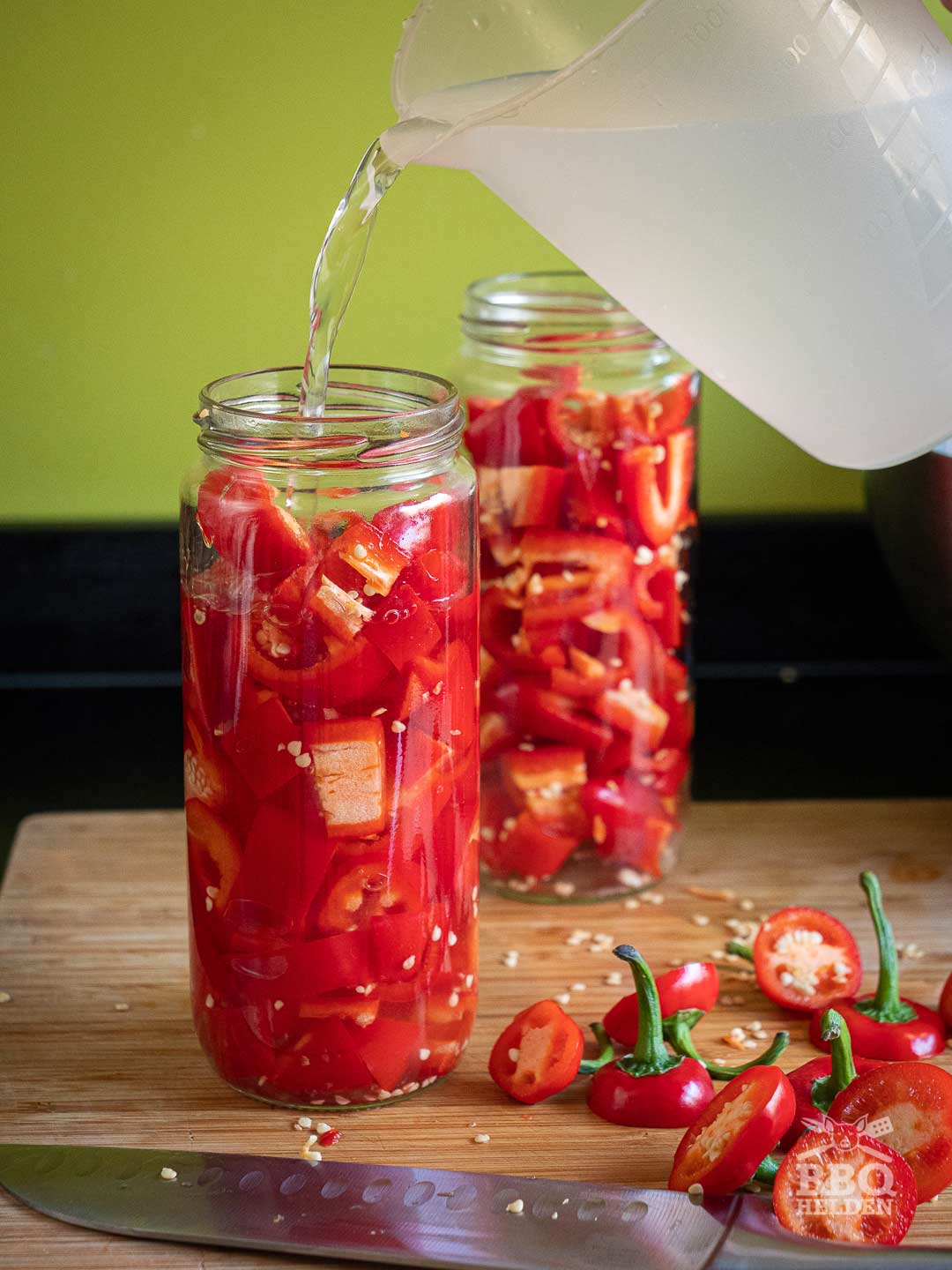 Pour this water over the peppers until about two cm below the rim and the peppers are completely submerged. That two cm of oxygen is essential because no fermentation process will start without oxygen. We got the tip to fill a plastic bag with salt and use it to keep the peppers under water because the loose pieces can float due to gas formation.

We leave the pots at room temperature for three weeks at a spot in our kitchen where there is no direct sunlight. The perfect temperature is around 20ºC (68F). Lower than 15 degrees (59F), the fermentation will occur very late in the process and when the temperature is too high, and we are stewing the vegetables, which is, of course, not our intention.

Not much happens to the peppers in the first week, but after 4 or 5 days, you see that the water becomes cloudy. Then the PH value of the water will also decrease and become acidic. What happens is that the sugars in the pepper are converted into alcohol. The alcohol is then converted into a vinegar-like acid by the oxygen in the pot. This is when the fermentation begins. 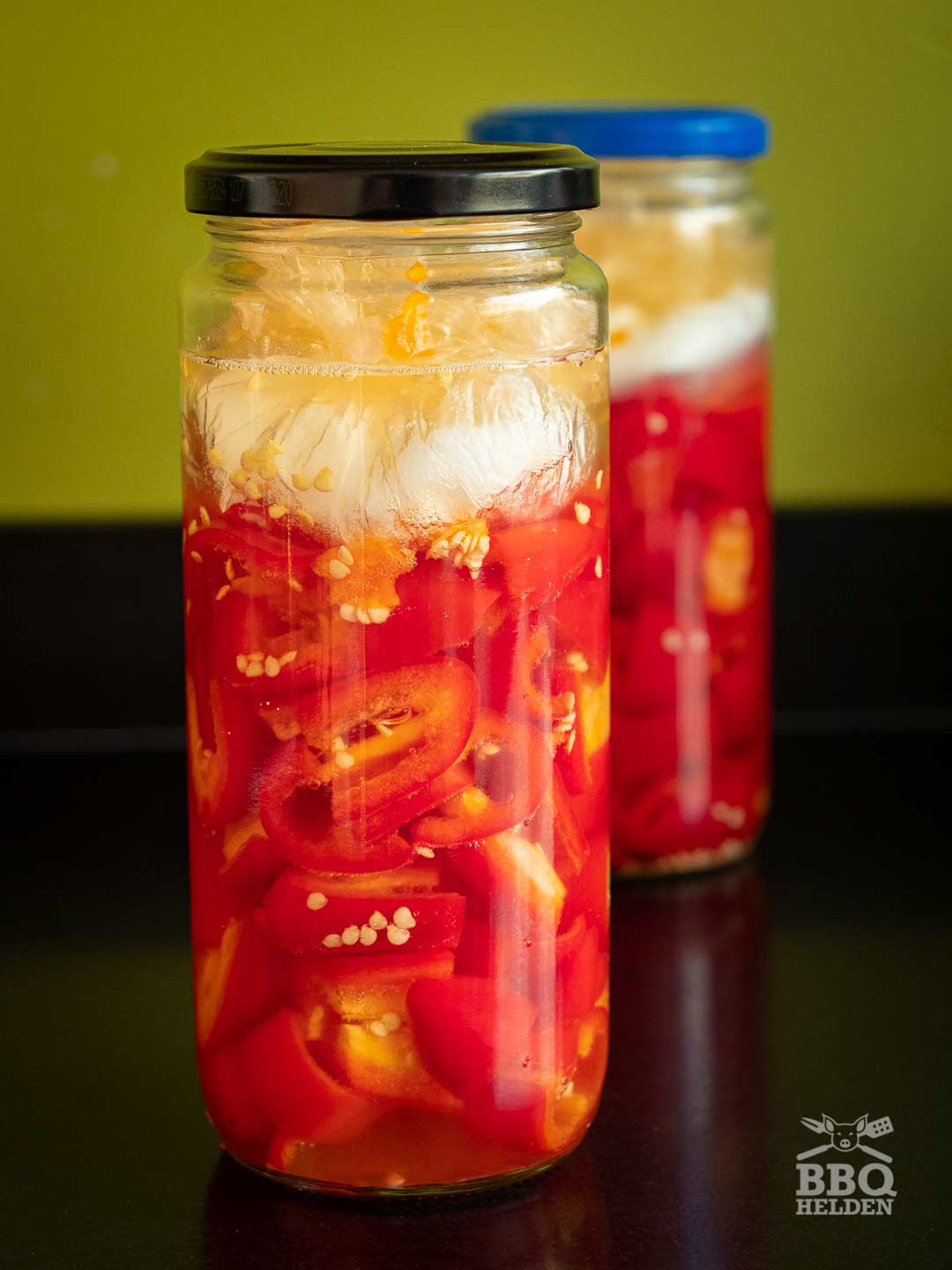 Now it is also essential to open the jars every day, or every other day, to let the peppers burp. The gas formation in the pots is then so great that this gas comes out anyway. Or by deforming the lid or breaking the glass. In both cases, it will be a mess.

If you are afraid you will forget to open the lids, we recommend buying a fermentation jar. You have these in different sizes if you expect to ferment larger quantities. As far as we’re concerned, you can leave the peppers for a few years like this, but after about three weeks, we are quite curious and want to taste the result. 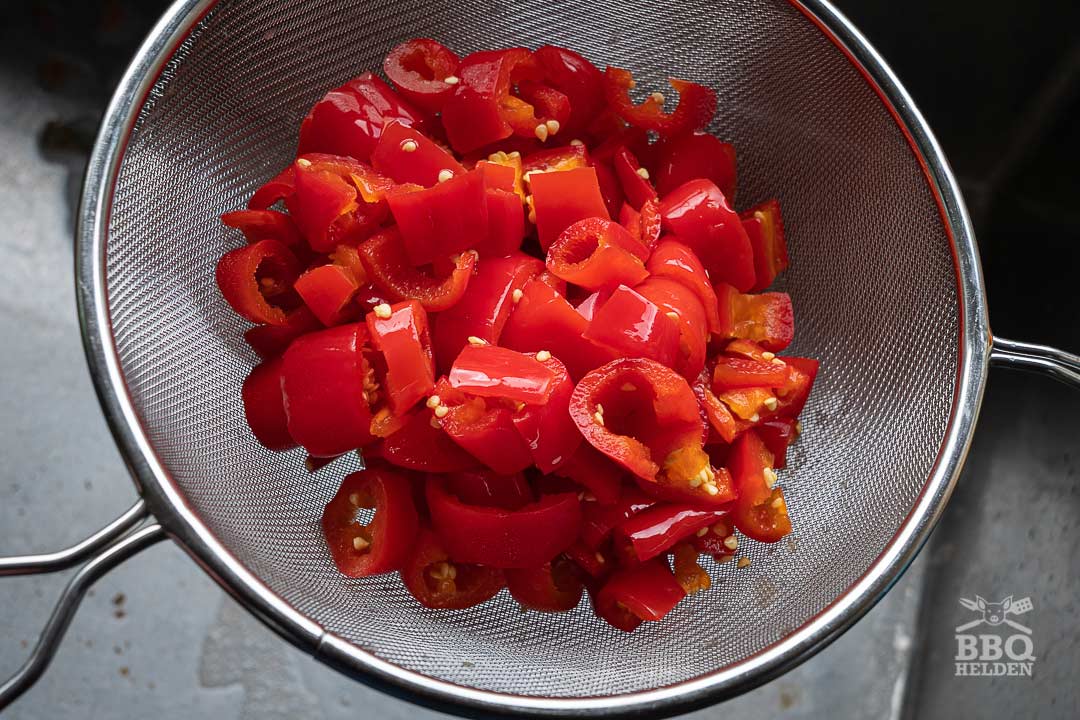 We throw the peppers in a sieve and rinse the brine from the peppers. The peppers are then placed in a pan with 250 ml of vinegar. We bring this to a boil and let it simmer for fifteen minutes so that the peppers become soft and any bacteria that may have arisen die.

Which vinegar for the hot sauce

The cheapest vinegar you can use is white vinegar. We find this vinegar too strong for the jalapeno peppers we use. That is why we choose the softer and sweeter apple cider vinegar. You can also use white wine vinegar, which is much milder. Or a red wine vinegar made from fermented red wine. In the future, we also want to make a hot sauce with balsamic vinegar to give the hot sauce a more raisin-like flavour. 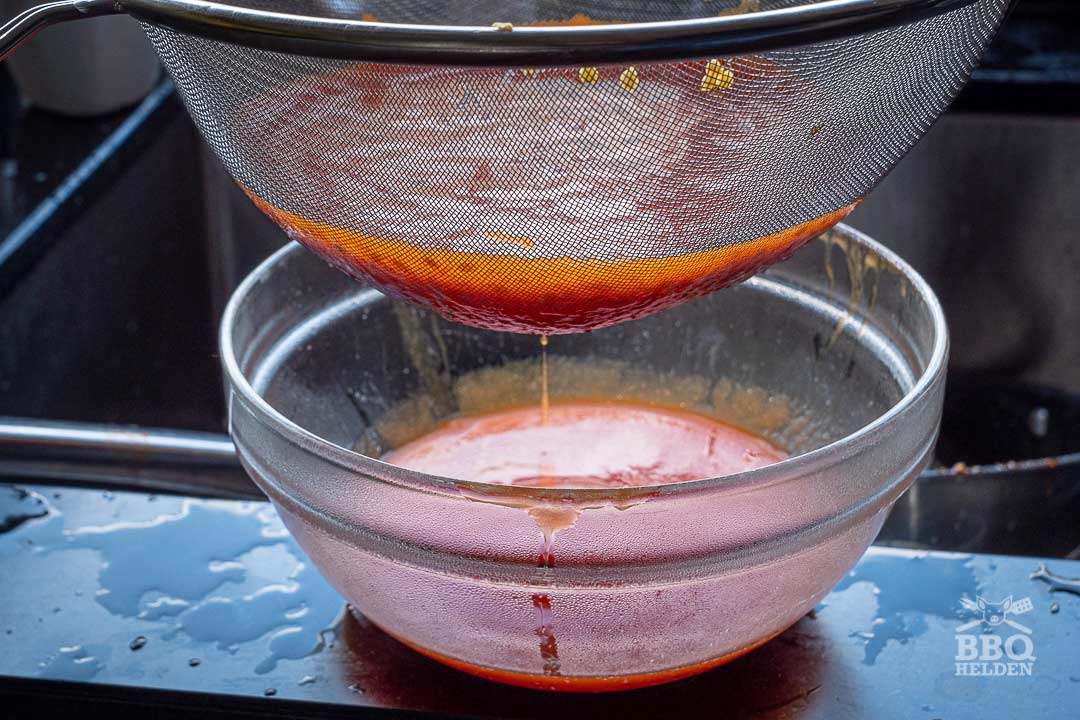 After cooking, let the peppers cool slightly before pureeing them in a blender into a thick sauce. Because we want a Tabasco-like sauce, we sieve the sauce again so that all the seeds and glands remain in the sieve. Now you can season the sauce in the bowl with extra salt, but we don’t think that is necessary after we have tasted it.

The difference between fresh and fermented Louisiana hot sauce 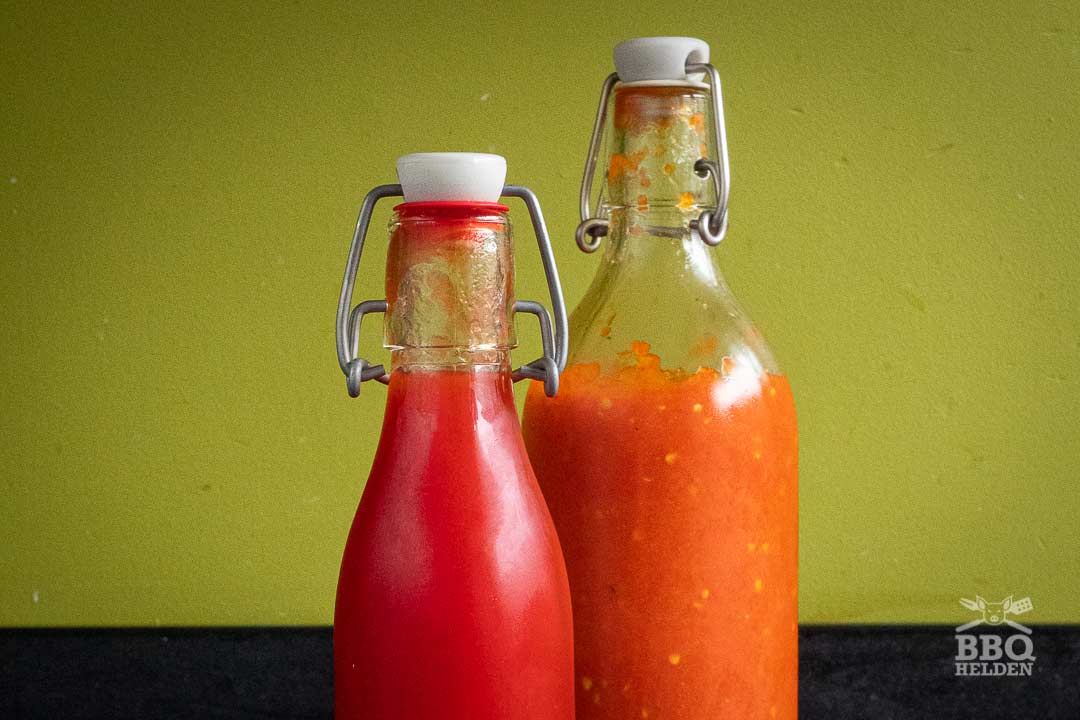 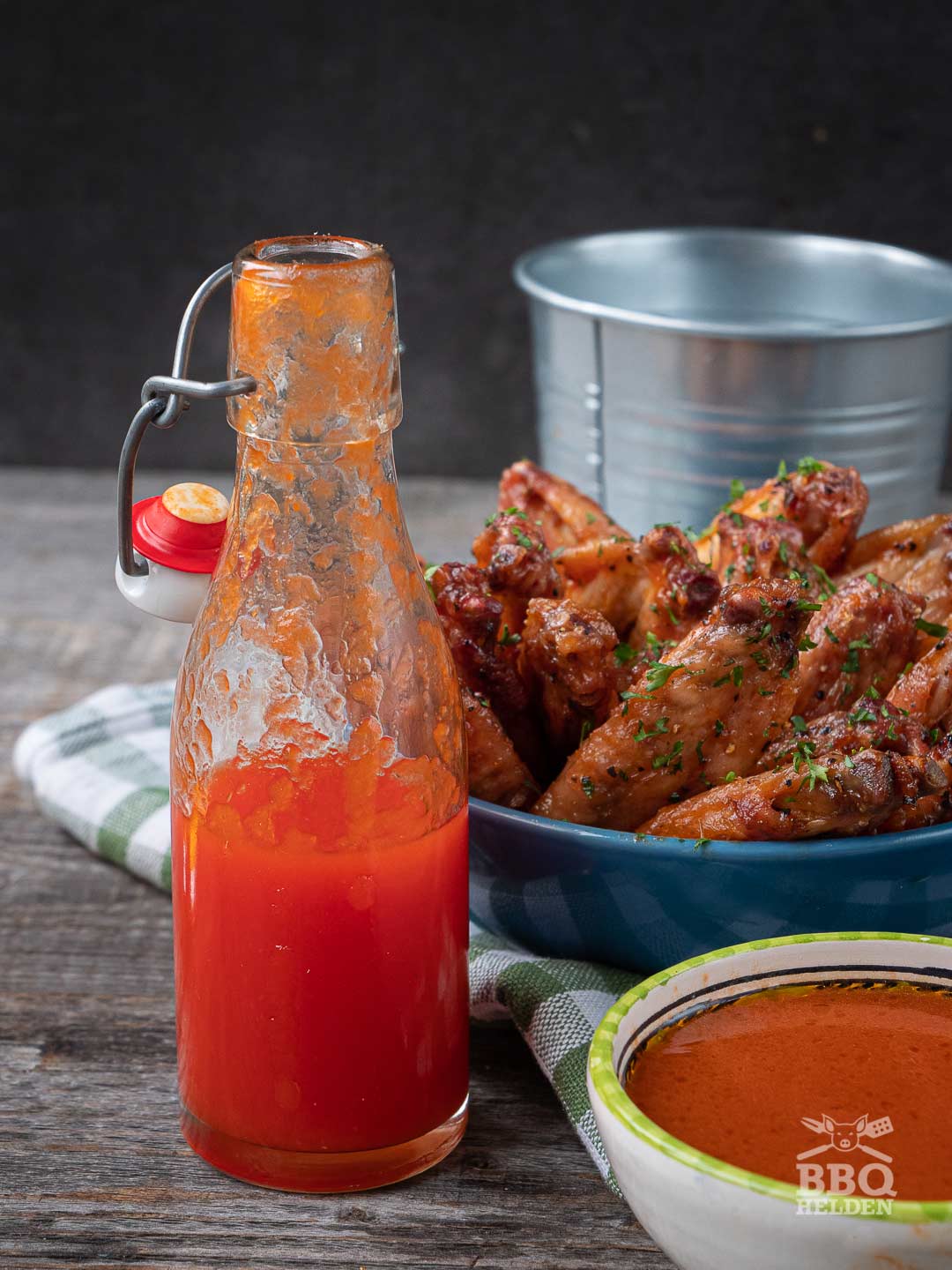 Now that this experiment has been successful, we will ferment more peppers and use other types of vinegar to see if we can create different flavours.