Home How to How to grill the best turkey legs

How to grill the best turkey legs 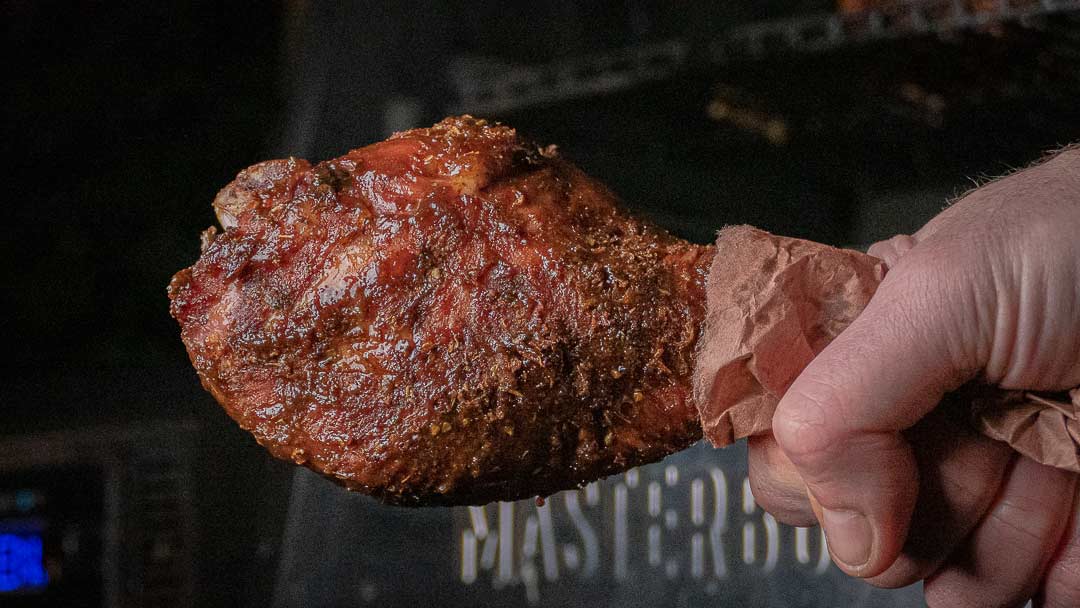 We love turkey meat. But rarely do we throw a whole bird on the grill. The best part of a turkey is just the leg anyway. The meat is juicier and much more flavorful than the breast meat. And a couple of legs are enough for dinner.

We have done several different cooks over the past few weeks to determine the best way to prepare a turkey leg. We came to a preparation that gave a great result every time. Juicy, tasty and tender meat that you can put on the table with confidence.

Where do you get turkey legs

You usually won’t find any turkey legs at the supermarket in the Netherlands. Maybe you can find them around Christmas, but not for the rest of the year. You have to go to the poulterer or online butchers for good turkey meat. There you buy the turkey leg as a backless turkey leg. That’s the drumstick, with the thigh.

Between the joint you cut the thigh from the drumstick with a sturdy knife, leaving you with two excellent turkey cuts. The turkey thigh is ready to throw on the barbecue right away. But the drumstick needs some preparation first. From now on, we call the drumstick the turkey leg because we associate a drumstick too much with chicken.

You need to brine turkey legs

Turkey meat is lean meat by itself. And lean meat and barbecue don’t mix well. The chance of dry meat is simply too high. We first prepared the turkey leg without brine, and that sometimes went well, but much more often, the leg was just too dry. We ate them anyway. And they were tasty too. But we could do beter. After we brined and grilled a few legs, we had a good result every time. 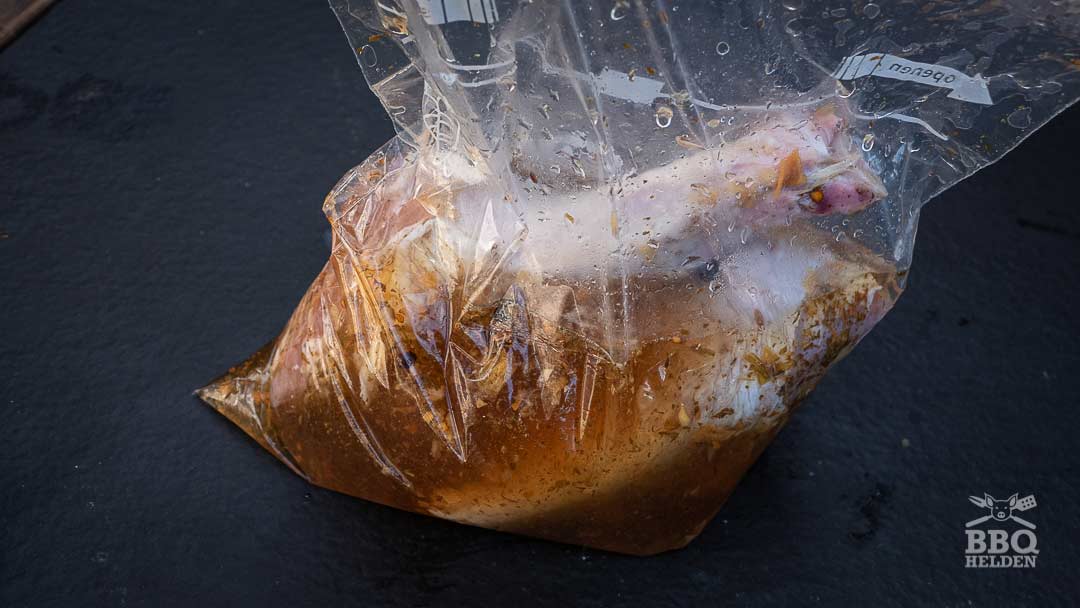 A wet brine is in essential water and salt, and it does basically three things. The salt penetrates deep into the meat and helps it to absorb and retain moisture during cooking. That salt will then break down the connective tissue, making the meat more tender. The salt also gives flavour to the meat inside. The rest of the flavors in the brine remain on the surface and may only penetrate a few millimetres into the meat. We used special curing salt. This salt contains sodium nitrate that ensures that the meat retains its pink colour. It just looks better at the end.

The curing salt must be diluted with water. Read the package to see how much. You need about 2 litres of brine for two turkey legs. Bring half a litre of water to the boil and put 1,5s litre of water in the freezer. Dissolve the brine salt in the boiling water. When the salt is gone, remove the pan from the heat and mix in the cold water. Then you have a cold brine that you can use right away.

Place the turkey legs in a zip lock bag and add the brine. Place the bag in the refrigerator for at least 12 hours to 2 days. If you think this is all taking too long, you could also inject the brine.

Along with the brine, other flavours have also been added to the turkey leg. But we want to make a real flavour bomb, so we are going to apply a dry rub. The brine already contained enough salt so that we will leave that out. We always make sure that there is paprika and a little spice in the dry rub. Also, a little sugar can’t be missed because it gives you a nice colour and a better bark. That’s the result of smoke and melted sugar.

This is our dry rub recipe: 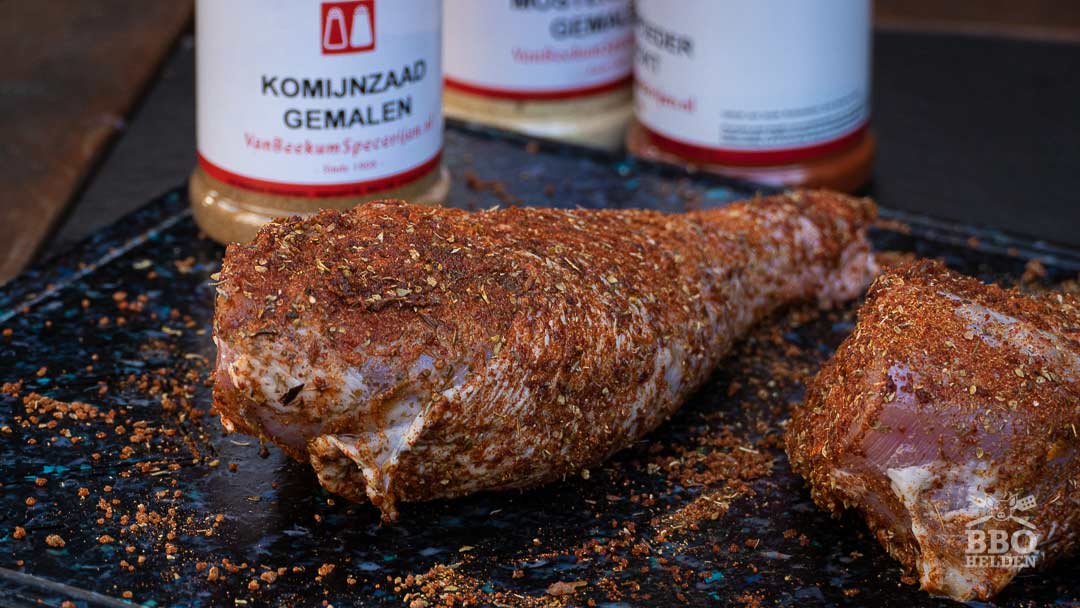 Pat the turkey legs dry after brining and sprinkle an even layer of the dry rub on all sides of the turkey leg. Leave them while you prepare the barbecue.

We are going to smoke turkey legs

Turkey meat is tougher than chicken and should therefore be cooked low and slow. This can be done on a kamado or on your kettle barbecue. We use the Masterbuilt 560 smoker. This is a so-called gravity fed smoker. A column of charcoal (or briquettes) is lit from below like a fire starter, after which the heat is blown into the boiler through a fan. 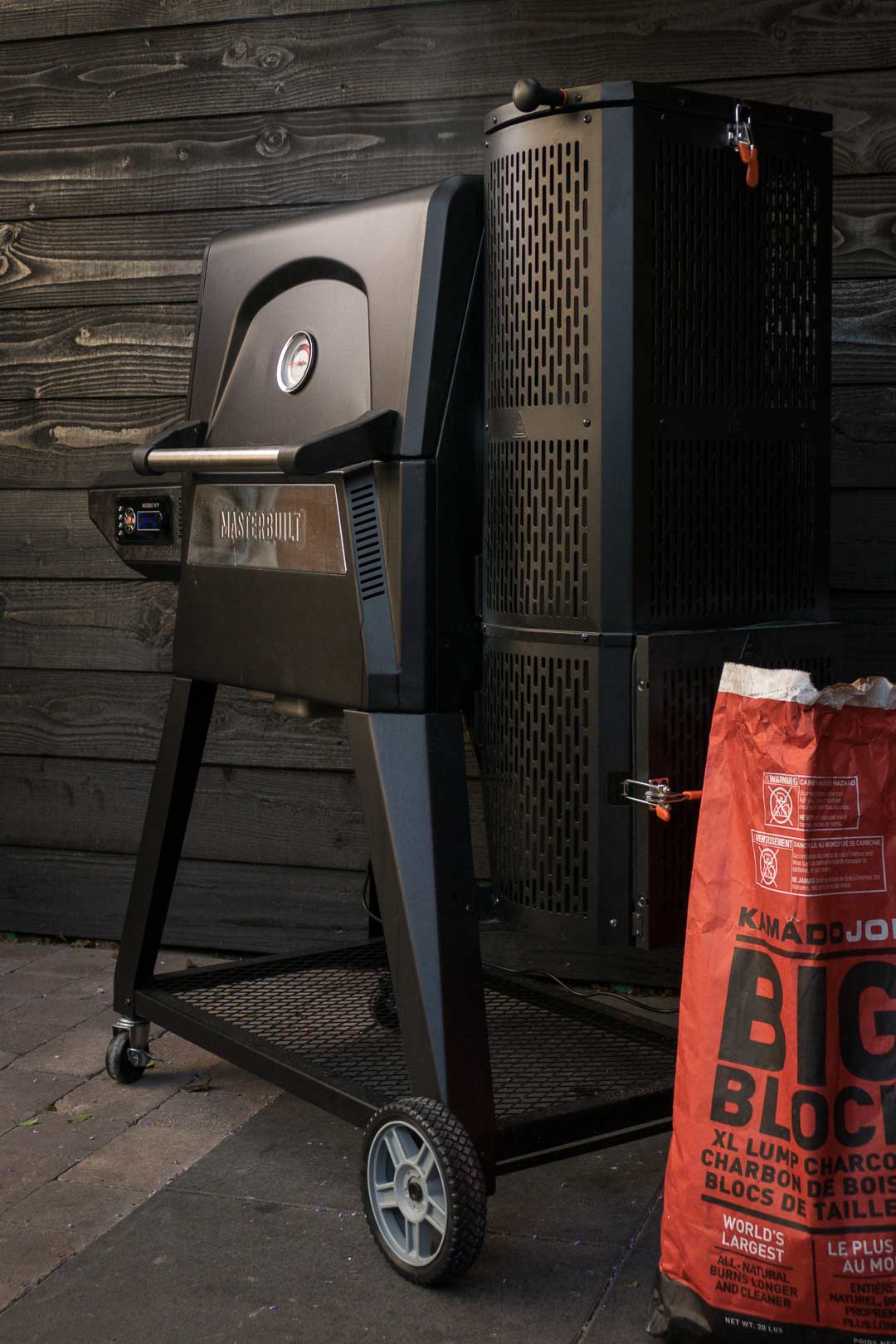 The fan is controlled by a thermostat that’s set on the smoker or through an app. The Masterbuilt smoker works easy and fast. It is up to temperature within 15 minutes after lighting and is very constant after that. Even after opening the lid, the temperature is stable within a minute. 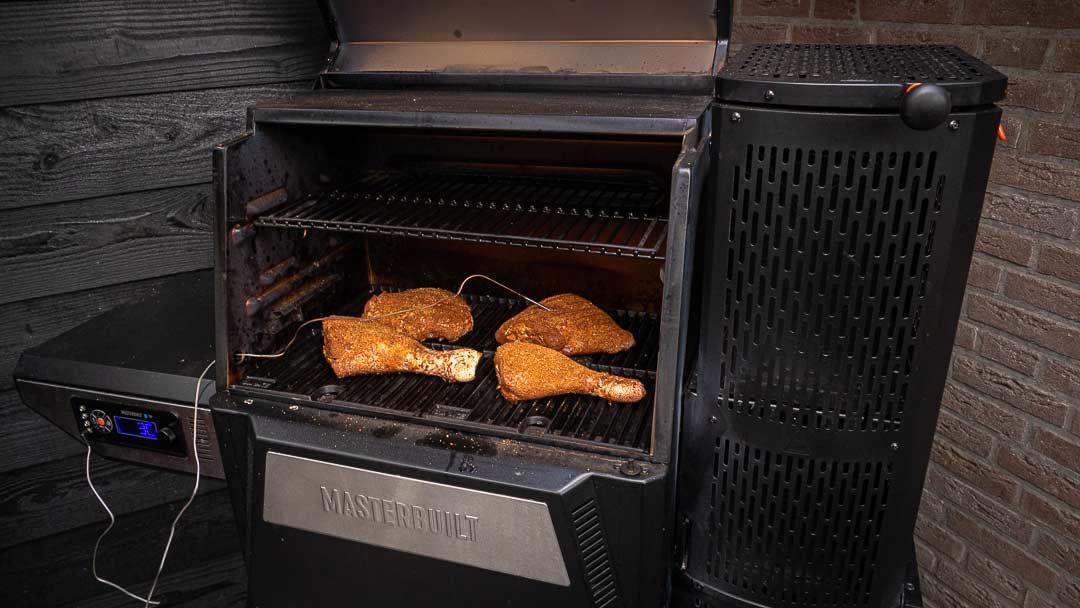 We fill the Masterbuilt with briquettes and set the app to 120°C (248F). We put a block of smoke wood between the briquettes. Any kind of fruitwood is suitable for turkey. For example, cherry wood gives the meat a beautiful dark red colour. Then you throw the legs on the grates, insert a core thermometer into them and close the lid.

How long should a turkey leg be cooked 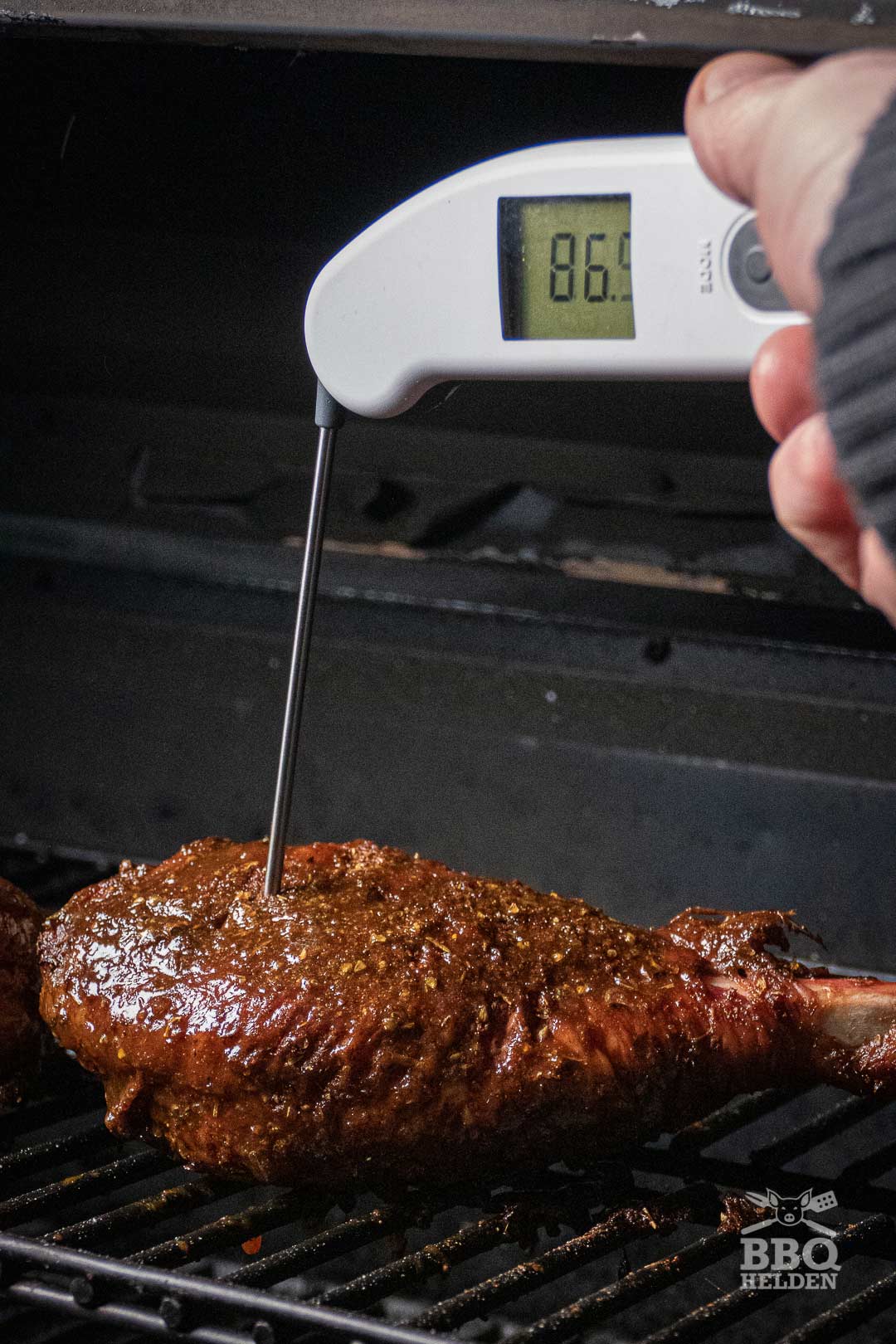 The turkey leg contains several tendons that you cannot eat. If the meat is not tender enough, you have to eat it between the tendons, which is not great. Somewhere around a core temperature of 75°C (167F), another beautiful thing happens. The collagen in the connective tissue is converted into gelatin. And that is delicious stuff. Around this temperature, most moisture is also expelled by the meat that ends up on the surface. This moisture cools the meat, and then it ends up in a so-called stall. The longer that stall remains, the longer the collagen gets the chance to be converted into gelatin.

This is also the reason that we started brining the turkey leg. We wanted to keep as much moisture in the meat as possible. So the more you have been able to get in, the more is left behind. The stall doesn’t take that long either. You will see that the core temperature in the meat will not rise or will rise very slowly for about half an hour to 45 minutes. When no more moisture is expelled, the stall will stop, and the temperature will rise again.

When the turkey leg has reached it’s desired core temperature, you will also see that the meat has withdrawn from the bone. That is the sign that the connective tissue is breaking down, and the flesh is coming loose. We want that.

Sauce or no sauce on the turkey leg

Of course, you have to know that all by yourself. We have cooked them with and without and we like them just a little bit better with sauce. We made a delicious mustard sauce and brushed a thick layer on the turkey legs. You end up with a delicious sticky sauce that you wear proudly from ear to ear. Just take a shower after dinner, and you’re fine. 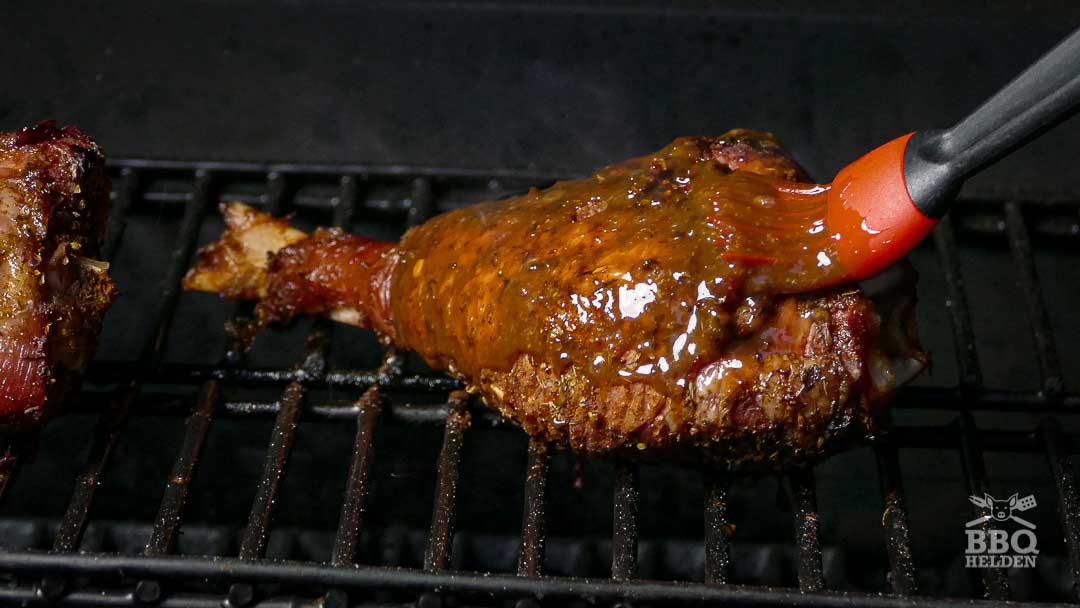 There is a disadvantage by saucing the turkey leg. The sauce takes away the crunchy skin. That is why you have to know for yourself if you sauce or not. The turkey leg is delicious with and without sauce.

This is how you prepare the perfect turkey leg

All in all, it will take you about 4 to 5 hours. But then you have something great. These were big turkey legs, but it could take an hour shorter if you have smaller turkey legs. Just do not pay too much attention to the time it takes. Just make sure you always work with a core thermometer. The core temperature tells you everything about the state of the meat. 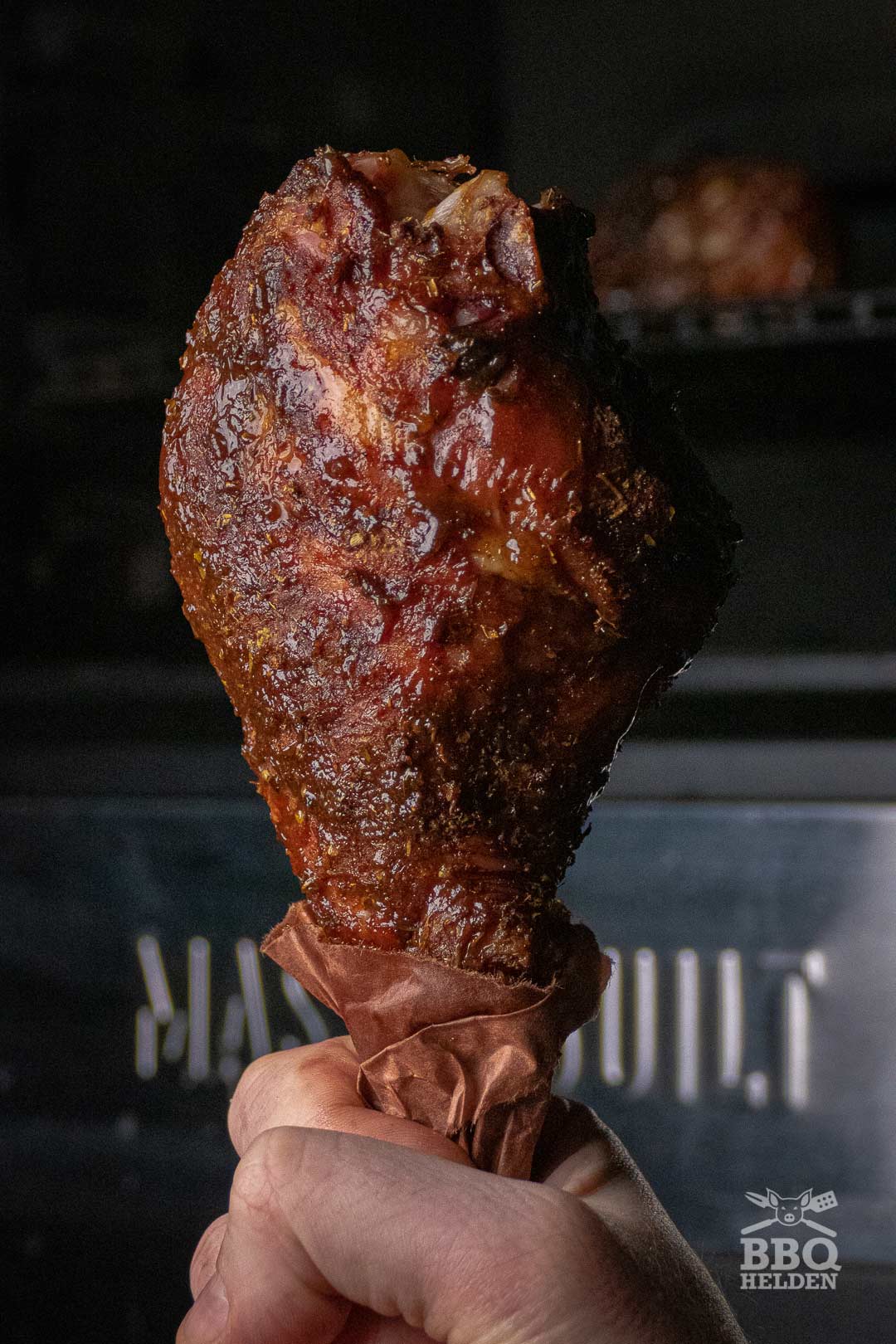 The result is a turkey leg that you can chew off the bone without too much effort. The meat is wonderfully juicy, and it tastes great. One turkey leg is enough for two people or one starving person. Of course, there is something about walking around with such an enormous turkey leg in one hand and a cold beer in the other. And rightly so. You deserve it.