Home How to Our first hot and fast brisket

Our first hot and fast brisket 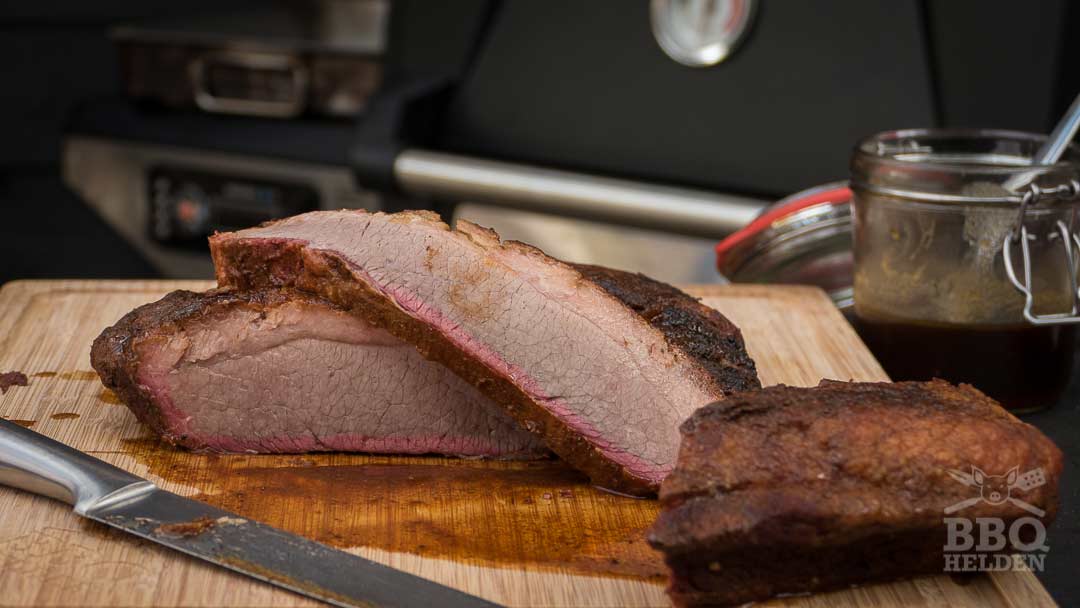 When we heard that many competition barbecuers have been cooking brisket hot and fast nowadays, we wanted to try this too. They serve excellent brisket in 5 to 6 hours and win competitions with it. We are not always fond of competition brisket, but we liked a quick cook.

Our previous low and slow brisket adventure had ended reasonably well, but it could be better in terms of juiciness. After some research, we chose to prepare this brisket hot and fast. This is no recipe but for us, a better understanding of brisket.

Cut the fat cover of the brisket

We bought another flat cut brisket. Firstly, to be able to compare with the previous brisket and it just saves a lot of money. A little experimentation is fun, but you shouldn’t overdo it.

A flat cut brisket is the lean part of a whole brisket. The point is the fat part. In general, the whole packer is used. So that’s both parts at the same time. These are then separated from each other after preparation. We always say that you need fat for real barbecue and yet we choose the flat cut. We like a challenge.

If we are going hot and fast, then we don’t want to prepare much in front. We only slice the thick fat layer. This accelerates the melting and ensures that the rub can penetrate well on that side. We cut the fat crosswise up to the meat.

Then we sprinkle coarse salt on both sides and push it a bit into the cuts. We leave the meat in the fridge for 45 minutes. The salt will extract the surface moisture from the meat. Then the salt is absorbed into that liquid and withdraws into the meat. This is called a dry brine. 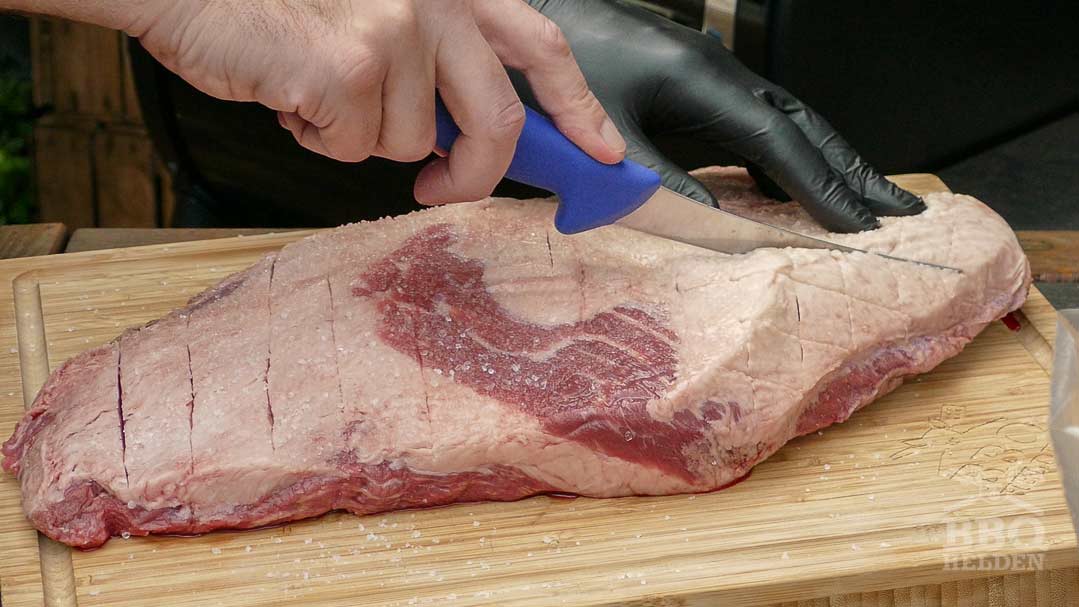 After 45 minutes, you will see that the brisket is wet and the salt has completely dissolved. If we now apply the dry rub, it can adhere well to the meat. We made a rub without salt because the brisket has already absorbed enough salt. There can be a lot wrong with brisket, but you can throw it away immediately if it is too salty. 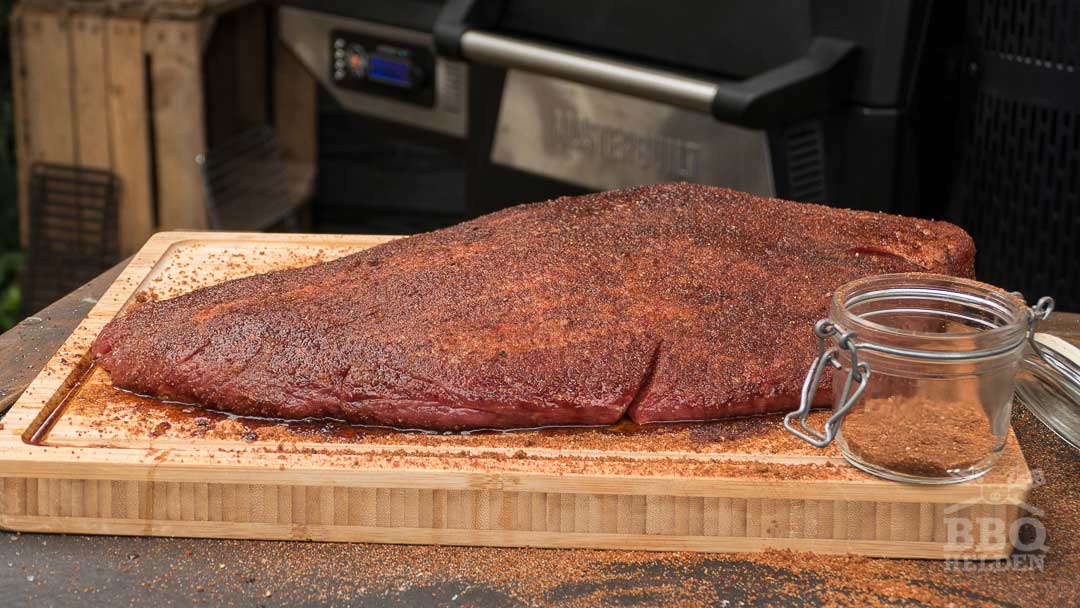 We have got the Masterbuilt smoker to try. This smoker is a so-called gravity-fed barbecue. This system is often used during barbecue competitions, and that is for a reason. You barbecue on lump charcoal with the ease of using an oven. This is a model specially made for the backyard barbecue. Slightly more convenient in size, yet big enough to smoke 8 whole chickens. This is the smoker for your next party. 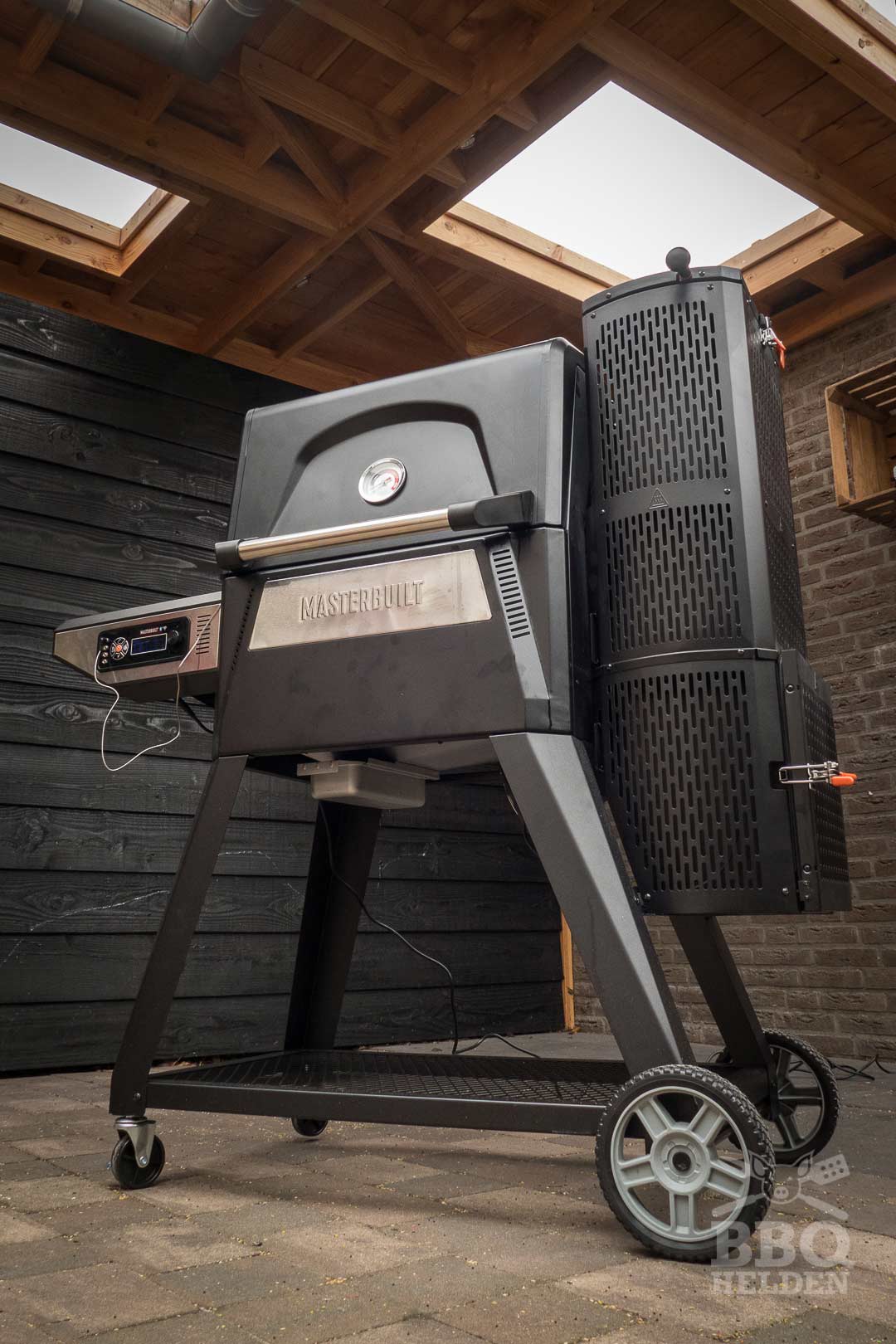 The Masterbuilt smoker is also not picky about fuel. You feed it charcoal or briquettes that are available on every corner nowadays. We do recommend that you look for good quality fuel. Nice hard chunks with little grit give the best combustion. This way, you can easily barbecue for 10 hours.

If you want to keep going for longer, simply top the charcoal hopper up. Because the hopper is lit from below, you can refill without stopping. A fan then ensures that the heat is blown into the boiler. This fan is controlled by a thermostat located in the boiler. 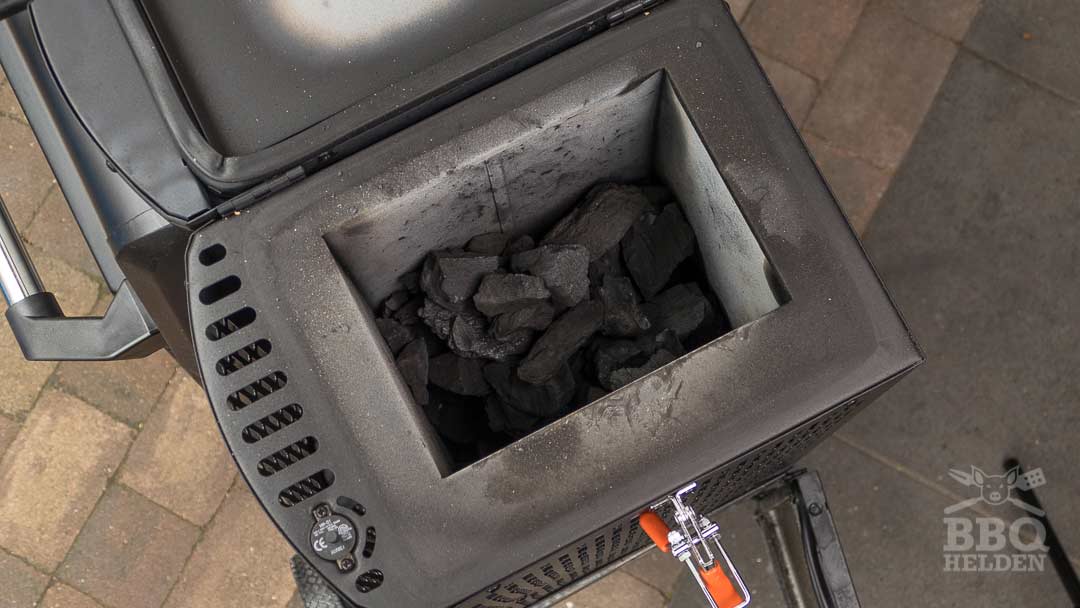 Just put the plug in the socket and set the temperature. This can be done on the smoker itself but also via the app. Here we go for a hot and fast preparation at 150°C (300F). After setting the temperature, you will hear the fan blowing. The temperature in the kettle will then rise to the set temperature. 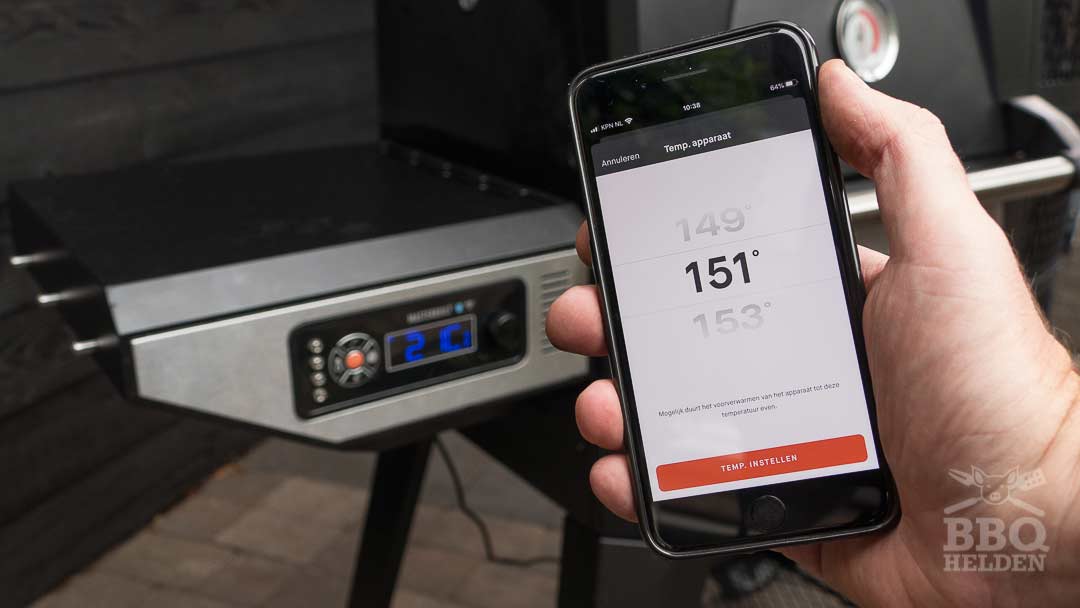 If this does not happen, you have most likely forgotten to remove the valves. You put these valves between the charcoal hopper and the boiler to stop oxygen flow. Without oxygen, the charcoal will stop glowing. You can light the charcoal that you have not used next time. That is sustainable barbecuing. 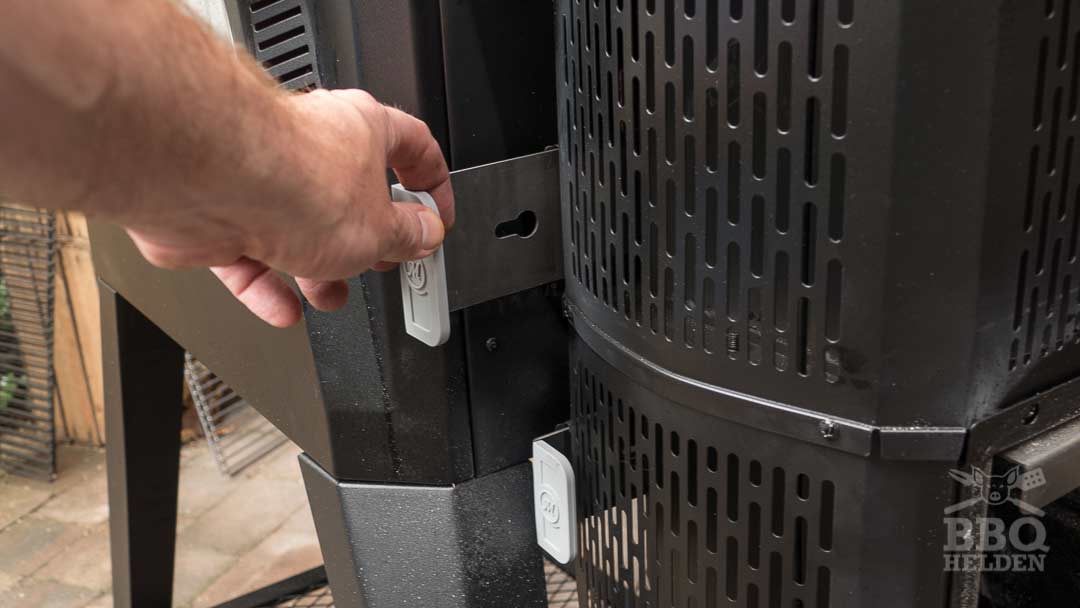 So you have to remove those valves when you start another session. Otherwise, there will be no oxygen flow, and the ventilator will blow for nothing. After a few minutes, the Masterbuilt itself also indicates that something is wrong if the temperature does not rise.

The Masterbuilt gravity series 560 is a great smoker

We always want our lump charcoal to burn or glow without smoke. If we want smoke, we add wood. That’s precisely how the Masterbuilt smoker works. If you wish to smoke, throw a chunk (or more) of smoking wood in the ashtray. 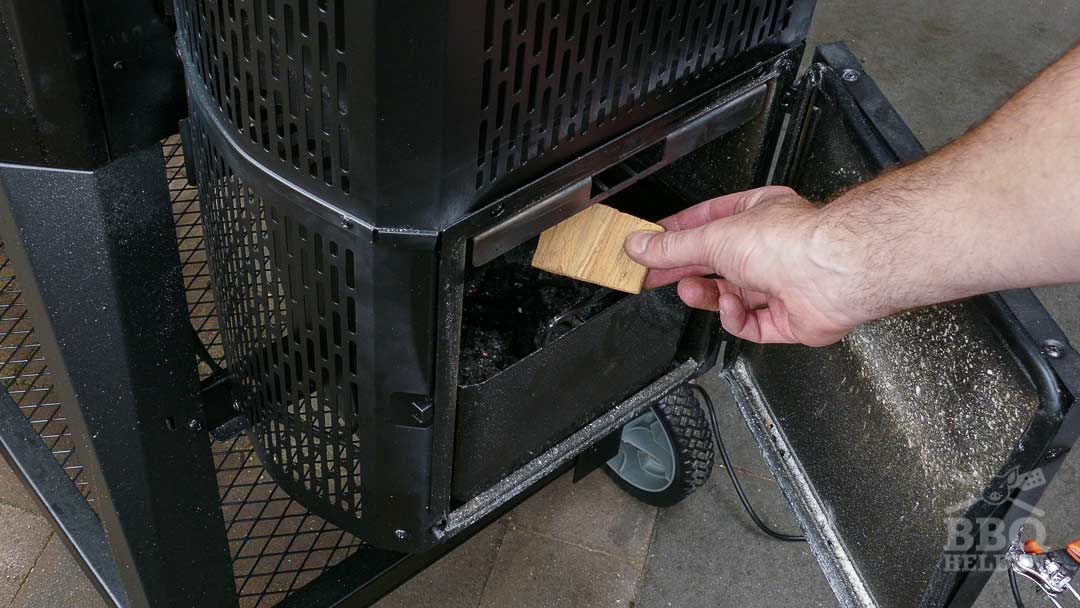 Glowing pieces of coal cause the wood to smolder, and the fan feeds the smoke into the boiler. If you want more smoke, add more wood. If you don’t want to smoke anymore, you can take the block out of the tray. It’s that simple. We use oak as smoke wood. That gives it a heavy smoky flavor that works well with beef.

Fat side up or down

For years it was said that you should have the fat side of the meat up. The melting fat is said to keep the meat moist so that it does not dry out, but that melting fat only lingers on the outside. The meat is very busy pushing moisture out. Most of that moisture consists of water. Water and fat repel each other so that the melting fat never ends up in the meat.

We are going to use the fat differently. That fat protects the meat from overheating. Because the heat comes from the bottom of this smoker and we have the temperature a bit higher than usual, it can use this protection. The intention is for the meat to heat up more slowly without the risk of burning the surface.

The smoker comes with a probe that also allows you to monitor the core temperature of the meat. Both on the barbecue and in the app. We set it to 70°C (158F). The brisket has seen enough smoke, and we are just in front of the stall. 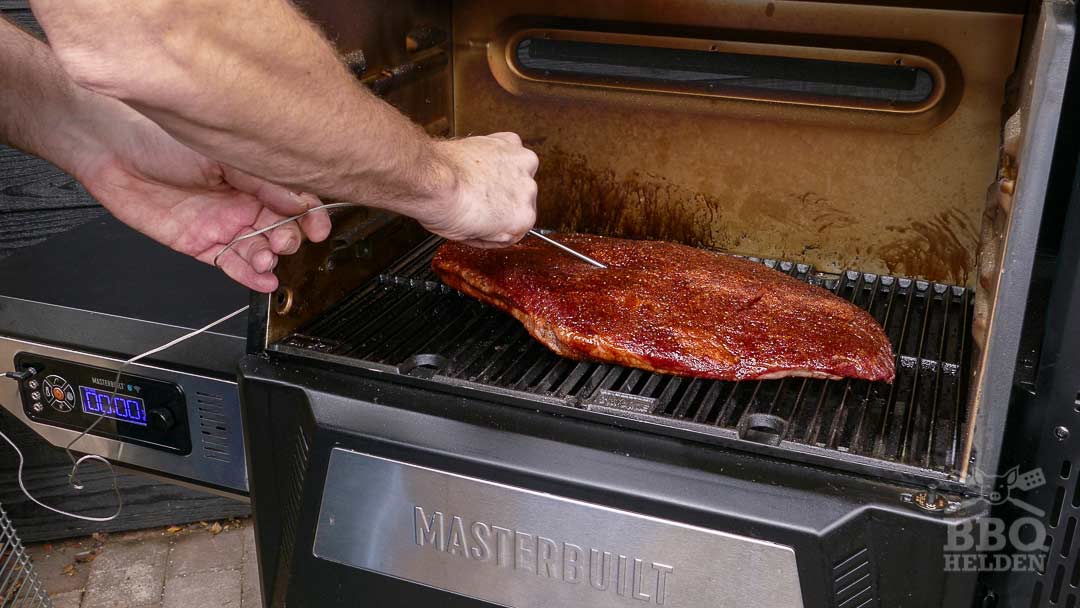 The stall causes the meat to cool down on the surface by expelling moisture. This cooling can take so long that the meat no longer rises in temperature for hours. We went for a hot and fast preparation, so we pack the brisket to no longer cool down.

In hindside, we should have left the brisket in the smoker a little longer. The dry rub had not yet turned into a good crust and was still too moist. One learns by doing. 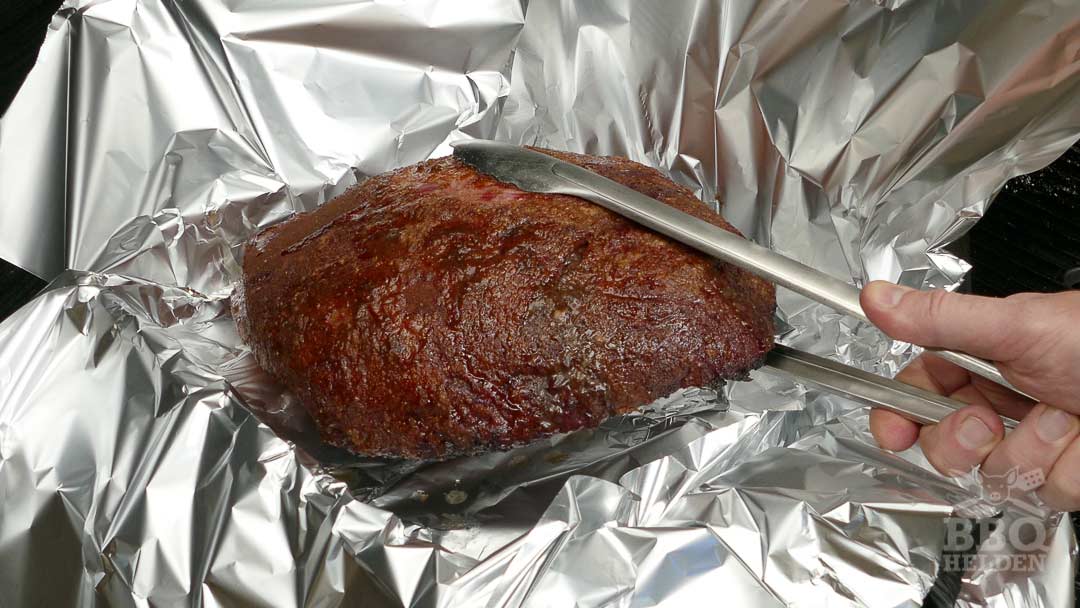 We pack the brisket in 2 layers of aluminum foil. If 1 layer tears, it’s still wrapped. The tightly wrapped meat is returned to the smoker. We put the probe back into the brisket through the foil. Now we are going for a temperature of at least 90°C (194F).

You don’t have to unpack the brisket to see if it is tender enough. You simply insert a thermapen into the meat. This way, you can also check whether the brisket is at the same temperature everywhere. When the probe of your thermometer goes through the brisket like butter, it is ready. We eventually left it in the smoker to a core temperature of 94°C (201F) until we were satisfied. 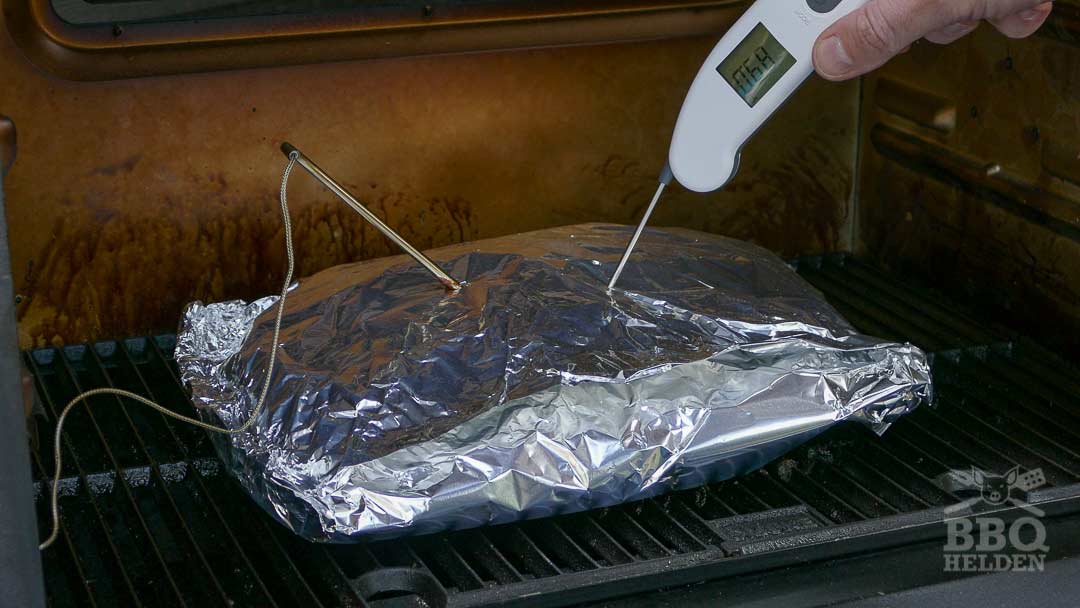 We then put the whole package in an oven tray and open the foil. You let the brisket evaporate for a while so that most of the steam can escape. After that, you rewrap the meat and let it rest. At least half an hour and preferably in a cooler. The longer you can let the meat rest, the more tender it will become. 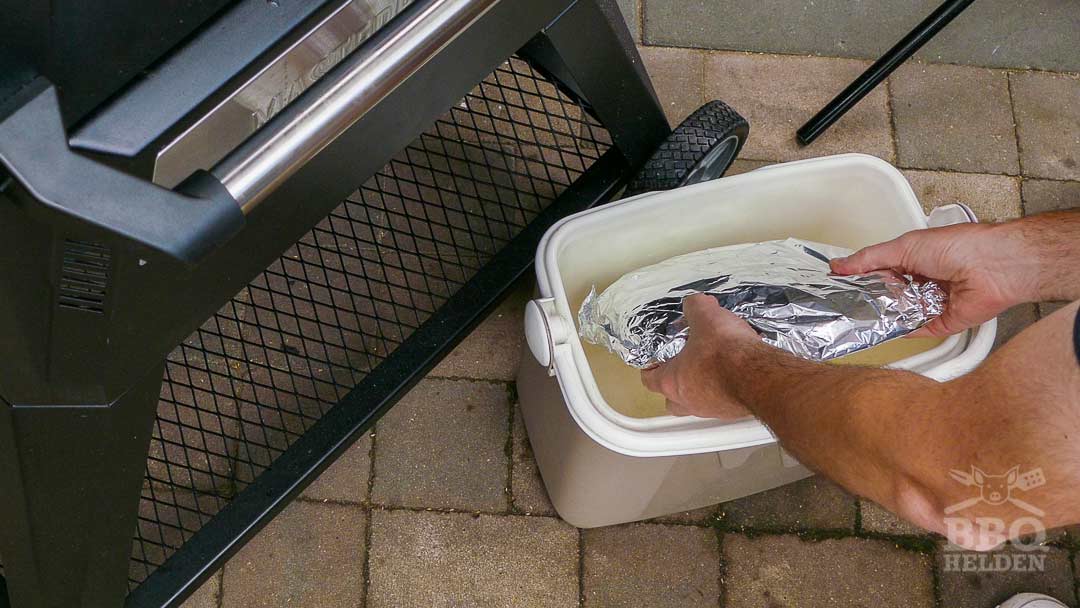 An additional advantage of a cooler is that you can keep the meat warm for several hours. If you are ready too early or your guests arrive a little later, you do not have to worry about serving cold brisket.

We are not going to throw away the juices that have collected in the old aluminum wrapping. We will use that if we want to heat up leftover brisket. It’s a great party if you get rid of 3 to 5 kilos of brisket in one go. There is a good chance that you will have leftovers. 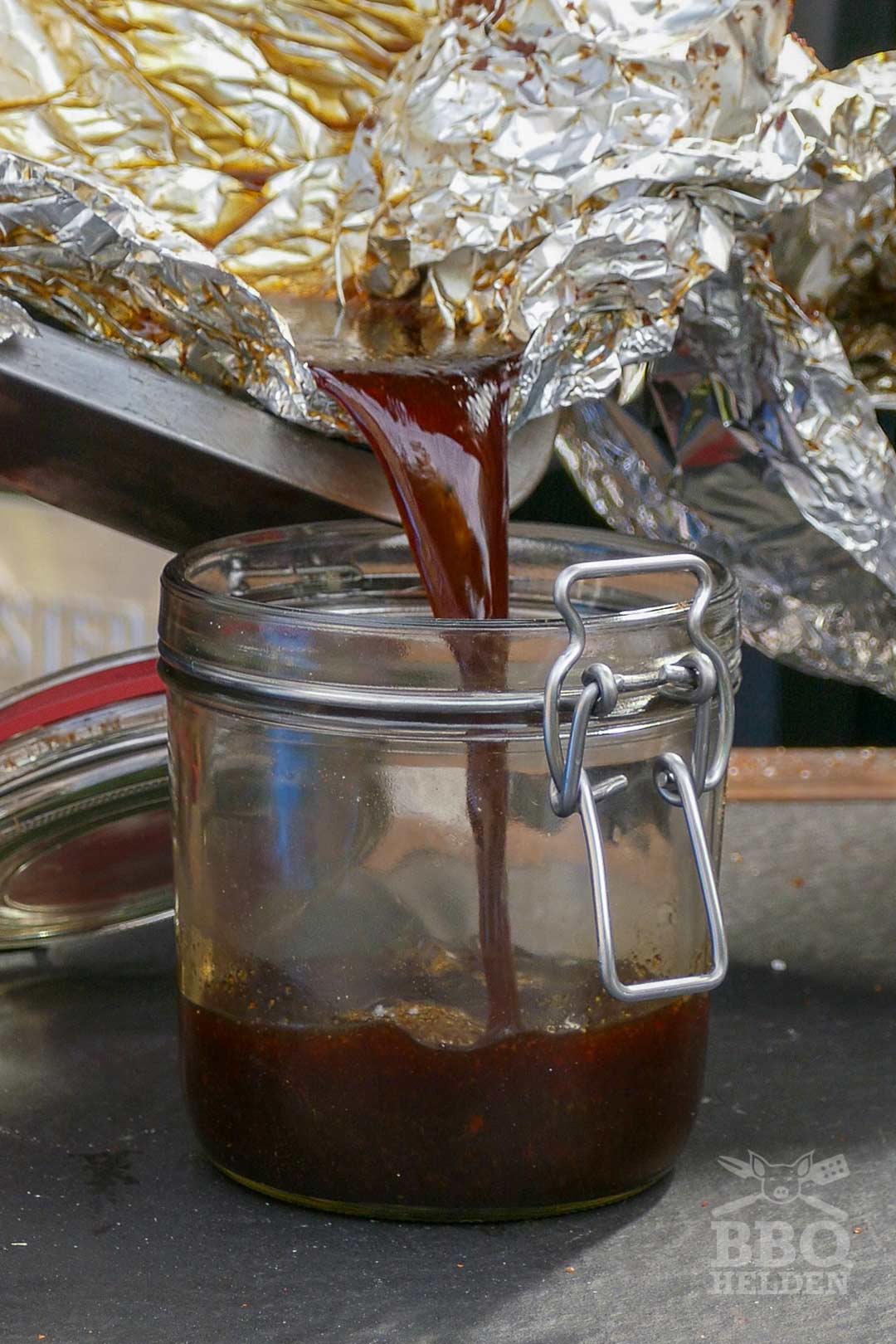 Collect the juice in a clean jar or bottle and put it in the fridge. After a few hours, you will notice a layer of fat on top of the liquid. You scoop this off. What you have left is worth gold. Place leftover brisket in a small bottom with this liquid, after which you heat it up slowly. In this way, the meat remains, or becomes, nice and juicy again. 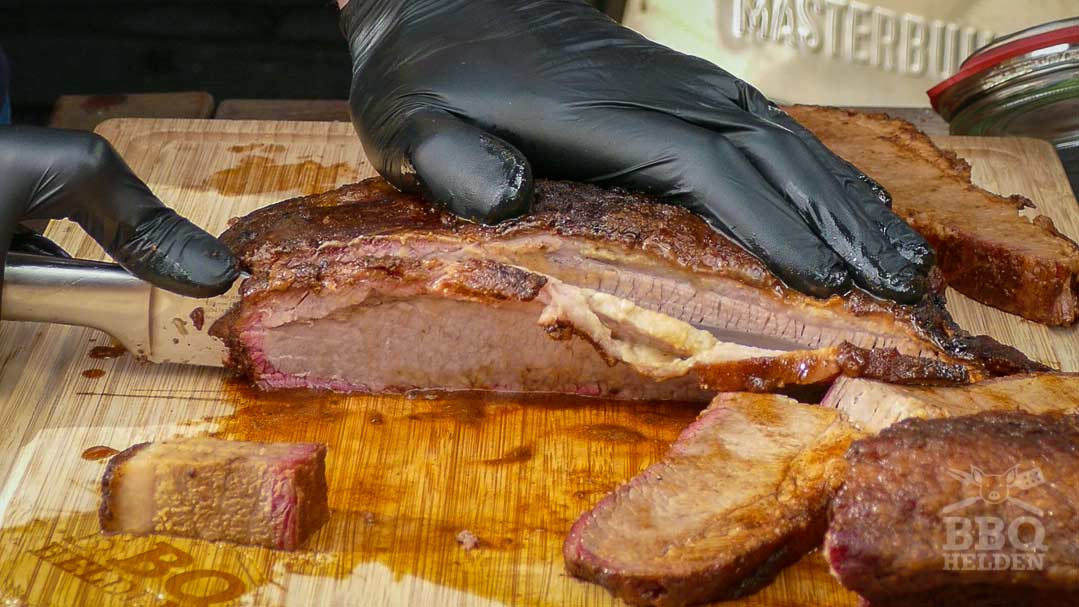 As you can see, this brisket is very juicy. The bark is hardly there. However, the taste is good, and the smoke ring is also clearly visible.

So apart from the somewhat soggy crust, we are actually quite satisfied. We are one step closer to a perfect brisket. Maybe next time we’ll dare to do a whole packer.